Alridge and Nimax Honored as Leaders, Community-Builders in Equity Efforts 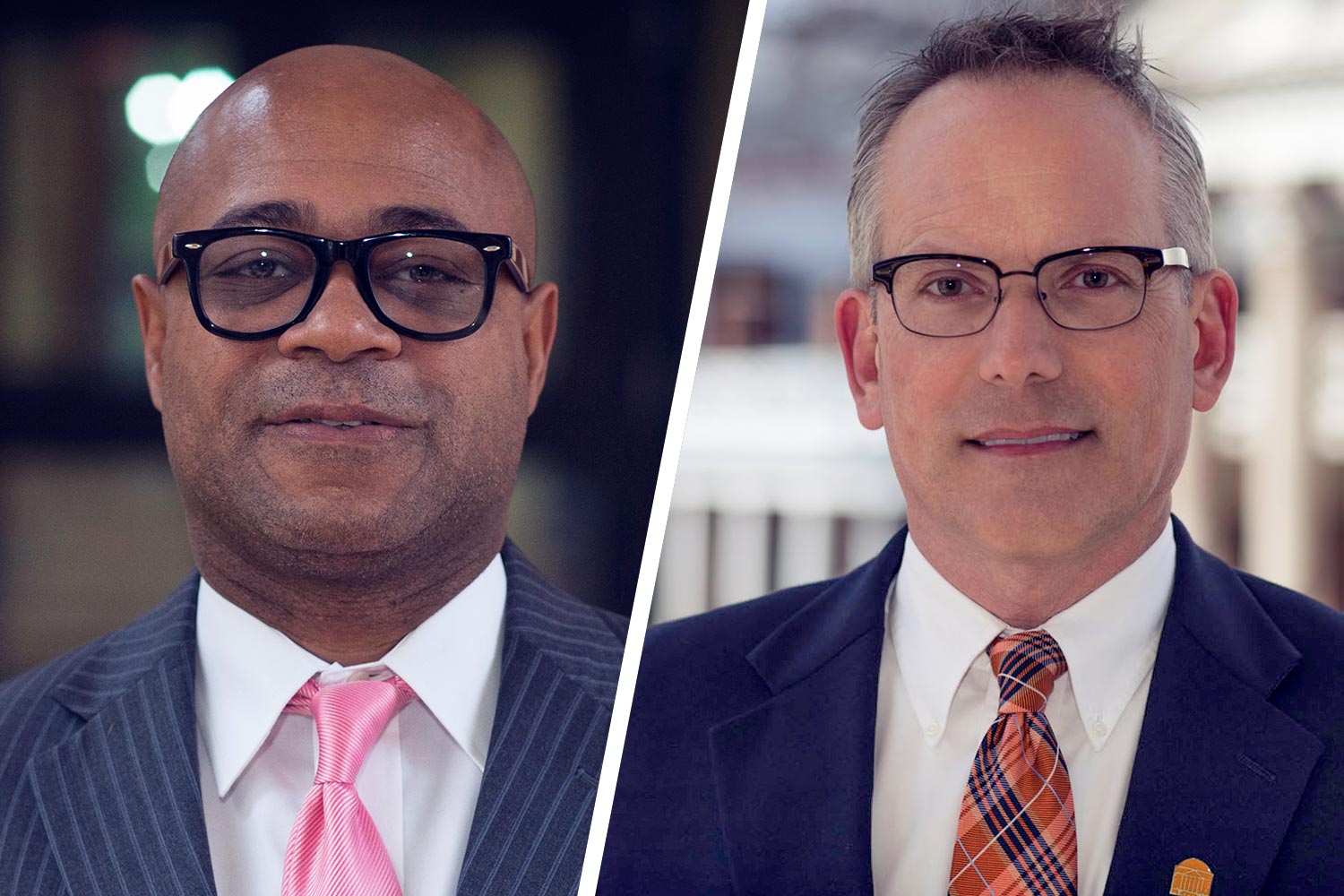 For their distinctive contributions to diversity, equity and inclusion, Curry School of Education professor Derrick Alridge and Assistant Vice President for Compliance Gary Nimax have been selected to receive the University of Virginia’s 2018 John T. Casteen III Diversity-Equity-Inclusion Leadership Awards.

Alridge, who joined the Curry School’s Department of Educational Leadership, Foundations and Policy in 2011, created the oral history project “Teachers in the Movement” to document and disseminate how the pedagogy, curricula and community work of teachers were instrumental forms of activism that influenced the civil rights movement. He also founded and directs a new Center on Race and Public Education in the South, the first of its kind.

Nimax, an alumnus, has worked at UVA since 1989 in a variety of administrative positions, but it is in his role as chair of the LGBT Committee, part of the UVA Diversity Council, for the past seven years in which he has made a major impact in ensuring the LGBT community equitable resources, from benefits to training.

Vice President and Chief Officer for Diversity & Equity Dr. Marcus L. Martin said evaluating the strong nominations this year “provided a view of the outstanding diversity, equity and inclusion efforts by many committed individuals at the University.”

“Gary Nimax and Derrick Alridge both exemplify leadership and exhibit deep commitment and distinct passion for diversity, equity and inclusion,” he said. “Their diligent efforts are providing sustainable and quantifiable impacts on our University and community.”

Both are advocates for diversity and inclusion at UVA and ambassadors to the community. They are tireless mentors. They show patience and empathy in listening to others and bring people together to create strong networks and make things happen.

The 2018 award winners will be recognized Friday during the ninth annual awards recognition luncheon.

Alridge promotes the significance of the civil rights movement and civil rights in American education through his research, teaching, public service and participation in University life.

Since he came to UVA, he has built a widely recognized oral history project, “Teachers in the Movement,” documenting the stories and reflections of educators across the American South and analyzing the significance of their lives and work for educational equity. He has also brought undergraduate and graduate students into this research.

His nominators, Curry School Dean Robert Pianta and two colleagues – Michelle Young, chair-elect of Educational Leadership, Foundations & Policy, and Juan Garibay, assistant professor of higher education – noted that Alridge’s project has “received significant grant funding, which is not typical for educational historians,” including a Cavalier Achievement Award from the Executive Vice President and Provost’s Office in 2015.

Colleague Patrice Preston Grimes, an associate professor in the Curry School as well as an associate dean in the Office of African-American Affairs, said, “Derrick Alridge’s commitment to diversity, equity and inclusion is longstanding and unwavering. Since meeting as novice scholars over 15 years ago, I have seen Derrick emerge as a leading national intellect, whose work provides the tools for educators to create a more complete curriculum and praxis in K-12 schools across the country.”

In his latest venture, he is expanding this research area in the new Center on Race and Public Education in the South, the first of its kind, which he is currently directing. The center, founded in 2017, aims to bring researchers and local communities together to examine the intersection of race, education and schooling in the South, with a particular focus on barriers to and supports for the achievement of educational equity and excellence, and ultimately to influence education policy.

His contributions to diversity and equity also extend into his teaching, his nominators wrote. “His courses, which include the history of African-American education, multicultural education, the civil rights movement and education, and hip-hop, history and global movements, engage students in explorations of race and the struggle for civil rights in education.

“Without question, students leave his course with a deeper understanding of educational equity.”

Among his professional activities on Grounds, he is a member of the President’s Commission on Slavery and the University and affiliated with the Carter G. Woodson Institute for African-American and African Studies.

Longtime Curry School professor Stanley Trent mentioned a unique connection that he has with Alridge and his Teachers in the Movement project.

“In the near future, we will be interviewing my aunt, who was one of the few African-Americans in Virginia to maintain her status as principal versus an assistant principal during the desegregation process,” he said. “Hence, there are both academic and personal reasons why I am so honored to be a part of this project. This work is so important because the stories about the practices and pedagogy of these teachers may help us understand what we need to do to improve educational and post-secondary outcomes for our children.”

English professor Victor Luftig, who directs the Center for Liberal Arts, which provides continuing education to practicing teachers in the commonwealth, wrote that he has worked with Alridge several times. Recently he had the opportunity to participate in some teacher interviews for the Teachers in the Movement project and “saw him in action with his team. I am invariably moved by Professor Alridge’s combination of dedication and wisdom; and … I have seen him move others, from a wide range of audiences. He is a wonderfully exemplary educator and a splendid representative for the University in many settings.”

Beyond his professional activities, he personally touches individual lives, as those supporting his nomination for the award described in more than 15 submitted testimonials. Several were from former students who said they have found success and satisfaction in their subsequent careers due to Alridge’s encouragement and support.

Another colleague, associate professor Joanna Lee Williams, is collaborating with Alridge on the Center on Race and Public Education in the South. A developmental psychologist whose research focuses on race and ethnicity as social contexts for youth development, Williams said Alridge builds community in various ways, from inviting colleagues for dinner at his home to reaching out to the Jefferson School African-American Heritage Center.

“Derrick frequently engages these local stakeholders in events hosted by the University, serving as a model for public scholarship,” Williams wrote.

Carol Ann Tomlinson, chair of Educational Leadership, Foundations & Policy, sums up why so many respect and appreciate him:

“Alridge is courageous in standing for the principles of equity and inclusion, but is simultaneously a calming influence in chaotic times because of his own centeredness, dignity and skill as a listener. He is one of the very finest human beings, educators and academics I have had the opportunity to work beside in a 50-year career in education.”

About this office, its website says, “The University’s institutional compliance program provides oversight of individual compliance requirements in specific functions of the University.” In his job, Nimax must be committed to “the highest standards of ethics, integrity, and lawful conduct by promoting adherence to all applicable laws, regulations, and policies.”

In his time leading the UVA Diversity Council’s LGBT subcommittee since it was established in 2011, he has shown an equal measure of integrity with his commitment to diversity, equity and inclusion as a citizen and ambassador of the University.

“The committee, under Gary’s strong leadership … has numerous accomplishments related to LGBT community-building, benefits, training and outreach, and faculty, staff and student surveys,” wrote nominator Virginia Evans, UVA’s chief information officer, who has worked with Nimax since the 1990s and also is on the LGBT subcommittee.

Committee member Alexandra Rebhorn, communications manager in the Office of the Executive Vice President and Provost, wrote, “Gary saw a need at UVA and decided this was the time to fill that need. From the moment he took the helm as chair, he has worked tirelessly to ensure that the committee has had real impact, as well as providing a forum and a ‘safe space’ to discuss issues affecting LGBTQ faculty, staff and students.”

The list of that group’s accomplishments since it formed about seven years ago is impressive, leading to “significant impact for the LGBTQ community,” Evans wrote.

Under Nimax’s leadership, the committee advised the Faculty Senate on adding demographic questions about sexual orientation and gender identity to its 2012 survey. Results on overall satisfaction of LGBT staff showed no statistically significant differences in any area other than benefits – and this survey was conducted prior to marriage equality.

In anticipation of the Supreme Court decision two years later that legalized same-sex marriage in Virginia, Nimax worked with University Human Resources to enable UVA to offer benefits to same-sex spouses within 24 hours after the ruling.

Also in 2014, he worked with UVA’s Office for Equal Opportunity and Civil Rights to incorporate “gender identity” into the University’s non-discrimination policy.

The LGBT committee has worked with several other units and departments on Grounds to promote awareness of LGBT issues: with the Faculty and Employee Assistance Programs, to develop employee training on gay and transgender issues; in conjunction with event organizers, to publicize LGBT-oriented content in the Virginia Festival of the Book and the Virginia Film Festival; and with UVA leaders, to include LGBT history at UVA in bicentennial observances and in the Albert and Shirley Small Special Collections Library’s 100 Objects Exhibit.

Nimax discussed with Institutional Assessment & Studies which questions about sexual orientation and gender identity should be included in the “Student Experience in the Research University” survey, allowing UVA to track results with peer schools over time. He also developed proposals for the Student Health Insurance Committee to add domestic partner benefits in 2014 and fully inclusive transgender health coverage in 2016.

The LGBT committee now holds an annual welcome reception for new LGBT faculty and staff; collaborates with the University’s LGBTQ Center for students, with cross-representation between the LGBTQ Center advisory board and the LGBT committee; and has established a UVA presence at the annual C’ville Pride Festival.

“In addition to his official UVA and community work,” Evans wrote, “Gary has also volunteered countless hours of his personal time in support of the LGBT community. He has participated on LGBT panels and discussions in University classes and alumni weekends, sharing his ‘coming-out’ story and advising students who had personal and career questions.”

Another longtime colleague, F. Aaron Laushway, associate dean of students, who has known Nimax since 1996, wrote, “He has been an extraordinarily patient, seemingly indefatigable leader, ensuring that all voices and opinions are given fair and equitable hearing. He is omnipresent in activities, both on the Grounds and in the city.”

Nimax engages in all these activities with compassion, a willingness to listen and energy for problem-solving, his nominators wrote.

Joy Pugh, who directs the Virginia College Advising Corps and was previously coordinator of UVA’s LGBT Resource Center, has witnessed something else about Nimax: “his big heart for our students.” His attendance at student-led events “makes a difference for all students, but particularly those in the LGBT community who may be looking for role models and mentors to acknowledge and celebrate them as full members of our community.”

Q&A: Assessing the Risks and Rewards of Pelosi’s Plan to Visit Taiwan END_OF_DOCUMENT_TOKEN_TO_BE_REPLACED

These Giant Wind Turbines, Inspired by Palm Trees, May Be the Future of Renewable Energy END_OF_DOCUMENT_TOKEN_TO_BE_REPLACED