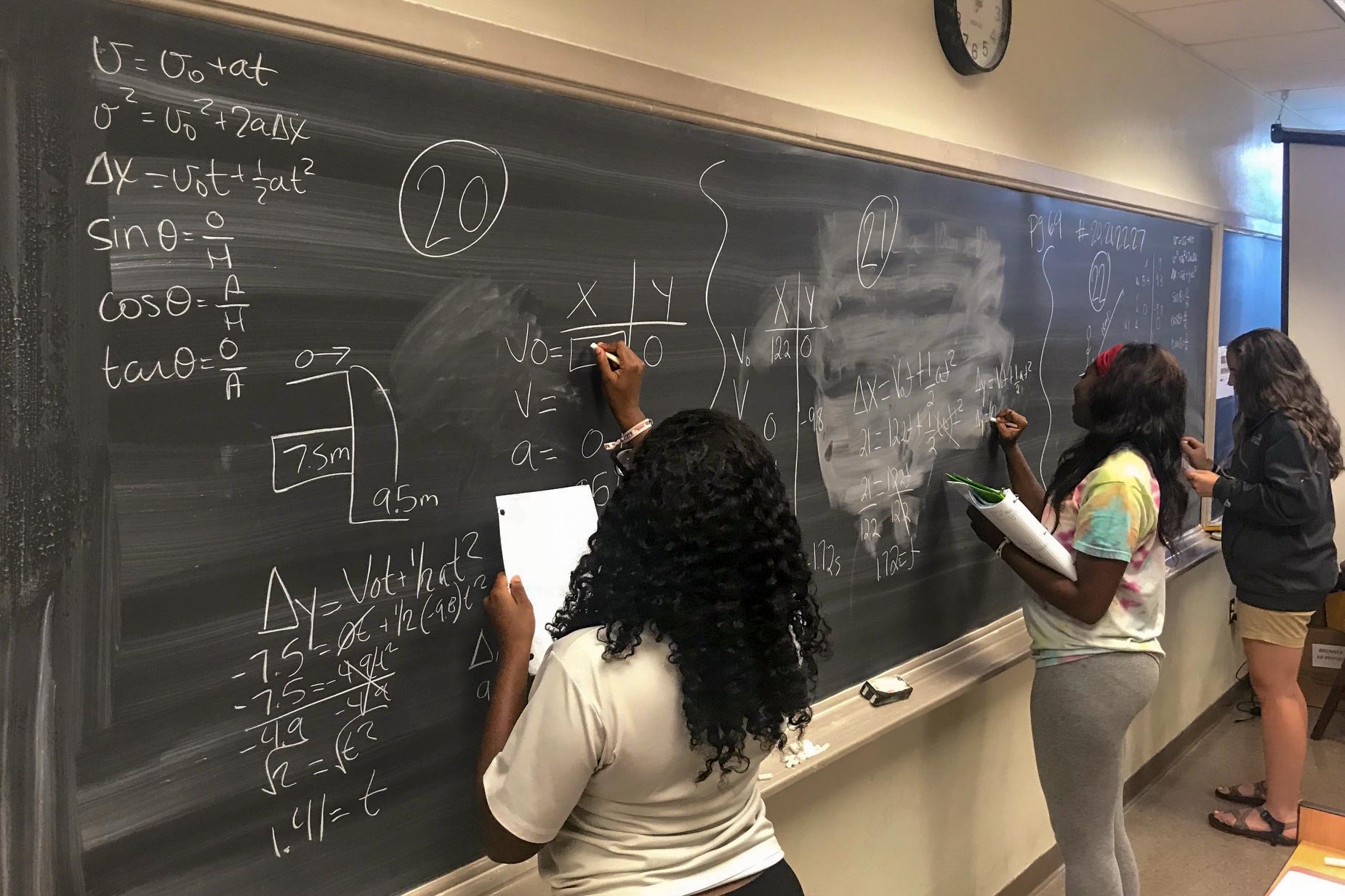 High school juniors in Mississippi work on problems in their AP physics class, which is supported by tutoring from students from the University of Virginia and other top-level colleges around the country. (Photo courtesy of the Global Teaching Program)

Across the U.S., high school students who have the aptitude and work ethic to do well in advanced courses often do not have access to the classes they need to achieve their full potential.  That problem is most acute in rural, low-income and high-minority communities.

An innovative pilot program launched by UVA alums, now in its second year, has made significant progress in addressing the disparate access to advanced courses in rural Mississippi. The Global Teaching Project provides promising high school students in rural, low-income communities access to the advanced courses their schools otherwise could not offer, due both to a lack of resources and a chronic and worsening shortage of qualified teachers.

Founder and CEO Matt Dolan, who graduated from the School of Law in 1986, conceived the Global Teaching Project as a means to provide underserved students the same educational opportunities that he and his wife, MaryEllen, a 1987 Law School graduate, sought for their own children, including daughter Nora, who graduated from the College of Arts and Sciences last year and is now working with Teach for America.

The first person Matt Dolan spoke with about the project was his UVA School of Law classmate, Todd Wagner, a pioneering technology entrepreneur who has long been deeply involved in efforts to help disadvantaged students succeed academically.

“Todd understood the enormity of the task, but he also recognized its importance,” Dolan said.  “He agreed to be part of our effort – without his input, we could never have gotten off the ground or remained in business.”

The pilot program’s inaugural course is AP Physics 1, a subject chosen at the urging of Mississippi school superintendents, who cited a particularly severe shortage of teachers in that subject. Mississippi education officials note that, in a typical year, the state colleges and universities may produce a single physics teacher for the state’s 130,000 public high school students.

To help implement the course, Dolan turned to UVA physics department chair Bob Jones, whom Dolan knew from their days together as students on Grounds. Jones, in turn, helped recruit UVA undergraduate physics majors to serve as tutors. “I am from Louisiana, so I know the challenges these areas face,” Jones said. “We have remarkable physics students here at UVA, and I knew that their involvement would benefit these high school students immensely.”

One of those students is second-year physics major Dominic Pinnisi, who began tutoring students last fall. “We meet every Monday and Wednesday morning on Google Hangout,” he said. Pinnisi, who is one of 12 UVA students who have tutored with the Global Teaching Project, works with juniors from Scott Central High School. 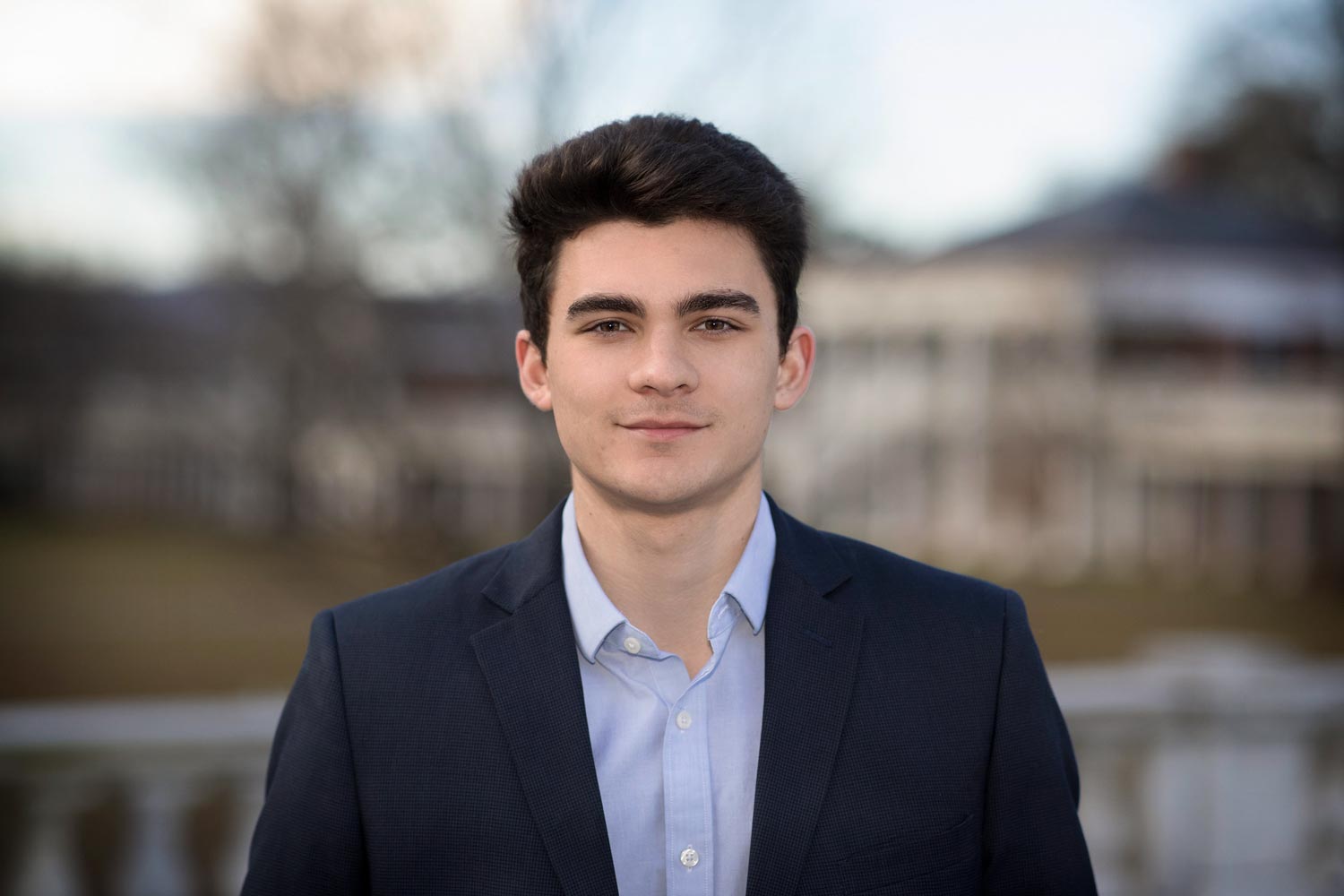 “I had a top-notch education in high school and when I spoke with Matt on the phone and he told me all these statistics about educational disparities in the U.S., not everyone knows that.

“There are people who graduate from high school…without having taken physics and that’s actually really concerning,” he added. “So it’s definitely fulfilling.”

Though students from several universities – including MIT, Stanford and Yale – have served as tutors, more tutors have been from UVA than any other school.

Another of those tutors is physics major Megan Kenny, also a second-year student.

Kelly Matthews, a teacher from Pontotoc County, recently wrote to the Global Teaching Project about Kenny. “I just wanted to brag on Megan,” whose work the teacher described as “pretty spectacular.”

The students receiving the tutoring have also expressed their appreciation.

Cameron Wilborn, a member of Palmer High School in Marks, Mississippi, class of 2018, now attends Jackson State University, where he plans to study engineering. While in high school, he worked with tutors from UVA.

“I am glad that I did this, because I know to be an engineer in college, I will have to take physics,” he said. “This gets my feet wet and prepares me for the future.

The course, he said, “gives you that ‘college feel.’”

“We were confident that the UVA tutors would do a great job teaching physics,” Dolan said. “What we did not anticipate is the value they would bring as role models. They have opened a new world to our students, who have learned not just the subject matter, but also what it takes to excel academically.”

UVA physics alumni also have gotten involved. Lex Lindsey, a Mississippi native who earned his degree in 1976 and also serves on the UVA Arts Council, has provided critical support and key insights from decades of work on improving education in Mississippi.

The program’s blended classes feature a lead instructor who is an experienced teacher and subject matter expert, and presents material largely through video, but also interacts directly with students. In-class instructors build on the subject matter taught by the lead teacher. Mississippi-based, AP-certified Supervisory Teachers support in-class instructors with detailed course outlines and teaching guidance. Tutors from UVA and other prominent universities are assigned to each class and conduct regular videoconference tutoring sessions. Students also are provided with leading textbooks, workbooks and substantial online resources.

In addition, students are prepared for the rigor of the AP curriculum through university-based, residential summer and spring programs at Mississippi State and the University of Mississippi, where they work with faculty and tutors in an immersive math and science learning environment to develop the substantive foundation and study skills needed to succeed.

In the 2017-2018 academic year, the program successfully increased the number of Mississippi public high schools offering AP Physics 1 by 30 percent.

Last May, students from participating Mississippi schools took the AP Physics 1 exam – a challenge that less than one-third of 1 percent of Mississippi public high school students took on. In each case, those students were the first ever at their schools to take that exam.

Though, as Dolan readily acknowledges, many impediments have not yet been overcome, progress is real. For example, Mississippi State recently reported that students in the project’s summer preparatory program “achieved dramatic gains in substantive understanding of course content, according to nationally recognized pre- and post-program assessments utilized by the American Association of Physics Teachers.”

In the National Eye and Growing the Program Globally

The Global Teaching Program’s efforts in Mississippi have drawn national attention. In October, U.S. Secretary of Education Betsy DeVos came to Holmes County, among the most impoverished of Mississippi’s 82 counties, to observe the program and assess its potential for scaling broadly. DeVos lauded its “creative approaches to connecting students and mentors,” which she called “terrific.”

The Mississippi initiative continues to add districts – several joined this year and several more will participate next year. The Global Teaching Program also is working to implement additional courses.

GTP also is looking to establish its AP access program in underserved areas beyond Mississippi.  “Our mission is to provide help wherever it is most needed,” Dolan said.

Dolan noted that, among the 435 congressional districts in the United States, five of the six most economically distressed are in two geographically contiguous clusters – the Mississippi Delta and the part of Appalachia where Kentucky, Virginia and West Virginia meet. “We hope that, with the help of UVA, we may be able to make a positive difference in those areas as well.”

The Global Teaching Program also has begun work internationally. It recently created a biology course in India, which has, by far, the world’s largest school-age population, and has entered into an agreement with an Indian education provider to implement the course. To help encourage women to enter into science, technology, engineering and math in a country with one of the world’s lowest female workforce participation rates, the biology class featured a female biochemist as lead instructor and was produced with a class comprised entirely of female students.

“UVA provided my family an excellent education,” Dolan said. “We want as many students as possible to have the same opportunities.”