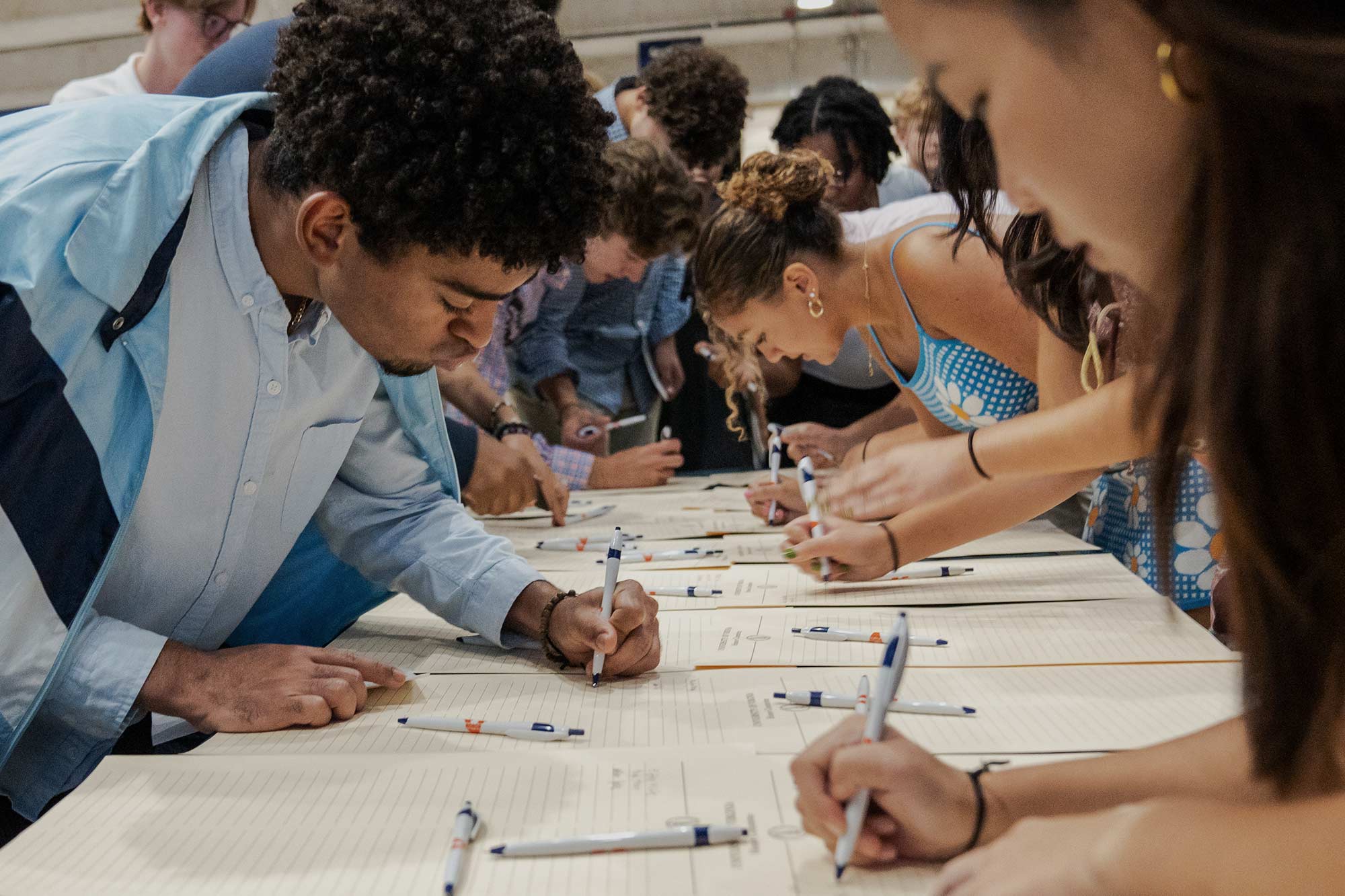 Honor looms large at the University of Virginia.

Spectators at Saturday’s Homecomings football game against the University of Louisville saw that for themselves in 32- by 57-foot high definition. Early in the second quarter, Scott Stadium’s Hoo Vision broadcast students and alumni discussing, of all things, the values and impact of honor at UVA.

The 30-second clip offered just a taste of an ambitious new initiative the UVA Alumni Association has undertaken, called “Living Honor.” The project seeks to stimulate honest conversations across the University community about the ideals of honor in UVA life and the life that comes after graduation.

Over the past year, the Alumni Association has brought together alumni and students for a series of one-on-one conversations about what it means to live one’s life committed to the principles of UVA honor. In August, the association launched the Living Honor website. It includes, among other content, a series of short videos from those discussions, organized by topics, such as how individuals define honor, the meaning of a “community of trust,” and how those values carry forward after college in personal and business dealings.

“There’s always that level of trust that you have with a UVA alum that you wouldn’t necessarily have with someone else,” commercial litigator and former Honor Committee member Kennon Poteat, a 2001 graduate of the McIntire School of Commerce, says to current Honor Chair Gabrielle Bray in one of the segments. “You just start with the assumption that they’re going to behave ethically and with integrity.”

The University showed a four-minute package of that and other Honor dialogues between a current student and a former one during first-year Convocation in August.

The Alumni Association undertook the project at the request of University Rector Whittington W. Clement and President Jim Ryan, both UVA alumni. It followed a December Board of Visitors meeting, which featured an honest conversation about honor at UVA. Board members discussed the Honor System in the runup to the historic student vote in March, which repealed the 180-year rule that convicted offenders had to leave the University for good.

The Living Honor project operates at the aspirational level, purposely staying above debates about the Honor System’s form of punishment or its operating procedures. Living Honor focuses instead on “the Honor Spirit,” the foundational values of ethics, integrity and community trust.

In their query to Alumni Association President and CEO Lily West, Clement and Ryan noted growing alumni concerns that the Honor System “is not as central as it once was” to the student experience and alumni perceptions “that students and faculty do not take the concept of Honor as seriously as they did in the past.”

The current issue of Virginia Magazine, published by the Alumni Association, investigates those issues at ground level in the cover story “Honor Up Close: What we discovered when we took an honest look at the Honor System.” Among other discoveries, the piece found the original articulation of “the Honor Spirit.” It comes from an uncannily insightful, and soon forgotten, outside consultant’s report from 30 years ago.

Clement and Ryan suggested the association create an honor orientation video. Living Honor did that and more – not just a single video, but a series of them, along with a dynamic website to host them. There’s more to come. Living Honor’s next steps will include meeting with partners across Grounds to create productive ways for students, faculty and others to engage with the Honor Spirit and, ultimately, to strengthen UVA honor.

“We’re a natural fit for the assignment,” West said. “We’ve worked to support the Honor System throughout our history, which is even older than the Honor System’s. It’s no coincidence that the Alumni Association’s statement of values begins with the commitment to conduct ourselves ethically and with honor.”

The Alumni Association stewards the Honor Endowment, an important resource to decades of Honor Committees. Through Reunions and other events, it convenes meaningful discussions about honor. Virginia Magazine continues to cover the Honor System, West said, including on some of its most difficult subjects.

Look for a rebroadcast of the Living Honor 30-second video at the Cavaliers’ Family Weekend football game against the University of Miami on Oct. 29.