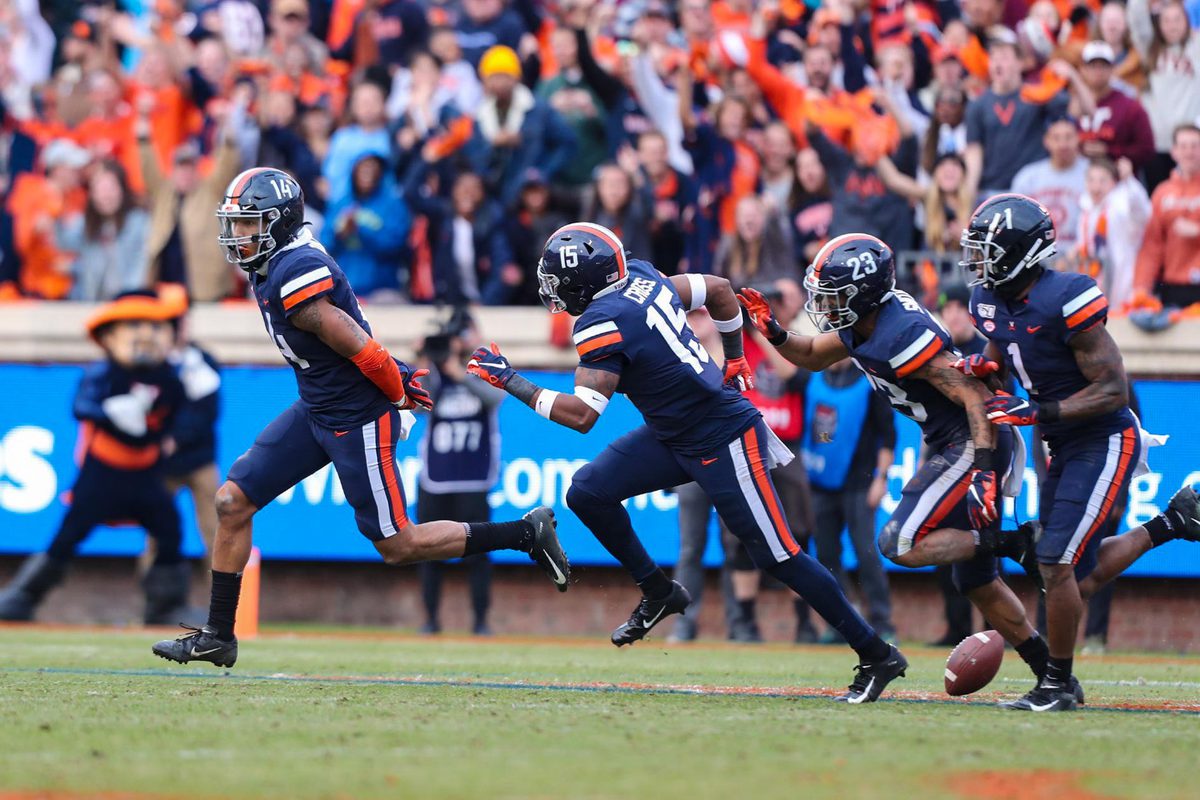 The numbers inspire awe. The University of Virginia’s next football opponent, Clemson University, is on a 27-game winning streak. The Tigers have captured four consecutive Atlantic Coast Conference titles and two of the past three national championships. They haven’t lost since Jan. 4, 2018, when Alabama defeated them in the national semifinals.

As is usually the case when they take the field, the third-ranked Tigers will be favored. In a teleconference Sunday with the two head coaches – UVA’s Bronco Mendenhall and Clemson’s Dabo Swinney – a reporter likened the matchup to David versus Goliath.

Mendenhall, who preceded Swinney on the conference call, understands why some might see it that way. But he’s excited about the challenge facing his team, which on Friday defeated its archrival, Virginia Tech, for the first time since 2003.

Asked by a reporter about the "daunting" task of taking on the Tigers, Mendenhall said, “I don’t see the word as ‘daunting.’ I see an amazing opportunity. … I see an amazing chance for my team, my coaches and my staff to try as hard as we can try to learn, grow, develop and compete. That’s what we intend to do.” 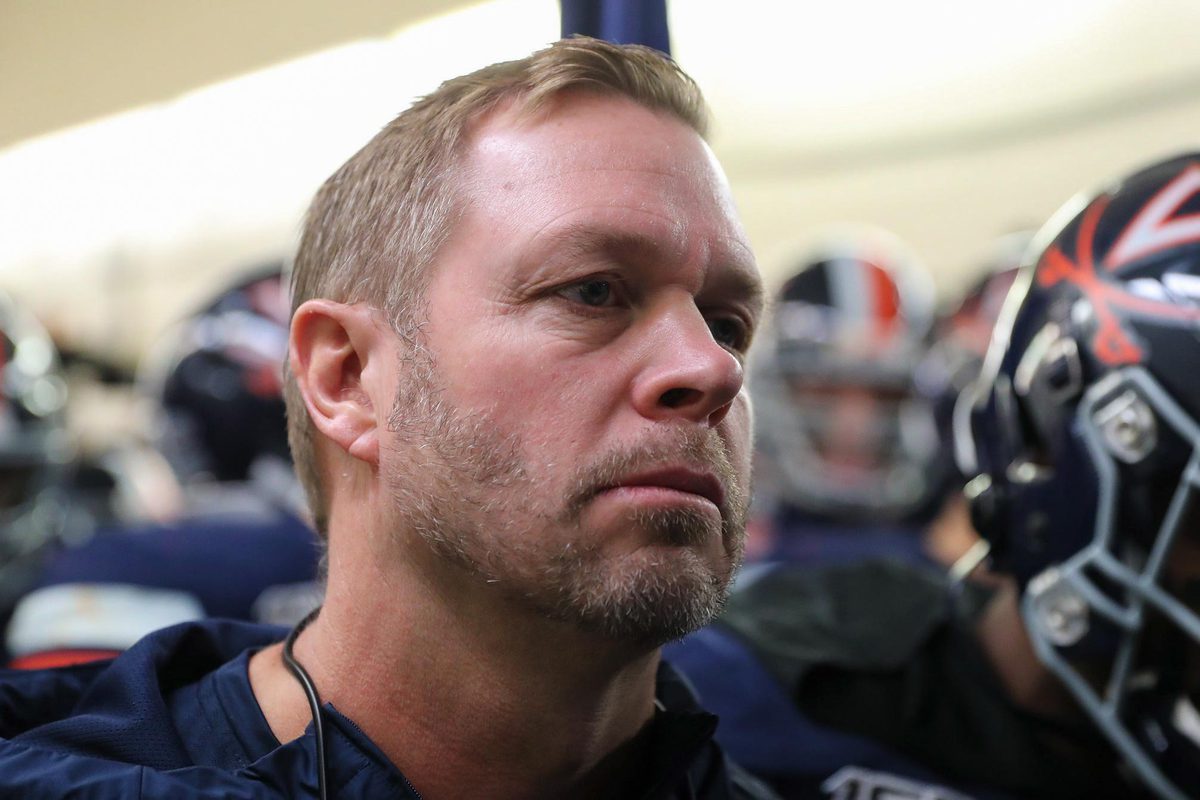 Due to shifts in ACC football scheduling, UVA hasn’t played Clemson since 2012, when Mendenhall was head coach at Brigham Young University. Under Mendenhall, the Wahoos have posted records of 2-10, 6-7 and 8-5, respectively, and with two games remaining this season they could reach the 10-win mark for only the second time in program history.

Swinney said it’s “really an incredible journey that they’ve been on since Coach got there. It’s been fun to watch. You could see this coming, as far as them building a championship program.”

Mendenhall said: “Each year has brought new steps and new challenges and new opportunities for growth and development. This stage and this step is the next in our process and our progress. We’re looking forward to it. We’re certainly anxious to play and represent our school, our institution and our side of the league in the best way that we can.”

The Coastal Division consists of seven teams. With its win over Virginia Tech, UVA became the last of the seven to win the Coastal. (Not since 2010 has a Coastal team been crowned ACC champion.) The No. 22 Cavaliers are familiar with Bank of America Stadium, having defeated the University of South Carolina there, 28-0, in last year’s Belk Bowl, but “this stage is a different stage,” Mendenhall said.

“It’s a new step for the program. Our program, there’s a newness to it, an excitement about it, a hungriness that radiates from our team right now and their desire to do really well in this game. In terms of points of reference, no one on our team has experienced anything like it. That doesn’t mean they’re hesitant nor afraid of it. They’re all looking forward to the challenge.”

Among ACC teams, Clemson ranks first in scoring offense (45.3 points per game) and scoring defense (10.1). The Tigers closed the regular season Saturday with a 38-3 road win over South Carolina. The Gamecocks totaled only 174 yards against the Tigers, who have not allowed more than 294 yards in a game this season.

“The talent base at every position has been crafted at a really strong level that matches the style, system and schematics of the design,” Mendenhall said of Clemson’s defense. “You have a really nice blend of leadership with scheme and personnel and experience. That then forms culture and tradition. This group I think is the next version and probably the strongest version that I’ve seen.”

“Basically, everyone that touches the ball is very skilled, very capable,” Mendenhall said. 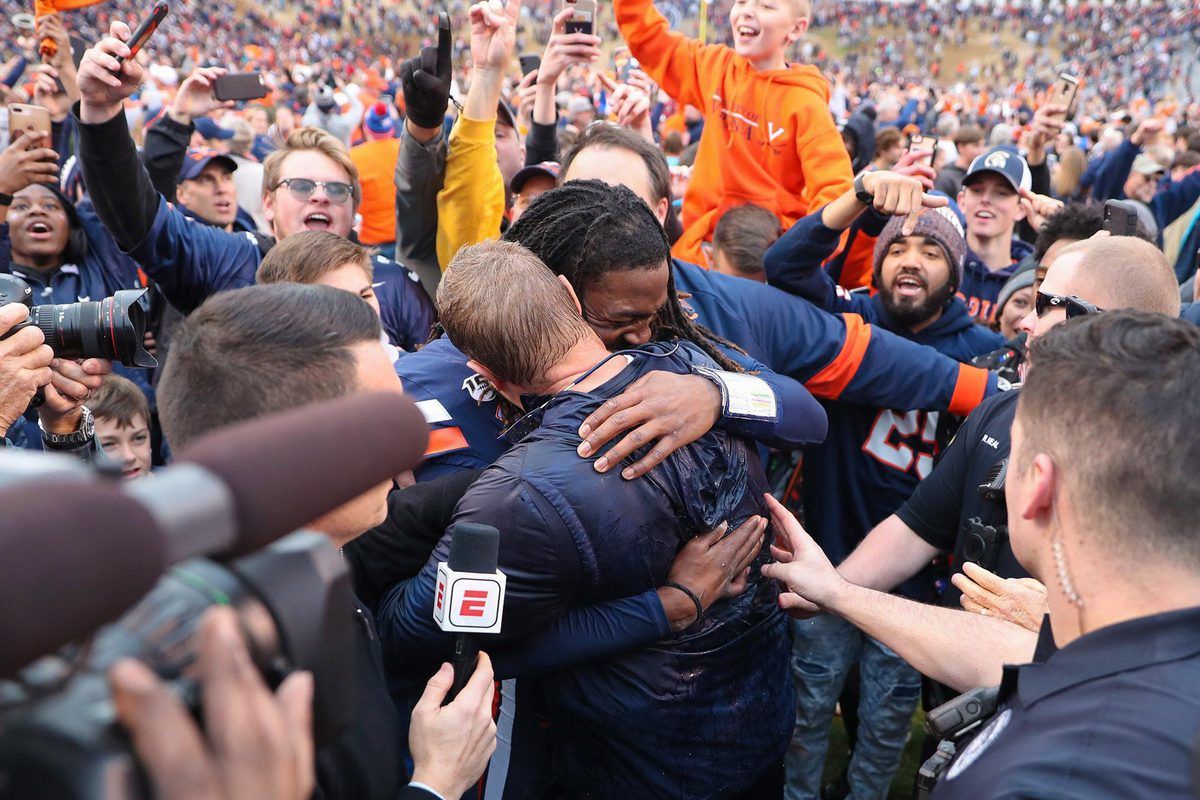 Swinney is in his 12th season at Clemson, where he’s elevated the program to unprecedented heights. The Tigers had not won 10 games in a season in more than 20 years before finishing 10-4 in 2011. Since then, they’ve won at least 11 games seven times.

His experience at Clemson gives him an appreciation for Mendenhall’s work at UVA, Swinney said. For the Cavaliers to reach the ACC championship game is “a huge moment,” he said.

“They just won the Coastal. They’re playing in a championship game. There’s a progression that you go through when you’re really building something special. I think that’s what they’ve been able to do to this point.”

In 2009, Swinney recalled, Clemson lost to Georgia Tech in the ACC championship game. Two years later, the Tigers defeated Virginia Tech, 38-10, in the ACC title game, but then lost 70-33 to West Virginia University in the Orange Bowl.

“It’s just all part of the journey,” Swinney said. “Regardless of who wins the game or what the score is or any of that stuff [Saturday night], this is a huge moment for both teams. You’re in a championship game. You’ve competed on the field for your division. It’s the culmination of an excellent conference season.”

For the Hoos, Mendenhall said, advancing to the ACC championship game is especially meaningful in their “quest for national relevance.”

UVA’s 39-30 win over Virginia Tech last week “did wonders for achievement and moving the needle for our program, hitting new benchmarks and metrics,” Mendenhall said. “Now all that does is qualify us, and that qualification isn’t a gift and it’s not random, it’s something we’ve earned. It’s qualified us, and our team has earned the chance now for the next and significantly bigger opportunity and challenge.

“Those two things are usually synonymous: opportunity and challenge. We’ve framed it as such. It’s a magical opportunity for our program.”

Swinney’s friends in the coaching profession include Tony Bennett, who in 2018-19 guided the UVA men’s basketball team to its first NCAA title. But Swinney said he hasn’t talked to Bennett this fall and doesn’t expect that to change this week.

“I doubt I’ll be getting a ‘good luck’ call from him,” Swinney said. “He’s going to be pulling for those Cavaliers. If we’re fortunate enough to win the game, I’m sure he’ll send his well wishes for the postseason. … He’s a great man, a great coach, a friend. As he should be, he’ll be pulling for those Virginia Cavaliers this week.”

Tickets for Saturday’s ACC championship game in Charlotte are currently on sale. Click here to purchase.

For All of Us END_OF_DOCUMENT_TOKEN_TO_BE_REPLACED