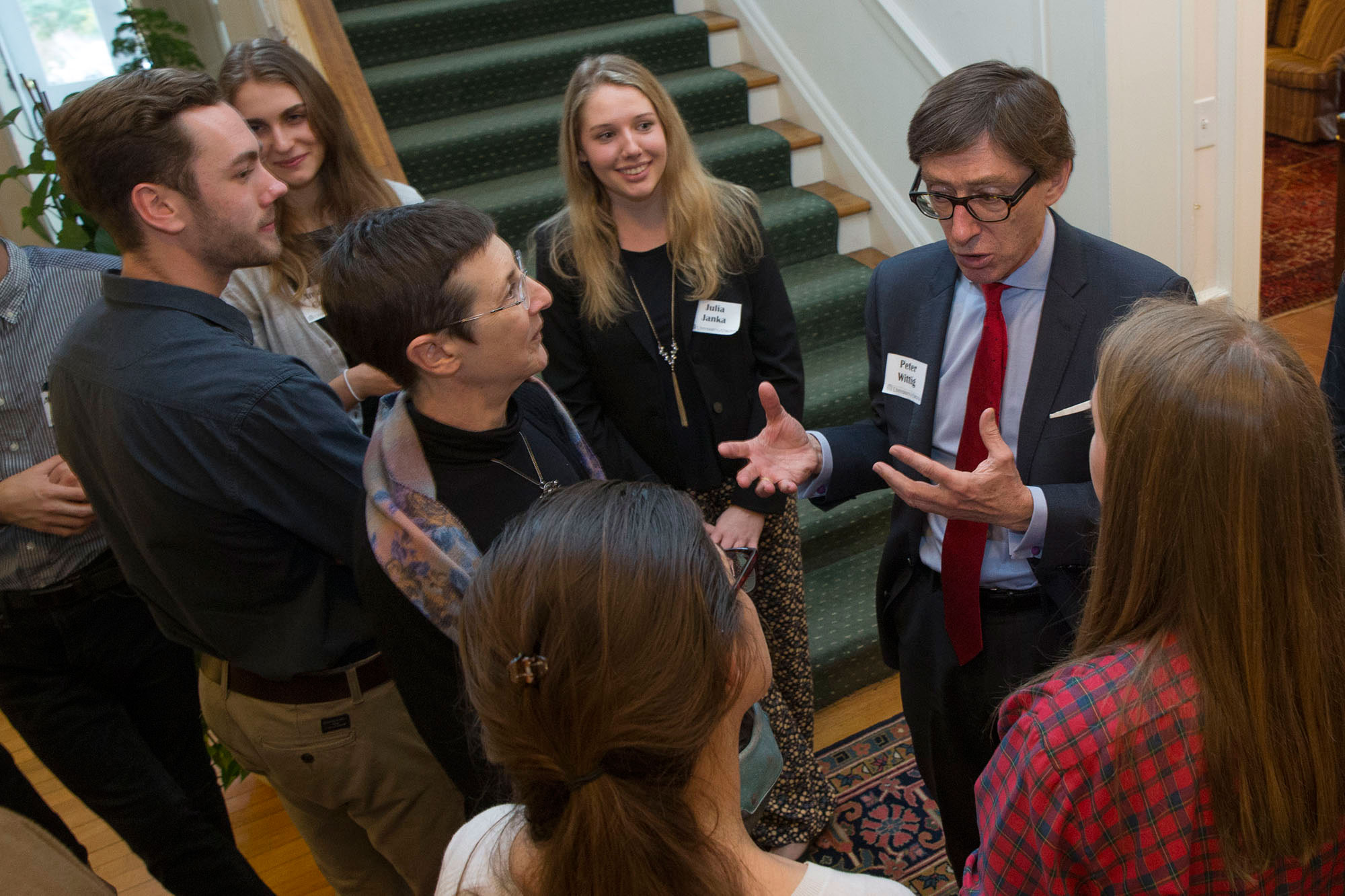 Speaking at the University of Virginia’s Newcomb Hall on Monday night, German Ambassador to the United States Peter Wittig called the ongoing refugee crisis in Europe “probably the most daunting challenge for Europe since the Second World War.”

UVA’s Center for Politics marked its 10th year of international programming and global outreach by hosting Wittig, who has been Germany’s ambassador to the U.S. since 2014.

The refugee crisis was a major focus of the ambassador’s remarks as well as a question-and-answer session that followed. Turmoil in the Middle East, particularly the Syrian civil war, has led to massive emigration from the region. Those fleeing the chaos see Europe as a safe haven, impelling many refugees to make dangerous, sometimes fatal, efforts to get there.

By far the most popular European destination, Germany took in more than 1 million asylum seekers in 2015, an influx that has shaken the nation’s politics. To put that in perspective, given their respective population sizes, Wittig said, Germany’s acceptance of 1.1 million refugees would be like the United States accepting 4.4 million refugees in a single year – roughly equivalent to the population of Kentucky.

During the early days of the crisis, German Chancellor Angela Merkel worked to make Germany a welcoming place for asylum seekers. Germany’s Willkommenskultur (“welcome culture”) became the by-word for her relatively liberal refugee policies, with many Germans taking pride in aiding displaced persons.

While some asylum-seekers might return to the Middle East after the region calms down, the German government is “clear-eyed about the possibility that many will not,” Wittig said. So integrating refugees into the labor market and helping them learn German is a priority.

But as is the case in other European Union nations, the refugee crisis has engendered strong anti-immigrant feelings among many Germans, precipitating the growth of right-wing populist groups such as the political party Alternative for Germany, or AfD, and Patriotic Europeans Against the Islamisation of the West, commonly known as PEGIDA. The latest sign that these movements are making political headway came in the results of Sunday’s parliamentary elections in three German states, in which AfD won enough support to enter the legislatures in each state for the first time. Merkel called it a “difficult day” for her party, the center-right Christian Democratic Union, which lost seats in all three states.

Still, Wittig said he expected Merkel and Germany to remain open to asylum-seekers. “Will [the election results] change the policy of the chancellor? My expectation is no.”

Germany’s history with far-right politics, most obviously exemplified by the Nazis, had largely buttressed it against such political movements, with some parties even earning bans for being anti-democratic.

The country’s political rules also work to limit the rise of parties that are far outside the mainstream; for instance, many German elections, including those for the Bundestag (the national parliament), require a party to win at least 5 percent of the vote to garner any parliamentary seats via proportional representation. While competitive right-wing populist parties have become prominent in many other EU nations over the last decade, such as the National Front in France and the True Finns in Finland, populist parties had previously made little progress in Germany outside of a few state parliamentary seats. Now it’s evident that the political forces driving the growth of populist parties across Europe – particularly the refugee crisis, immigration more generally, and skepticism toward the EU – are also affecting Germany.

Supporters of AfD tend to be in areas where there are few refugees and immigrants and where the benefits of globalization have not been widely felt, particularly in the former East Germany, the one-time Communist part of Germany during the Cold War whose economic development has lagged behind the western part of the state. Listening to Wittig, it was impossible to not draw parallels between the rise of right-wing anti-immigration parties in Europe and the anti-free trade, anti-immigration presidential campaign run by Donald Trump in the United States.

Beyond the refugee crisis, Wittig said that a big part of his job is dispelling myths about Germans and promoting an understanding of the country that goes beyond “Oktoberfest, beer and cars.” One such myth about Germany, Wittig said, was that the country is not diverse. Actually, even prior to the recent influx of migrants, a fifth of all German residents were either immigrants or have at least one immigrant parent.

Overall, Wittig said the relationship between the United States and Germany is “as good as it has ever been,” and that both nations are cooperating on a wide variety of issues, including the recent Iranian nuclear deal.

Wittig’s talk was the latest in the Center for Politics’ Ambassador Series, which also has featured visits from the ambassadors of Argentina, Austria, Russia and the United Kingdom. The ongoing series is organized by the Center’s Global Perspectives on Democracy program, which fosters dialogue between the United States and other countries through public events and international exchanges.

The next Ambassador Series event will feature Björn Lyrvall, Sweden’s ambassador to the United States, on April 26 at 6:30 p.m. The event is free and open to the public with advanced registration.

Wittig’s visit was coordinated in partnership with the International Residential College, the Office of the President, the Center for German Studies, and the German-American Association of Central Virginia.

Monkeypox Is Spreading, But University’s Risk Believed To Be Low END_OF_DOCUMENT_TOKEN_TO_BE_REPLACED

Q&A: Assessing the Risks and Rewards of Pelosi’s Plan to Visit Taiwan END_OF_DOCUMENT_TOKEN_TO_BE_REPLACED

These Giant Wind Turbines, Inspired by Palm Trees, May Be the Future of Renewable Energy END_OF_DOCUMENT_TOKEN_TO_BE_REPLACED