Amid the Devastation of Hurricane Harvey, a Miracle Delivery for UVA Parents 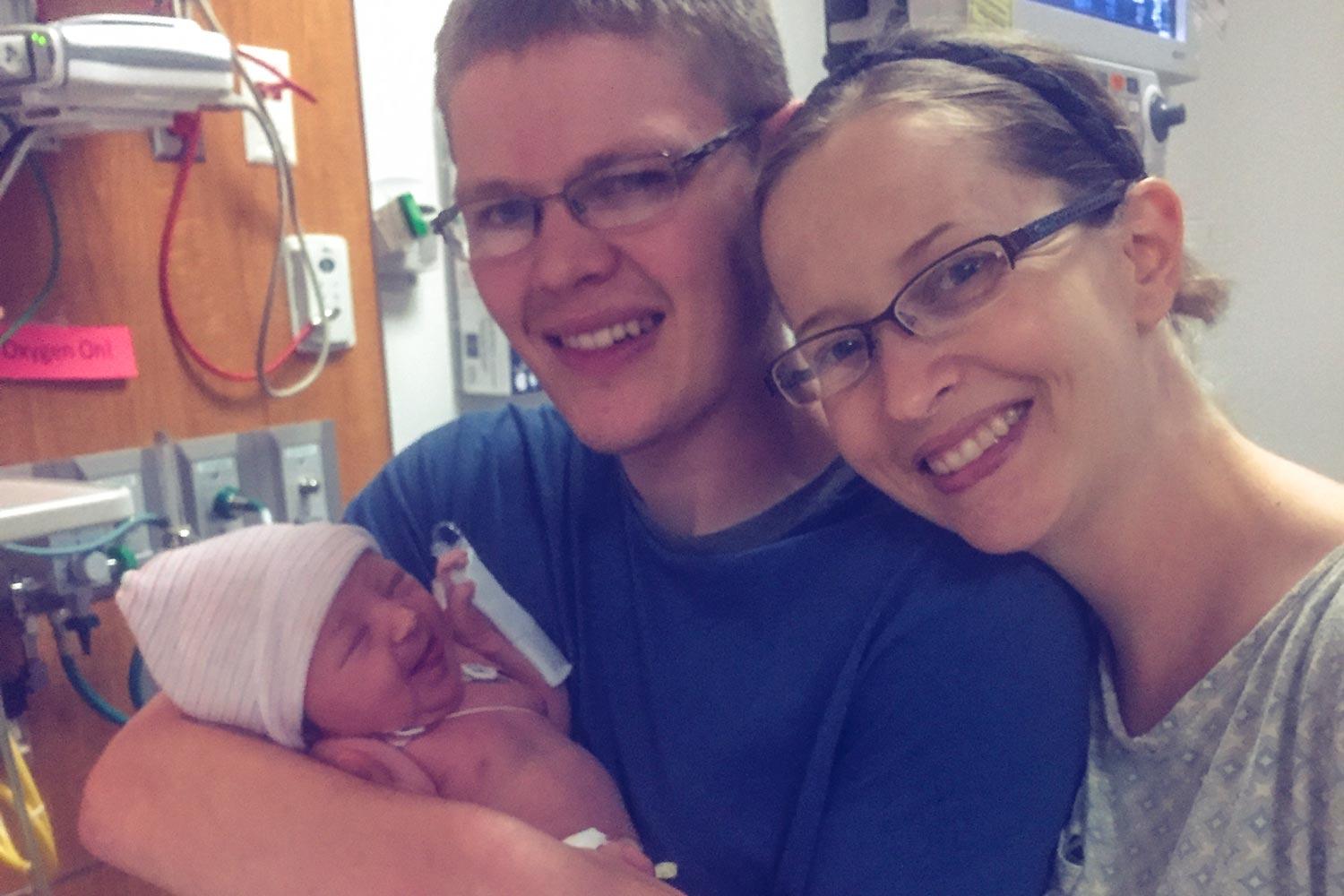 Many parents have crazy stories from the day their first child was born, but few have a story like Greg and Annie Smith, who welcomed their baby girl amid the rising floodwaters of Hurricane Harvey.

The Smiths moved to Houston in June after spending four years at the University of Virginia for their medical residencies – Annie in internal medicine, specializing in geriatrics, and Greg in anesthesiology. Both are now completing fellowships in their respective specialties.

When they moved to Houston, Annie was pregnant with their first child and due to give birth in late August – right around the same time that Hurricane Harvey arrived.

The couple had little experience with hurricanes, but as it became apparent that Harvey’s arrival could coincide with their baby’s birth, they made plans to leave for the hospital early Sunday morning if the storm got worse.

“Everything had gone smoothly at that point, though I had been having contractions off and on for four weeks,” Annie said. “Greg’s mother had been staying in Houston for two weeks prior to the hurricane in anticipation of an early delivery.”

However, when the couple woke up on Sunday, their apartment was surrounded by two or three feet of water, with more on the way. Hurricane Harvey had exceeded even seasoned meteorologists’ expectations and unleashed devastating floods across the Houston area. As the floodwaters rose, Annie’s contractions were growing worse.

“Around the time we saw the flooding on our street and parking lot, I went into active labor and started having frequent, painful contractions,” Annie said.

Greg tried calling emergency services, but the lines were so busy with rescue calls that he could not get through. Annie called her fellowship program director, who was working at a nearby veterans’ hospital, to see if they could do anything to help. While waiting on help, however, the couple realized that they might have to deliver their child at home.

“I was terrified,” Annie said. “I just keep thinking, what if something happened to me or happened to the baby? There would be very little we could do about it at home.”

In another example of the solidarity that has characterized Texans’ response to the storm, the couple’s new neighbors were eager to help. Some also worked in health care and brought medical supplies.

“It was remarkable. There were at least 15 people who showed up at our doorstep in the rain offering to help,” Annie said. “We both felt so full of gratitude for the amazing community.”

The group decided to move Annie to a second-floor apartment – floodwaters were still rising at this point – and Greg began preparing to deliver his child.

“My anesthesia training taught me to stay calm and focused in very intense emergency situations,” Greg said. “I received excellent training at UVA, but obviously this wasn’t in obstetrics. I delivered five to 10 babies during medical school, but that was under very different, controlled circumstances.”

He called an obstetrician friend from medical school, fellow Houstonian Dr. Cynthia Fountain, who talked him through the logistics of a home birth and offered to FaceTime the couple during the delivery if necessary.

“I tried to maintain my composure and do what I had to do to take care of my wife and baby,” Greg said.

Fortunately, the Smiths did not have to go through with their improvised plans. The director Annie had contacted had called a member of her family who lived near a fire station. That person walked to the fire station and told firefighters of the family’s predicament. Eager to help, the firemen drove a large dump truck through the flooded streets to the Smiths’ apartment. Neighbors formed a human chain to help Greg and Annie – who was still in active labor – wade to the truck and climb aboard. The couple rode in the back of the truck to the hospital.

“I was sitting on a fire hose with a shower curtain over my head to protect me from the rain, having powerful contractions every four minutes,” Annie said. “Thankfully, it was a short ride – about 15 minutes to the hospital.”

The firemen had notified the hospital of their arrival, and Greg and Annie were immediately whisked to a delivery suite.

“There were a lot of patients and families who were stranded at the hospital because of flooding, causing some resources like pillows and blankets to be limited,” Annie said. “Otherwise, the hospital was well-prepared for the storm and provided exceptional care.”

The Smith’s daughter was born at 1:59 a.m. Monday morning – warm, dry and safe after her parents’ ordeal.

“I thought she was the most beautiful baby I had ever seen and cannot even begin to express how thankful I am for such an amazing gift and blessing,” Annie said. Greg, too, was overwhelmed by the moment.

“Holding my beautiful little girl for the first time was such a memorable moment,” he said. “I remember feeling so thankful that she was there, safe in my arms, after all we had been through.”

They named her Adrielle Charlotte – Adrielle because it means “belongs to God” and Charlotte after the city they grew to love during their time at UVA.

“We absolutely loved our time in Charlottesville, primarily because of the many friends and excellent training we received at UVA,” Annie said.

As for her first name, the couple said it was something of a talisman to them throughout the whole ordeal.

“We had a lot of difficulties getting pregnant with Adrielle,” Annie said. “The meaning of her name provided a lot of comfort to both of us through this crazy experience. No matter what happened, we felt God would take care of her.”

Now, both mother and baby have been discharged from the hospital and are back at home. Thankfully, their apartment was not damaged too badly. Like many in Houston, the new family of three is ready to return to normalcy and help their new city do the same.

“Houston has come together as a community in an amazing way, with an enormous amount of support from across America,” Annie said. “It is encouraging to everyone to see the outpouring of love during such a difficult time. There is a lot of devastation all across the city and people are still working together to assess the damages and start to clean up and rebuild. It is going to be a long process.”