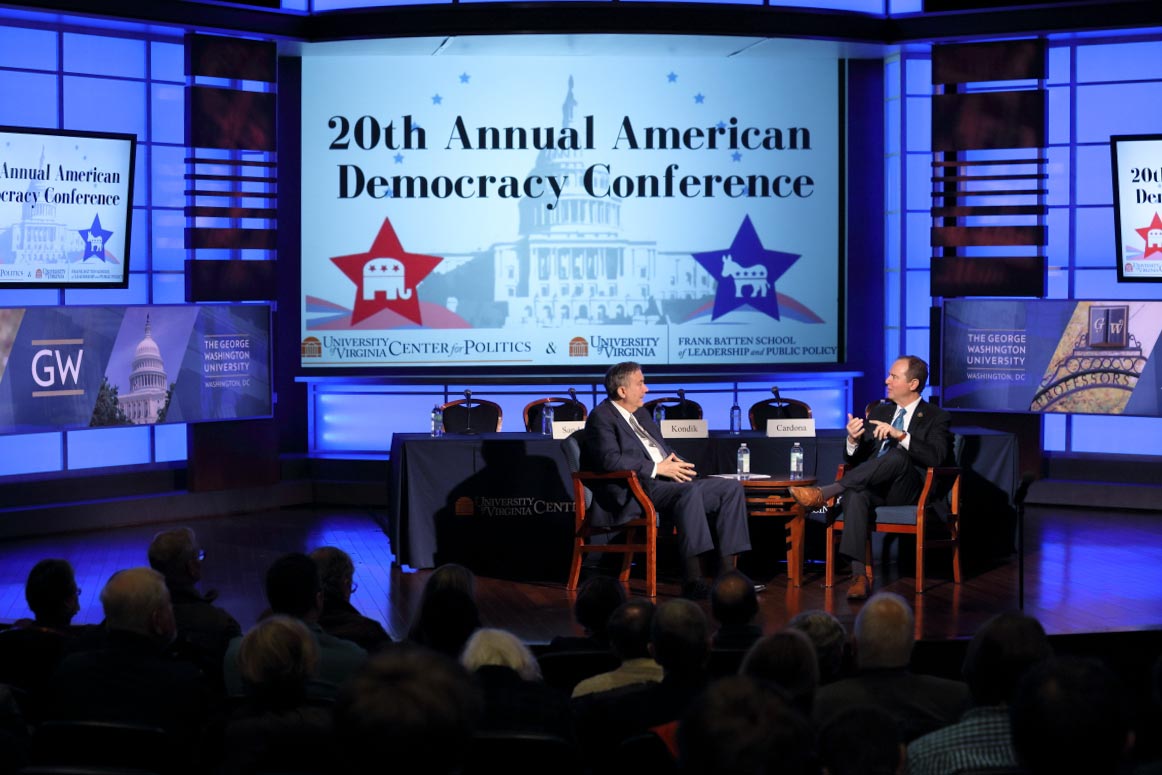 Some of the most influential players in American politics – including Democratic U.S. Rep. Adam Schiff of California and Republican U.S. Sen. Ted Cruz of Texas – on Thursday joined University of Virginia experts in Washington, D.C. for a robust, if occasionally heated, discussion of American politics at the 20th annual American Democracy Conference, hosted by UVA’s Center for Politics and the Frank Batten School of Leadership and Public Policy.

The conference started with some breaking news, as Schiff – who in January will become chair of the House Intelligence Committee and lead its investigation into election meddling and other intelligence matters – learned backstage that Michael Cohen, President Trump’s former lawyer, pleaded guilty to lying to Schiff’s committee and its Senate counterpart.

Cohen made the surprise plea Thursday morning in a New York City courtroom, admitting to making false statements to Congress about a Trump real estate project in Russia. Sharing the news with the audience, including many students, Schiff wondered if there was more to come. “Have others been lying?” he asked. He vowed to look into other possible perjury offenses and strengthen congressional oversight of the executive branch.

“We will do our appropriate oversight, as our founders intended, whether the president likes it or not,” Schiff said, speaking just a few blocks from the White House at George Washington University.

While the tone at times was sharp, Center for Politics Director Larry Sabato said the point of holding the conference was to give students and the public direct access to political figures with a wide variety of viewpoints, offer opportunities to ask questions and ultimately encourage political participation.

“We are a nonpartisan institution, UVA is a public institution and we have the obligation to present not just both sides, but many sides,” Sabato said. “Our core mission is civic education and civic participation, and events like this are part of that mission.”

Sabato interviewed Schiff about a range of topics, including how the House Intelligence Committee would handle its investigation into Russian interference now that Schiff and the Democrats have control of the committee. The congressman said the committee will examine financial connections between the president, his businesses and Russia and look into some of the president’s associates, including former campaign adviser Roger Stone and his possible connections to Wikileaks founder Julian Assange.

“We are going to do investigative work that has not been done … and prioritize the most important investigative questions that we were not allowed to pursue” when Republicans led the committee, Schiff said. He said that work would be guided by any reports from special counsel Robert Mueller, which he hopes will be made public.

“We are determined to make sure that report [from Mueller] is not buried,” he said. “It is too important for the public to know.”

Despite the tough talking on congressional oversight, Schiff did cite some opportunities for bipartisan cooperation with the White House and Congressional Republicans, including priorities like improving infrastructure or reducing high prescription drug prices.

“There is an opportunity, if the president is willing to take it, to get things done,” he said. “We will work with him where there is common ground.”

About an hour later, Cruz – opposite Schiff both in his party and his house of Congress – took the stage, comparing the current American political situation to the famous Charles Dickens quote, “It was the best of times, it was the worst of times.”

“Today is a deeply divided time in our country. There is an anger and a rage that I think is not healthy,” said Cruz, who defeated Democrat Beto O’Rourke in November to earn another term in the Senate. “That anger and rage is tearing us apart and corrodes our democracy,” he said. “Democrats have unleashed some of the angriest voices on the left, and I believe we will see many investigations, subpoenas and even talk of impeachment. That anger and rage will have to burn out before we can come together and enact major legislative reforms.”

However, Cruz said he was heartened by the range of political views in the room, evidenced by both the panelists and the questions from the audience.

“There are people in this room who have a whole variety of political views, and that is a wonderful thing,” he said. “Let me encourage each of you to embrace civil discourse to embrace the discussion of ideas.”

Cruz noted that he debated Vermont U.S. Sen. Bernie Sanders, a 2016 Democratic presidential candidate, in a series of town halls on health care, taxes and other issues. He also harkened back to a commencement address he gave 10 years ago at the University of California at Berkeley, a university, he quipped “where you would not expect to find me.”

“Democracies are designed to have conflicting points of view,” he said. “But you have to have discussions on substance, on issues and on what works. I think we are seeing relatively little of that.”

Both Cruz and the panelists took questions from the audience, on topics ranging from health care and immigration to media bias, racism and voter suppression. Questioners included several students from both UVA and George Washington University, who lined up to take the microphone one by one.

Thursday’s conference represents one of several ongoing efforts at UVA to facilitate debate and discussion of the future of American democracy, as well as research and scholarship around some of the most important questions facing democracies worldwide.

UVA’s Democracy Initiative, launched earlier this year, is studying key issues, such as media, religion and race, that are shaping democracy. Another national symposium series hosted by the Center for Politics and the Batten School, “Democracy in Perilous Times,” will continue to bring political leaders and analysts together through a series of events on Grounds and in Washington.

A Year We Will Never Forget: 2019-20 in Review END_OF_DOCUMENT_TOKEN_TO_BE_REPLACED

‘What Will You Carry With You?’ Remarks From UVA President Jim Ryan END_OF_DOCUMENT_TOKEN_TO_BE_REPLACED