On and Around Grounds, Diversity Leader Emphasizes Inclusiveness and Community 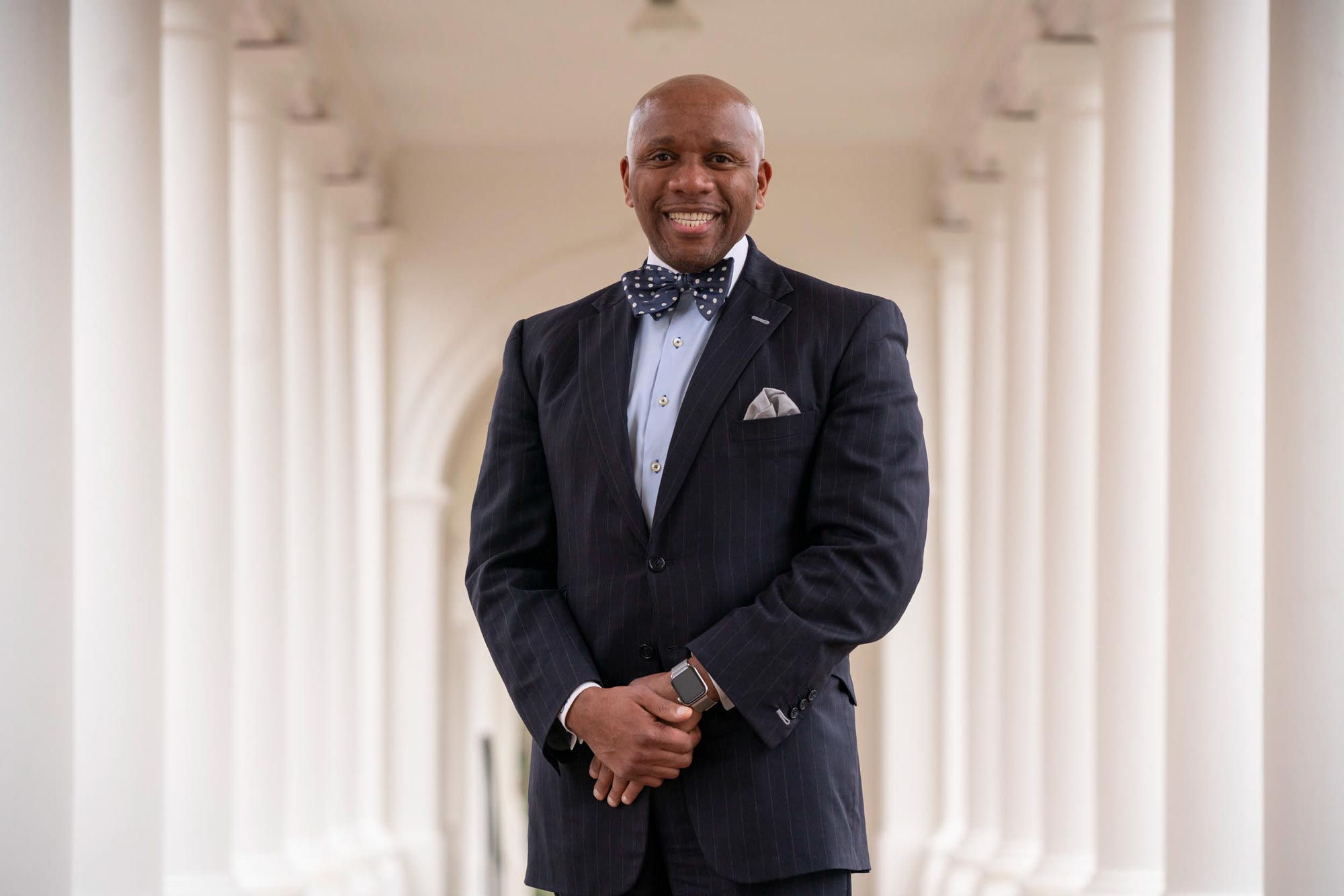 From advocating for prisoners in his early law career to leading major universities’ diversity and equity efforts, Kevin G. McDonald has been working on social justice concerns and helping create inclusive communities for nearly 25 years.

After hearing impaired students at RIT got to know McDonald, they gave him a special name that signaled his acceptance. RIT houses the National Technical Institute for the Deaf, which accounts for 10% of the deaf or hard of hearing student population. They gave McDonald a unique sign-language name – and it represents his penchant for wearing bow ties.

Just as McDonald appreciated becoming part of a community that he hadn’t been exposed to much before, he has started his job as vice president for diversity, equity and inclusion at UVA with similar excitement.

The only child of parents from Jamaica and Bermuda, McDonald grew up in Cleveland. He earned his undergraduate degree from Andrews University, a small liberal arts school in Michigan, went to law school at The Ohio State University, and later pursued a doctoral degree in higher education leadership from the University of Rochester.

He took some time from his busy schedule to talk with UVA Today about how he finds invigorating the challenges and opportunities in his line of work, and how he senses a collaborative spirit and desire for engagement with diversity issues “at a high level” at UVA. He is ready to build more sturdy bridges with the University’s surrounding communities.

Q. Since you began your job in August, how have you been spending your time?

A. My time has been spent with a lot of introductory meetings, both across Grounds and in the community, that have been extremely fruitful – just to hear different community members’ perspectives and get insights and historical context, and any future desires. I’ve appreciated that.

My transition has been smooth, I think, because people have been so welcoming.

I am excited about rolling up my sleeves and engaging across Grounds and in our local community and county to play whatever part I can to help enhance diversity, equity and inclusion efforts here.

A. One of the major ones has kicked off, and that’s the “Inclusive Excellence” framework. When I interviewed, and through some of my introductory meetings, there was this expressed hungry appetite for a metric-driven strategic approach to diversity, equity and inclusion that would extend across Grounds, across all of UVA. I wanted to make sure that was one of the first tasks that we would undertake.

I appreciate the collaborative spirit across Grounds, the incredibly supportive leadership that I have received from President Ryan and the great team members within our Division for Diversity, Equity and Inclusion, specifically Rachel Spraker [senior director for equity and inclusive excellence in UVA’s Office for Equal Opportunity and Civil Rights], who’s providing some leadership to the development and implementation of the framework.

Right now, we’re trying to develop the overarching framework that will give us a baseline within five areas of organizational functioning. [The five areas: access and success, climate and intergroup relations, education and scholarship, infrastructure and investment, community and partnership.]

If we’re looking at access and success for students or faculty or staff, for example, what might that look like? That’s a great guide as our academic and administrative units develop their own plans.

On Tuesday, Rachel led a convening for those who are going to be engaged in this work across Grounds to come together and to start to think about this in their respective areas, but also in the overarching framework. The response level already has been high to attend that. I appreciate the willingness of our community to explore this path, because it’s a path that hasn’t historically been explored across all of UVA.

Q. What are the benefits of having this “Inclusive Excellence” process?

A. I think historically organizations have talked about diversity, equity and inclusion in a way that was based on, “We need to do this. It’s the right thing to do. It’s a moral imperative.” But outside of those value-based principles, I think there’s this recognition now that what gets measured gets done, right? Just being able to look at data disaggregated to see what story it’s telling us is important to be able to identify what I call areas of affirmation and areas of opportunity, and then being intentional about filling any gaps that exist or identifying additional resources to support efforts that may be working.

I think you have to be both individually and organizationally reflective, and open and honest and transparent in that process. If you really want it to work, you have to be willing and able to share your data and share your points of pride, but also the areas that you know might benefit from doing better. I think it’s an important exercise, but I also think the kind of revelation that it provides will make us a better institution, make us a better community.

Q. Let’s talk about the importance of community and being good neighbors, since that ties into a big priority for the University overall.

I also think that we have the leadership in place. It has been a consistent narrative emanating from President Ryan, from our provost, from our chief operating officer, from many of the colleagues that I have engaged with on a daily basis, and I think that bodes well for the future and the present.

The President’s Council on UVA-Community Partnerships is probably one of the main examples. The president is there and he’s present. He’s thoughtful. And he’s transparent. I think those are all important elements to engaging in meaningful ways with your community partners.

As someone who’s new – because I’m ever the optimist and a glass-half-full kind of person – I am excited about those conversations, and again, just excited that we have leaders who know that it’s not easy, know that sometimes the discussions are difficult, but are committed to making headway.

Q. How did you get into this work?

A. My first role after law school was investigating complaints of discrimination. I was a contract employee for the Department of Justice civil rights division, disability rights section. I investigated complaints under the [Americans with Disabilities Act], and specifically it took me to prison systems.

It was an eye-opening experience, because I heard from inmates about some of the deplorable conditions they were living in, and the fact that there were many wardens of those prison systems that didn’t believe inmates had rights, so they didn’t deserve or warrant accommodations.

It was at that point, through attempting to negotiate or mediate some type of resolution, that it helped solidify for me that I was in a space I needed to be in, because I was so passionate about the rights that were not being afforded to the incarcerated.

I think that charted me on a path of trying to find the intersection of my passion and my purpose. Breaking into higher education, I started out investigating complaints of discrimination for the University of Maryland, across the entire university of faculty, staff, students, alumni, contractors. It was both daunting and invigorating. I loved it.

I’ve relished opportunities to go into spaces that had either endured or encountered some challenges, or where it was just such a clean slate that there was opportunity to build something.

Q. Where do you see UVA?

I feel like I’ve come at a time when the collaborative spirit and engagement are at a high level. I think if you have that, and with some level of creativity and innovation, you can accomplish a lot. It’s difficult to do this work in a silo. But boy, if you can come together as a community and engage your constituency at all levels – I tell people you can turn ripples into waves.

The key is remembering that you can’t take your foot off the gas pedal. You just can’t.

Q. What other things do you like to do?

A. I’m a foodie person. I like cooking and eating. I’m also vegan, and I like exploring and expanding my palette with regard to vegan options in the community.

I do think in this work, self-care is incredibly important.

And just spending time with family. We have a son and two daughters. Our youngest daughter is here. She’s a senior at Albemarle High School, and is also taking some courses at Piedmont Virginia Community College, and finishing up her college application process, so we’ll see where she goes.

For me, finding community and developing a sense of belonging is an important part of being here. Part of that is being proactive and part of it is a community that also provides that experience.

What it Means to Be a Cavalier Baseball Player END_OF_DOCUMENT_TOKEN_TO_BE_REPLACED