Up, Up and Away – and Back to Earth 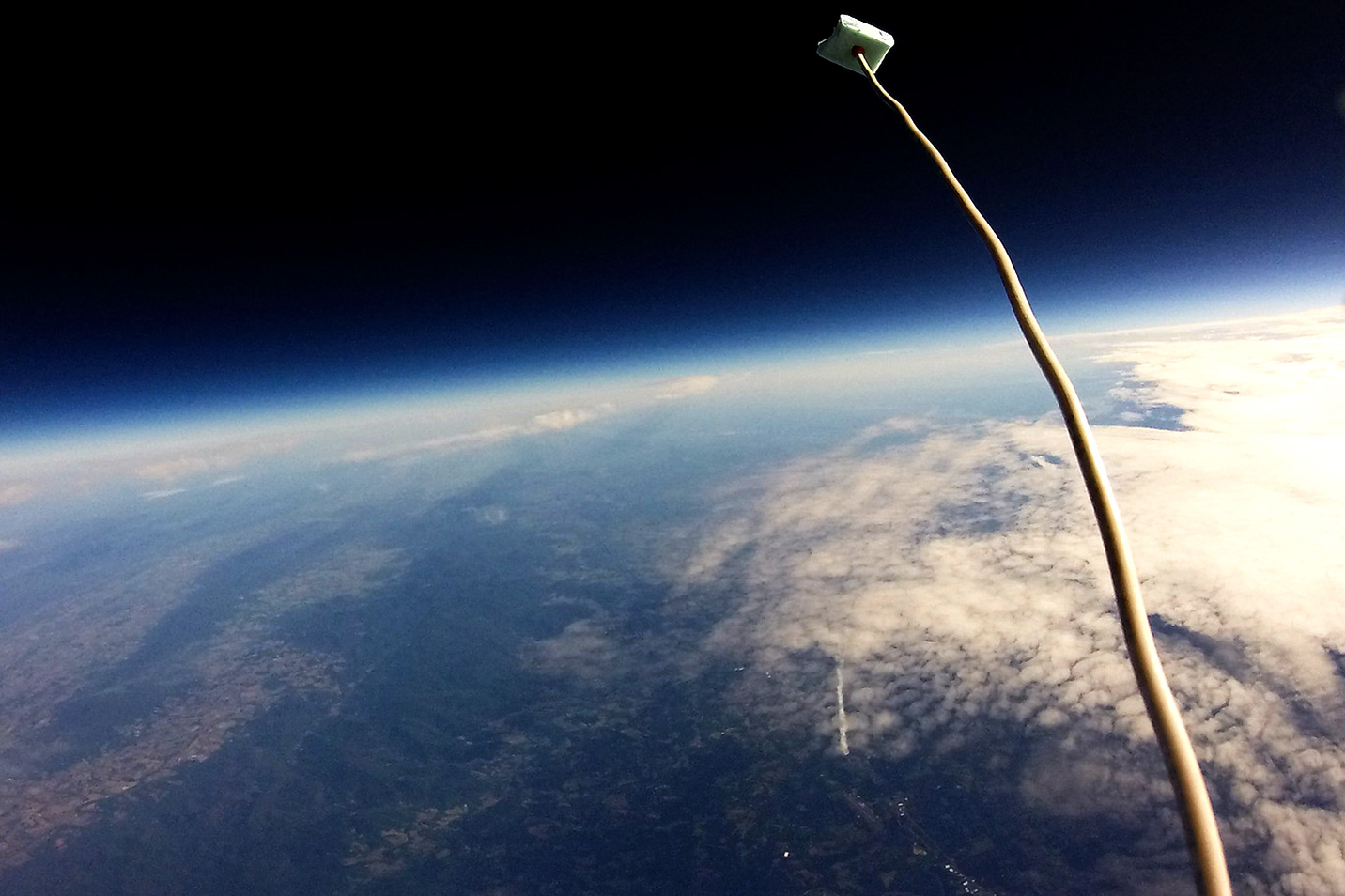 Last school year University of Virginia astronomy-physics majors Chloe Downs and HeeSeok Joo were looking for a project for a required independent study course, where they get to work on a real-world project under the mentorship of a faculty expert. Both are interested in astronomy instrumentation – the part of astronomy focused on building equipment and sensors for observatories. They went to UVA astronomer Mike Skrutskie, an expert at instrumentation who has built and directed the construction of several infrared sensors and other devices for telescopes.

As it happened, Skrutskie was beginning planning for a telescope that someday will be carried aloft on a high-altitude weather balloon, allowing observations of space without interference from the Earth’s atmosphere. He gave Downs and Joo the assignment to design and build a payload of sensors that could be launched for some preliminary testing.

The two students enlisted design help from physics student Nina Mazzarelli. The three students then worked through the spring semester and into the summer building their payload. On a clear day, Sept. 22, they finally launched their balloon and its cargo to 111,000 feet from a church parking lot near Keswick. 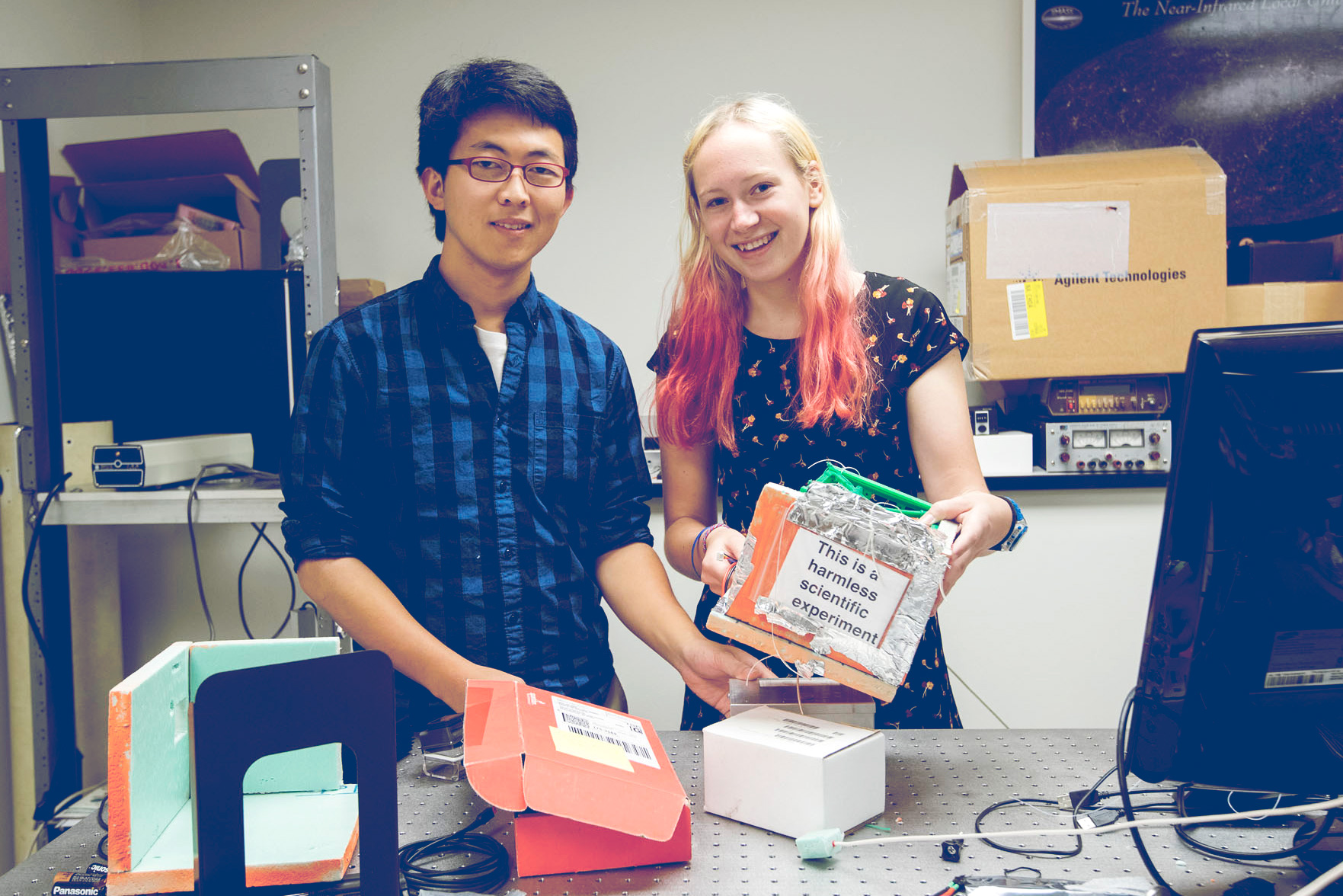 Downs, a fourth-year student, discussed the project with UVA Today.

Q. How did your project relate to Professor Skrutskie’s overarching goals?

A. The main purpose of our payload was to prove that we would be able to track the balloon while it was in flight, as well as get some information regarding altitude and temperature. It also took measurements that we could use to predict how future payloads would behave at altitude, mainly in regard to temperature. And we took pictures just because we wanted pictures!

HeeSeok and I were so excited about getting to work with actual equipment, more of the engineering side of astronomy versus theory work. And Nina was thrilled to jump in.

Q. What was your goal as students for the project?

A. Our goal was to prove that we could design, build and fly a payload on a weather balloon. We designed and 3-D-printed a cage that would support all of the components that we wanted to fly: an Arduino computer and antenna that would report the GPS position through something called the APRS (Automated Packet Reporting System) amateur radio network; a Raspberry Pi computer with a camera; as well as temperature and altitude sensors, a GoPro camera and a SPOT tracker that would also report GPS position as a backup to the APRS system. We then installed insulation around the cage so that the components wouldn’t get too cold during the flight.

Q. How did you choose a flight date?

A. We used online weather resources to predict the path of the balloon once launched. We had to estimate the ascent speed of the balloon, given its weight and the amount of helium we used, in order to accurately predict the path. Some paths can be hundreds of miles, so we were really looking for a time when the balloon would not be carried too far.

We determined that the weather would be good at the beginning of this fall semester, so we waited until we found a clear day with good winds and set off to a pre-planned launch site. The weather cooperated and we were able to launch the balloon around 8:20 a.m. The APRS system worked perfectly and the predicted track closely matched the actual track, so it was relatively easy to recover the payload near Afton, about 30 miles west-southwest of the launch site – after a three-hour, 40-minute flight.

Q. What did you learn from this project?

A. Most of what we learned is what we would do better in another flight. For example, it took us longer than expected to prepare the payload at the launch site. In a re-do, we would choose a different configuration of the components in order to make it easier to launch the balloon.

Also, the GoPro ran out of memory sooner than expected, and the Raspberry Pi camera had problems with the exposure times, causing many of the pictures to be oversaturated. Both of these are problems we would fix.

But overall, we accomplished what we set out to do, and learned a lot from the experience.

Q. How much guidance did Professor Skrutskie provide? What’s next?

A. Mike is an excellent mentor, and he left plenty of room for us to figure everything out for ourselves. We had a lot of autonomy. It was rewarding to watch all of our hard work pay off when the balloon was launched and recovered. I had a great experience because this was unlike any other project I had worked on at UVA.

In terms of further plans, we still have the recovered and usable payload, and have another balloon that was meant as a spare. We’re hoping to get the chance to launch that spare at some point, having fixed the camera issues. We just need the winds to cooperate! 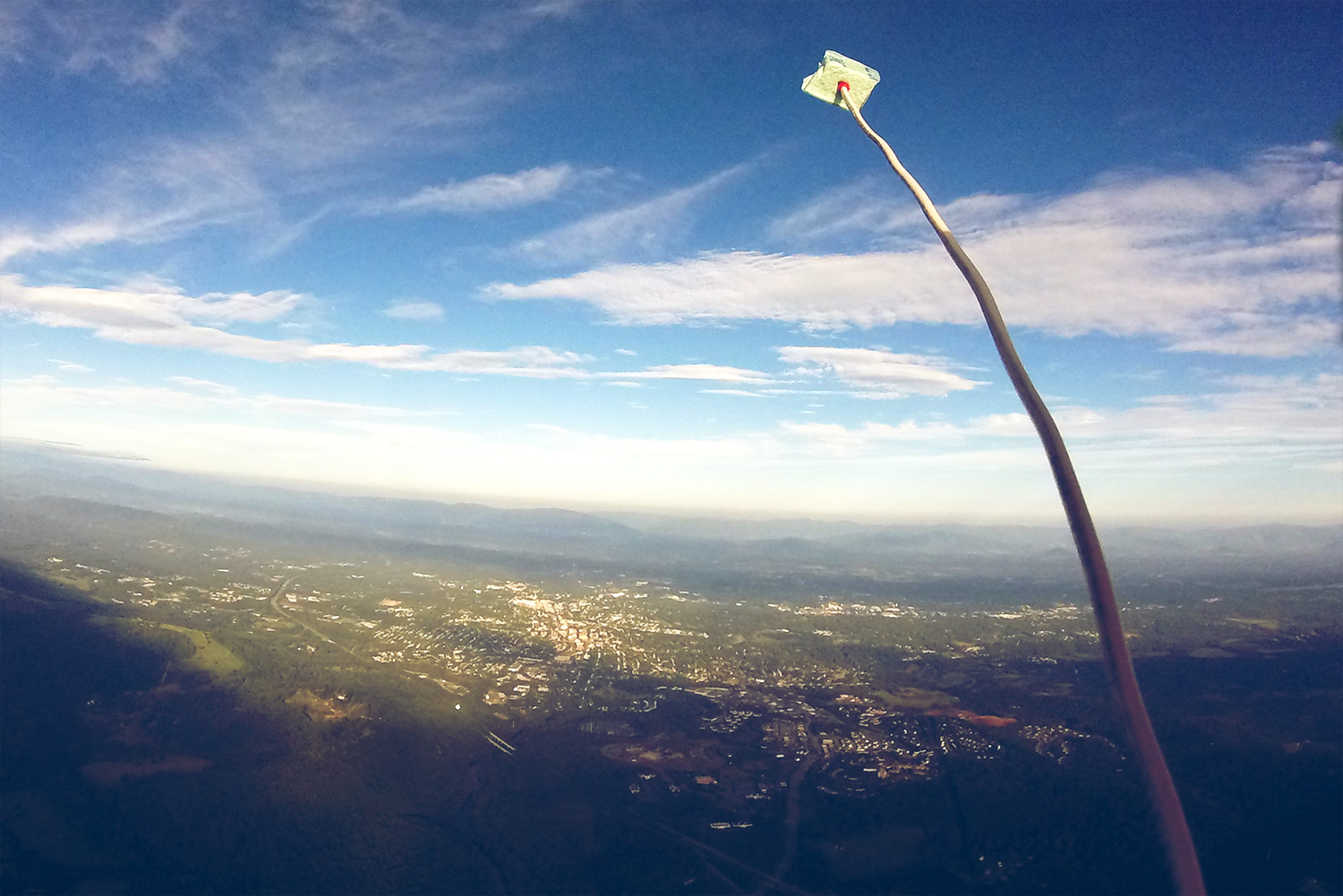 Monkeypox Is Spreading, But University’s Risk Believed To Be Low END_OF_DOCUMENT_TOKEN_TO_BE_REPLACED

Q&A: Assessing the Risks and Rewards of Pelosi’s Plan to Visit Taiwan END_OF_DOCUMENT_TOKEN_TO_BE_REPLACED

These Giant Wind Turbines, Inspired by Palm Trees, May Be the Future of Renewable Energy END_OF_DOCUMENT_TOKEN_TO_BE_REPLACED