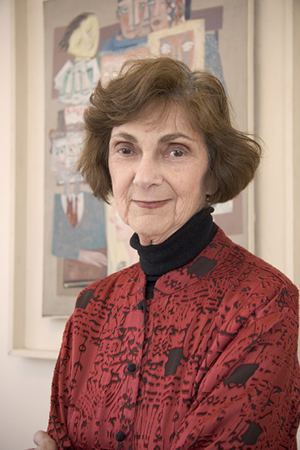 Ann J. Lane, a professor of history and women’s studies who helped women make their mark at the University of Virginia, died May 27 at the age of 81. She came to U.Va. in 1990 to lead its new women’s studies (now women, gender and sexuality) program and joined the history department in the College of Arts & Sciences.

Lane’s interest in advancing women’s careers and scholarship about women earned her appointments as director of women’s studies at two formerly all-male institutions: in addition to U.Va., she worked at Colgate University from 1984 to 1990.

When she arrived on Grounds, the late Raymond J. Nelson, then dean of the faculty of Arts & Sciences, gave her two instructions: establish the women’s studies program at the University and “make trouble!” Lane followed those directives with passion and commitment, as she worked to advance feminist scholarship and to champion the concerns of women at U.Va. and beyond. An outspoken advocate when circumstances required, Lane was also known for her warmth and for her vital interest in the people around her, her daughters and colleagues wrote.

Lane’s presence and fearlessness in advocating equal treatment of female faculty and students opened the door for other women to be heard in the effort to transform U.Va. into a more diverse community, her colleagues said.

Psychology professor Charlotte Patterson, who now directs the women, gender and sexuality program, said coming to U.Va. “just 20 years after women were admitted as undergraduates on a regular basis, Lane understood that U.Va.’s transformation on issues related to women and gender had just begun. She became a trenchant voice for women.”

Lane came to the University at just the right time, Sharon Davie, director of the Women’s Center, wrote in an email. Davie had been overseeing courses and services, and she then focused on the center while Lane developed the women’s studies program – “with extraordinary intelligence, creativity and organizational savvy,” Davie wrote.

“And everyone who knew Ann knows this: she was fearless and direct in standing up for her beliefs. Ann helped women’s studies to grow and to flourish. At the same time, she was involved in shaping the University and was tireless in promoting gender equity.”

Farzaneh Milani, professor of Middle Eastern & South Asian Languages & Cultures, as well as Women, Gender & Sexuality, became director of women’s studies after Lane. She wrote that she “had the good fortune to be Ann Lane’s mentee and friend for well over two decades. I had the privilege to watch her, with awe and admiration, as she selflessly dedicated her life to women’s issues at the University of Virginia. This was all the more remarkable as she never hesitated to subordinate her own pioneering scholarly work to the pursuit of her lofty communal goals and noble ideals.”

Early in her career, Lane specialized in Southern and African-American history, the fruits of her work appearing in two works published in 1971, “The Brownsville Affair: National Outrage and Black Reaction,” a monograph on a 1906 racial incident involving black soldiers and white citizens, and “The Debate Over ‘Slavery’: Stanley Elkins and His Critics,” an edited work on an important historiographical controversy for which she also wrote the introduction.

Like many young women of her generation in academia, Lane responded to the women’s movement and its academic arm, women’s studies, and she quickly emerged as an activist and a pioneer in women’s history.

Lane’s most notable scholarly contributions were to the study of feminist theory and women’s biography. Her work on Charlotte Perkins Gilman constitutes her most significant scholarly legacy. Her rediscovery of Gilman’s 1915 feminist utopian novel, “Herland,” (reprinted in 1979) followed by “The Charlotte Perkins Gilman Reader” the next year, helped direct attention to a neglected feminist writer.

A recipient of fellowships from the National Endowment for the Humanities and the Ford Foundation, Lane also won a Scholar Award from the Virginia Social Science Association.

She stepped down as women’s studies director in 2003, but continued to teach until 2009, when she retired and returned to New York City to be near her children and grandchildren.

In the last years of her life, Lane was working on a book about the cultural history of consensual sexual relationships between professors and their students, titled “Sex and the Professors.” She worked on U.Va.’s policy, enacted in 1993, barring professors from having intimate relationships with students they supervised. Her 1998 article, published in the Chronicle of Higher Education, was drawn from years of interviews and emphasized the troubling power differentials between professors and students.

“Bold and spirited in support of women students and women faculty, Ann Lane enjoined the College to begin an important process of change that is still under way,” Patterson wrote. “She was an honored teacher, a supportive colleague and a treasured friend whose presence strengthened the University in many ways.”

When Lane came to U.Va. in 1990, there was one student with women’s studies as her area of concentration. Today the women, gender and sexuality program boasts more than 50 majors, and classes routinely fill up quickly.

For information about memorial arrangements in the fall, email annlanememorial@gmail.com.

Memorial contributions in Lane’s honor can be made to the Women, Gender & Sexuality Program by sending checks payable to the “University of Virginia” to U.Va. A&S Development, P. O. Box 400801, University of Virginia, Charlottesville VA 22904, with a notation “in memory of Ann J. Lane” and designated for the program.

Here Is What You Need to Know About the New Coronavirus Variant, Omicron END_OF_DOCUMENT_TOKEN_TO_BE_REPLACED

Fall Is in the Air on Grounds END_OF_DOCUMENT_TOKEN_TO_BE_REPLACED

Meet the Cats and Dogs Your CVC Donation Supports END_OF_DOCUMENT_TOKEN_TO_BE_REPLACED