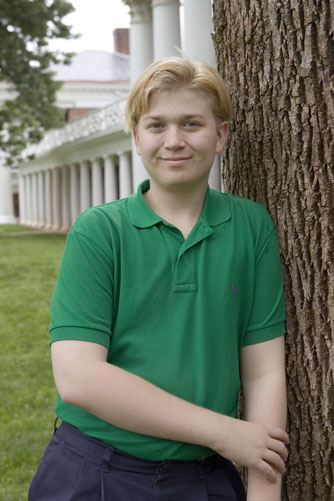 May 17, 2006 — When Gregory R. Smith of Keswick, Va., graduates at age 16, he will be the youngest person ever to receive a master’s degree from the University of Virginia.

A child prodigy whose IQ reportedly tests “off the bell curve,” Smith was memorizing and reciting books at 14 months, adding numbers at 18 months and taking in the information presented to him by his parents and earliest teachers like a super computer. It only took him one year, for example, to advance from second to eighth grade.

He arrived at U.Va. on June 9, 2003, his 14th birthday, to begin graduate work in mathematics. He said he especially likes “the thinking and logic that comes with the study of math,” and sees how the ability to think logically through complex problems can directly benefit future political, business and social activities in which he might become involved.

But “genius” is only one half of the Greg Smith story. When not voraciously learning, this young man travels the globe as a peace and children’s rights activist. He tries to fit his public speaking engagements around his academic calendar, preferring to travel on weekends, during spring and winter breaks, and over the summer than miss any classes.

The founder of International Youth Advocates, an organization that promotes principles of peace and understanding among young people throughout the world, Smith has visited nine countries, and has traveled extensively throughout the United States.

When overseas, he speaks through the use of local interpreters when necessary, although he tries to learn a few phrases in the native language of each place he visits, such as this quote from Kenya’s first president Mzee Jomo Kenyatta: Amani, upendo, na umoja idumu milele, which translates, Smith said, as “peace, love and unity — forever and ever.”

During his talks, Smith advocates education for all children, as well as “peaceful parenting,” a term he has coined to connote “loving and caring parenting that instills moral values in children and that does not permit children to be exposed to overly violent situations,” including movies, television programs or computer games, he said.

When talking to groups of children, he tries to refute a common stereotype that learning is “only for nerds and geeks,” he said. It bothers him that children who like to learn are sometimes ostracized for exhibiting their intelligence.

He admitted that he is also bothered when people judge other people because of their age. But he also sees such judgments, when made about him, as an opportunity “to prove them wrong,” he said.

That optimistic spirit has led Smith to organize humanitarian aid projects for East Timor orphans and youth in Sao Paulo, Brazil; to help Rwanda build its first public library; and, while youth ambassador for the Christian Children’s Fund, to launch a $350,000 campaign to build a “peace school” in Kenya for the children of three warring nomadic tribes — the idea being that, with joint formal education, these tribal children would have the knowledge necessary to come up with innovative ideas for how to live and coexist peacefully.

Over the years, Smith has met with former U.S. President Bill Clinton and former president of the Soviet Union Mikhail Gorbachev, plus Nobel Peace Laureates, including Betty Williams, Archbishop Desmond Tutu and Jose Ramos-Horta, to talk about his educational and peace plans and to learn from them about “how they’ve dealt with difficult situations” so that he can follow their example, he said.

For these and other humanitarian and advocacy efforts, Smith has been nominated four times for a Nobel Peace Prize.

“In my heart, I hope for so many things to happen,” Smith said of his efforts for peace. “I want to work on so many things, and discuss solutions with people, but realistically, I know I can only do so much. So I try to reach out to other people and encourage them to take part. One drop doesn’t make an ocean, but with enough drops, you can begin to make a change.”

Meanwhile, Smith remains committed to making his education his priority and will take time this summer to consider his next steps. He isn’t exactly sure whether he’ll continue working toward a Ph.D. in math, or shift into another discipline, like biology, which he described as being “a big love” of his. He said he has a strong interest in political science and international relations, and that he expects to complete several doctoral degrees. “I never am satisfied with how much I’ve learned,” he said. “I always want to learn more and to understand our world.”

Also on tap for this summer: more travel. Smith hopes that plans will firm up for a trip to Venezuela, where he will give motivational speeches and travel to different schools and visit various humanitarian projects.

Smith will find some time this summer just to be a teen: shooting hoops on the basketball court behind his house (he loves sports, especially the Philadelphia Eagles football team and NASCAR stock car racing) and listening to music — anything from the less-well-known Afro-Celt Sound System to the hugely popular Irish rock band U2, whose lead singer, a peace activist named Bono, Smith would love to meet one day.

A newly licensed driver, Smith will also spend some time behind the wheel of his new Chevy Cavalier — “blue, because they didn’t have orange,” he said with a grin.