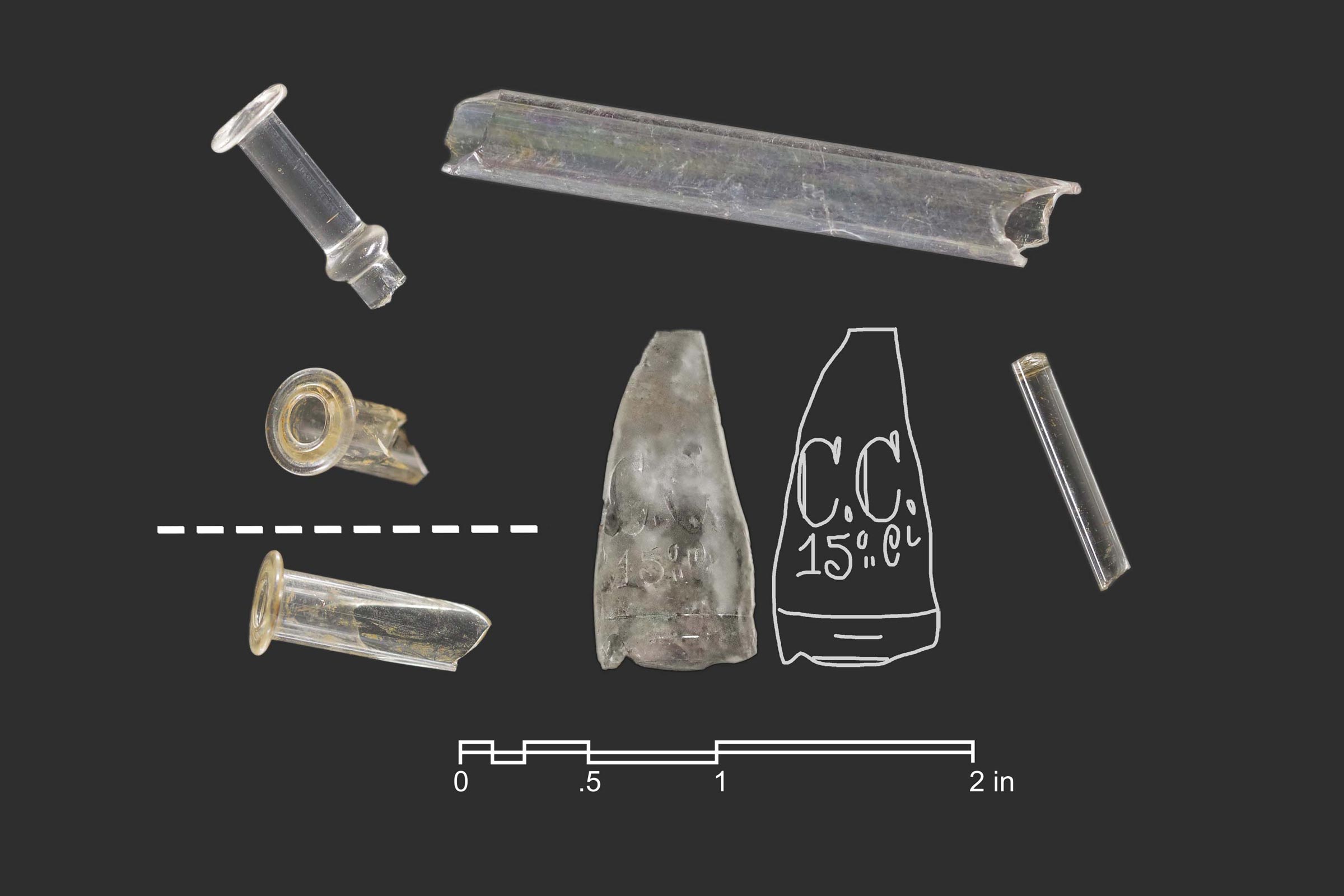 The finds outside Hotel A included fragments of laboratory equipment. The hotel served as a science lab beginning in the 1907-08 academic year. (Photo by Rivanna Archaeological Services)

After more than 200 years, the University of Virginia’s Grounds is still yielding secrets.

Archeologists excavating areas around hotels A and E ahead of planned sidewalk construction have uncovered a fascinating mix of discarded and lost items dating to the University’s earliest days, including a spoon, tableware, a copper alloy tag stamped “Silver Tongued,” bullet casings, a bone die, a stone pendant, and a lady’s amethyst and brass signet ring with the letter “P” engraved.

Some of the items, like the pendant and ring, were most likely lost by their owners. But other items were probably cast into backyard trash piles, as was once common. All reveal details about early University life.

“The only real project surprise was finding a significant amount of artifacts and features related to the Hotel A addition,” Amy Moses, project manager for Facilities Management, said. “We were fortunate to have the funding and allocated time to fully investigate the area before encasing it beneath a sidewalk.”

Workers with Rivanna Archaeological Services began the excavations in March 2021 as part of an effort to replace the gravel walkway behind the West Range with a brick surface at the behest of the Office of the Architect for the University. 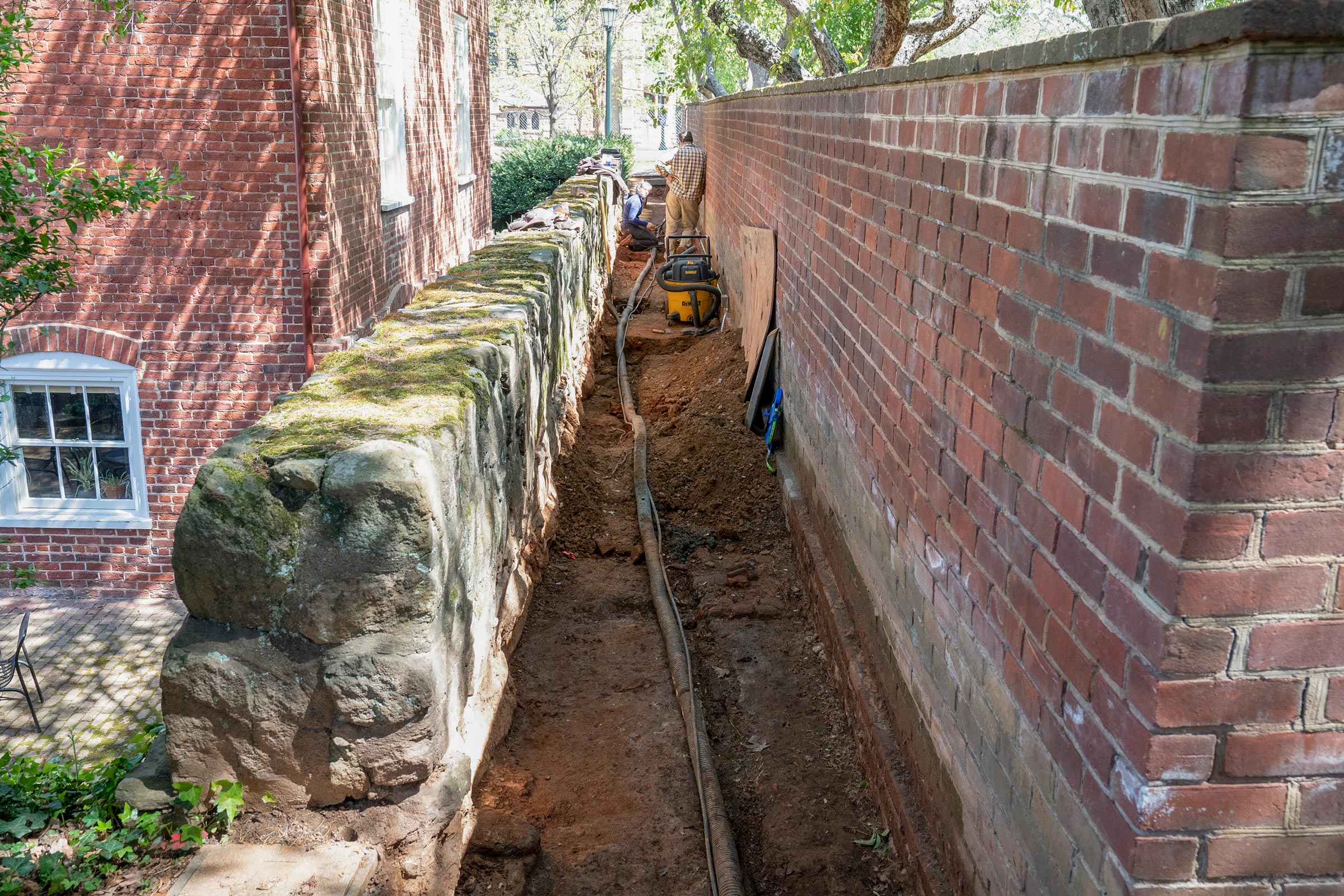 The archaeological excavation next to Hotel A turned up a cache of artifacts. (Photo by Dan Addison, University Communications)

The gravel walkways were not part of University founder Thomas Jefferson’s original design for the Academical Village. They were first introduced with the 1950s Garden Club of Virginia restoration of the Gardens.

“But the stone required a lot of maintenance to remain presentable,” said Brian Hogg, senior historic preservation planner at the Office of the Architect for the University. “It also tended to wash away during heavy rains, going into drains and clogging them.”

The gravel paths have been replaced with brick walkways.

“The brick was chosen to be easier to maintain, eliminate the drain clogs, to be Americans With Disabilities Act-compliant and to blend better with the other walks in the Academical Village,” Hogg said.

“For most of the 19th century, it was common practice for people to dispose of refuse in their own backyards,” said Susan Palazzo, project manager and archaeologist at Rivanna Archaeological Services. “The University attempted sanitary policing, but it was often ineffective. There was an 1848 mention in the faculty minutes of a trash removal system where trash was kept in barrels that would then be removed daily and deposited on the outskirts of the University. A 1909 map shows a trash dump behind the old powerhouse, south of New Cabell Hall.”

The trash deposit at Hotel A, encountered in a unit about 42 feet north of Mews Alley, yielded about 500 artifacts, including glass from windows, containers and laboratory bottles; sheet metal; a porcelain electrical insulator; bird and mammal bones; and several personal items, including a ground lens possibly from a pair of spectacles.

“These excavations behind Hotel A only offer a narrow window into the lives of people who lived and worked at the University, so it is difficult to make a general statement about who they were,” Palazzo said. “We find some artifacts that reflect what we read in University documents.”

Items such as the signet ring and heart pendant were probably lost, not discarded.

“We don’t see a lot of items like that in archaeological assemblages because people care for them and usually don’t leave them behind,” Palazzo said. “The signet ring was a kind popular in the 1890s, long before women could be full students at the University, but there were women living with their families in the hotels and pavilions and visiting from town. The University had summer schools and teaching programs for women.”

“It has confirmed one story, that the hotel keeper at Hotel A got in trouble for slaughtering animals behind the adjacent dorm block, where we found animal bones,” Hogg said. “And provided an interesting insight into how Hotel A was built – into a ravine with the area in front backfilled to make the terrace.” 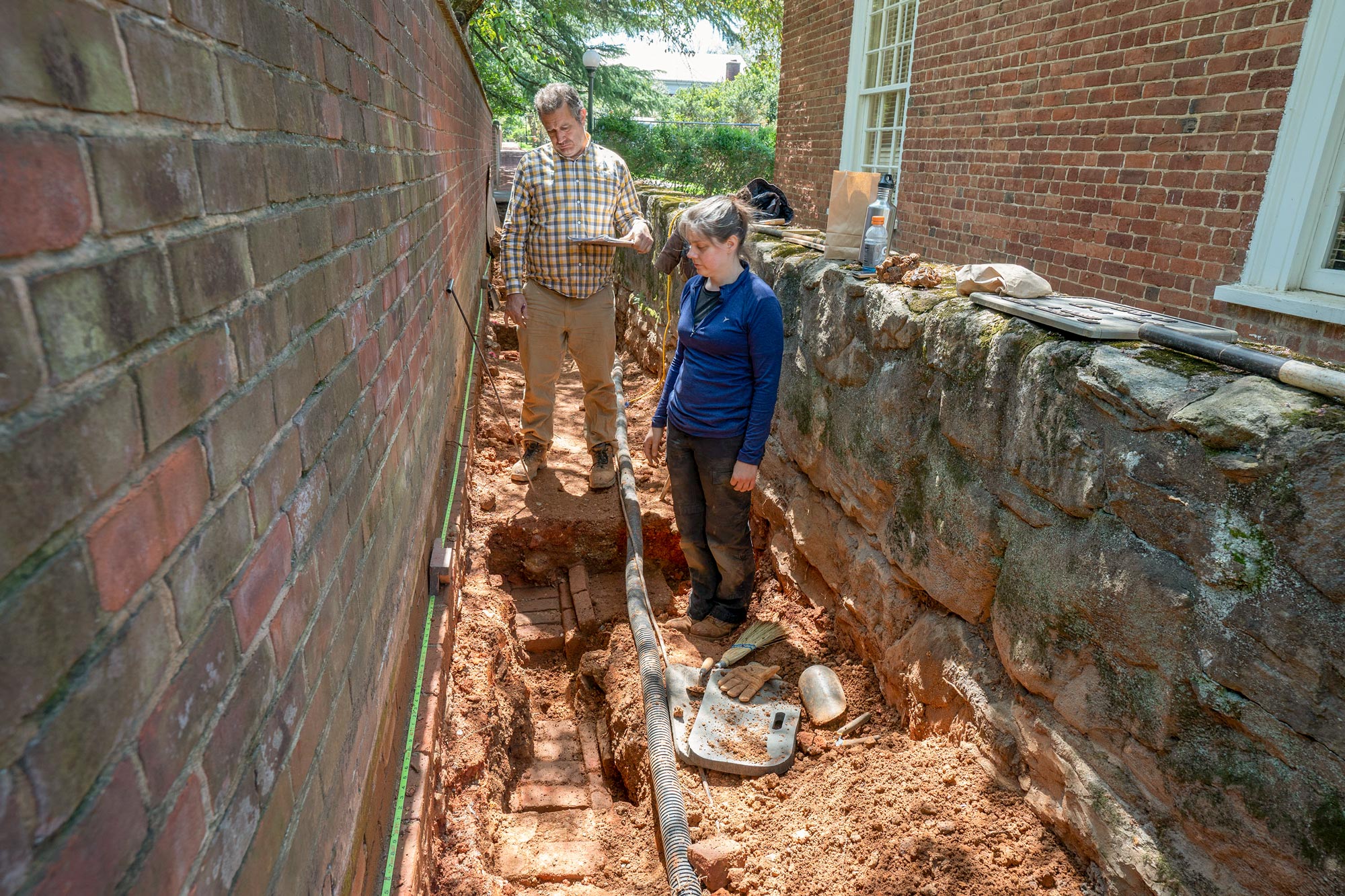 Archaeologists Nick Bon-Harper and Susan Palazzo from Rivanna Archaeological Services examine a gap in the surface drain associated with the Hotel A addition. (Photo by Dan Addison, University Communications)

Hotel A is unique, with a sunken courtyard on the south side and an areaway on the east and north sides. A thick, stone retaining wall surrounded the spaces.

The original hotels could not always accommodate all the students assigned to them or the families of the hotelkeepers. In Hotel A, hotelier Addison Maupin moved the dining hall to the basement so his family could use the first floor. In 1867, the University built a large addition to the east of the hotel to expand the student dining hall.

In the 1907-08 school year, Hotel A was converted into laboratory space for experimental physiology and physiological chemistry. In 1928, the Virginia Quarterly Review moved in, and the addition was demolished two years later when the University renovated or removed several buildings related to medical laboratories. 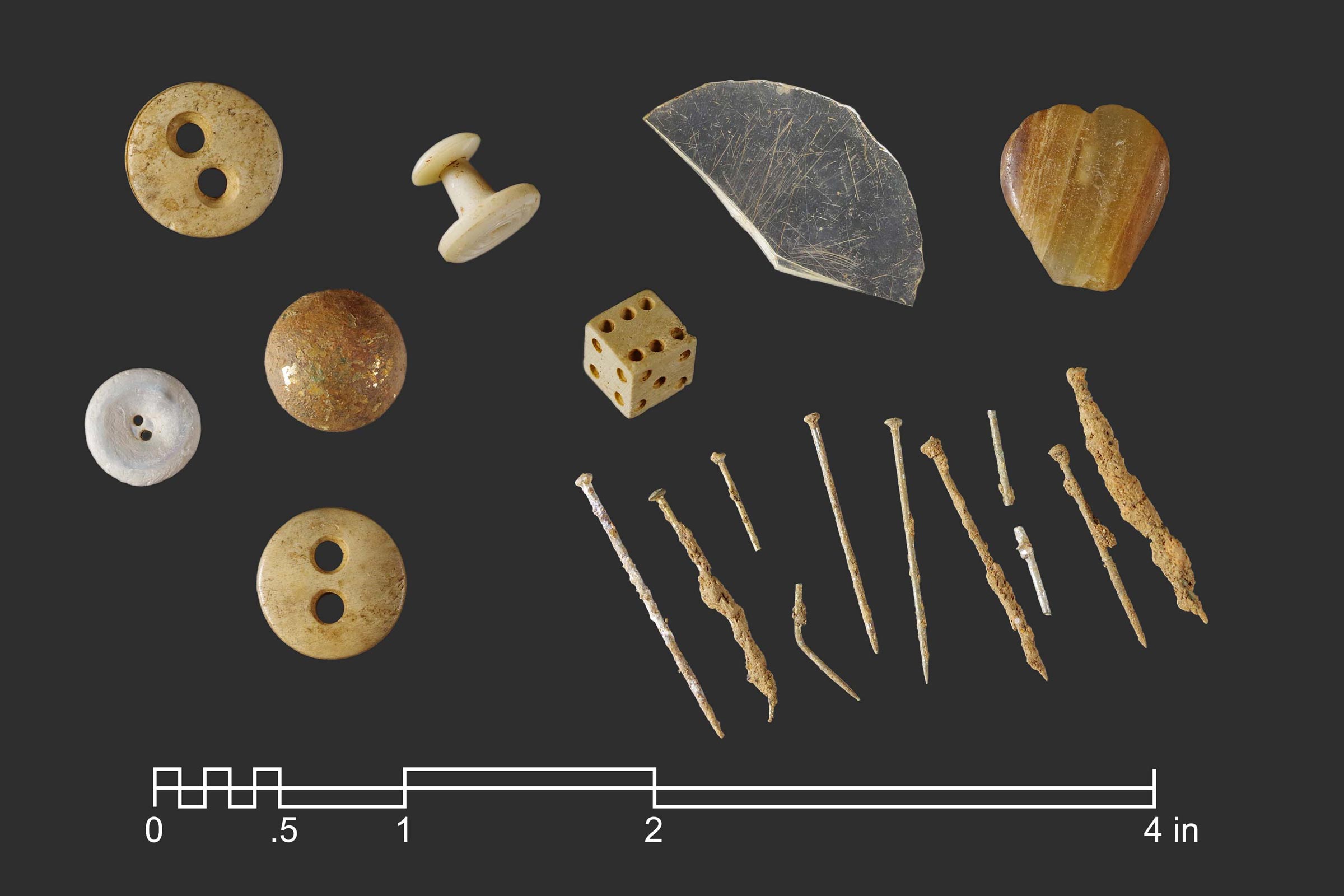 Buttons, die and nails were among the items uncovered in excavations near Hotel A. (Photo by Rivanna Archaeological Services)

Some of the demolition debris was used as leveling fill in Garden I, which supplied more details about the Hotel A addition.

To the archeologists, the excavations may reveal conflicts, like how an unearthed foundation differs from a building’s archived blueprints. Other times, items may confirm a part of University lore.

The bone die - or half of a pair of dice - may support accusations in the 1800s of students and hotelkeepers gambling.

“Mr. Conway, keeper of Hotel A from 1825 to 1843, got in trouble numerous times for gambling and drinking with students,” Palazzo said. “There were also endless complaints about students owning and firing guns on Grounds, and we have seen bullet casings in several contexts around the University.”

Upon completion of the archaeology study, the artifacts will be housed in the UVA Library archaeology collection.