Archaeologists at the University of Virginia have found a 5 1/2-foot section of Jeffersonian serpentine wall underneath a 19th-century building that once was used as slave quarters.

Researchers digging underneath The Mews, a 1,755-square-foot building behind Pavilion III in the Academical Village – the oldest part of the University, designed by founder Thomas Jefferson – discovered the section of serpentine wall and some of the building’s original floor, while the University’s Facilities Management workers unearthed a partial foundation of an extension that was attached to the original building.

The Mews currently houses two apartments – the lower for Housing and Residence Life’s area coordinator, the upper used by the Provost’s Office for visiting faculty. The building has modern amenities and the wood floors in the ground level have been replaced and refinished. 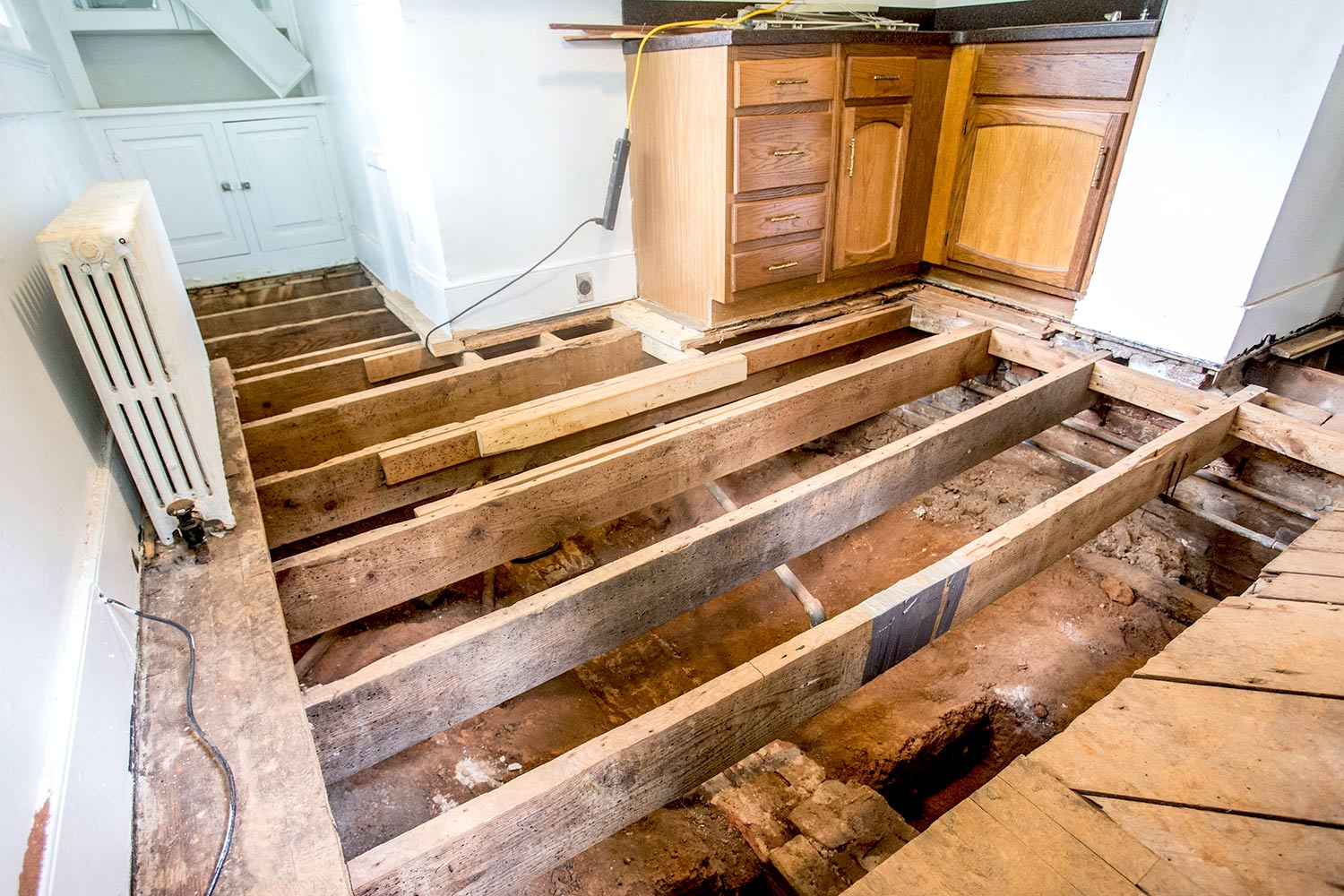 Facilities Management recently expanded the crawlspace underneath the building in anticipation of upgrading its utilities. Since it was a project in the Academical Village, archaeologists from Rivanna Archaeological Services LLC were brought in to carefully examine the exposed soil underneath the floors of the building.

They have found some sections of Jefferson’s serpentine walls  surviving below grade, but the majority of the originals are gone. (Jefferson designed the walls to stand in a wave-like fashion alongside the pavilion gardens, instead of a straight line; though the walls are only one brick thick, the curve keeps them stable – like folding one piece of paper allows it to stand on its own edge.)

“All of the above-grade walls have been rebuilt,” said Brian E. Hogg, senior historic preservation planner in the Office of the Architect for the University. “We have found original sections of walls below grade. A find like this is useful in helping us understand the original gardens, since the gardens are arguably the most changed area of the Academical Village.”

Hogg said Jefferson did not specify how the gardens were to be used, leaving each of the 10 pavilions’ occupants to use the spaces to fit their needs.

“There were dozens of support buildings behind the pavilions,” Hogg said. “Several of them survived into the second quarter of the 20th century, before the garden restoration, but they were taken down as they were seen as undesirable.”

The core of The Mews was constructed around 1829 as a support building for Pavilion III, which was then occupied by law professor John T. Lomax. The one-and-a-half story structure contained a kitchen and slave quarters. 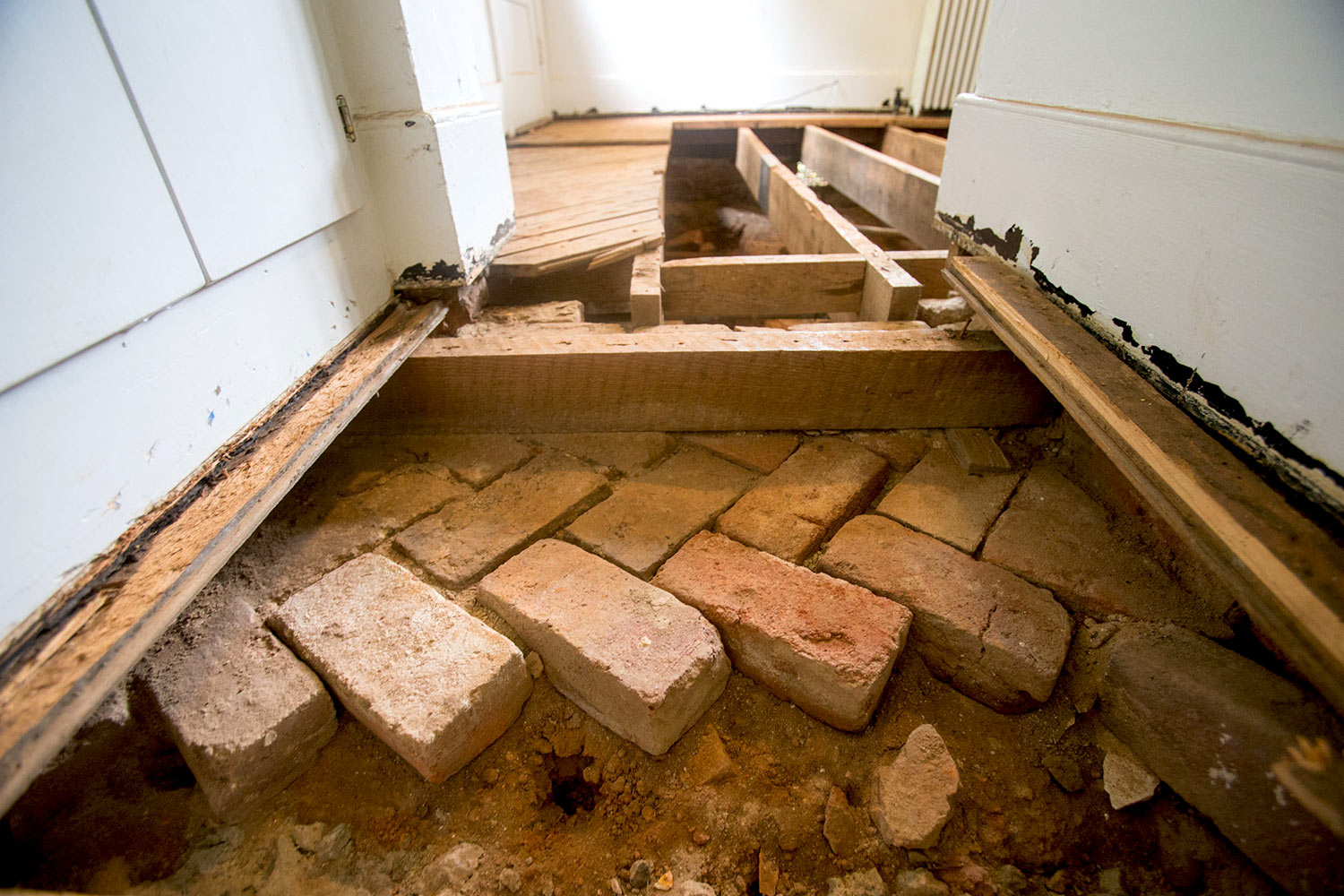 Ben Ford, of Rivanna Archaeological Services, said the recently unearthed section of serpentine wall predated the original building by about seven or eight years, dating it among the University’s oldest structures. Straight brick walls that extended from the pavilion framed the upper end of the garden, and the kitchen structure was built using two of these garden walls as its exterior walls. A later addition also used a garden wall as part of the structure.

“In its early years, [The Mews] served as a quarters for enslaved people, and may also have served before 1865 as a washhouse and apparently, a chicken house,” said Kirt von Daacke, co-chair of the President’s Commission on Slavery and the University. “The building is important because it is one of only a handful of extant structures where enslaved people lived and worked. Almost every pavilion and hotel garden space had a free-standing kitchen, a cottage or dormitory, chicken coops, smokehouses and the like built in them.” 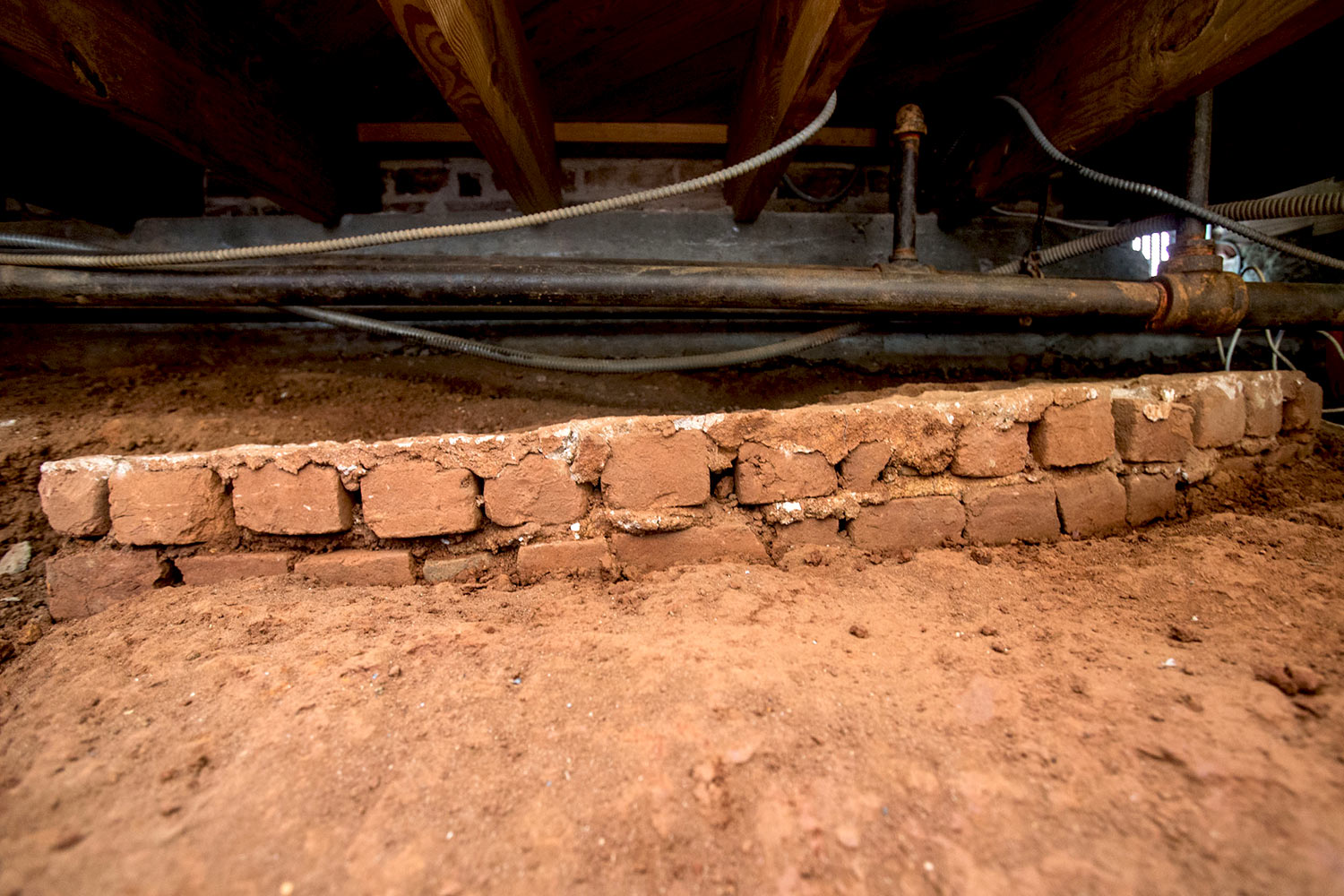 The other remaining structures where slaves once lived are the Crackerbox, on the East Range near Randall Hall, and McGuffey Cottage, behind Pavilion IX. Some of the cellar rooms beneath the Lawn rooms on the east side and a handful on the west side were also likely spaces where the enslaved lived or worked.

Von Daacke said Lomax may have requested the construction of a separate cook’s kitchen.

“Most pavilion residents moved the cook’s kitchen out of the main house,” he said. “Jefferson had designed the pavilions with the kitchen in the basement, but residents, likely due to concerns about heat, fire, noise and enslaved people being in too close contact with white pavilion residents, generally sought to create separate kitchens.”

In 1833, Alfred T. Magill, a professor of medicine who lived in Pavilion III from 1833 to 1837, wrote that he had, “a kitchen detached from the house … an excellent smokehouse, an ash house and a garden sufficiently large to raise most of our vegetables in.”

Later Pavilion III tenants twice expanded The Mews. The first expansion, around 1881, extended the building toward the pavilion and raised the roof to accommodate a full second floor. The second project, completed in the 1930s, included a one-story addition on the west end of the structure, housing a modern kitchen. The latter was accomplished under the direction of author Agnes Rothery, wife of music professor Harry Pratt, whom Rothery credits with coming up with the name, “The Mews.” 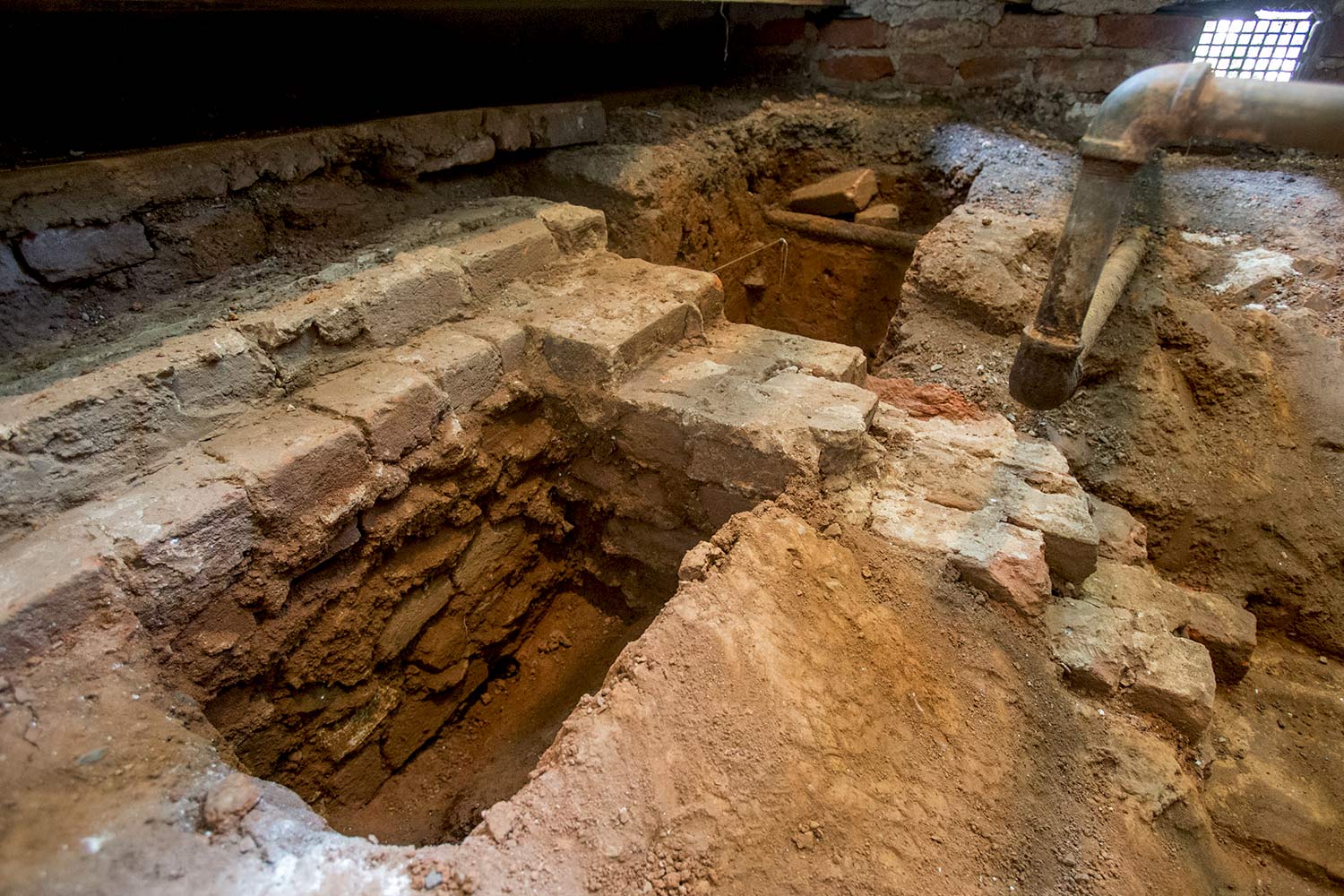 Two other alterations came and went. In 1907, a porch was added to the west and south elevations of the structure, and in 1929, another porch connected the Mews to Pavilion III. Both porches were later demolished.

An 1856 engraving by E. Sachse & Co., published by Casimir Bohn, depicted a small extension on the western side of the original structure. Rothery described it as “a small lean-to which could be converted into a kitchen.” Archaeologists believe the foundation remains recently found under the current kitchen are from that extension. Ford said Rivanna’s archaeologists found no evidence of the extension’s purpose, but said the foundation, while only 6 by 12 1/2 feet, was about 1 foot thick, unusual for a small lean-to addition. It was not centered on the original kitchen building and may pre-date that structure.

As part of the recent project, crews built access hatches into the floors so archaeologists can continue exploring underneath the building and workers can reach the utility lines.

An interior staircase, removed when the building was divided, may eventually be restored if the building is returned to a single residence.

What Is the ‘4th Side’? END_OF_DOCUMENT_TOKEN_TO_BE_REPLACED