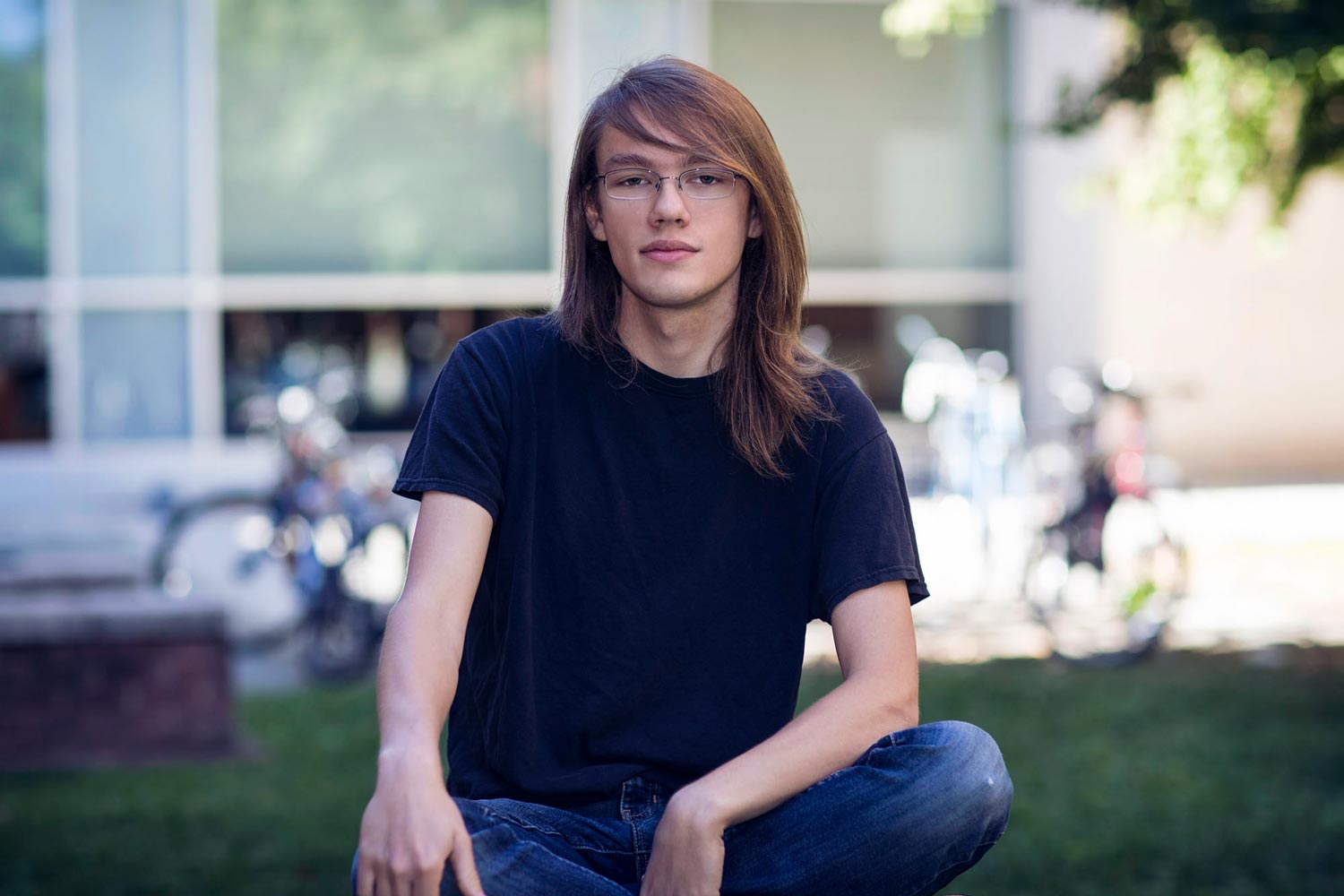 Stephen Stetzler is seeking to use his passion for physics and computing to “push fundamental particle physics beyond the standard model.” (Photo by Dan Addison, University Communications)

Stetzler, of Kutztown, Pennsylvania, a fourth-year physics and computer science major at the University of Virginia, has received a $10,000 scholarship from the Astronaut Scholarship Foundation to help him in his questioning.

“My research interests lie at the intersection of physics and computing, which has led me to the fields of high-energy physics and astrophysics,” he said. “High-energy physics is the study of phenomena on extremely small scales, and astrophysics is the study of phenomena on enormously large scales. I want to work in these two fields because they address the questions important to me, and both fields have really interesting computational problems that need to be solved, intersecting neatly with my interest in computer science.”

Stetzler enjoys merging physics and computing, and has performed research on the Mu2e experiment, which he described as “an experiment dedicated to pushing fundamental particle physics beyond the standard model.” This summer, he worked at the National Radio Astronomy Observatory’s Very Large Array in New Mexico, studying the population of binary pulsars, which he thinks are the most fascinating objects in the sky.

“In the future, I hope to exist at the boundary between my two loves: physics and technology,” he said.

Physics professor E. Craig Dukes, who leads the Mu2e Cosmic Ray Veto group, which is performing an extremely sensitive search for new physics by helping uncover the mystery of the matter/anti-matter asymmetry in the early universe, praised Stetzler for developing an inexpensive way to measure machine parts for the project within a 1,000th of an inch.

“Steven came up with a simple device to do the job: an inexpensive flat-bed scanner with software he wrote to recognize the shapes and measure the sizes and positions,” Dukes said. “It works like a charm. We checked his measurements of a few score parts with those done by a high-end coordinate measuring machine at the Fermi National Accelerator lab, which specializes in high-energy particle physics. This project he did alone and it demonstrated his impressive software skills – among the best I have seen in a field chock full of talented programmers – as well as his interest in machine vision.”

“Steven is a highly motivated young man, who is extremely talented,” Dukes said. “His academic record is outstanding; he simply excels at everything he does, and he has a real thirst to learn physics. He is a star in our department, one of two students who were selected from a class of more than 50 to represent the department at PhysCon 2016 [the Scientific Conference on Physics and Control] in San Francisco. Clearly he is a young man to be reckoned with. I expect to hear great things from him in the future. This scholarship will help him meet that future.”

Stetzler is a member of the Raven Society, the Sigma Pi Sigma Physics Honor Society, the Society of Physics Students, WXTJ Student Radio and the Quest Scholars at UVA. He has received a Deaver Scholarship from UVA’s Department of Physics and a Science Systems and Applications Inc. Academic Scholarship from the Society of Physics Students. A graduate of Kutztown Area High School, he plans to pursue a Ph.D. in physics.

“I think I would enjoy working as a researcher doing the fundamental science that I love for as long as possible at a university or a national lab,” he said.

“My experience is that Steven is a pleasure to work with and capable of solving the most challenging of technical projects,” Craig Group, an associate professor of physics, said. “He has a subtle sense of humor, and he has taken a huge leadership role in our department: heading the society of physics students, proposing new courses and serving as a mentor to other students. He takes on more than anyone should and manages to pull it all off. I think he is fantastic.”

Stetzler said receiving the scholarship validates his hard work as a physicist and the money is going toward paying for his undergraduate degree.

“Being able to be independent and pay for my own education is incredibly important to me,” he said. “But the non-monetary portion of the scholarship is just as important. Receiving the scholarship means becoming a member of the Astronaut Scholars, a group of like-minded individuals dedicated to science, engineering and innovation, which is an incredible honor. Being a part of this society means I will always be a part of an extensive network of leaders in science and technology. I’m excited to see where my peers and I will go after receiving this scholarship.”

The Astronaut Foundation was created to support top scholars in science, technology, engineering and mathematics while commemorating the legacy of America’s pioneering astronauts.

How a Single Email Changed a Life END_OF_DOCUMENT_TOKEN_TO_BE_REPLACED

Fall Is in the Air on Grounds END_OF_DOCUMENT_TOKEN_TO_BE_REPLACED

At UVA, There Is a Club for Everyone END_OF_DOCUMENT_TOKEN_TO_BE_REPLACED