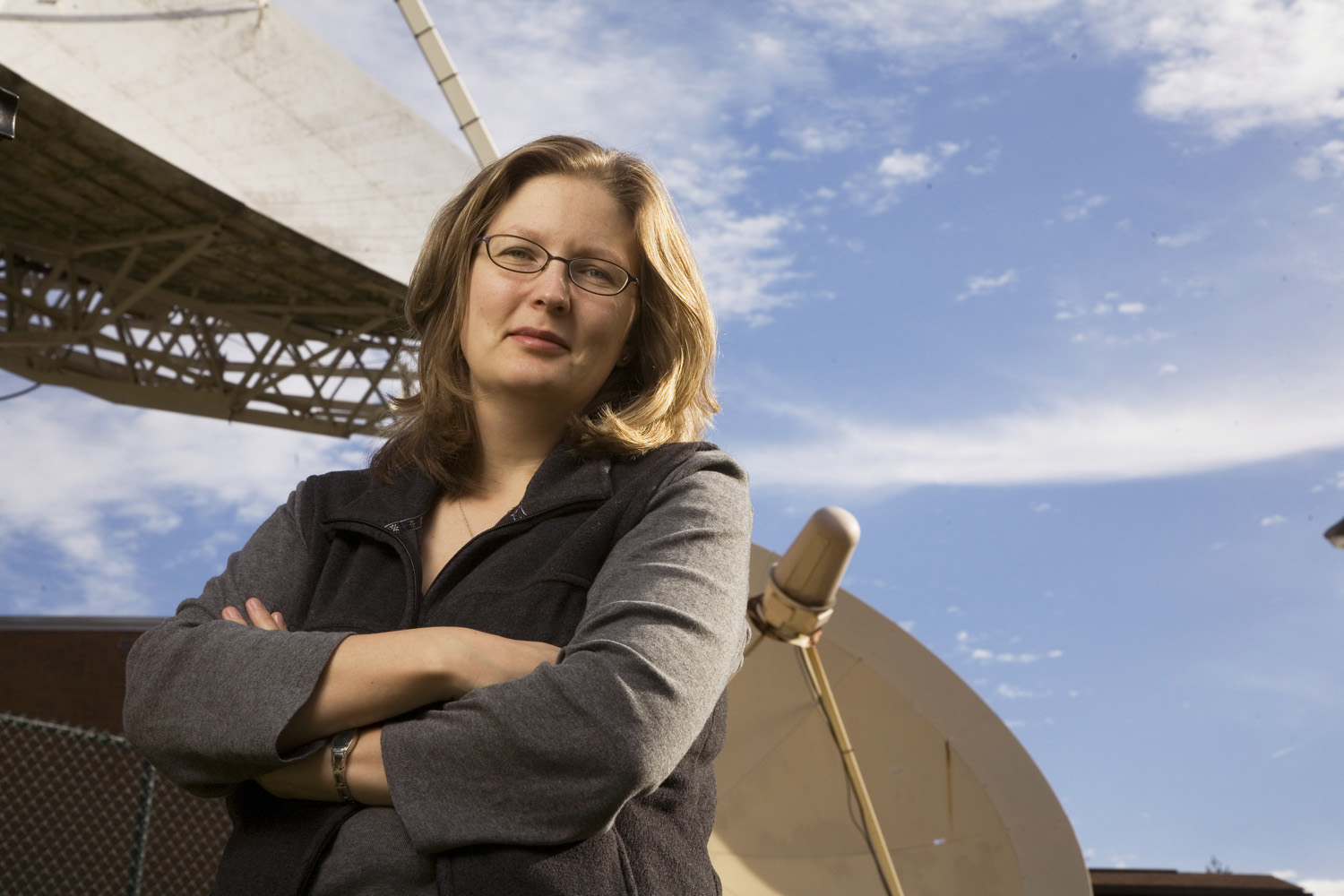 Oct. 8, 2007 -- What would you do with $625,000? Kelsey Johnson would search for the conditions of the beginning of the universe. That’s exactly what she intends to do with a five-year, $625,000 grant she has won from the David and Lucile Packard Foundation.

Johnson, an assistant professor of astronomy at the University of Virginia, recently was named a Packard Fellow, a prestigious distinction awarded to 20 top young researchers nationwide from a variety of scientific disciplines.

Johnson is now one of two Packard Fellows in her department and one of five at U.Va. Only a handful of astronomy departments in the nation have more than one, and few universities have as many as five.

The grant will allow Johnson to enhance her research on globular star clusters and the development of the early universe. “Globular star clusters – regions that are crammed with millions of stars – are the most ancient objects in the universe,” Johnson said. “They are essentially fossil records of what happened at the beginning.

"By studying globular star clusters, we can gain understanding of where the universe came from and, in a sense, where we came from and how we got here. I try to tease out the secrets of the early universe.”

Johnson plans to use her new funding to conduct preliminary research that will help her and other U.Va. astronomers lay the groundwork for observations that soon will become possible with the development of the Atacama Large Millimeter/Submillimeter Array, a massive $1 billion international radio telescope currently being constructed in Chile. ALMA will be the largest and best radio astronomy observatory in the world.

Competition is keen among astronomers to gain limited observational time on the array, and it would be a major research opportunity for U.Va. to be heavily involved with the project.

“ALMA is the biggest thing in earthbound astronomy and we need to be a part of it,” Johnson said. “To get our [observing] proposals accepted will require a lot of preliminary research. We will need a great data set to put us forward as front-runners.”

Gabriel Robins, a professor of computer science and a 1995 Packard Fellow who served on the U.Va. committee that nominated Johnson for the fellowship, said the Packard Foundation is interested in ambitious, far-reaching studies rather than the incremental advances of everyday science. “They are looking for rising ideas that go out on a limb with the possibility of failure, but also the possibility that they will lead to great new discoveries that will change our knowledge to the core.

“Kelsey’s work is a grand investigation into the fundamental and beautiful stuff of the universe that grabs you by the hairs of your curiosity,” he said. “She is addressing fundamental and intriguing, wide-ranging, cosmic-scale questions into the fabric of the universe. Her work is about creation in action, the very notion of how everything came to be in its infinite glory, back to the very point of ‘Let there be light.’”

“With this fellowship Kelsey joins an elite group of young researchers,” said John Hawley, chairman of the astronomy department. “It is testimony to her outstanding past accomplishments and to the scientific merit of her proposed research. The fellowship demonstrates that she is not only an outstanding astronomer, but an outstanding scientist – period – among a broad peer group.”

Steven Majewski, a professor of astronomy who won a Packard Fellowship in 1997, said the grant provides an extraordinary opportunity for young investigators to conduct nearly unencumbered research. “The foundation encourages much more research flexibility than most of the other funding organizations,” he said. “A Packard fellow can do more creative and speculative investigations. The foundation seeks people who think outside the box and can incorporate ideas from other areas and disciplines. Packard Fellows are the movers and shakers, the people most likely to conduct distinctive research throughout their careers.”

“It shows the star quality of our department,” Majewski said.

“Kelsey Johnson is one of our brightest young investigators,” added R. Ariel Gomez, vice president for research and graduate studies, the U.Va. office that leads each year’s search for potential Packard Fellow nominees. “Her astronomical breakthroughs and ambitious plans have earned recognition not only for her, but for U.Va.’s Department of Astronomy.”

“Johnson’s success in now attaining the prestigious Packard fellowship is a demonstration of how important it is for the University to support top junior faculty members in their early research endeavors,” Gomez noted.

Johnson came to U.Va. in 2004 as a Hubble Fellow and joined the astronomy faculty in 2005. She earned her bachelor’s degree in physics from Carleton College and Ph.D. in astrophysics from the University of Colorado. For three years prior to coming to U.Va. she was an NSF Astronomy and Astrophysics Postdoctoral Fellow with the National Radio Astronomy Observatory and the University of Wisconsin.

In addition to Johnson, Robins and Majewski, U.Va.’s other Packard Fellows are Robert Jones (physics, 1996) and Hillary Bart-Smith (mechanical and aerospace engineering, 2003).