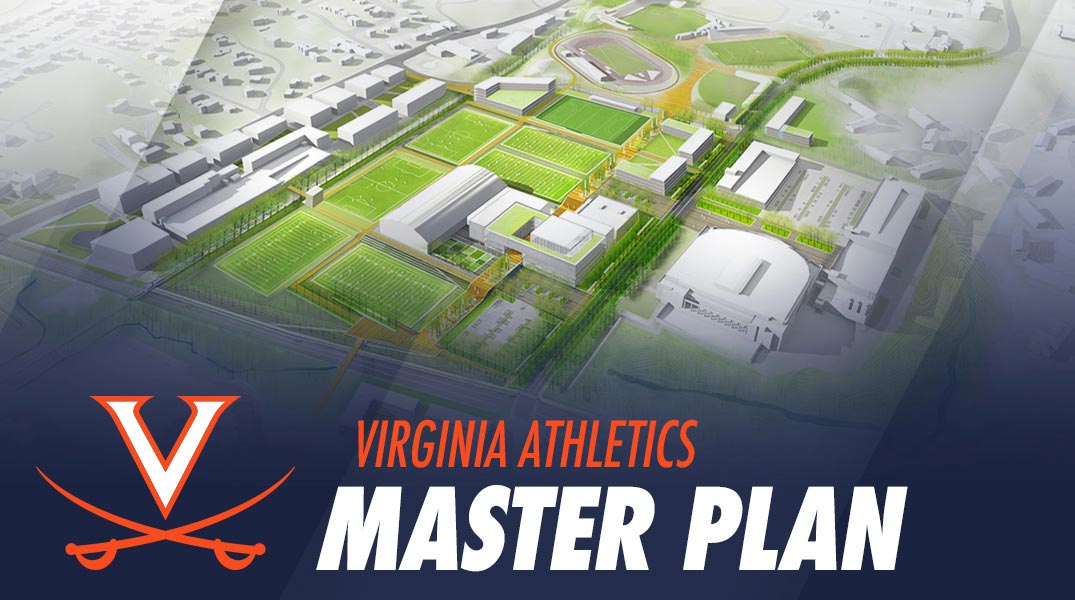 Carla Williams walked out of the Rotunda with a deep sense of gratitude. She was coming from a meeting at which the University of Virginia’s Board of Visitors approved a master plan designed to transform the athletics precinct on North Grounds.

Simply put, UVA needs new facilities for its football program and the vast majority of its Olympic sports programs. The evidence of that need is clear, and Williams has launched one of the most ambitious initiatives in the history of the department.

“It’s a lot on the front end of a tenure,” said Williams, who began as UVA’s athletics director in December, “but we aren’t doing this just to do it. We are doing this because we must. The circumstances require us to act, and we view this as a tremendous opportunity.”

Williams knows that more hurdles must be cleared before the master plan becomes reality. The estimated cost of the project, whose centerpieces will include a new football operations center and a new Olympic sports center, is $180 million.

“We need to invest in our football program for the long-term stability of our entire department,” Williams said. “However, it is also obvious that our Olympic sports that occupy University Hall and Onesty Hall need a new home.”

The master plan also calls for the construction of three natural grass practice fields – two for football, the other one for multiple sports – and the renovation of the McCue Center. Since it opened in 1991, the McCue Center has housed UVA’s football team. It also includes offices for athletics administrators and most of Virginia’s Olympic sports coaches.

Of the other schools in the ACC, all have renovated their football support facilities – or built new ones – since the McCue Center opened.

“This project will enhance the brand of the institution while signaling to everyone in college athletics that football matters at Virginia,” said Bronco Mendenhall, who’s in his third season as the Cavaliers’ head coach.

In the meantime, Mendenhall said, “My job is to build momentum within our program leading into not only the construction, but the completion of [the new facilities], so that becomes the tipping point and UVA football never looks back.”

Williams and her staff will work closely with the Virginia Athletics Foundation to raise funds for the project. She noted that VAF raised approximately $135 million for John Paul Jones Arena, which opened in 2006.

“We want to make sure our sports programs are a source of great pride for the University, the community and the commonwealth,” Williams said. “These facilities allow us to create that type of long-term culture, and we know we have to raise the funds to make this a reality.

“It’s going to take a relentless and sustained effort from everyone to get to the finish line, but I am very hopeful, because of the passion I’ve seen from supporters who absolutely love the University of Virginia.”

At a June meeting in the Rotunda, Alice Raucher, the University’s architect, reviewed the proposed master plan with the Board of Visitors’ Building and Grounds Committee. Last week, Raucher went over the plan in more detail with the full board, which then unanimously approved the proposal.

“Every time I’ve had the opportunity to talk to our donors about it, I think everyone has understood that we’re constructing something to meet the needs of our student-athletes,” Williams said. “It is not in our nature to do anything excessive. Our facilities will be functional and meet the needs of our student-athletes and staff. That’s just who we are.”

University Hall, Onesty, the Cage and the sports medicine facility will be demolished by the spring of 2019. Asbestos abatement in U-Hall, Onesty and the Cage must occur before demolition can begin.

Most of the coaches, staffers and student-athletes who use those buildings are being relocated to locker rooms and offices in temporary modular units in the Cage parking lot. The wrestling team is moving to Memorial Gymnasium, where the volleyball team already was based.

Williams said she hopes at least two of the new natural grass fields will be ready before the fall of 2020. Currently, the football team must travel to Lambeth Field or Scott Stadium to practice on natural grass.

The new practice fields, coupled with the new operations center, will allow the football team to prepare and train more efficiently.

“It’s a race against the clock every day,” Mendenhall said. “Every football team has the exact same number of hours [under NCAA rules]. The teams that can teach most effectively, transition most effectively, have the resources to enhance performance most effectively, and attract players to their programs, those teams have the best chance to have success.”

Ideally, Williams said, construction of the football operations center and Olympic sports center would begin in 2020.

“It’ll take at least two years to build those facilities,” Williams said. “And so hopefully by the summer of 2022 we would have those completed and be able to move in, and then we could start the renovation of McCue.”

However challenging this project might be for the athletics department, “it has to happen,” Williams said.

“We obviously want to be competitive. We want to compete for championships, and over time if there isn’t a re-investment in the facilities and in the programs, the results become apparent. Virginia Athletics is uniquely positioned, in part because of the outstanding academic reputation of the University, to reset the standard for not only college athletics in general, but college football in particular.”

Even with aging facilities, UVA has fared well in most sports. In the Directors’ Cup competition, which measures schools’ performances in NCAA championships, Virginia has finished in the top 25 nationally in each of the past 12 years.

“Craig [Littlepage] hired some phenomenal coaches, and that’s where it starts,” Williams said of her predecessor as AD. “But at some point, there’s only so much great coaches can do without facilities and an operating budget to support their efforts. And so that’s where we are.”

Many UVA teams will be inconvenienced in the short term. But the coaches whose teams will be affected understand the long-term needs of the athletics department.

“We have a unique and once-in-a-lifetime opportunity to push UVA into the forefront of college athletics with this new master plan,” head women’s soccer coach Steve Swanson said.

ZGF Architects, which has an office in Washington, D.C., will design the new facilities.

The new football operations center will feature a locker room, position rooms, a team meeting room, an equipment room, and coaches’ and staff offices, as well as areas for strength and conditioning, sports medicine, sports nutrition and video operations.

Most of the teams that use U-Hall, Onesty Hall and the Cage will be based in the new Olympic sports center. The building will include coaches’ and staff offices, team areas, locker rooms, practice and training areas, a video operations center, areas for strength and conditioning and sports nutrition, and an equipment room.

“I can’t stress enough the importance of the new Olympic sports complex to the success of our program,” head wrestling coach Steve Garland said.

“We want to win at the highest level, and a facility like that positions us to compete with the most successful programs in our sport. More specifically, this building will be a game-changer in terms of recruiting for our program, while providing the best possible training environment for our current student-athletes. As an alumnus and former competitor here at UVA, I can tell you that this facility will be something we can all be proud of for years to come.”

The Olympic sports facility also will be home to the Center for Citizen Leaders and Sports Ethics. This center will be part of a new comprehensive student development program that will collaborate with the University’s academic departments and centers to provide educational opportunities in such areas as career, leadership and personal development as well as community engagement and academic achievement.

The master plan also aims to better connect Central Grounds and North Grounds for pedestrians. It includes a connection from the Lambeth Field student housing area and the Goodwin Bridge to a plaza and a pedestrian promenade in the athletics precinct.

“I am so incredibly thankful to the University, and to the Board of Visitors, for approving the plan,” Williams said, “because it is transformational for UVA. Now, it is time to make it happen.”