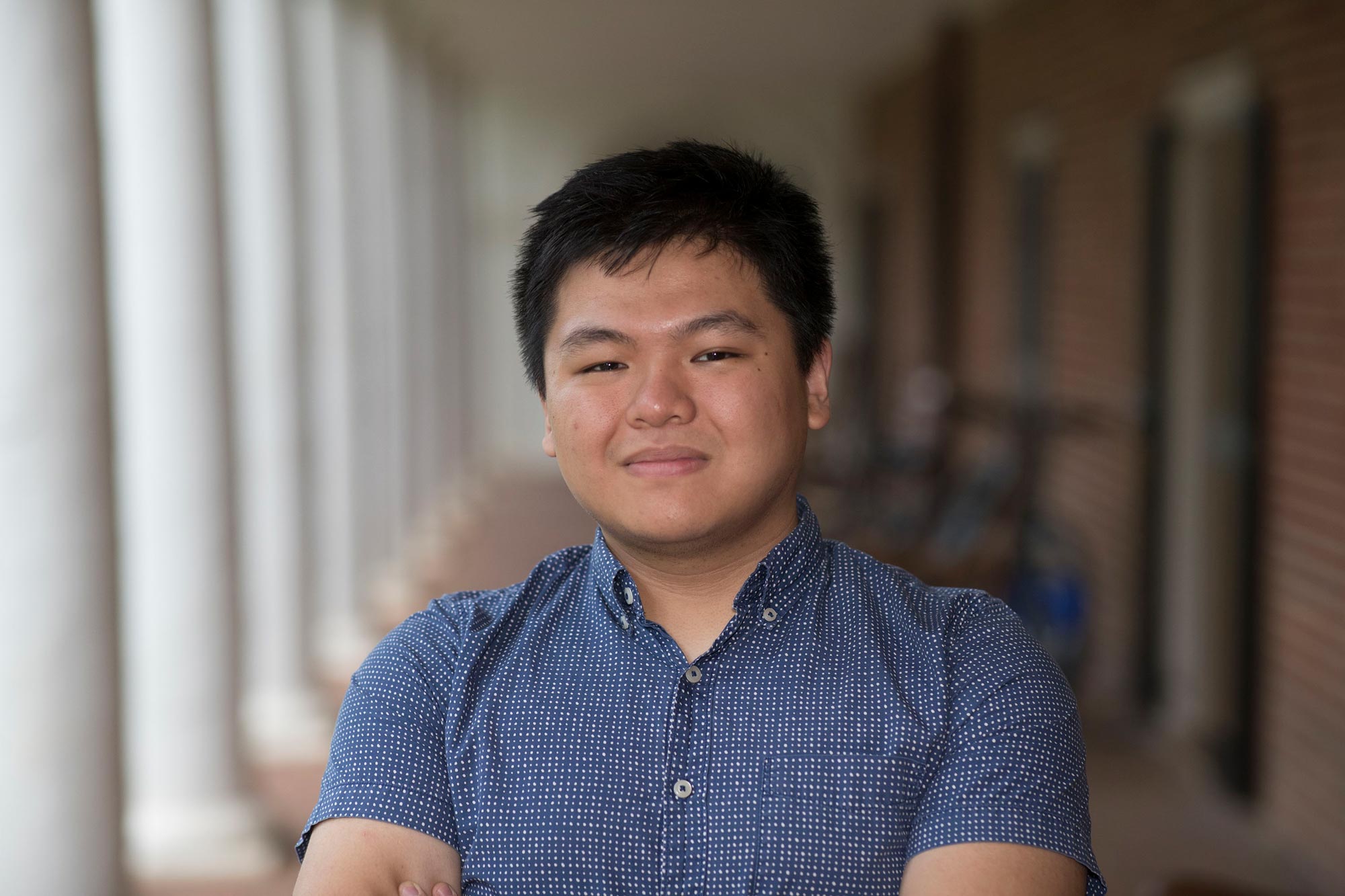 Jonathan Zheng is on multiple paths to discovery, as both an engineer and a writer.

Zheng, of Manassas, a fourth-year chemical engineering major in the University of Virginia’s School of Engineering, was recently awarded a scholarship from the Astronaut Scholarship Foundation, one of 52 such scholarships awarded to students from 38 universities across the country. The foundation aims to foster American leadership in technology and innovation while honoring the legacy of pioneering astronauts.

Zheng said he uses art and engineering to explore his creative, “curious” side. A fiction writer who has published some short stories, Zheng also dabbles in producing music, which to him means “playing around with music without being very good at it.” A piano player, he enjoys music that experiments with building unusual patterns using everyday sounds, such as rapping on a tabletop.

“For chemical engineering, and for literature and music, there is always a blank canvas, an unexplored space,” he said. “These are all forms of expressing and exploring that space cerebrally, using the mind and using your vision.

“Art and science are closer in essence than they are different. They’re both forms of figuring out how to make something new.”

Zheng credits his creative side with helping him solve problems.

“There are a lot of problems you can’t figure out at first glance, so you might try one approach 10 or 15 or 20 times, get no progress or very little progress, and it might be a better course to take a break and sit on that problem for a little while and then come up with a creative approach that ends up circumventing all those problems,” Zheng said. “Sometimes the value of crazy ideas is not that they can be right, but that they will get you thinking a train of thought that is right.”

His love of problem-solving brought Zheng into engineering. In high school, he enjoyed math and science because they were built on solving problems, and that was key to his consideration of UVA’s offerings.

“I wanted to learn about the natural world, and chemical engineering seemed right,” he said.

As a student, problem solving in engineering and math takes up much of Zheng’s time, leaving little space for music, pleasure reading and the competitive computer games he played when he was younger. He still gathers with high school friends on breaks to play Dota 2, a five-person team strategy game for which he and his teammates won third place in a high school league tournament.

“I am trying to prioritize my time to get as much out of my educational experience as I can, whether its meeting people or learning new things,” he said.

But even new things are not always new. In writing, he posits, over the course of history millions of writers have expressed countless ideas that have been expressed before, and use a stream of time-honored techniques to express themselves.

“Similarly in engineering research, there is a specific unknown, such as ‘How can we get this catalyst to do x, y or z?’” he said. “How do we design this reactor or this space shuttle to do this?’ You rely on past designs and past engineers and past research to make something new to solve that specific unknown.”

“A lot of the time it is easier to convey a research project if you frame it like a story. There is always a central problem, unexpected obstacles that come up, and then presumably some sort of resolution or discovery. The researcher guides the path similar to a writer weaving a story. ”

Some of his current research has focused on finding a cheaper way to convert methane, the main component of natural gas and a byproduct of oil drilling, into methanol, a liquid that can be used directly as a fuel or as an alternative to petroleum as a feedstock for the chemical and fuel industries. He most recently worked with Gordon Brezicki, a graduate chemical engineering student, on a Double Hoo research project.

“Jonathan has been a reliable research partner, as well as a hard-working and independent researcher in our lab,” Brezicki said. “He took on a difficult project and made some real progress. He was also able to very quickly master the use of complex lab equipment.”

The leader of that lab, Robert J. Davis, Earnest Jackson Oglesby Professor of Chemical Engineering, has also been impressed.

“Jonathan had extensive research experience in my lab before being selected for a Double Hoo award, and he participates in my lab activities as if he were one of my graduate students,” Davis said. “His independence was demonstrated when Gordon spent an extended period of time with collaborators in Berlin. Jonathan synthesized and evaluated his new materials as potential catalysts while Gordon was away.”

Zheng works with nanomaterials, exploring how catalysts function at a molecular level to see if their performance can be improved.

“I want to study nanomaterials for solving future problems in energy, health care, any range of fields of applications,” Zheng said. “I could see myself eventually leading a research group to solve these same problems.”

Aside from solving problems, Zheng’s creativity helps him express his research and ideas.

“A lot of the time it is easier to convey a research project if you frame it like a story,” Zheng said. “There is always a central problem, unexpected obstacles that come up, and then presumably some sort of resolution or discovery. The researcher guides the path similar to a writer weaving a story.”

While Zheng is honing his skills as a writer, his engineering skills have been lauded, most recently with the Astronaut Scholarship. The scholarships are awarded to students in their third and fourth years of college studying science, technology, engineering or mathematics and planning to pursue research or advance their field upon completion of their final degree.

Zheng has already received Goldwater, Rodman, Robert Thomson and Tau Beta Pi scholarships and he and a research partner have received a Double Hoo research award.

The latest award offers Zheng access to other Astronaut Scholars.

“It is a network of people who are also interested in exploring, discovering and creating,” he said. “It is really special to have peers like that, people to learn from.”

Zheng attended a meeting of the Astronaut Scholars shortly before the fall term. He said other recipients offered to discuss research with him and put him up if he visited their areas.

“I think it has been an amazing opportunity for me to accelerate my own growth and my own learning, and I am really excited to see what the future brings me,” Zheng said.

“Jonathan is an impressive young researcher who intends to be at the forefront of scientific discovery throughout his life,” said Andrus G. Ashoo, director of UVA’s Office of Citizen Scholar Development. “That desire made him an excellent candidate for the Astronaut Scholarship. What I appreciate most about Jonathan, though, is his concern for others and growing as a person. It has been a delight to work with him.”

He was co-author of an article in ACS Catalysis, published by the American Chemical Society. A graduate of Thomas Jefferson High School for Science and Technology in Fairfax County, Zheng plans to pursue a Ph.D. and conduct research in chemical engineering and nanoscience.

When Less Is More: How Harnessing the Power of Subtraction Can Add to Life END_OF_DOCUMENT_TOKEN_TO_BE_REPLACED