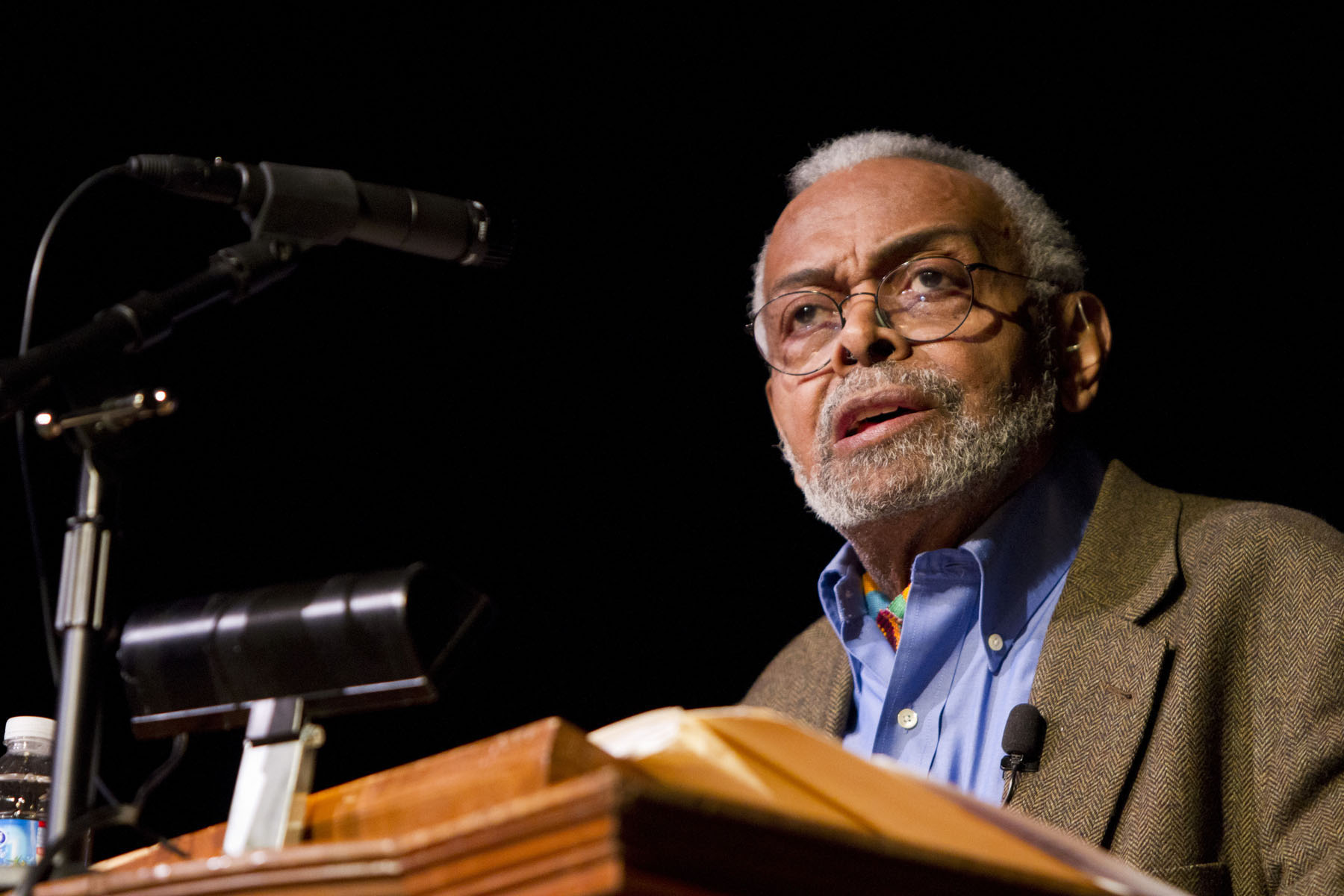 January 28, 2011 — Amiri Baraka – poet, playwright, composer, activist and teacher – treated a Thursday night audience of several hundred in the University of Virginia's Culbreth Theatre on to a lively talk about the importance of knowing 20th-century African-American history, peppering his stories, poems and political commentary with excerpts from the Rev. Martin Luther King Jr.'s speeches and letters.

The event was the last in January's lineup of the University's Martin Luther King Jr. Community Celebration, coordinated at U.Va. by Dr. Marcus Martin, interim vice president and chief officer for diversity and equity, and his team.

Events in the two-week commemoration of Martin Luther King featured talks, panel discussions, music and film that related to King's legacy through a range of topics from history to health care.

"This year's Martin Luther King Community Celebration exceeded our expectations," University President Teresa A. Sullivan said. "The celebration brought together members of our community to reflect on King's legacy and to discuss our roles in a diverse society. I'm grateful to Dr. Marcus Martin and to the community organizers who planned such a meaningful schedule of events. I hope the conversations that we started this month will continue in the days ahead."

Baraka, 76, told of how he first met King, a moment immortalized in a photographer's snapshot. For many years the photograph – of a surprised young black activist greeting King at his front door – hung in the Newark, N.J., city chambers, the city where Baraka was born and still resides. The youngster was Baraka, whose given name was LeRoi Jones (until he changed it not long after this meeting). King had just finished a march in Newark and stopped by to meet this man he had heard of.

He looked tired and was dressed casually, Baraka said.

A week later he was shot dead in Memphis.

The photo was taken down, an office worker told him, some time after Baraka wrote a poem about Sept. 11 that was critical of white, corporate America. Baraka was asked to give up his post as poet laureate of New Jersey or apologize for the poem, but he refused to do either.

He read "Somebody Blew Up America," while periodically drumming on the podium and interjecting a jazzy tune.

"... Who make the credit cards
Who get the biggest tax cut
Who walked out of the Conference
Against Racism
Who killed Malcolm, Kennedy & his Brother
Who killed Dr. King, Who would want such a thing?"

Baraka said he didn't agree with King's nonviolent tactics at the time of the civil rights leader's unexpected visit in the early 1960s, but has come to appreciate him more in his adult years. King had to fight for basic civil rights for black Southerners. In the North, the struggle was more about opportunities for self-determination, Baraka said. Many of the young activists agreed more with Malcolm X – that you treat people the way they treated you, he said.

He and his comrades never lost their love and respect for King, even when they disagreed with him, Baraka said.

African-Americans need to show a united front these days, he said, an objective he has worked on for many years. He said people should come together to work on the problems that have persisted under the legacy of slavery and intensified in the recent right-wing backlash since the election of the nation's first black president.

He used Texas as an example, where the State Board of Education considered last year whether or not to remove the word "slavery" from textbooks. (The board ultimately voted to modify use of the term, with some conservatives lobbying to replace it altogether with "Atlantic triangular trade." The term was finally changed to the "trans-Atlantic slave trade.")

"The resistance to Obama is connected to the same racism from the past," Baraka said. "Although we have made progress and continue to fight the struggle, we still have a ways to go, and we will be opposed," he said, urging college students to take their education seriously.

He encouraged them to continue King's work on economic injustice and civil rights and be prepared to challenge "Obama's enemies."

"What do you think your parents sent you to college for?" he said. "Get the information and skills you need. It's your turn to help."

Baraka is the author of more than 40 books of essays, poems, drama, and music history and criticism. His reputation as a playwright was established with the 1964 production of "Dutchman," which won an Obie Award for best off-Broadway play and was made into a film. His other awards and honors include the American Academy of Arts & Letters award, the James Weldon Johnson Medal for contributions to the arts and National Endowment for the Arts grants.

Baraka and his wife, Amina Baraka, head up the word-music ensemble, "Blue Ark: The Word Ship," and co-direct "Kimako's Blues People," the art space housed in their theater basement for some 15 years.

Arthur Romano, a Rotary International World Peace Scholar who gave a Jan. 24 presentation on King and nonviolence in the auditorium of the Mary and David Harrison Institute for American History, Literature, and Culture and the Albert and Shirley Small Special Collections Library, said communicating and making connections despite differences are keys to building community. He encouraged the audience to stretch beyond the comfort zone, as King did when he worked with everyone from sanitation workers to presidents.

"If we don't exercise communication across differences, the skills atrophy," Romano said. He added to the idea of people having a "comfort zone," saying we each have a stretch zone and a panic zone. It's helpful in building community, he said, to recognize the stretch zone, where a person can learn new cultural meanings and contexts.

He distributed a handout with King's principles and steps of nonviolence as a guide to King's philosophy and as a road map for social change. The first principle says, "Nonviolence is a way of life for courageous people."

The end result is redemption and reconciliation, he said.

Another talk related to King and his time will be held on Feb. 22: Julian Bond and retired magazine reporter and public activist Arlie Schard will give a presentation on "The Civil Rights Movement and the Media" at 5:30 p.m. in the auditorium of the Mary and David Harrison Institute for American History, Literature and Culture and the Albert and Shirley Small Special Collections Library.