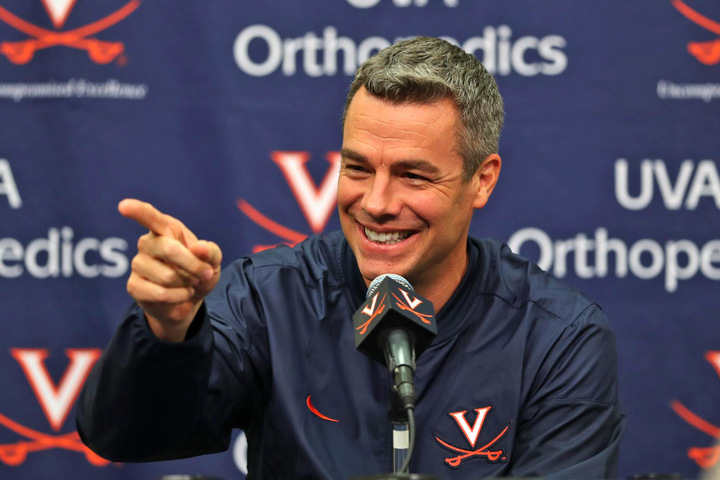 Head coach Tony Bennett has led the Cavaliers’ steady ascent in the college basketball world. UVA is ranked No. 7 in the country headed into the new season, which opens Nov. 11. (Photo by Matt Riley, UVA Athletics)

As a freshman in 2013-14, point guard London Perrantes helped the University of Virginia men’s basketball team win the Atlantic Coast Conference tournament for the first time since 1976.

“We’re not starting from scratch every year,” Perrantes said Wednesday at ACC Operation Basketball, a media event to build hype for the upcoming season. UVA’s first game is Nov. 11 at the University of North Carolina-Greensboro.

“When I got here, we were trying to find a way to win, to be a top team in the conference. Once we found that way, I feel like we’ve just been reloading ever since, he said.”

From a team that advanced to the NCAA tournament’s Elite Eight last season, Virginia returns only one player who averaged more than 4.6 points per game in 2015-16: Perrantes (11.0). Yet in the USA Today coaches’ preseason poll released last week, the Wahoos are ranked No. 7, and in the ACC media poll released yesterday, they were picked to finish third in a deep, powerful conference.

“That’s just how it works,” head coach Tony Bennett said. “That ranking is based obviously on the success that the last three years have brought, and there’s some pieces, but it’s preseason stuff. ... That’s just a compliment and a nod, a tip of the hat, to what went on before.”

Like Bennett, Virginia’s players don’t put much stock in preseason polls. Still, they recognize that such a lofty ranking reflects the program’s rise to national prominence.

“I feel like it’s a credit to Coach Bennett and what he’s done so far,” said junior forward Isaiah Wilkins, UVA’s other player representative at the ACC’s preseason media gathering.

Bennett is heading into his eighth season at Virginia, where his record is 165-72, with four trips to the NCAA tournament and one appearance in the NIT. His record over the past five seasons is 134-41, and the ’Hoos have captured two ACC regular-season titles during that span.

Early in his UVA tenure, when his program was fighting for respect, Bennett had no trouble instilling an underdog mentality in his players. Nobody underestimates the Cavaliers these days, but their culture remains constant.

“Our older guys have made sure that it stays that way,” Wilkins said.

As a new season approaches, the responsibilities of such players as Perrantes, Wilkins, redshirt juniors Devon Hall and Darius Thompson, and junior Marial Shayok have grown.

The veterans have to “make sure [the team doesn’t] lose our way, because if we do, I feel like we’re going to struggle,” Wilkins said. “If we buy into what Coach Bennett has taught us, I think we’ll be all right.”

Bennett said he’s not worried about his players losing their blue-collar mentality.

“Not in a league like this,” he said, “because quite honestly, if you don’t have it, it’ll show up quickly, and then you’ll have to get back to it real quick.”

At the heart of UVA’s success has been an unwavering commitment to rugged man-to-man defense, and his players know, Bennett said, that they “have to have that fighter’s mentality. We’ll never change that. That’s just our way. ... We’re getting some talented guys, but that will never change, or we’ll never even come close to touching what we need to touch.”

“I don’t know if they have that chip on their shoulder,” Perrantes said of the newcomers. “They haven’t been through what we’ve been through. [So it’s important] to instill it into them and tell them, ‘This is how we’re going to play, and you’ve got to play this way in order for us to be successful.’”

Perrantes is the Cavaliers’ only scholarship senior in terms of eligibility, but it’s not accurate to describe this as a young team. Hall, Thompson and Nichols, a transfer from Memphis, are each in their fourth year of college. Hall, in fact, is already in graduate school.

Wilkins started 21 games last season, and Shayok was in the rotation too.

“So you hope that experience is enough,” Bennett said.

Many of his upperclassmen are not as “battle-tested” as some who preceded them, Bennett said, “but it’s also an opportunity for those guys.”

The team’s unquestioned leader is the 6-2 Perrantes, who was named to the preseason All-ACC first team Wednesday.

“If you’re going to have one senior, that’s a good one to have, without a doubt,” Bennett said.

Overlooked by virtually every school in the Pac-12, Perrantes left his native Los Angeles and crossed the country in 2013, joining a UVA program that had reached the NIT quarterfinals the previous season.

“It feels like yesterday I just packed my bags and got to Charlottesville, Virginia,” Perrantes said. “It went by fast, and I’m excited for this last year.”

The ACC’s reputation added to Virginia’s appeal for Perrantes. He wanted to face elite competition and play in high-profile games for a program on the rise.

The ’Hoos have been especially formidable at John Paul Jones Arena, where they’ve won 45 of their past 48 games. The Cavaliers were 15-0 at JPJ last season, the first time since 1981-82 they’d finished with an unbeaten record at home.

The 6-7 Wilkins, who followed Brogdon from Greater Atlanta Christian to UVA, was happy to talk Wednesday about his leaner physique. He weighed about 185 pounds when he enrolled at Virginia in June 2014. By last season, he’d bulked up to 240, and “it was difficult to jump,” Wilkins said.

Moreover, the extra weight hurt his knees. “So I dropped some weight over the summer, and I feel fresh,” said Wilkins, who’s around 225. “My knees feel good, and I feel like I can jump and be wiry and be active.”

In the team’s Blue-White scrimmage Sunday at JPJ, Wilkins contributed 12 points, six rebounds and four assists. As a sophomore, in a frontcourt led offensively by Gill and Tobey, Wilkins was a not a consistent threat to score, and he averaged a modest 4.6 points per game.

Virginia needs more from Wilkins this season, and he knows it.

“With A.G. and Mike leaving, we lose a lot of our inside scoring,” Wilkins said. “So I definitely have to look to be more aggressive inside. I definitely took a step that way in the Blue-White game, to score the ball more.

“I think I have the ability to do it. It’s just making sure that it’s at the right times, and we’ll go from there.”