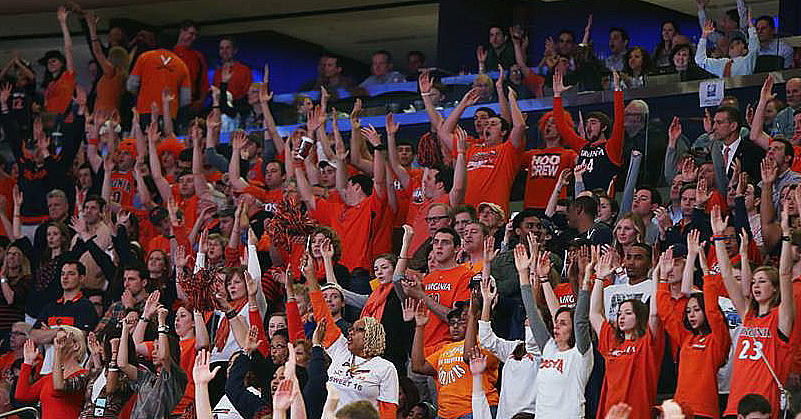 When Joe Harris, Akil Mitchell and Thomas Rogers walk the University of Virginia’s Lawn on Sunday, they will carry with them a distinction that no one at U.Va. has ever had: they will be able to call themselves Atlantic Coast Conference men’s basketball regular-season and tournament champions.

The Cavaliers’ magical season, which arced all the way into the top five of the national rankings before it came to a crushing end at the hands of Michigan State in the “Sweet 16” round of the NCAA Tournament, captivated the entire University community. The games at John Paul Jones Arena were cauldrons of fan enthusiasm, no more so than a 75-56 romp over formerly top-ranked Syracuse on March 1 that ended the home schedule and clinched the ACC regular-season title.

Once the postseason competition began, hundreds of Wahoo fans traveled to the ACC and NCAA Tournament games, while thousands more watched on TV – many at “watch parties” that sprang up all over town.

Harris and second-year Malcolm Brogdon were named All-ACC and Harris later was voted U.Va.’s top male athlete of the year. Head coach Tony Bennett was voted the ACC Coach of the Year.

The men’s basketball team’s run has been the highlight – so far – of what has been a very successful 2013-14 athletic year for Cavalier teams.

The precursor to the men’s basketball mania was women’s soccer fever. Led by Morgan Brian, who won the Hermann Trophy as the nation’s top player (and later was voted U.Va.’s top female athlete of the year), the Cavaliers swept through the regular season undefeated and untied – the first team to do so since Stanford in 2009 – and drew record crowds to Klockner Stadium. Soccer aficionados hailed the No. 1-ranked team’s stylish play as being revolutionary for the women’s sport.

The Cavs finally stumbled in the ACC Tournament, losing their first match of the season to Virginia Tech, but still claimed the top seed in the NCAA Tournament. They won their first four games there by a combined score of 10-1 to advance to the College Cup, soccer’s version of the Final Four, played in Cary, North Carolina.

Virginia led UCLA, 1-0, with just six minutes left in the semifinal game, but the Bruins rallied for a game-tying goal. After two scoreless overtimes, UCLA prevailed in the penalty-kick tiebreaker, ending the Cavaliers’ run. With the final result officially recorded as a draw, the Cavaliers finished 24-1-1.

Playing in the women’s long shadow was the U.Va. men’s soccer team. With an extremely young roster, the Cavaliers lost four of their first five matches just as the women’s team was turning heads.

But the young team got its feet underneath it and started to play better, reaching the championship game of the ACC Tournament before losing to Maryland, 1-0, after inadvertently scoring on its own goal. With a quite respectable 10-5-5 record, the ’Hoos earned an NCAA Tournament bid and a No. 8 seed, then defeated St. John’s, Marquette and Connecticut to reach the men’s College Cup, played in Chester, Pennsylvania.

Like the women’s team, though, the Cavalier men could not get past the semifinal round, falling again to Maryland, 2-1. Virginia started just one fourth-year player in that match, leaving head coach George Gelnovatch eager for a new season and a shot at the program’s seventh NCAA championship.

“I didn’t really think about this until after the College Cup,” he told Jeff White of VirginiaSports.com. “But this is the first time that I feel like we have a realistic chance to go back to back” to the College Cup.

The other fall sport to reach the NCAAs was the field hockey team, which earned its 19th bid. The ACC is far and away the nation’s top field hockey conference, with all seven of its teams qualifying for the 19-team NCAA field and three reaching the national semifinals.

Alas, Virginia was not one of the three. Tenth-ranked Massachusetts cut short the No. 7 Cavaliers’ NCAA stay, knocking off the ’Hoos, 4-3, in a first-round game in Charlottesville. U.Va. finished the season 15-6.

Moving to the winter, the Cavalier women’s swimming and diving team won its record seventh consecutive ACC championship, and its first under new head coach Augie Busch, who replaced the legendary Mark Bernardino in the offseason. Virginia went on to finish 11th in the NCAA championship meet, its highest finish since the 2010 team placed ninth.

Busch won ACC Coach of the Year honors, while first-year long-distance freestyler Leah Smith was named the ACC Women’s Freshman of the Year. Smith won three events at the ACC Championships and placed second in another, and earned All-America honors by placing third in the 1,650-meter freestyle and being part of Virginia’s fifth-place team in the 800-meter free relay at the NCAA championships.

The Cavalier wrestling team continued its ascent under head coach Steve Garland. U.Va. finished the season 18-3 and ranked 12th in the nation, defeating then-eighth-ranked Virginia Tech for what Garland called “the biggest win in program history.” They also downed two nationally ranked teams to win the Virginia Duals for the first time, and placed in the top 25 in the NCAA championships for the fourth time in the past five years. Nick Sultzer took fourth place at 165 pounds in the NCAA meet, becoming the program’s second multiple-time All-American.

Despite the successes of its fall and winter sports teams, Cavalier athletics may have been saving the best for last. Six U.Va. teams (both men’s and women’s teams in lacrosse, tennis and golf) qualified for NCAA play; a seventh, the baseball team, has spent much of the ongoing regular season ranked at or near the top of the national polls; and an eighth, the women’s rowing squad – which has placed in the top six nationally for the past seven years – is expected to contend for its third NCAA title.

Strong showings in the postseason should boost U.Va. in the Learfield Sports Directors Cup, an all-sports competition that awards points based on teams’ performances in NCAA championship events. Virginia ranked No. 15 nationally after the winter sports season.

Both the Cavalier men’s and women’s tennis teams rolled through the first two rounds of the NCAA tournament, which they hosted over the weekend, and will travel to Athens, Georgia for the round of 16. The fourth-seeded men’s team, led by Alex Domijan, the sixth-ranked singles player in the country, will face 13th-seeded Notre Dame on Friday in its attempt to defend its 2013 NCAA championship. The third-seeded women’s team, led by Julia Elbaba, the fourth-ranked women’s player in the country, will face No. 14 seed Baylor on Thursday. The Cavalier women captured their first ACC championship this spring.

The men’s golf team begins NCAA play Thursday as the second seed among 14 teams competing in the regional championship site in Columbia, Missouri, at The Club at Old Hawthorne. The women’s golf team, meanwhile, placed sixth in the NCAA East Regional over the weekend to qualify for the NCAA national championship, to be held May 20-23 at the Tulsa Country Club in Tulsa, Oklahoma.

The results were split in lacrosse, where both the men’s and women’s teams hosted NCAA games on Sunday. The sixth-seeded Cavalier women knocked off Princeton, 13-11, and will face third-seeded North Carolina on Saturday in a quarterfinal game in Chapel Hill. But the eighth-seeded U.Va. men were unable to overcome an early deficit against Johns Hopkins and lost, 14-8, ending their season.

The top-ranked Virginia baseball team is scheduled to finish regular-season play on Saturday against Wake Forest. After the ACC championships May 21-25, the Cavaliers are regarded as near-locks to receive one of eight national seeds in the NCAA tournament, meaning they would likely host the NCAA regional and, if still alive, super regional rounds at Davenport Field.

Finally, the women’s rowing team was set to travel to Clemson for the ACC championships, to be held Friday and Saturday. After that, the Cavaliers were likely to be invited to the 22-team NCAA meet, to be held May 30 and June 1 in Indianapolis. They will be gunning for their third national championship in five years.

Though not all U.Va. teams turned in championship performances, many individual athletes received recognition for outstanding efforts.

A Year We Will Never Forget: 2019-20 in Review END_OF_DOCUMENT_TOKEN_TO_BE_REPLACED

‘What Will You Carry With You?’ Remarks From UVA President Jim Ryan END_OF_DOCUMENT_TOKEN_TO_BE_REPLACED