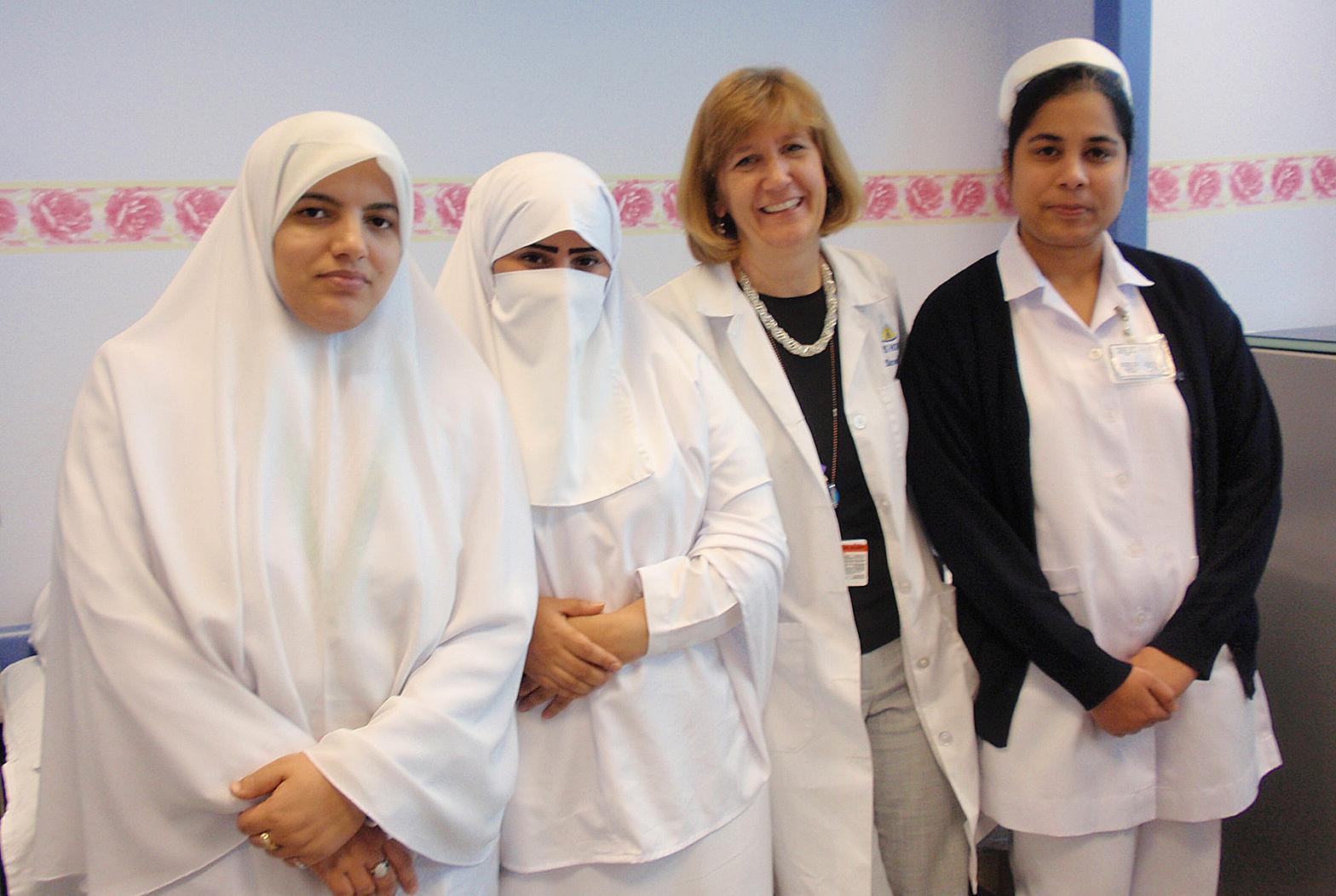 Susan Renda is a close talker.

Unlike many Westerners who require an 18-inch bubble of personal space, Renda, who is in the Doctor of Nursing Practice program at the University of Virginia’s School of Nursing, holds hands with patients during appointments and usually offers a greeting and departure hug and kiss. It’s one of the reasons she fits into Kuwaiti life so well.

Here’s another: Renda, with nearly 25 years of experience as a nurse practitioner and professor since earning her undergraduate nursing degree from U.Va. in 1980, is a seasoned diabetes educator. And Kuwait – where roughly 24 percent of the population suffers from type-2 diabetes – ranks third in the world in terms of incidence of the disease.

When most people think of diabetes, Renda said, they conjure an image of an overweight American grown plump on fast and processed food. But in fact, it’s the Middle East that’s borne an increasingly dramatic burden of the disease. Five of the nine countries where diabetes is most common lie in the Middle East, with Kuwait ranking third overall, according to the BBC.

Some of that has to do with the wealth created by oil, Renda said, and some of it has to do with an overabundance of poor nutritional choices, a sedentary lifestyle, and the fact that fresh fruits and vegetables must be imported, due to an agriculturally inhospitable climate.

“Every country has a big problem with diabetes – it’s not just the U.S. at the top,” she said. But in Kuwait, a real knowledge deficit exists for patients in terms of diabetes and diabetes self-management, she said, adding, “So the question becomes: Can nurses be trained to deliver diabetes education?”

Given the health and financial burden of accommodating a growing population of diabetics, Renda, along with colleagues at U.Va.’s School of Nursing, Johns Hopkins Hospital and Kuwait’s Ministry of Health, aim to battle the disease at its source: by educating diabetics through simple-to-use materials – brochures on foot care and understanding the deadly onset of diabetic ketoacidocis, for example – and creating diabetes education and certificate programs for the Kuwaiti nurses and physicians who tend these patients.

Arriving in Kuwait City in early December, Renda found herself stepping back in time – “It’s like nursing in the 1940s,” she said – when she arrived in the geographically diminutive but fiercely proud Middle Eastern country, which still bears scars from its 20-years-ago invasion by neighboring Iraq. Impressed in equal parts by the people’s warmth, Kuwaiti nurses’ capacity and their eagerness to learn, Renda is now making plans for a series of materials and curriculum about diabetes intended for both Kuwaiti patients and their caregivers. The work – which will ultimately be her doctoral capstone project at U.Va. – will better position the country’s hospitals to face the disease head-on.

“I knew I wanted to go into nursing because I’m interested in prevention, and I thought nursing was in a better situation to handle that,” said Renda, who lives in Baltimore and commutes to Charlottesville for class once a month. “It’s the more holistic approach.”

For now, Renda is developing modules for the Kuwaiti nursing staff to use, establishing a process for them to pre-assess and post-assess patients’ knowledge about diabetes and the requirements for self-care, and creating appropriately simple, picture-oriented brochures written in Arabic.

Prep work for the trip, primers on Middle Eastern culture and the project itself was both fascinating and well-suited, Renda said. Her U.Va. coursework offered valuable perspective as well.

“The DNP ‘Essentials of Collaboration’ course and [professor] Ishan Williams’ culture class have given me the tools to examine the literature, to look at its theoretical application and to frame what we’re doing in Kuwait,” she said. “The DNP is helping me stand on my own two feet and feel confident.”

Renda’s route back to school, after a lengthy professional career in nursing, teaching and diabetes education, was stirred by her 30th reunion at U.Va. There she met a former classmate who’d earned her doctoral degree.

“Do I want to get a different view on nursing?” Renda recalled asking herself. “But once I heard about the executive style of the DNP program, knew I could attend part-time and the fact that there was no time barrier – I was ready.”

Another bright spot is that she and daughter Emily, a sociology major in U.Va.’s College of Arts & Sciences, will likely walk the Lawn together during 2014 Final Exercises.

Until her planned return to Kuwait next spring, Renda will remain in close contact with the Kuwaiti nurses via email, working to develop materials and classes and readying herself to deliver them.

“I’m hoping to impact patients, yes, but also looking at developing change and capacity in the nurses there,” she said. “Our ultimate goal is that we help, but we listen, and do it on their terms. We’re not just going in and saying, ‘Do it this way,’ but being there, doing things with them, seeing how they do things.”