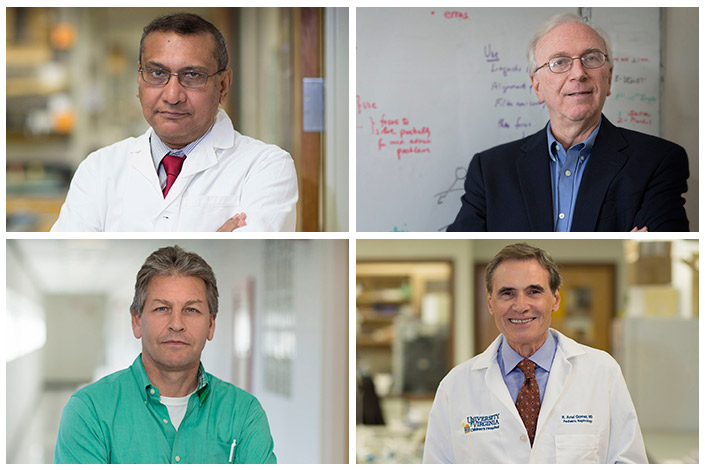 The award, created by the Office of the Vice President for Research, honors longtime faculty members who have made extensive and influential contributions in the sciences, medicine or engineering.

The recipients will be honored at a dinner reception at the Colonnade Club.

“They have produced truly new ideas and understandings in their respective fields – neuronal signaling and ion channel physiology; DNA replication and microDNA; pediatric nephrology and renin biology; real-time computing, wireless sensor networks, cyber-physical systems, and wireless health,” he said. “They each have distinguished themselves, both at U.Va. and in their international research communities, and have had significant impact throughout their research careers with respect to scientific discovery and societal good.”

U.Va. faculty members and department chairs annually nominate senior faculty in the sciences for the awards, and a panel of faculty peers judge the nominees based on publications, awards and comments from peers outside the University regarding the quality of the research and its importance to society.

Winners are chosen for distinguishing U.Va. through a large body of work conducted over a lengthy period of time at the University. They each receive a $10,000 grant to enhance their research activities.

Douglas A. Bayliss, Joseph & Frances Larner Professor and Chair, Department of Pharmacology, and Professor of Anesthesiology

Bayliss, who holds a doctorate in physiology from the University of North Carolina, joined U.Va. in 1994. He has served as a professor of pharmacology (with a joint appointment in anesthesiology) in the School of Medicine since 2006, and as chair of pharmacology since 2008. He recently served as co-chair of a committee designing the school’s strategic plan for the basic sciences.

Bayliss is widely regarded as a leading figure in ion-channel physiology. Ion channels are gateways in cell membranes that, when malfunctioning, are associated with several diseases. Bayliss focuses on neuronal signaling, attempting to define the molecular basis for neuronal ion channels and the cellular mechanisms modulating their activity.

He studies how ion channels determine intrinsic excitability of brain cells, as they often are subject to regulation by endogenous neurochemicals and can influence responsiveness to many drugs, therapeutic and otherwise. His work has yielded new insights into chemical control of respiration, hormonal regulation of blood pressure and anesthetic actions on behavioral states.

“Doug is a very special individual,” said Kodi Ravichandran, a professor of microbiology, who nominated Bayliss for the honor. “He is creative, very thoughtful and careful, a supreme collaborator, and a fantastic mentor to his junior colleagues. He is highly respected in his field, beloved by his colleagues, students and postdocs for his honesty, integrity and scientific excellence.

“His ability to give feedback in a positive way in seminars and meetings, yet not compromise the quality of the science or the interrogation of the data, is something we can all learn from. His service to the department, the School of Medicine and the University are remarkable – Doug has taken on many tasks for the school and the University and has consistently done well, both in maintaining quality, but reaching meaningful consensus in discussions through his leadership and inter-personal skills. In my opinion, this combination of qualities is what makes him a Distinguished Scientist.”

After receiving his medical degree in 1981 from Christian Medical College, Vellore, one of the foremost medical schools in India, Dutta pursued his Ph.D. in viral oncology at the Rockefeller University in New York. He came to the U.Va. School of Medicine as the Harry F. Byrd Professor of Biochemistry in 2003 and became the director of Functional Genomics in the U.Va. Mellon Prostate Cancer Research Institute. He serves as co-leader of the Genetics and Epigenetics Program of the U.Va. Cancer Center.

Dutta investigates the key regulatory proteins that initiate replication of chromosomes, as well as factors that prevent cells from over-replicating their DNA. His discoveries have led to a new compound under development that can kill cancer cells by forcing them to over-replicate their DNA. Additional work from his laboratory has shown how microRNAs push cells to differentiate or to turn into cancers, and how a human papilloma virus oncogene can subvert a cell’s response to DNA damage.

“Anindya is an outstanding scientist in every sense of the word – highly innovative, incisive in asking the right questions and pursuing them vigorously, and finding the most interesting, beautiful and paradigm-shifting work,” said Ravichandran, Dutta’s nominator.

“When I was seeking letters for this nomination, I contacted three of his peers and all three of them responded within minutes of each other stating their willingness to write letters. Their letters reflect how much they value Anindya’s contributions to the field, how much his science has moved the thinking, and the overall quality and rigor of his work. As a person, his honest and sincere approach in search for excellence in his own work and those of others is greatly appreciated by his peers here at U.Va. and beyond.”

Dr. Ariel Gomez received his medical degree from the University of Buenos Aires, Argentina in 1975. He joined U.Va.’s Department of Pediatrics in 1984 where he has made fundamental contributions to the understanding of the origin, identity and fate of the kidney’s renin cells. Gomez has served the University as chief of pediatric nephrology, vice president for research and graduate studies, and founding director of the Child Health Research Center.

He is known for furthering the understanding of the biology of leukemia by charting the pedigrees of developing kidney cells to the malignant transformation of blood cells.

“As soon as Dr. Gomez arrived at U.Va. in 1984, he developed collaborations with faculty members throughout the basic sciences,” said Dr. Robert L. Chevalier, professor emeritus of pediatrics and Gomez’s nominator. “His international background led to numerous fruitful collaborations across the world, particularly in Europe and South America, and he developed a close collaboration with Nobel laureate Oliver Smithies at the University of North Carolina.”

Chevalier said Gomez has pursued a highly focused trail of inquiry by repeatedly asking – and answering – complex questions regarding a key regulatory system responsible for the maintenance of physiologic balance: the renin-angiotensin system, which regulates blood pressure and fluid balance.

“He used novel state-of-the-art molecular approaches to identify exactly how specialized kidney cells differentiate and transform in response to stimuli resulting in growth or response to stress,” Chevalier said. “He observed that when homeostasis is threatened, additional cells are recruited to maintain blood pressure and fluid/electrolyte balance.

This discovery pointed to a fundamental biological principle: under normal physiological circumstances the ability to reacquire expression of a homeostatic hormone is determined by the developmental history of a cell.

“Our academic community has been extraordinarily fortunate in recruiting and retaining him at the University of Virginia for three decades.”

After earning his Ph.D. from Brown University and serving on the faculty of the University of Massachusetts at Amherst, Stankovic came to U.Va. in 1997 as the BP America Professor and chair of the Department of Computer Science. He is an internationally renowned researcher and leader in four related, but distinct, areas: real-time computing, wireless sensor networks, cyber physical systems, and wireless health.

“I’m delighted that Jack Stankovic has been selected to receive the Distinguished Scientist Award in recognition of his outstanding record of achievement and impact during his career at U.Va.,” said Kevin Skadron, chair of the Department of Computer Science, and Stankovic’s nominator. “Jack is recognized specifically for his work in real-time computing, cyber-physical systems, and wireless health, as well as his service to the University and the nation. He is a leader in every way – as an internationally renowned research leader, as a leader for the field of computer science as a whole and as a thought leader here at U.Va. We are very lucky to have him as part of our community.”

Stankovic is one of the most highly cited computer science researchers in the world, with more than 38,000 citations to his work from other research papers. His research has received significant media coverage in such venues as The Economist, Computer World, New Scientist, the Discovery Channel Canada and the BBC. He has won seven Best Paper Awards and given 35 conference keynotes. Last month the University of York, U.K., awarded him an honorary doctorate for his influential research contributions.

“Jack played a huge role in continuing the shift of the computer science department to a highly ranked research department, while maintaining our excellence in providing cutting-edge computing degree programs,” Skadron said. “He also helped lead the creating of our computer engineering degree programs, together with the electrical and computer engineering department; and established the foundations of our interdisciplinary B.A. program in computer science, which is offered in conjunction with the College of Arts and Sciences.”

At UVA, There Is a Club for Everyone END_OF_DOCUMENT_TOKEN_TO_BE_REPLACED