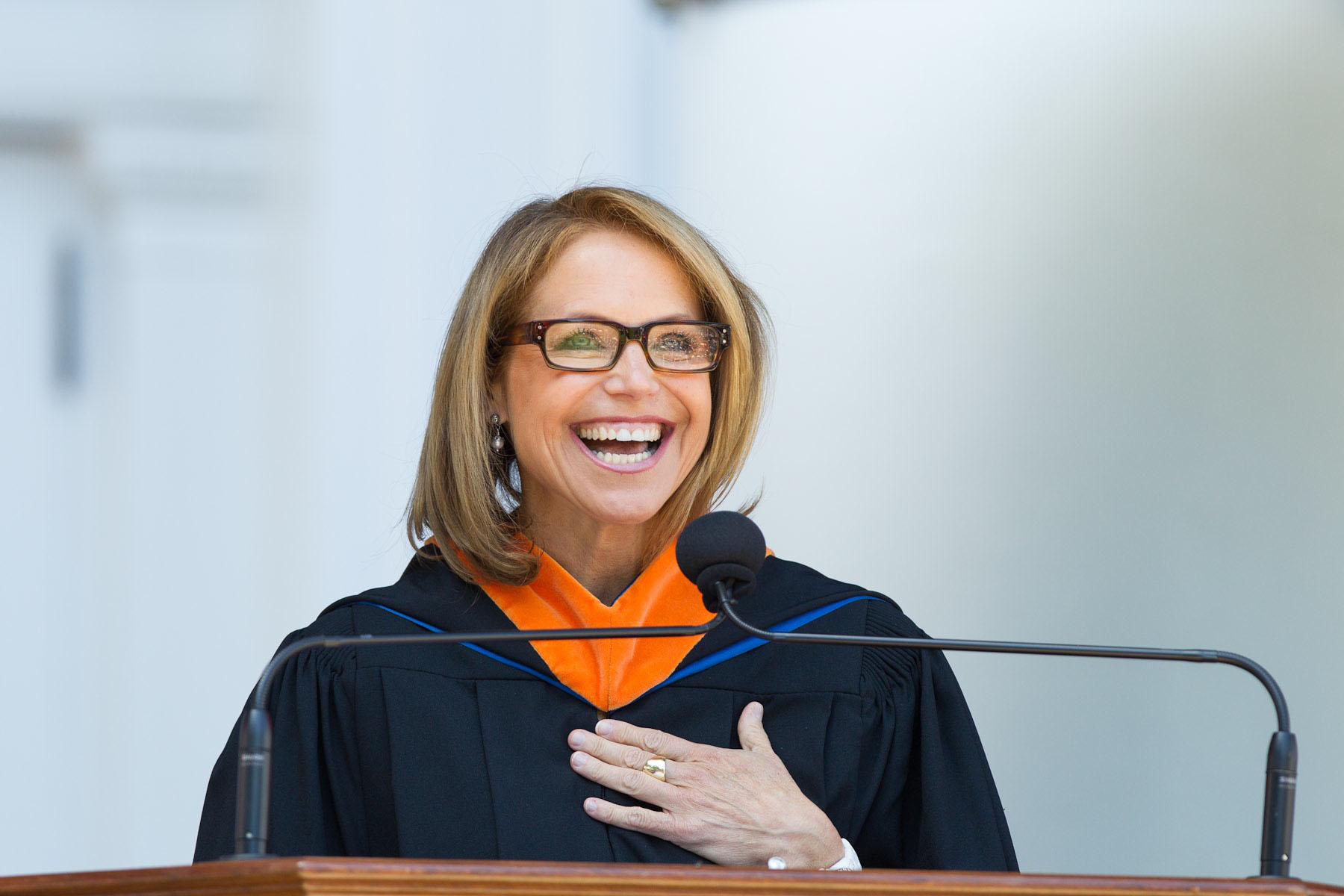 Katie Couric joked Sunday that it took 33 years for her alma mater to finally – finally! – invite her to speak at Final Exercises.

Then, at last, the call came last fall from University of Virginia President Teresa A. Sullivan. "I guess it took the first woman to lead the University in 193 years to get the job done," Couric quipped, drawing laughter and an extended cheer from the female graduates arrayed before her on the lower Lawn on a breezy and sun-kissed day.

"This is going to be heavy-duty feminist," Couric ad-libbed. "Sorry, guys." Noting that all of the day's major speakers were female, as was the keynote speaker at Saturday's Valedictory Exercises (1981 alumna Valerie Ackerman, former president of the Women's National Basketball Association), Couric said, "It's so refreshing that more than half of the country's population is being represented here today by a 100 percent female lineup!"

Indeed, it was a historic weekend for women in leadership roles at U.Va. In addition to Sullivan and Couric, the speakers included Helen Dragas, the first female rector of the University; Victoria Dux Harker, chair of the U.Va. Alumni Association Board of Managers; and grand marshal Gweneth L. West, a drama professor in the College of Arts & Sciences.

It wasn't until over an hour into the ceremony that a male voice was heard from the podium, when John D. Simon, executive vice president and provost, introduced Dr. Steven DeKosky, dean of the School of Medicine, to begin the conferral of degrees.

Couric's address highlighted the University's 183rd Final Exercises, which saw about 6,000 graduates take 6,411 degrees. An estimated crowd of 35,000 packed the Lawn – the first arriving well before sunrise to secure front-row seats for the 10 a.m. ceremony.

Despite Couric's joking apology to the males in audience, her 33-minute address had little to do with feminism, save for a jab at those who criticized her anchoring of the "CBS Evening News." ("Some said I lacked 'gravitas,' which I've since decided is Latin for 'testicles,'" she said, again drawing laughter and applause.)

Instead, she gave the boisterous-but-well-behaved graduates what amounted to a pep talk as they entered into a shaky economy, structuring her speech around her own set of "three R's": "risk, rejection and resilience."

With humor, personal anecdotes and pop culture references, she urged the Class of 2012 to take chances, work hard, learn from failure, and most of all, to remain grounded. Recalling the deathbed advice of her late husband, Jay Monahan, that "Nothing really matters except your friends and family," Couric said, "It is the people in your lives and the love you share that will truly be the measure of your success."

In what she called "the tough love portion of the program," Couric noted that some in higher education have described the current generation of students as "teacups" – fragile and overprotected.

"They say you've been over-coddled, over-parented," she said, admitting that as the parent of two teens, she shares the generational guilt. "You haven't learned to deal with disappointment or setbacks, or rejection, because you haven't really had to. After all, everyone made the soccer team and everybody got a trophy, right?

"Don't be a teacup," she urged. "Be a travel mug – sturdy and ultimately unbreakable."

Couric paid special tribute to a member of the class, Lynette Jones, a double-major in English and African-American studies in the College who "is in the fight of her life," battling an aggressive cancer.

"Despite the pain, fatigue and fear that come with her diagnosis, Lynette has been powering through, writing papers from her hospital bed and focusing on the future," Couric said. "She told me she would try her hardest to come to her graduation. And she's here!"

As the throng cheered and applauded, Couric said, "Lynette, you are my new profile in courage. If you're not an example of resilience, I don't know what is."

In her remarks, Sullivan recognized several graduates with family connections, including a mother and daughter in the School of Continuing and Professional Studies' Bachelor of Interdisciplinary Studies program; a father and daughter who were earning degrees from the School of Engineering and Applied Science and the College, respectively; and a father, Skip Castro Band drummer Corky Schoonover, who also earned a BIS, and son, Patrick, who graduated from the School of Architecture.

Noting that University founder Thomas Jefferson was "a family man," Sullivan said, "In a 1789 letter to his younger brother Randolph, Thomas Jefferson wrote, 'No society is so precious as that of one's own family.' I imagine that Mr. Jefferson would be delighted to know about these family members who have pursued learning side by side at the University that he founded."

After spotlighting some of the Class of 2012's accomplished members, Sullivan said, "Thomas Jefferson wanted this University to be 'based on the illimitable freedom of the human mind' so that students here would be free, in his words, 'to explore and to expose every subject susceptible of its contemplation.' As you can tell from these stories, our students have upheld Jefferson's intention by exploring the boundless possibilities of learning.

"They and their classmates in the Class of 2012 are now well-prepared to provide vision and leadership at every level of the careers and communities they will enter as they leave this place."

"Leaving this place" was a bit chaotic in the minutes after the main ceremony concluded, as graduates scrambled to reconnect with their families and hustle to their respective diploma ceremonies, some of which were scheduled to begin just minutes later. Nonetheless, as they had been all day long, the crowds were polite and good-humored.

Even at 7 a.m., surprisingly fresh-faced graduates-to-be, some already wearing their robes, crossed paths with packs of morning joggers as they made their way to Central Grounds. On the Lawn, proud parents snapped the obligatory graduate- in-front-of-Rotunda pictures. By two hours before the ceremony, all of the seats along the route of the academic procession were filled; later risers took the consolation prize of seats in the shade.

The procession, accompanied by the 392nd Army Band from Fort Lee, lasted more than an hour. Graduates strove to outdo each other in decorating their mortarboards; perhaps the most impressive headgear was a replica of the house from the animated movie "Up," complete with a large bouquet of colorful balloons. Few of the other graduates' balloons made it through the ceremony, either taking flight into the sparkling blue skies or meeting an untimely demise.

By mid-afternoon, as the last diplomas were handed out, the crowds thinned to a scattering few, and the University's 193rd academic session drew to a close.