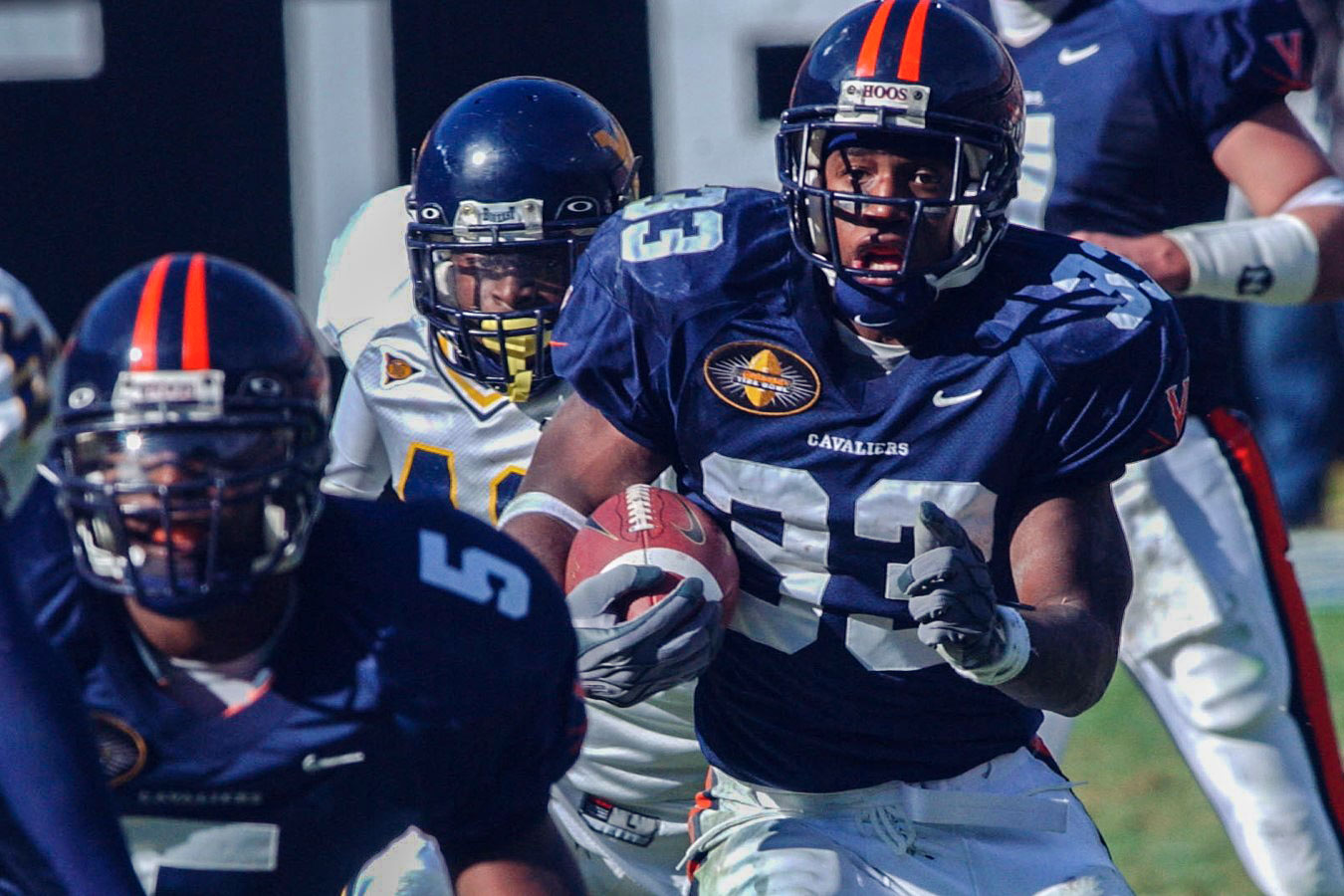 Editor’s note: The University of Virginia athletics department announced on Wednesday that it has partnered with the Boys and Girls Club of Greater Charlotte to create opportunities for Cavalier fans to help members of the Boys and Girls Club and their families to attend the 2018 Belk Bowl. Find more information and a link to register here.

Nothing against the Queen City, but at the end of the 2002 regular season the University of Virginia football team’s preferred postseason destination was not, in all honesty, Charlotte, North Carolina.

In tying for second place in the ACC, UVA (6-2 conference record) had defeated such teams as Maryland (6-2), North Carolina State (5-3) and Clemson (4-4). The Cavaliers, who were in their second season under head coach Al Groh, believed they’d earned an invitation to their bowl of choice, the Peach Bowl in Atlanta.

But the Peach picked Maryland, which UVA had routed 48-13, and the Gator Bowl, in Jacksonville, Florida, selected N.C. State. With that news, the Wahoos thought they might be headed to another Florida city, Orlando, but the Tangerine Bowl chose Clemson.

And so Virginia ended up in a new postseason game – the Continental Tire Bowl in Charlotte – a turn of events that did not cause a celebration to break out at the McCue Center.

“We felt we were maybe deserving a little better bowl game than that,” quarterback Matt Schaub recalled this week.

Those feelings soon faded, though, and the Cavaliers’ disappointment turned to delight in Charlotte.

In the inaugural Tire Bowl, in front of a sellout crowd of 73,535, Virginia hammered 15th-ranked West Virginia 48-22 at what was then called Ericsson Stadium, home of the NFL’s Carolina Panthers. (It’s now Bank of America Stadium.)

A year later, the ’Hoos returned to Charlotte and won the second Tire Bowl, defeating Pittsburgh, then a member of the Big East, 23-16. Both games were played under sunny skies and in moderate temperatures.

“I just remember how fun they were,” Marques Hagans said of those postseason trips, during which the Cavaliers visited the local NASCAR track, now called Charlotte Motor Speedway, for several activities ahead of the bowl game.

“Growing up, I had never really cared much for car racing, but when we got a chance to ride in the car, it changed my whole perspective,” Hagans said, laughing. “I didn’t realize the turns were that steep.”

Hagans later succeeded Schaub as Virginia’s starting quarterback, but in 2002 and ’03 he played wide receiver and returned punts. Hagans is now an assistant coach with the Cavaliers, who are headed back to Charlotte for the first time in 15 years.

On Dec. 29, UVA (7-5) will meet South Carolina (7-5) at noon in the Belk Bowl at Bank of America Stadium. The title sponsors of the game and the venue have changed, but for the ’Hoos, happy memories of their 2002 and ’03 visits to Charlotte remain.

For many players on the 2002 team, the inaugural Tire Bowl was their first postseason experience. Virginia had finished 5-7 in 2001 and thus did not qualify for a bowl game.

“I think a lot of people wanted to prove how good we really were, and that’s what we did,” recalled Patrick Estes, a sophomore tight end in 2002.

The Mountaineers, the Big East’s second-place team that season, came in with a 9-3 record and no shortage of bravado.

“I just remember the whole week it was like West Virginia was planning a win,” recalled Connor Hughes, who as a true freshman had taken over the Cavaliers’ kicking duties late in the 2002 season. “They were just acting crazy all week, like they were going to kill us.”

UVA cornerback Almondo Curry, a junior in 2002, said this week that the Mountaineers “were throwing little shots here and there the whole week. There was just some built-up energy inside of us that we had to release that day.”

Hagans said: “That was a really good team that we played. That was a huge challenge for us, and [Groh] framed it the whole week like, ‘This is a tough team, but so are we.’”

It was customary for UVA’s players to run out of the tunnel and onto the field before a game. For the first Tire Bowl, however, Curry, who’d played with Hagans at Hampton High School, suggested a change that the team adopted.

“We walked out in two single-file lines, holding hands,” Curry recalled. “We just walked through the middle of the field, and the crowd was going crazy.”

UVA fans turned out in force for the game, but WVU supporters outnumbered them in the stands. Ryan Sawyer, a junior wide receiver in 2002, said the Cavaliers were making a point with their entrance.

“I think that was a message delivered by the coaching staff and the captains of our team: it was us against the world,” Sawyer said.

After one quarter, the Mountaineers led, 10-7. But UVA outscored them 21-0 in the second quarter and continued rolling in the second half.

“Offensively, it seemed like anything we called was working,” said Schaub, the ACC Player of the Year in 2002. “Guys were making plays all over the field.”

On defense, linebacker Angelo Crowell led the ’Hoos with 12 tackles, and Curry and linebacker Darryl Blackstock each had an interception. On special teams, Hagans returned a punt 69 yards for a second-quarter touchdown. On offense, behind a line that consisted of two true freshmen, one redshirt freshman and two sophomores, the Cavaliers piled up 391 yards.

“We were playing complementary football,” said Schaub, who’s now with the Atlanta Falcons.

Against WVU, Schaub completed 16 of 22 passes for 182 yards and one touchdown, a 48-yarder to true freshman tailback Wali Lundy. The game’s MVP, Lundy produced many more highlights that afternoon.

He caught a 14-yard touchdown pass from Hagans on a trick play in the first quarter and finished with five receptions for 76 yards. Lundy also rushed 22 times for 127 yards and two TDs.

Tight end Heath Miller caught three passes for 54 yards. The Cavaliers’ top receiver, Billy McMullen, left the game after getting hurt on his first reception, but Sawyer filled in admirably for him, catching four passes for 41 yards.

Most of UVA’s standouts from 2002 were back the next year, and newcomers to the lineup included two five-star linebackers: true freshman Ahmad Brooks and redshirt freshman Kai Parham. The Cavaliers also had a new head strength coach in 2003: Evan Marcus.

“I just remember that roster being loaded,” said Marcus, now an assistant strength coach with the Cleveland Browns. “You had good players everywhere. There was just a grit and toughness to those kids.”

Even so, the ’Hoos dropped four of five games during one stretch and stood 5-5 after losing 27-17 to Maryland in College Park. But Virginia rebounded to win its final two regular-season games, defeating Georgia Tech (29-17) and Virginia Tech (35-21) and accepted an invitation to return to the Tire Bowl.

Waiting for UVA were Pitt and its All-America wide receiver, Larry Fitzgerald, who came to Charlotte having caught at least one touchdown pass in each of his previous 18 games. In the 2003 regular season, Fitzgerald had 87 catches for 1,595 yards and 22 touchdowns.

Hagans remembers watching Fitzgerald, whose NFL career has made him a lock for the Hall of Fame, warming up.

“I went out pregame to catch punts, and this dude was out there catching passes above his head with one hand,” Hagans said. “I was like, ‘This is not normal.’”

The UVA team that traveled to the Tire Bowl in 2002 included three players from Charlotte: Pearman, a versatile running back; Canty, a big, athletic defensive lineman; and Stan Norfleet, a reserve linebacker.

Of the three, only Norfleet played against West Virginia. Pearman had torn his ACL against Penn State on Nov. 9, 2002, and Canty had injured his elbow three weeks later against Virginia Tech.

During part of their 2002 stay in Charlotte, the ’Hoos practiced at Charlotte Country Day School, from which Pearman had graduated.

“It’s a bizarre, surreal kind of feeling,” Pearman recalled. “You have all these memories of practicing on a particular football field with your middle school and high school buddies, and then having an entirely new team sort of take up residence on that field for a couple days was just wild.”

Pearman remembers “being so deeply frustrated during the West Virginia game that I couldn’t contribute. I was ecstatic that we came away with the victory, but you just hate to be on the sideline. And adding insult to injury, literally, was the fact that I was in my hometown.”

For the second Tire Bowl, both Pearman and Canty were healthy – and motivated.

The Cavaliers totaled 440 yards on offense. Still, Schaub said, it “was hard for us to put together consistent drives.”

“The West Virginia game, I just remember feeling like the second half was a runaway,” Hughes said. “The Pitt game I remember thinking, ‘Every single point counts in this one. We can’t take anything for granted.’”

Hughes’ 39-yarder closed out the scoring with 2:28 left against Pitt. The Cavaliers forced a turnover on the Panthers’ next possession – defensive lineman Brennan Schmidt knocked the ball loose on a sack, and Parham recovered – and then ran out the clock.

“I don’t know if Connor gets enough credit,” Hagans said. “If Connor missed a field goal, it was like the world shifted. Just like how Heath always caught the ball, Connor always made the field goal.”

The biggest story in the second Tire Bowl, though, was the Cavaliers’ work against Fitzgerald. He finished with five receptions for 77 yards, but UVA kept Fitzgerald out of the end zone.

“We had that bend-but-don’t-break mentality,” Curry said. “He’s one heck of a player and a future Hall-of-Famer, but that day, our coaching staff and all of us, we just did a wonderful job.”

Virginia’s starters in the secondary that day were Curry and Tony Franklin at cornerback and Hardy and Winborne at safety. Elsewhere on the defense, Brooks finished with a game-high 12 stops, Parham had 10 and Canty made nine. In all, UVA had nine tackles for loss.

“If you’re a senior, you want to end your season in that kind of fashion,” Curry said.

The Cavaliers haven’t closed a season with a victory since 2005, when they defeated Minnesota in the Music City Bowl in Nashville.

Hughes and Pearman won’t be able to make it to Charlotte on the 29th – Hagans’ birthday, as chance would have it – and neither will Schaub, who has a game at Tampa Bay the next day. But Curry plans to attend the Belk Bowl, and Sawyer and Estes might be there, too.

Pearman is an assistant professor of urban education at Pittsburgh, of all places. He remains in contact with numerous former UVA teammates, including Hagans, and still closely follows his college program, which is in its third season under head coach Bronco Mendenhall.

“I think it’s an incredible thing for the University and alumni, in particular football alumni, when you’re having consistent success on a year-to-year basis,” Pearman said. “We have high hopes for the bowl game.”

Hagans played in four bowl games during his UVA career: two in Charlotte; one in Boise, Idaho; and one in Nashville. The Cavaliers won three of them, and their victories in Charlotte are games Hagans won’t ever forget.

“We made some really good memories and had some good times, but I’m also looking forward to a lot of the [current players] making their own memories,” Hagans said.