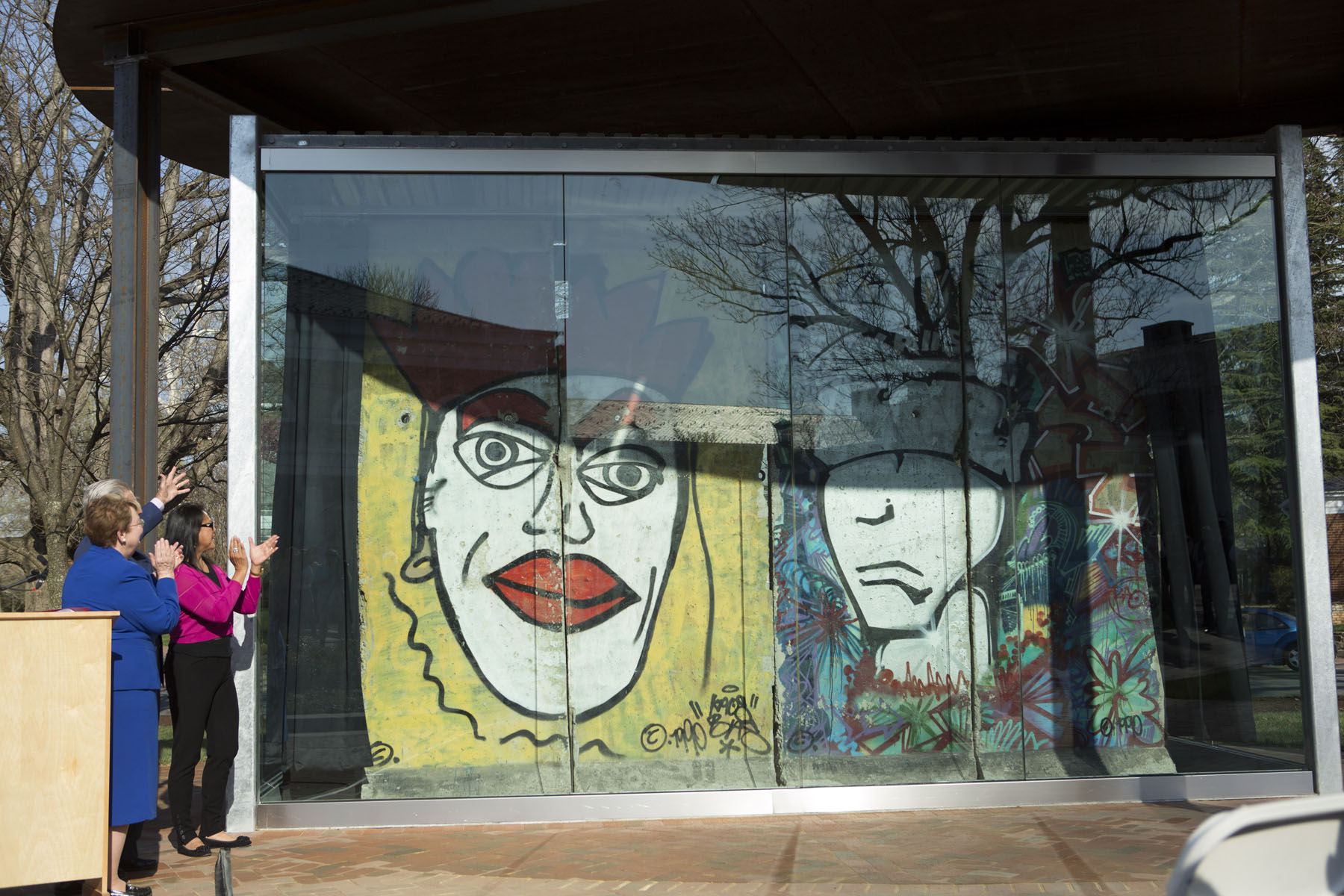 In 1820, Thomas Jefferson wrote to a friend, “The boisterous sea of liberty is never without a wave.” In 1989, just such a wave of boisterous liberty toppled the Berlin Wall.

Four panels of that historic wall are now on the Grounds of Jefferson’s University of Virginia in an art installation that reflects his principles of “unalienable rights” – life, liberty and the pursuit of happiness.

As the University and Charlottesville community celebrated Jefferson’s birthday on Friday, alumni, faculty, students and friends of the University gathered on the quad adjacent to Alderman Library and the Albert and Shirley Small Special Collections Library to view the formal unveiling of the “Kings of Freedom” mural by graffiti artist Dennis Kaun, painted on the west side of the Wall. (The four panels of the Berlin Wall were installed on the site last month.)

The unveiling included remarks by U.Va. President Teresa A. Sullivan; Robert Hefner, who, along with his wife, MeiLi, loaned the four panels on exhibition to the University; and Jody Kielbasa, U.Va.’s vice provost for the arts.

The event marked the opening of a yearlong U.Va. celebration of the 25th anniversary of the fall of the Berlin Wall, featuring extensive supporting academic and artistic programming.

“We have gathered to celebrate two occasions – one occurring today, with the unveiling of a remarkable piece of history and a powerful work of art; and one that occurred nearly 25 years ago, when a global symbol of oppression fell to the forces of freedom and free expression,” Sullivan said. “This Berlin Wall installation provides, literally, a concrete lesson about the course of human history, and it’s also a profound and remarkable work of art.”

“MeiLi and I have brought this loan to the University, but we also consider it a gift to our beloved Mr. Jefferson for his birthday weekend,” Hefner said. “It’s these pieces of the Berlin Wall, standing right here before us, torn down by the free will of the people of Berlin, that serve as full proof that the rights of liberty and freedom that Mr. Jefferson enshrined in the Declaration of Independence are indeed truly unalienable.

“Remember, it’s the people who tore down the wall – what a great expression of the power of personal freedom and courage. When the Berlin Wall came down, it was an enormous geopolitical earthquake that unleashed waves of events around the world, the aftershocks of which we’re still feeling today.”

Sullivan added, “It seems appropriate that a section of the toppled Berlin Wall should stand here at Thomas Jefferson’s university for a time, and it seems especially appropriate that we should unveil it on our Founder’s Day – the day we celebrate Mr. Jefferson’s birthday, as well as his ideas about education and liberty. The Berlin Wall stood as a barrier to freedom for nearly 30 years during the Cold War, and when it finally fell, it did not fall on its own – it was torn down by people who were energized by the principles of individual freedom and universal human rights.”

Hefner is the founder of two Oklahoma City-based organizations, the Robert & MeiLi Hefner Foundation and The Hefner Collection, which focuses on Chinese art after the Cultural Revolution. Through their philanthropy and the initiatives of their foundation and collections, the Hefners have worked to improve understanding of global relationships, promote education and cross-cultural awareness and advance peace across the world.

In 1990, as the Cold War was nearing an end, Hefner sensed the immensity of the moment and sent a representative to purchase a section of the Berlin Wall.

He ultimately purchased four complete sections. The sections carry great artistry on one side, while the other side is a colorless blank.

“On the west side of the wall, we can see the vibrant colors of free will, liberty and personal freedom,” Hefner said. “But I’ve always thought that it’s the other side that each of us needs to embed in our minds and memories. It’s that dull gray and blank side that’s the most important. It represents the lifeless existence of the bonds of tyranny and the loss of freedom. If there’s one message I would like for you to carry away today, that’s the one.”

Kielbasa presented the closing remarks on an appropriately beautiful spring afternoon. He expressed his enthusiasm for the great potential of the Berlin Wall-related programs that will take place from Nov. 2 through the 25th anniversary of the fall of the wall on Nov. 9, and promised that they will provide the University with a robust platform to engage faculty, students and the entire community.

“The presence of the wall here in the shadow of the Rotunda on the Grounds of Mr. Jefferson’s University and the presentation of this vibrant program featuring our imminent scholars is certain to attraction national attention while providing a backdrop for an important and enlightened discussion about freedom of expression, art, history, politics and culture,” Kielbasa said.

“There is a reason why the arts are hailed as a universal language,” Kielbasa said. “The arts provide perhaps the only means of expression that truly transcends language and cultural barriers, and they provide a sense of common cultural ground that is often lacking yet increasingly important in our world today.

“We believe that this is a unique installation and that it will especially allow us to reflect not only on the Berlin Wall’s place in history, but also on the powerful pull of freedom of expression as a major force that ultimately led to its fall.”

What Is the ‘4th Side’? END_OF_DOCUMENT_TOKEN_TO_BE_REPLACED