Bicentennial Commemoration Continues With Symposium on History With Slavery 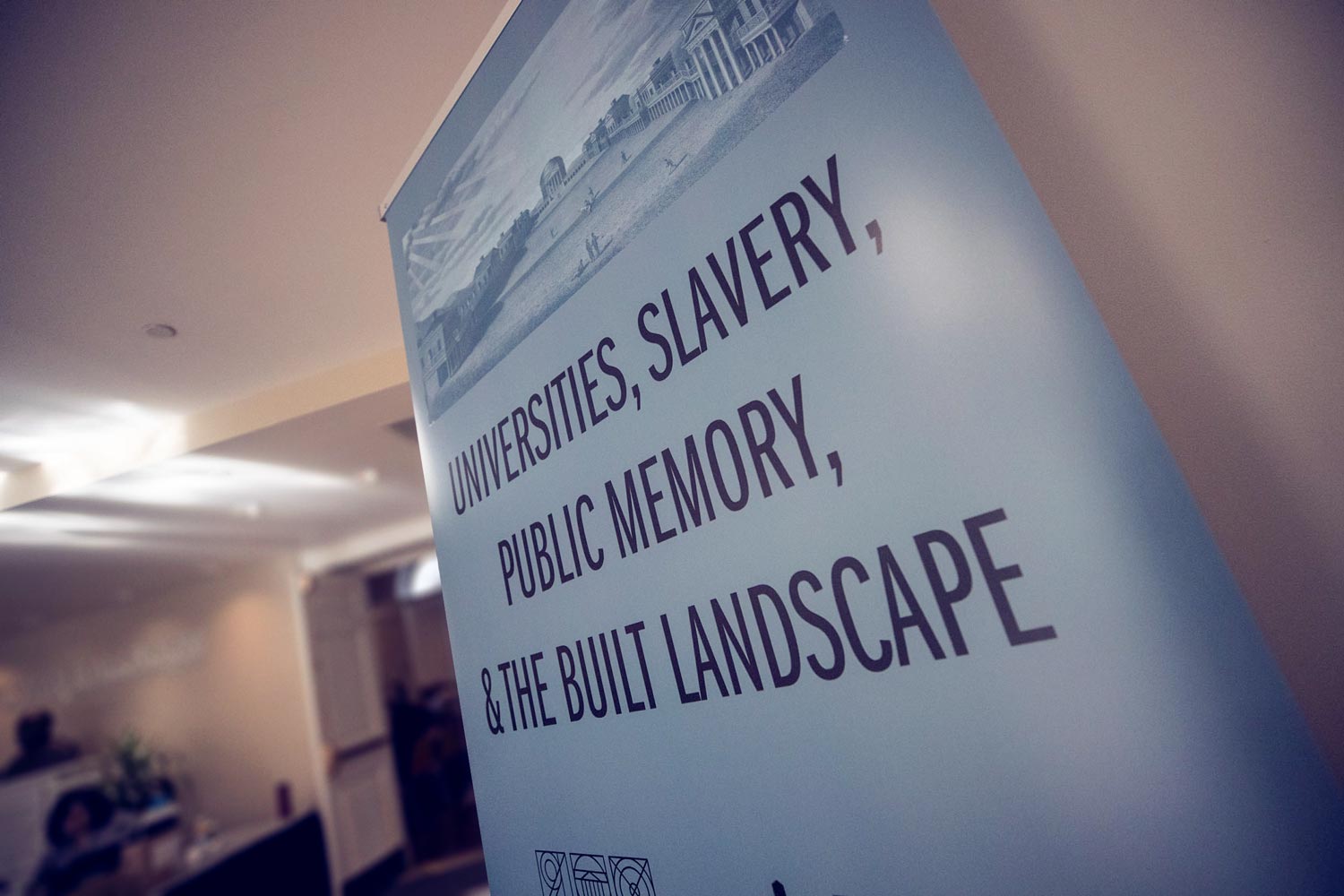 The symposium, “Universities, Slavery, Public Memory and the Built Landscape,” is the second major event of the University’s bicentennial commemoration. (Photos by Sanjay Suchak, University Communications)

One of the core tenets in planning and commemorating the University of Virginia’s bicentennial is telling a fuller story of its history: who has been part of it, how the institution has changed and continues to change.

Toward that end, UVA President Teresa A. Sullivan said hosting this week’s symposium, “Universities, Slavery, Public Memory and the Built Landscape,” as the second major event of the bicentennial commemoration was intentional. Organized by the President’s Commission on Slavery and the University, which Sullivan formed in 2013, the symposium is offering more than 30 panel discussions and concurrent sessions, with 125 presenters from colleges, universities and other institutions sharing how they have begun to grapple with their histories of slavery.

“The University of Virginia has become a leader nationally, educating and commemorating the contributions of the enslaved,” said Dr. Marcus L. Martin, a commission co-chair and UVA’s vice president and chief officer for diversity and equity. The commission’s aims include restoration, roots and remembrance, and discovering new knowledge and new solutions to honor the enslaved laborers who were cornerstones to UVA’s history, he said. 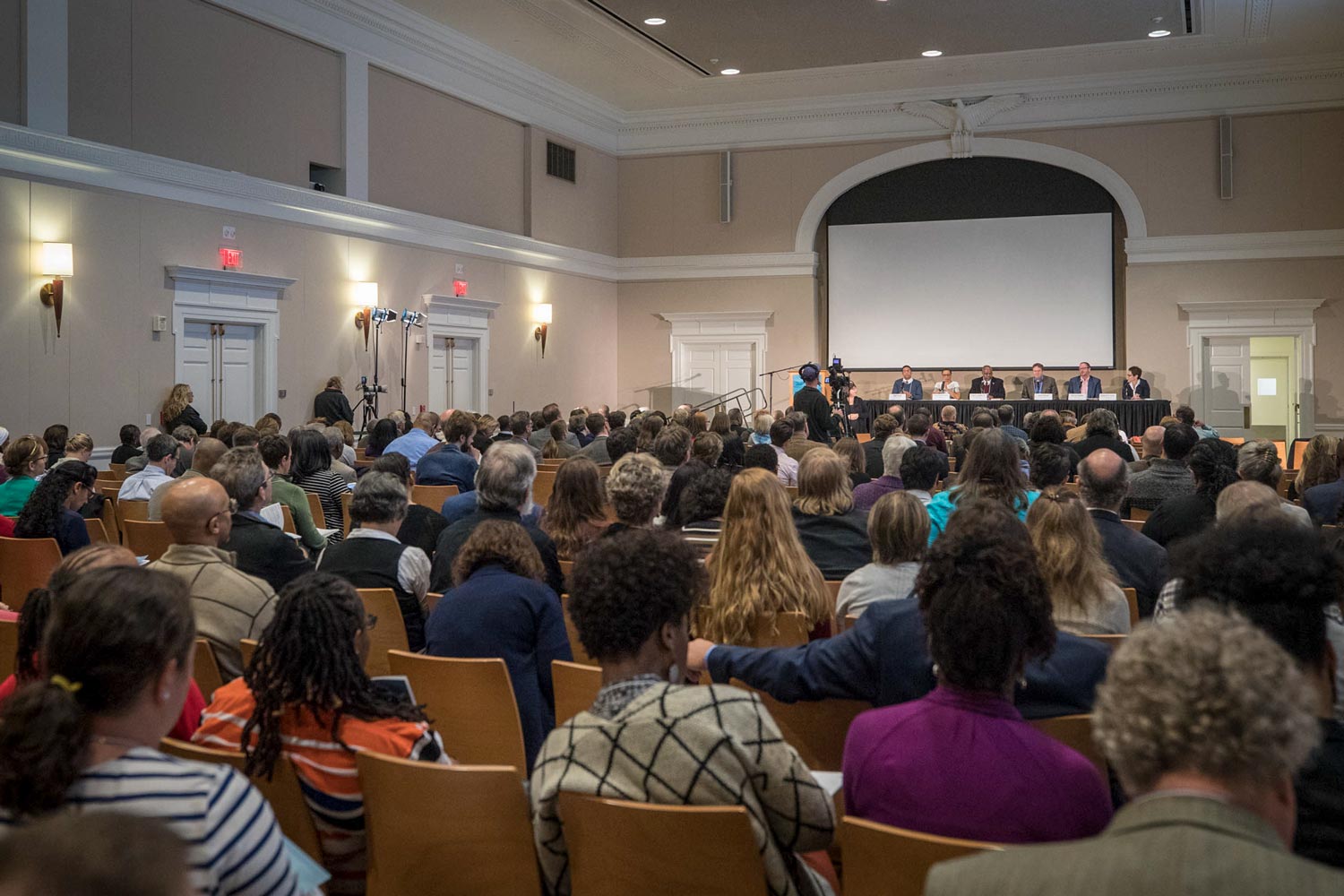 Nearly 500 attendees from 61 colleges and universities, 17 historic sites and other groups, including descendants of the enslaved are attending the symposium, “Universities, Slavery, Public Memory and the Built Landscape.”

The symposium, which started Wednesday and continues through Saturday, is being hosted by the president’s commission, and serves as the semiannual meeting of Universities Studying Slavery consortium. It has drawn nearly 500 attendees from 61 colleges and universities, 17 historic sites and other groups to the Grounds to hear about and discuss the work of investigating, preserving and making public the legacies of slavery at universities and at nearby historic sites. Among the participants, presenting and attending, are descendants of enslaved people, who several speakers emphasized are key collaborators in telling the history of slavery and its legacies.

In his welcoming remarks, commission co-chair and UVA history professor Kirt von Daacke said there’s no clearer evidence of the importance of these efforts and the work that needs to be done than the recent events staged in Charlottesville by white supremacy groups. Presenting the legacy of slavery at UVA, he said, must be a dynamic process to provide visible formats and curricula that acknowledge a fuller past and link it to present issues.

Thursday’s first panel discussion focused on slavery and its legacies at UVA. Moderator Elizabeth R. Varon, Langbourne M. Williams Professor of American History and associate director of UVA’s John L. Nau III Center for Civil War History, offered the theme of challenges to unearthing this history and connecting it to the present with continued commitment to change a culture that has largely excluded this fuller history.

Associate professor Ervin L. Jordan Jr., a research archivist who has worked in UVA’s Albert and Shirley Small Special Collections Library for some 40 years, discussed the painstaking work of trying to piece together what African-Americans did on Grounds and what was done to them, since the records and other documents were created by white leaders and students.

Von Daacke outlined an online initiative he and other faculty members began about five years ago to explore the archives and create digital resources that could be made available. The JUEL project – Jefferson’s University … The Early Life – is digitizing many 19th-century documents in Special Collections, and is recreating 1850s buildings, some of which no longer exist, and digitally placing them back onto the Grounds in 3-D models. UVA students are doing a lot of this work, he said, supported by a grant from the Jefferson Trust.

Varon mentioned that the 19th-century records include “harrowing tales of student violence against slaves,” and how enslaved workers tried to assert their resistance. On the other hand, modern UVA students almost 10 years ago were among the first to advocate for some memorialization of the contributions of enslaved laborers – in fact, first suggesting a memorial whose planned design was recently approved by UVA’s Board of Visitors. 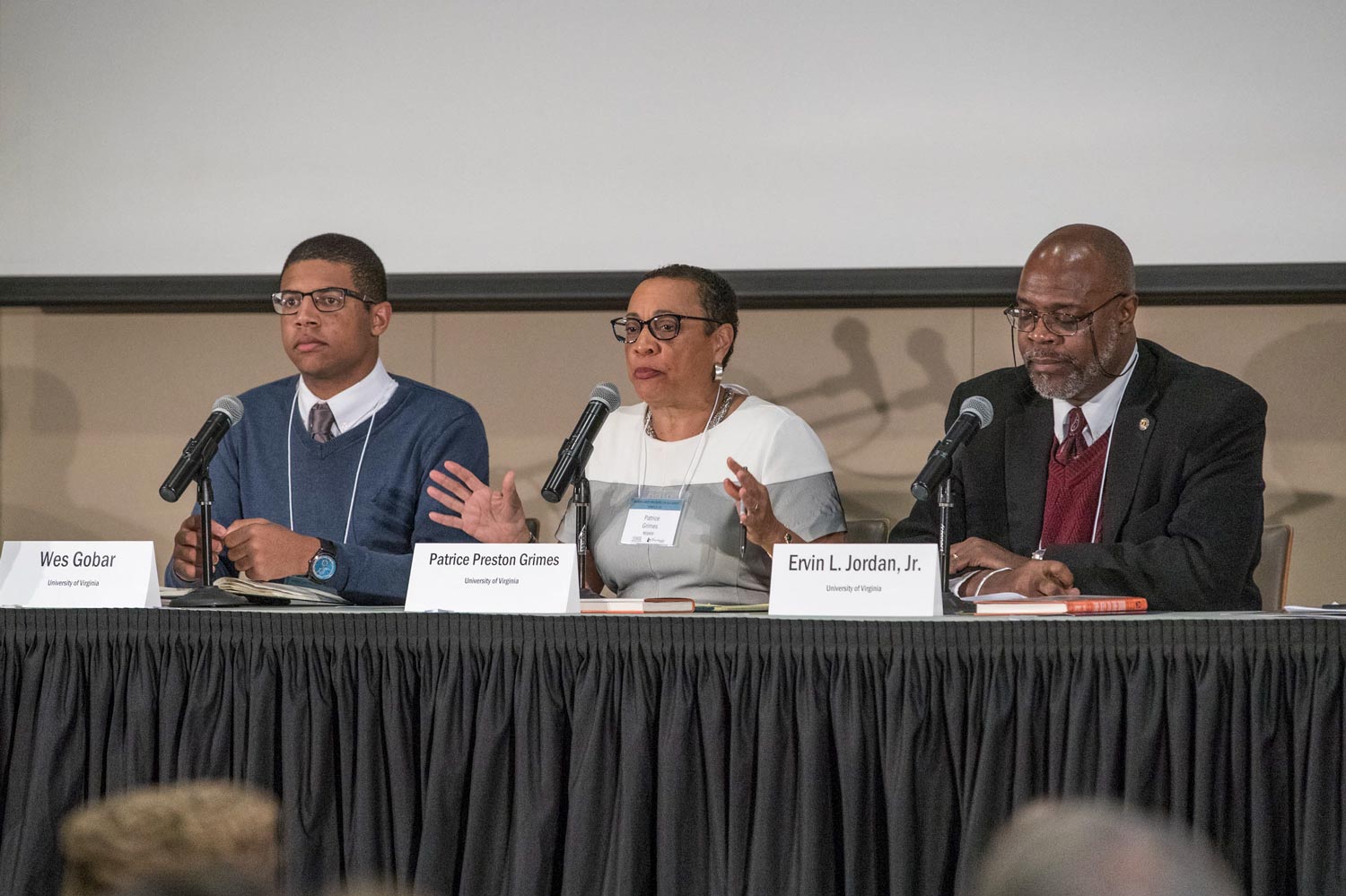 “Students have been the driving edge,” said associate professor of education Patrice Grimes, a member of the commission and associate dean.

“Schools and schooling mirror outside traditional structures,” Grimes said. “What’s crucial is to show why this history is culturally important.”

Von Daacke also outlined the Cornerstone Summer Institute, another commission initiative that brings high school students to the Grounds; its curriculum aims to link the distant past to recent past to today.

“Students say they want to come here because this is a university acknowledging this history,” he said.

He also described the commission’s work to develop courses for UVA students. There is now a course for first- and second-year students offered in the fall that brings in professors from a range of disciplines to teach aspects of the University’s history, and an advanced seminar that will be held in the spring semester enabling students to dive deeper into UVA history.

The design team for the Memorial to Enslaved Laborers conducted a months-long process, meeting with students, faculty and staff and also community members, especially from nearby African-American neighborhoods – which Grimes said was one of the most fascinating collaborations she’s been part of.

Research has thus far uncovered the names of almost 1,000 enslaved people who worked at the University and will be included in the memorial. Jordan estimates there may have been 4,800 enslaved and free blacks based on 19th-century records. He would like to see them honored as heroes and contributors, he said.

Fourth-year student Wes Gobar, president of UVA’s Black Student Alliance, recounted being part of the counterprotest at the Aug. 12 “Unite the Right” rally. There, he saw that the white supremacists – ostensibly there to protest the city’s decision to move statues of Lee and Jackson – were not yelling about the statues, he said, but reflecting their racist culture.

The intimidation and violence of the Aug. 12 rally felt familiar to what he had researched earlier in the summer – the 1887 Thibodaux massacre in Louisiana, when white paramilitary groups killed at least 35 black people and wounded as many as 300 after a massive strike of sugar cane laborers. That violence pacified African-Americans, he said.

The lesson he learned, Gobar said, is to proceed without fear, to keep working to make positive changes.

“I’d like to see more of that in pedagogy and policy, to make progress out of this moment,” he said.

The president’s commission, von Daacke said, is also thinking about how rituals and other events can make this history part of the students’ lived experience and connect them not just to the past but also to the Charlottesville community.