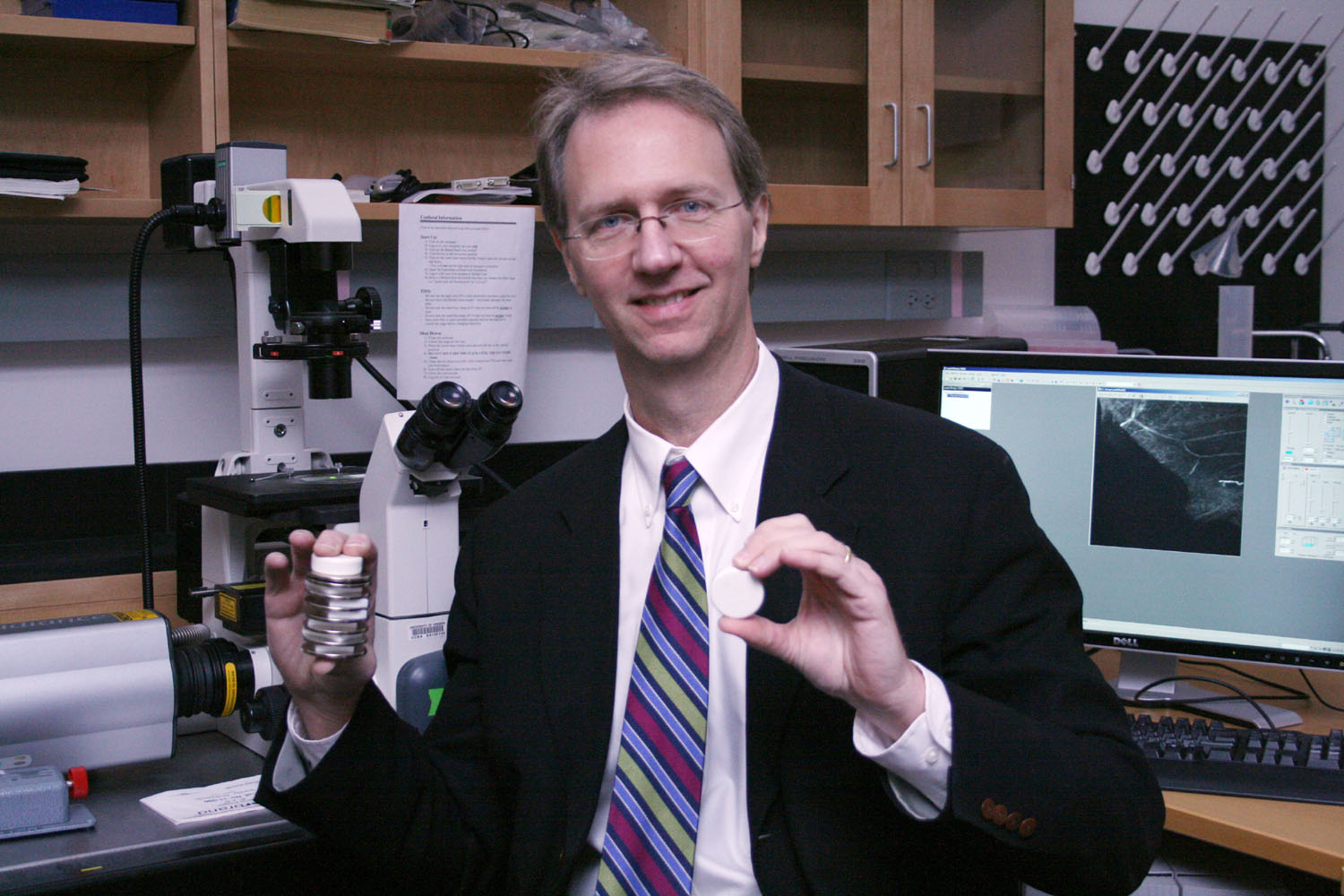 Jan. 2, 2008 — Magnets have been touted for their healing properties since ancient Greece.  Magnetic therapy is still widely used today as an alternative method for treating a number of conditions, from arthritis to depression, but there hasn’t been scientific proof that magnets can heal.

Lack of regulation and widespread public acceptance have turned magnetic therapy into a $5 billion world market.  Hopeful consumers buy bracelets, knee braces, shoe inserts, mattresses, and other products that are embedded with magnets based on anecdotal evidence, hoping for a non-invasive and drug-free cure to what ails them.

“The FDA regulates specific claims of medical efficacy, but in general static magnetic fields are viewed as safe,” notes Thomas Skalak, professor and chair of biomedical engineering at U.Va.
Skalak has been carefully studying magnets for a number of years in order to develop real scientific evidence about the effectiveness of magnetic therapy.

Skalak’s lab leads the field in the area of microcirculation research—the study of blood flow through the body’s tiniest blood vessels.  With a five-year, $875,000 grant from the National Institutes of Health’s National Center for Complementary and Alternative Medicine, Skalak and Cassandra Morris, former Ph.D. student in biomedical engineering, set out to investigate the effect of magnetic therapy on microcirculation.  Initially, they sought to examine a major claim made by companies that sell magnets: that magnets increase blood flow.

The researchers first found evidence to support this claim through research with laboratory rats.  In their initial study, magnets of 70 milliTesla (mT) field strength—about 10 times the strength of the common refrigerator variety—were placed near the rat’s blood vessels.  Quantitative measurements of blood vessel diameter were taken both before and after exposure to the static magnetic fields—the force created by the magnets.  Morris and Skalak found that the force had a significant effect: the vessels that had been dilated constricted, and the constricted vessels dilated, implying that the magnetic field could induce vessel relaxation in tissues with constrained blood supply, ultimately increasing blood flow.

Dilation of blood vessels is often a major cause of swelling at sites of trauma to soft tissues such as muscles or ligaments.  The prior results on vessel constriction led Morris and Skalak to look closer at whether magnets, by limiting blood flow in such cases, would also reduce swelling.  Their most recent research, published in the November 2007 issue of the American Journal of Physiology, yielded affirmative results.

In this study, the hind paws of anesthetized rats were treated with inflammatory agents in order to simulate tissue injury.  Magnetic therapy was then applied to the paws.  The research results indicate that magnets can significantly reduce swelling if applied immediately after tissue trauma.

Since muscle bruising and joint sprains are the most common injuries worldwide, this discovery has significant implications.  “If an injury doesn’t swell, it will heal faster—and the person will experience less pain and better mobility,” says Skalak.  This means that magnets could be used much the way ice packs and compression are now used for everyday sprains, bumps, and bruises, but with more beneficial results.  The ready availability and low cost of this treatment could produce huge gains in worker productivity and quality of life.

Skalak envisions the magnets being particularly useful to high school, college, and professional sports teams, as well as school nurses and retirement communities. He has plans to continue testing the effectiveness of magnets through clinical trials and testing in elite athletes.  A key to the success of magnetic therapy for tissue swelling is careful engineering of the proper field strength at the tissue location, a challenge in which most currently available commercial magnet systems fall short.  The new research should allow Skalak’s biomedical engineering group to design field strengths that provide real benefit for specific injuries and parts of the body.

“We now hope to implement a series of steps, including private investment partners and eventually a major corporate partner, to realize these very widespread applications that will make a positive difference for human health,” says Skalak.

It’s Copperhead Season in Virginia. Here Is What You Need to Know END_OF_DOCUMENT_TOKEN_TO_BE_REPLACED

What’s Next for UVA’s Class of 2022? END_OF_DOCUMENT_TOKEN_TO_BE_REPLACED