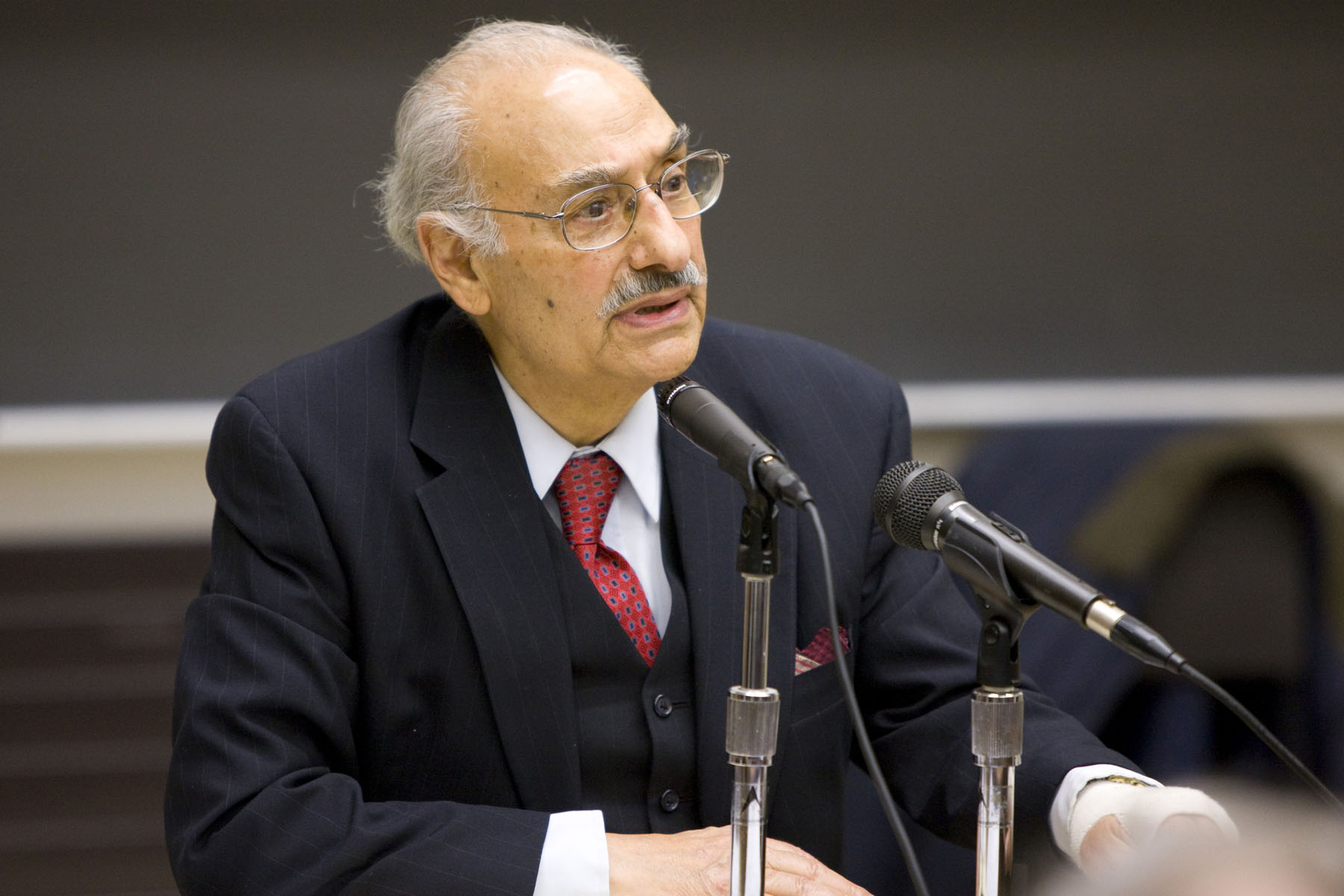 In a forthcoming book from the University of Virginia Press, one of the world’s pre-eminent experts on Iran’s foreign policy makes what he expects to be his final scholarly statement on the subject.

Ruhi K. Ramazani, Edward R. Stettinius Professor Emeritus of Government and Foreign Affairs in U.Va.’s College of Arts & Sciences, has spent the past six decades studying and writing about foreign policy and international politics, with a focus on his native Iran and the Middle East.

Since joining the U.Va. faculty in 1953, he’s written 10 books, authored or edited a plethora of other scholarship, advised a sitting U.S. president during an international crisis, nurtured the lives and careers of countless students, and paved the way for colleagues in an increasingly important area of study at the University.

In “Iran’s Foreign Policy: Independence Without Freedom,” a collection of previously published articles and book chapters that will be released in the fall of 2013, Ramazani makes a case that has been central to much of his scholarship on Iran: that truly understanding the country’s foreign policy requires a nuanced awareness of its culture, people, and long history of occupation and domination by foreign powers.

“Ruhi Ramazani represents much of what is best about the College,” said Meredith Jung-En Woo, Buckner W. Clay Dean of Arts & Sciences. “Throughout his career, he’s been a first-rate scholar, an impactful teacher, and someone who has dedicated his energy to issues of pressing importance to the world. I look forward to his latest work.”

Ramazani has long sought mutual understanding between the land of his birth and his adopted home in the United States, where he is a naturalized citizen and has been an important and independent voice on the contentious relationship between the two countries, said Farzaneh Milani, chair of the Department of Middle Eastern and South Asian Languages and Cultures in the College.

“Consistently and throughout his career, Ruhi Ramazani has been a bridge-builder, rather than someone who erects walls,” Milani said. “He builds bridges between disciplines, between cultures and between different faiths. He is someone who has refused to sell his pen or soul into the service of an ideology or to the dominant discourse of the day.”

The forthcoming book explores the idea that in the years since the 1979 revolution, in which Islamist forces led by Ayatollah Ruhalloah Khomeini overthrew U.S.-backed Shah Mohammad Reza Pahlavi, Iran has achieved the independence the country long sought, but has failed to deliver true freedom to its people.

The book includes a new foreword and afterword, as well as sections on the revolutions of the shah and Khomeini, revolutionary foreign policies, Persian Gulf security, international law and diplomacy, and relations between Iran and the West.

Ramazani said it’s important to remember that Iran’s 1979 revolution came on the heels of centuries of occupation and domination by foreign powers such as Britain and Russia, and after 25 years of heavy U.S. influence. In 1953, the country’s democratically elected prime minister was ousted by U.S. intelligence operations after he attempted to nationalize the country’s oil production, Ramazani said. The CIA then reinstated Pahlavi and propped up his government until 1979, he said.

Though the revolution succeeded in creating an independent Iran, the population has suffered at the hands of a repressive regime that has not integrated into the modern, globally connected world, he said. The new book focuses on the tension between those two ideas.

The adversarial relationship between the U.S. and Iran since has been a source of sadness for Ramazani, who left Iran to study in the U.S. in 1952 after experiencing the violence and instability of Iran firsthand. He graduated with a law degree from U.Va. in 1954 and joined the faculty.

“Ruhi has worked very hard in recent years to see if something could be done to improve the relationship between his country of origin and his adopted country,” said William Quandt, Edward R. Stettinius Jr. Professor of Politics and a longtime friend. “It’s been very frustrating to say the least. We now have almost 30 plus years of almost uninterrupted U.S./Iranian hostility. But he hasn’t given up. He still tries to give a degree of reasoning to this very important topic.”

Ramazani, who is in declining health, said the new book serves as a sort of capstone to his scholarship on Iran. His 1966 volume, “The Foreign Policy of Iran, 1500-1941” and its 1975 sequel, “Iran’s Foreign Policy, 1941-1975: A Study of the Foreign Policy in Modernizing Nations,” are seminal works on the subject.

During the Iranian hostage crisis in 1979, Ramazani advised President Carter on the country’s history. A picture of him talking to the president still sits in his living room.

At the University, Ramazani has helped chart the course for broader Middle Eastern studies, which has grown to include other faculty members specializing in everything from language and culture to politics and religion. When he first started teaching at U.Va., study of the region was confined to one course.

“At an early stage, Ruhi was doing what has now become the vogue that almost all universities are following, which is to pursue what is called global studies,” Milani said. “He has been instrumental in putting Middle East studies at the University of Virginia on the map.”

Ramazani also has deep and admirable ties to the University itself, said Quandt, who last month won the Thomas Jefferson Award, the highest University honor given to faculty members. Ramazani received the award in 1994 – as did his son, English professor Jahan Ramazani, in 2011. They are the only father-son combination to win.

“Ruhi was the first – and for a long time, the only – person who taught anything about the Middle East in the politics department,” Quandt said. “But for years and years he had a large number of students taking a series of courses on the region, at a time when most universities didn’t have anybody teaching this.”

One of those students was current Associated Press intelligence and counterterrorism writer Kimberly Dozier, who earned a master’s degree in foreign affairs from the College in 1993. Dozier recalled quitting her job – against the advice of her employer and parents – to attend graduate school at U.Va., and finding out shortly after she arrived that the department she’d expected to study in had been reorganized.

“So I rushed to see Ruhi Ramazani, and he said, ‘We’ll make this work,’” Dozier recalled. “And he helped arrange a course curriculum cobbling together courses across a number of different departments that allowed me to get a degree that focused on the Middle East. I basically built it around his seminars.”

Ramazani is an independent thinker whose ability to objectively analyze U.S.-Middle Eastern relationships was a good example for a journalist interested in the area, Dozier said. He also takes a personal interest in his students, she said.

Dozier was working as an international correspondent for CBS News in 2006 when she was seriously injured by a car bomb in Iraq. When she returned to the United States, Ramazani reached out, and has kept in touch, she said.

“In this particular business, your star rises and falls depending on your latest job, position or headline. But with Ruhi, that doesn’t matter,” Dozier said. “He sees you as the individual he has taught, and always values you. He was in many ways the best part of U.Va. for me.”

What’s Next for UVA’s Class of 2022? END_OF_DOCUMENT_TOKEN_TO_BE_REPLACED