Brain May ‘See’ More Than the Eyes, Study Indicates 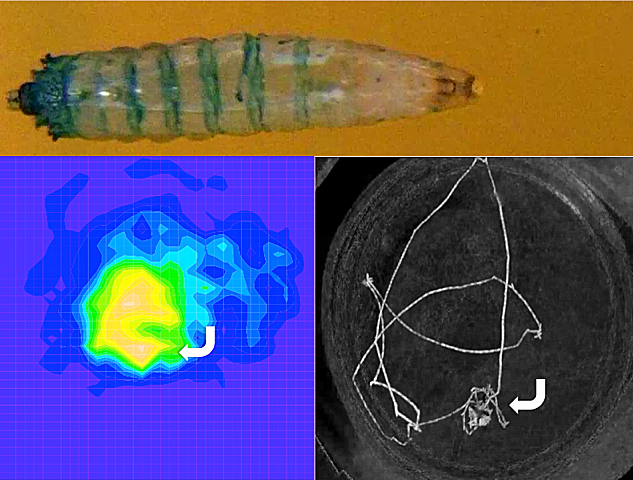 Vision may be less important to “seeing” than is the brain’s ability to process points of light into complex images, according to a new study of the fruit fly visual system currently published in the online journal Nature Communications.

University of Virginia researchers have found that the very simple eyes of fruit fly larvae, with only 24 total photoreceptors (the human eye contains more than 125 million), provide just enough light or visual input to allow the animal’s relatively large brain to assemble that input into images.

“It blows open how we think about vision,” said Barry Condron, a neurobiologist in U.Va.’s College of Arts & Sciences, who oversaw the study. “This tells us that visual input may not be as important to sight as the brain working behind it. In this case, the brain apparently is able to compensate for the minimal visual input.”

Condron’s graduate students, Elizabeth Daubert, Nick Macedonia and Catherine Hamilton, conducted a series of experiments to test the vision of fruit fly larvae after they noticed an interesting behavior of the animals during a different study of the nervous system. They found that when a larva was tethered to the bottom of a petri dish, other larvae were attracted to it as it wiggled attempting to free itself.

The animals apparently saw the writhing motion and were attracted to it, willingly traveling toward it. After several further experiments to understand how they sensed the motion, the researchers learned that the nearly blind animals likely were seeing the action, by wagging their heads side-to-side in a scanning motion to detect it, rather than by only hearing it or feeling vibration or by smelling the trapped larva. This was a surprise because of the very simple and limited vision of fruit fly larvae.

“The answer must be in the large, somewhat sophisticated brain of these animals,” Condron said. “They are able to take just a couple dozen points of light and then process that into recognizable images; something like when an astronomer with a small telescope is able to use techniques to refine a limited image into useful information about a star.”

Condron believes the animals are able to assemble useful images by rapidly scanning their heads and, in so doing, gather up enough light points to allow the brain to compose a panoramic image clear enough to “see.”

The researchers tested this by presenting larva with a video of a writhing larva (therefore no vibration, no sound and no smell) and found that the larvae still detected and sought out the struggling larva on the video. They also learned that if they slowed down or sped up the video, the larvae were less attracted or not attracted at all to the video larva. They also were not attracted to dead real larva, or to tethered larva of another species, and they also had difficulty finding tethered larva in near darkness.

“Apparently they are – to a very high degree – visually sensitive to detail and rate of motion and can recognize their own species in this way,” Condron said. “This provides us with a good model for trying to understand the role that the brain plays in helping organisms, including humans, to process images, such as recognizing faces.”

He noted that the head scanning apparently plays an important role in helping the larvae to bring together multiple visual inputs into a unified whole for the brain to process, similar to collecting together multiple pixels to form a picture. Condron said people with severe vision loss also tend to use head scanning as a means for collecting a “picture” from very dim light sources. Likewise, visually impaired people who have received experimental retinal implants of just a small number of pixels also often scan their heads to take in enough light to form mental images.

“It’s easy for lab biologists to view fruit flies as simple animals that just feed and reproduce, but we are beginning to realize that that may be in contradiction to the big brain,” Condron said. “There’s more to what they are able to do than previously thought, whether using that brain for behaviors or for constructing images from a limited visual system.”

He said the fruit fly serves as an excellent model for studying neurons because the animal has only about 20,000 of them, whereas humans have about 100 billion. Yet there are many similarities to how fruit fly and human neurons work. According to Condron, researchers are within a year of mapping the entire nervous system of the fruit fly, which then will pave the way for greater understanding of how neurons work in a range of organisms, including humans.

Class of 2020: Memories and Moments From a Long-Anticipated Celebration END_OF_DOCUMENT_TOKEN_TO_BE_REPLACED