Brighter Together: Beginning Friday, Pop-Up Art Will Light Up Grounds 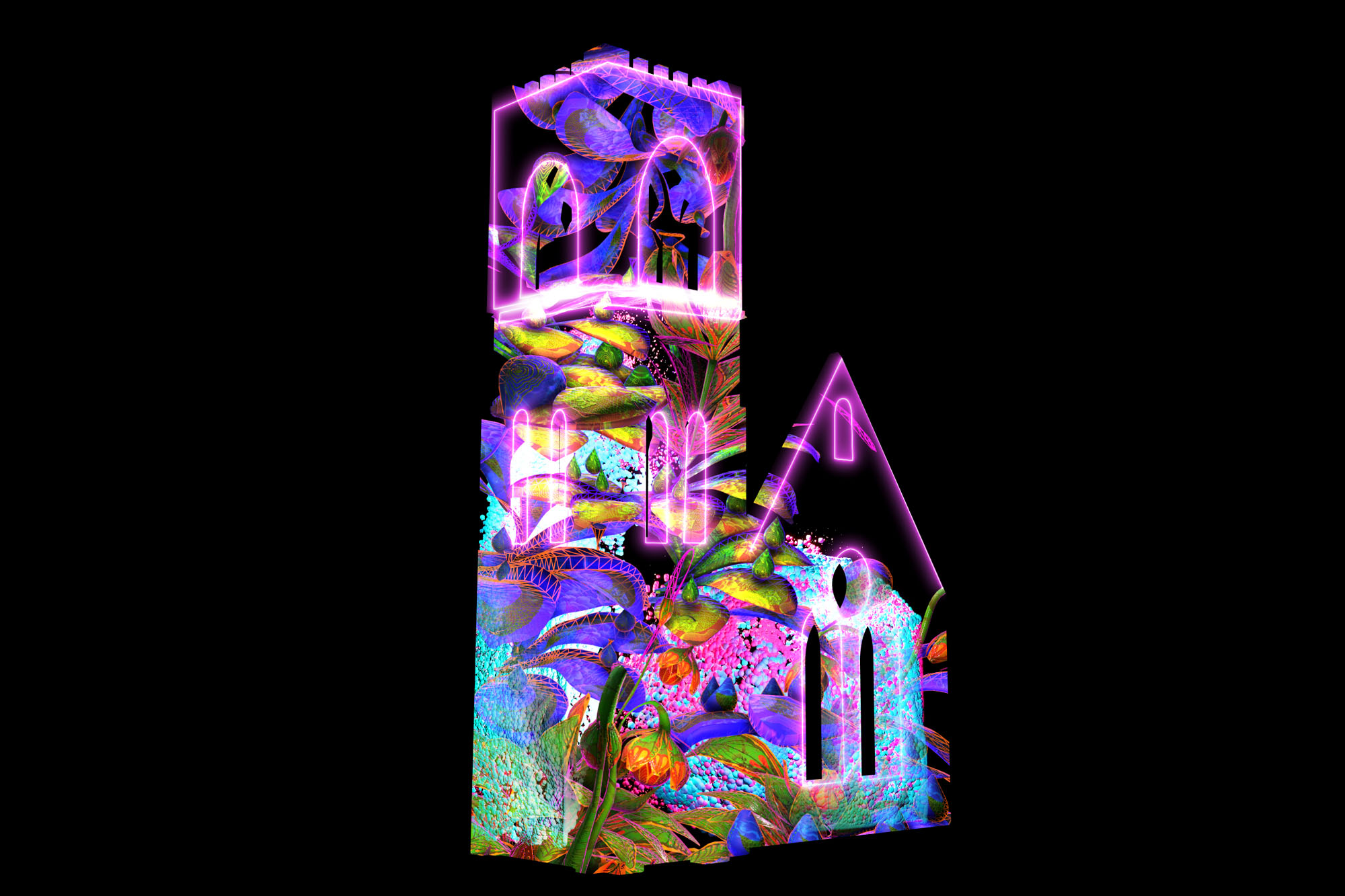 On Friday, the University of Virginia Chapel will not only toll the hour, but also light up the sky with the first of several pop-up projection mapping shows planned for UVA’s most iconic buildings this spring.

The shows are part of a project called “Brighter Together,” presented by UVA Arts, the Office of the Provost and Vice Provost for the Arts, and the Division of Student Affairs. They will feature the projection mapping artwork of local artist Jeff Dobrow, whose colorful, dynamic shows have danced across many buildings and parks in Charlottesville, including IX Art Park, Monticello and sites on the Downtown Mall.

Five shows are scheduled at UVA over the next two months, each with two nights of projections starting after dusk and playing on loop for four hours, so that viewers can stop by at various times. All attendees must adhere to UVA COVID-19 protocols, including wearing masks and practicing physical distancing.

The displays will include elements of student-created videos; highlight art around Grounds, including the Kluge-Ruhe Aboriginal Art Collection of UVA; and incorporate music, starting off with original music by Red Flower Lake during the chapel show. Each show is also presented with support from the AV Company.

All of it, organizers hope, will evoke themes of spring and renewal, a brighter future ahead after a long, tough year at UVA and around the world.

Several students helped to plan the project, including third-year student Mica Vilanova, who designed the Brighter Together logo and is part of the student-led #YOUva campaign that has helped students find safe ways to come together during the pandemic. She hopes the shows will lift the spirits of anyone walking by.

“A lot of us are feeling Zoom fatigue, or pandemic fatigue, but one nice thing has been getting outside as the weather has grown nicer,” she said. “I hope that when people are walking by, they can see something beautiful and it will bring a little bit of joy during this time.”

UVA Vice Provost for the Arts Jody Kielbasa said the success of a previous projection mapping show, held during UVA’s Bicentennial Celebration, inspired organizers as they looked for safe ways to bring students together during the pandemic.

“UVA Arts is excited to partner with Student Affairs to present ‘Brighter Together,’ a projection mapping installation series that highlights the work of artist Jeff Dobrow,” he said. “Inspired by the success of the projection mapping on the Rotunda as a major feature of the 2017 Bicentennial Launch Celebration, we are thrilled to be able to highlight the architecture of UVA with a stunning kaleidoscope of light and music that we hope will bring the UVA community together outside to share in this artistic experience, while remaining safe and socially distanced.”

Dobrow said he was excited to see his art on UVA’s Grounds.

“I am constantly looking for opportunities to engage new audiences with technology-based art and I’ve waited some years for a chance to do a project with UVA,” he said. “Using projection mapping to present some large-scale, uplifting, fun art and music is a perfect opportunity.”

All of the shows are free, and students and members of the community can stop by to watch anytime. Public health protocols, including wearing masks, gathering in groups of 10 or fewer and remaining at least six feet apart whenever possible, remain in effect.

When Less Is More: How Harnessing the Power of Subtraction Can Add to Life END_OF_DOCUMENT_TOKEN_TO_BE_REPLACED