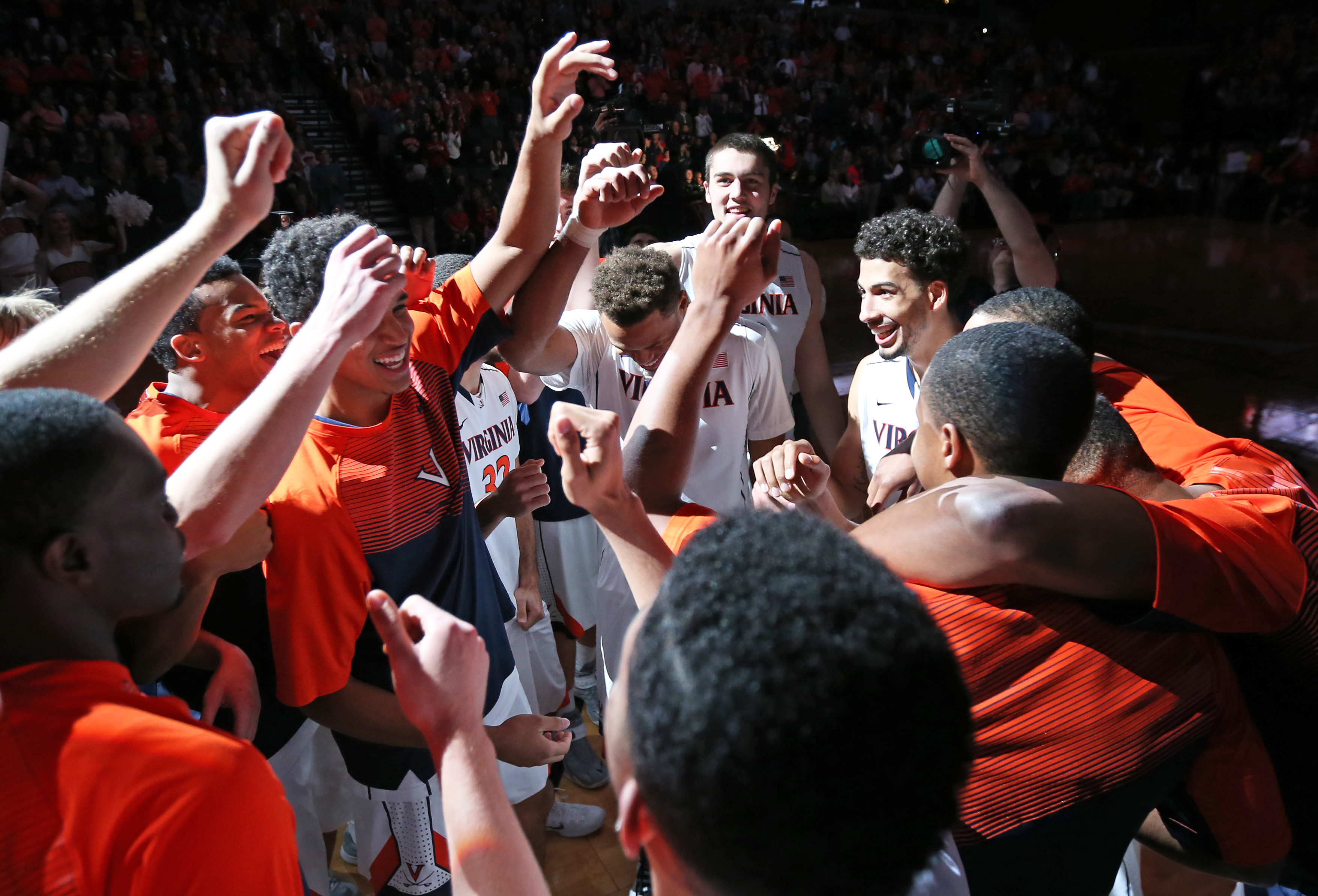 Among the items up for raffle is a jersey signed by the 2015 ACC regular-season champion U.Va. men&#39;s basketball team.

A student project will give away a collection of signed University of Virginia sports items, including a jersey signed by the entire men’s basketball team, in conjunction with the 2015 NCAA men’s basketball tournament kickoff this week.

Five McIntire School of Commerce students created the “March Madness Raffle” as part of their “Project Management” course. Taught by Jason Williamson, an assistant professor of information technology, the project challenges students to create meaningful charity projects with a budget of $500.

“I give them two rules,” Williamson said. “[The project] has to be legal, and it has to be moral.”

The course has spawned 64 student charity projects over the past four semesters and has raised close to $45,000 for local charities. Focused on experiential learning, the course is an exercise in creativity and difference-making, paired with learning about scheduling, cost estimation, resource planning and the IT tools necessary to carry out the project.

This isn’t the first sports gear auction that has come out of the class, but project ideas have been building off each other every year, Williamson said. Hackathons, which bring students together to develop smartphone apps, have run over the past four semesters, along with other online auctions and fundraisers for local charities.

“The class is about, ‘How do you start getting your heart bent toward something bigger than you?’” Williamson said. “And if we can make it real, they’re going to see the impact of what they do in the community and do what they need to get the project done.”

Fans can view the items up for raffle when MarchMadnessRaffle.com launches Thursday. Ticket sales begin Sunday and run through March 31.

The items in the sports raffle fall in two categories: signed items and experiences. Among the signed items are a jersey signed by the entire current men’s basketball team (a No. 2 seed in the NCAA Tournament); baseballs signed by the U.Va. baseball team, runners-up in the College World Series last summer; and equipment signed by the NCAA champion men’s soccer team.

Among the experiential offerings are lunch and a drive with economics professor Ken Elzinga in one of his antique street rods, a round of golf with Dean of Students Allen Groves and the opportunity to spend a home football game in President Teresa A. Sullivan’s Scott Stadium suite next fall.

Tickets range between $3 and $5, and proceeds will benefit The Haven, a Charlottesville day shelter for the homeless, said Kylie Philbin, a team member and fourth-year commerce student.

Philbin said the class has taught her about organizing work with computer resources, and has made project management much easier to visualize. A co-chair of Pancakes for Parkinson’s, U.Va. largest student-run philanthropic fundraiser, last fall, she said she could definitely take the IT and website-building skills she’s learned in this class with her.

“I’ve never launched a website before, and I feel like the class has really taught me how to maximize all the IT and computer resources out there,” she said. “I probably should have taken this class two years ago. It helpful to learn about these programs so when I’m on large teams working with companies, it’ll be familiar.”

As for entering their own contest, “I’m into basketball, so I’ll definitely be putting in some of my money, too,” Philbin said.

Here Is What You Need to Know About the New Coronavirus Variant, Omicron END_OF_DOCUMENT_TOKEN_TO_BE_REPLACED

Fall Is in the Air on Grounds END_OF_DOCUMENT_TOKEN_TO_BE_REPLACED

Meet the Cats and Dogs Your CVC Donation Supports END_OF_DOCUMENT_TOKEN_TO_BE_REPLACED