Casteen's Finals Farewell Focuses on the Class of 2010 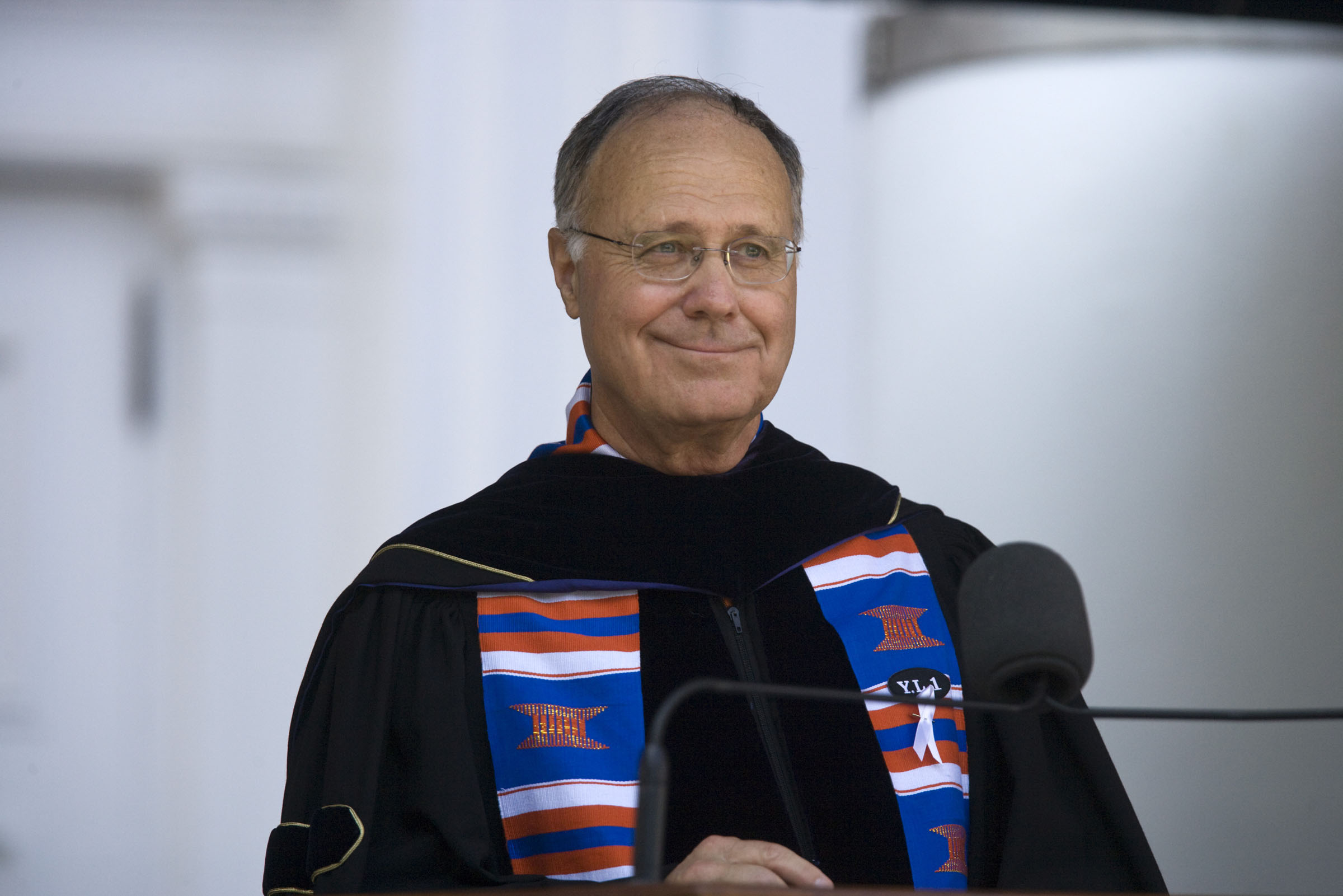 May 23, 2010 — John T. Casteen III would have been forgiven a few minutes of self-indulgence as he addressed the University of Virginia's class of 2010 during Sunday's Final Exercises, the last major public event of his 20-year presidency.

He might have reflected on the monumental changes in the University that he has witnessed, and often led, in the half-century since he arrived as a first-year student. Or he might have delivered a treatise on his vision of the University's future.

Instead, he focused on the graduates themselves. In an address that was at first scholarly – citing Thomas Jefferson, Ralph Waldo Emerson and John Keats – and ultimately sentimental and evocative, Casteen urged the graduates to act upon the knowledge that they have gained.

"The challenge, of course, is to use what you have learned here as an agent for good," he said, adding that the graduates "have the capacity and the obligation to fight evil and inequity."

"Albert Camus wrote that 'The evil that is in the world almost always comes out of ignorance,'" he said. "Knowledge, then, is evil's first enemy and good's first line of defense."

Shortly thereafter, Casteen departed from his previously prepared remarks. The additional passage contained his most personal reflections, and he delivered them haltingly, in a voice that occasionally quavered with emotion.

He spoke directly to the students of "what goes away as you leave this place, but comes back in memory": "The murmur that you hear in libraries or in study groups as people work together in the evening. The sounds of music. The sounds of people talking to their parents on cell phones as they walk through corridors or down the Lawn. The sound of ROTC units running past in the morning on their morning workouts. The sounds of the marching band practicing on Carr's Hill Field. The sounds of student life – sorority rush, joining other organizations, being together in the groups that define the community of student existence. The sounds of traffic. The sounds of carols, sung right at the end of the semester, as you'd really rather go home, but then you hear that music and you stay a bit longer. The sounds of children on the Lawn during Halloween. The Chapel's bells. The cheers at games, no matter what the sport.
"And," he concluded, "the name of Yeardley Love."

Love was the fourth-year women's lacrosse player who was slain in her apartment May 3, allegedly at the hands of a fellow student – a death that rocked the University community in general and deeply affected Casteen.

Love and three other members of the graduating class who died during the year – Joseph Arwood, Stephanie Jean-Charles and Scott May – were remembered in a poignant moment of silence at the beginning of the main ceremony and later were awarded posthumous degrees by their respective departments.

Love's classmates in the Department of Politics gathered in Memorial Gymnasium for their diploma ceremony. After the graduates had processed across the stage, department chairman Jeffrey Legro acknowledged that one of their number was not with them "because of a life tragically cut short."

"We're not mourning Yeardley. We are celebrating her achievements as a member of the class of 2010," he said.

Legro paused and intoned, "Yeardley Reynolds Love." Love's cousin, Lawren McChesney, a 2006 U.Va. graduate, accepted the degree on her behalf as the graduates and their families saluted Love with a standing ovation.

It was but one scene from a complicated day, with many subplots.

Rain threatened to soak the ceremony for a third straight year, but the sun burned through the overcast during the academic procession down the Lawn.

And Casteen's successor, President-elect Teresa Sullivan, and her husband, Douglas Laycock, who will join the Law School faculty, took in the ceremony from seats near the dais.

Though Casteen declined to make reference to his accomplishments during his keynote remarks, others lauded his two decades of leadership.

In introducing Casteen, University Rector John O. "Dubby" Wynne outlined what he called Casteen's "profound impact." He cited the 134 buildings erected during his presidency, representing 42 percent of the University's total built space; the new programs created under his watch, including the Frank Batten School of Leadership and Public Policy and the AccessUVa financial aid program; and his "determination to diversify the University and make it accessible and affordable to everyone." Half of all living alumni, Wynne said, will have graduated under Casteen's tenure.

"His commitment to strengthening the University despite large declines in state funding has allowed our beloved University to remain strong, relatively and absolutely, while many other universities are in decline," said Wynne, who later added that Casteen is "a remarkable man, right for the time at Mr. Jefferson's university."

After the emotional conclusion of Casteen's remarks, Wynne read a letter from the University's secret Seven Society.

"Take comfort in knowing that your work has fulfilled the bold vision of Mr. Jefferson. Take pride in knowing future generations will no doubt seek to realize yours," the society wrote. "The immense change the University has undergone over the last two decades has not taken place at the whimsical hand of chance, nor through acquiescence to inevitability. Rather, Mr. Casteen, your steady and intentional leadership has given this fine institution a renewed purpose and an unparalleled place among public universities.

"For this, the Seven Society offers you its deepest gratitude."

The graduates accorded Casteen standing ovations before and after his remarks.

The ceremonies went off without a hitch, and the graduates were high-spirited . Their black robes set in relief the many splashes of color, both official (stoles, braids and sashes with various meanings) and unofficial (a breathtaking array of helium balloons and festively decorated mortarboards).

In all, the University awarded 6,256 degrees, including 3,570 bachelor's degrees, 517 first professional degrees, and 2,169 graduate degrees.

In Memoriam: Life of Drama Professor To Be Honored Sunday END_OF_DOCUMENT_TOKEN_TO_BE_REPLACED