Catching Up With The Alumnus Behind ‘Phony Bennett’ 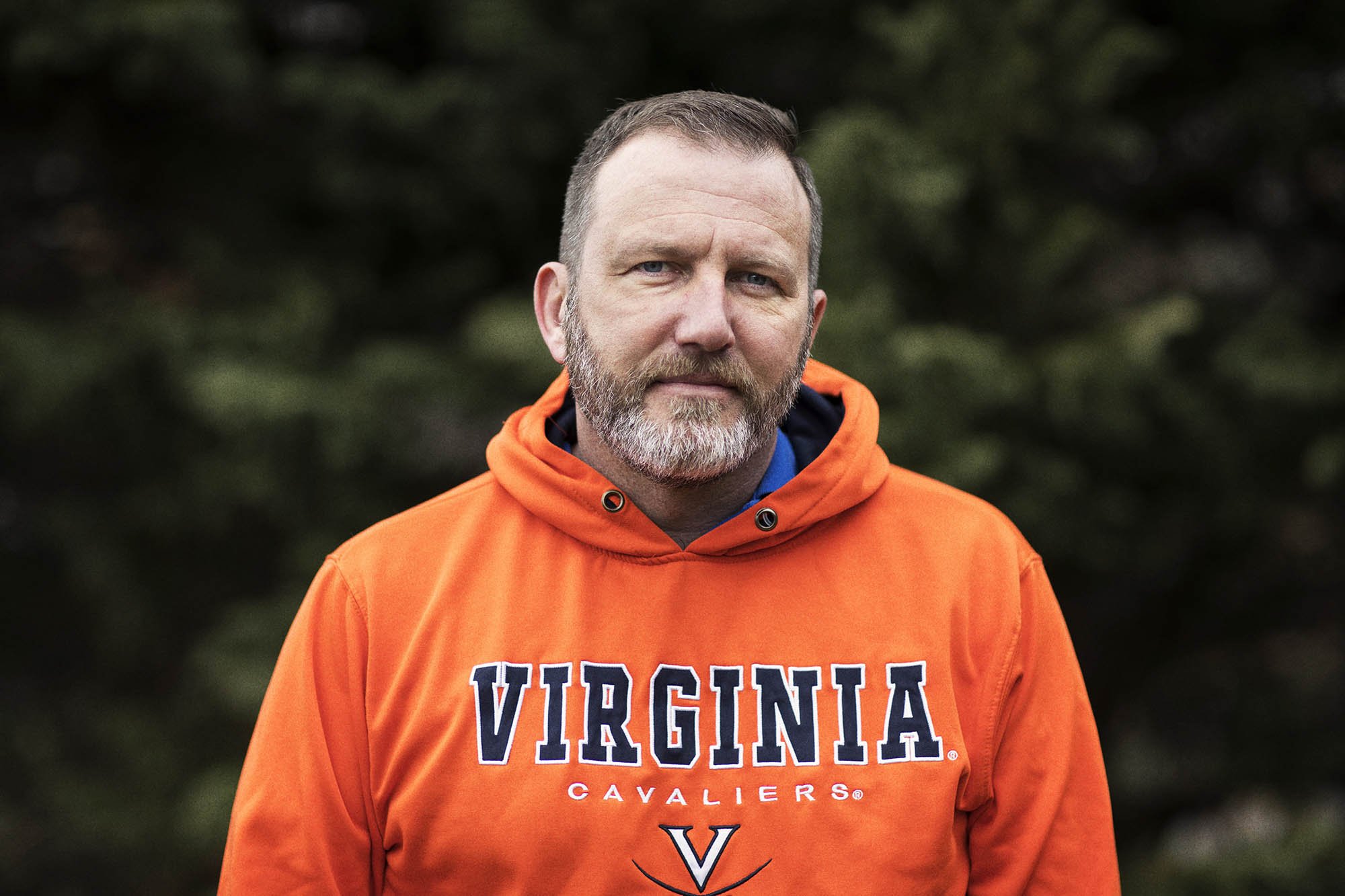 What would you do if something you created as a joke had somehow turned into an endeavor in which nearly 20,000 people were “following” you?

For University of Virginia alumnus Chris Dembitz, the answer was an easy one.

As part of Childhood Cancer Awareness Month in September, Dembitz – the man behind the popular Twitter persona “Phony Bennett” – raised more than $8,000 for the UVA Children's Hospital oncology unit through a fundraiser called “I Am Phony Bennett.”

At the end of the video, Dembitz is with his daughter, Audrey. They encouraged viewers to buy a T-shirt emblazoned with the phrase, “I Am Phony Bennett.”

“By purchasing one of these shirts, you can help kids with cancer and also let the world know that as sports fans, we are all fake coaches,” Dembert quips in the video.

The cause is close to Dembitz’ heart. Audrey was born with neuroblastoma, a type of brain cancer, and is now in remission.

“The funds went directly to help the kids at the UVA Hospital,” Dembitz said. “There’s so much that these children’s hospitals do that can make going to the hospital a less unpleasant experience. There are a lot of services they provide that insurance doesn’t pay for that just have to come out of donations or operating costs, so to be able to support that a little bit was nice.”

With the UVA men’s basketball scheduled to begin play in the NCAA Tournament on Saturday against Ohio University, UVA Today caught up with Dembitz – who has 19,500 Twitter followers – to learn more about the cause, how his life has changed since going public and of course, how he sees the Hoos faring in this year’s Big Dance.

Q. What was the response like from the UVA community and your Twitter followers as you tried to raise money for the oncology unity at UVA Children’s Hospital? Were you pretty blown away by the support?

A. Yeah, and not just the people who bought shirts but the people who jumped in to do the videos. The first person I contacted was [ESPN commentator] Seth Greenberg because he had been on my old podcast and has always just been a super-nice guy. I got a text message in the middle of the night and it was the video of Seth doing his part. That blew me away. It was like, ‘OK, we’re going to get some people to watch this.’ I got really excited about it at that point.

And then Mark Titus [of Fox Sports] did one and then so many athletes, like Kyle Guy and Justin Anderson. It was just really neat. The whole week leading up to it I kept getting text messages from different players and some of these other media types. It was an easy way for them to give back and was just really special. And a lot of the guys, in addition to doing that, also made donations on their own. I was just so proud of it because it’s a Twitter account, right? I make jokes and hopefully people laugh and we kind of commiserate, but it feels special to be able to do something a little bit more concrete that actually has some value to somebody.

I just don’t see how these one-on-one quarantine workouts for #UVa are beneficial pic.twitter.com/obRXe6zXJN

Q. This was part of a concerted effort on your part to use your Twitter platform to give back. A lot of people on there don’t really do that.

A. I like being able to use [the platform] for something good.

Back when I did stand-up [comedy], a comic I knew, Bob Featherer, asked me why I never did political material on stage and I said, “Well, I don’t want to upset the audience.” He said, “If you have an audience and you’ve got people who are paying attention to you, it’s really a shame, almost a moral failing to not try and do something positive.”

That’s something I’ve thought about for a long time. I’ve got a lot of people who follow me … Not doing anything beneficial with it does kind of seem like a missed opportunity. So it’s nice to be able to do positive things.

Q. As a huge UVA basketball fan, what has been it like for you this last year or so?

A. It’s actually been a roller coaster since UVA Today first did the story in 2018 because that was the year we lost to UMBC [chuckle], and then the next year we won the national championship. Then, last year, just having the rug pulled out from under you – college basketball is my favorite sport. Given the time I devote to what I do on Twitter, it’s something I’m really dedicated to. Losing that – it’s depressing.

In the bigger picture, I don’t think any of us were prepared for kind of the broader depression that we’d see as a society with how long this has gone on. So it felt really good when college basketball started back up, even though there were a lot of postponed games and stuff. It still didn’t feel like a normal season.

And then there were the emotions of this past Friday when UVA has to pull out of the ACC Tournament and you just got that same feeling that you did a year ago. It was like, “Is this it? Is our basketball season going to be over? Are we done?” You feel bad for the players, but also as fans this is the kind of thing we live for – so I’m glad that it looks like we’ll be able to field a team of some sort, even though we won’t have practiced much in the past week.

It’s been tough, but more broadly speaking, I don’t want to be complaining that there’s no basketball when we’ve got a half-million dead Americans from [COVID] and just so much turmoil with the toll that it’s taken on people. Basketball seems like a small thing, but it also very representative of the kinds of normal things we’ve lost during all this.

Filling out my bracket and looking at the Sweet Sixteen matchup with Gonzaga like pic.twitter.com/coRXed4xYA

I don't know whose bracket this is, but they're gonna have a hell of a time crumpling it up angrily after they lose a final four team in the first weekend. https://t.co/59WoAoslFW

Q. Three years ago, you elected to come out of the shadows, so to speak, through an interview with us, and reveal yourself as the guy behind Phony Bennett. What’s life been like for you since then? What have been some of the positives and negatives? Are you still glad you did it?

A. Oh yeah, for sure. It hasn’t really changed all that much. Most folks on Twitter, they know my identity, but on Twitter I’m still just Phony. It’s funny because when we started these podcasts on Locker Room Access they asked, ‘Do you want to be Phony or Chris?’ I’m like, ‘Well, people know me as Phony – so I’ll just continue to be Phony.’ I’m not really interested in trying to develop Chris Dembitz as some kind of media personality. I like keeping that abstraction there with Phony Bennett.

After the 2018 [UVA Today] article, the [Norfolk] Virginian-Pilot did one and they ran it the day after the UMBC game. I wake up the morning after, still just so distraught and depressed that we became the first No. 1 seed to lose to a 16 and go and get the paper. Because the game started so late, [the result] wasn’t even in there. Instead, my picture’s on the front page of the sports section. It was like all my dreams come true in the worst way possible [laughing]. I was too depressed to be excited about it.

Q. Is it crazy to think you’ve been doing this almost nine years now?

A. Yeah, I mean I’m surprised it lasted a year. I certainly didn’t set out thinking it was going to be any sort of long-term thing, or even that it was going to be successful. It was like, “I’ll make a couple of jokes, this might be funny.” It’s quite odd that it’s still around and interesting how it’s evolved. It’s far from being a fake coach account anymore. I mean, that’s the name on it, but that’s not how I tweet. I tweet, more less, whatever I want, and people seem to be OK with it. I’m not looking at hanging it up any time soon, but I suppose at some point I’ll get tired of it.

Q. What do you make of UVA’s bracket? Any thoughts on Ohio? What are your thoughts on the team’s chances in the tournament?

A. I think we’re going to be a possible upset pick because we’ll be lucky if we get in two practices. … That’s going to put us in a tough position. Ohio has a really great point guard, Jason Preston, you see a lot of LaMelo [Ball] comparisons for him. He’s a scorer and has a really high assist rate. It’s really setting up for Ohio to upset us.

That said, I think we’re definitely the better team. I just don’t know that we’ll be able to play at 100%, or even 95%. It will be a real test for the coaching. But now the other side of it is it’s a real opportunity for the team to come together. I think you see a lot of times in sports adversity really drive success. Obviously, we know what the UMBC adversity did for us. Hopefully they’ll use this as a motivating factor to kind of come together.