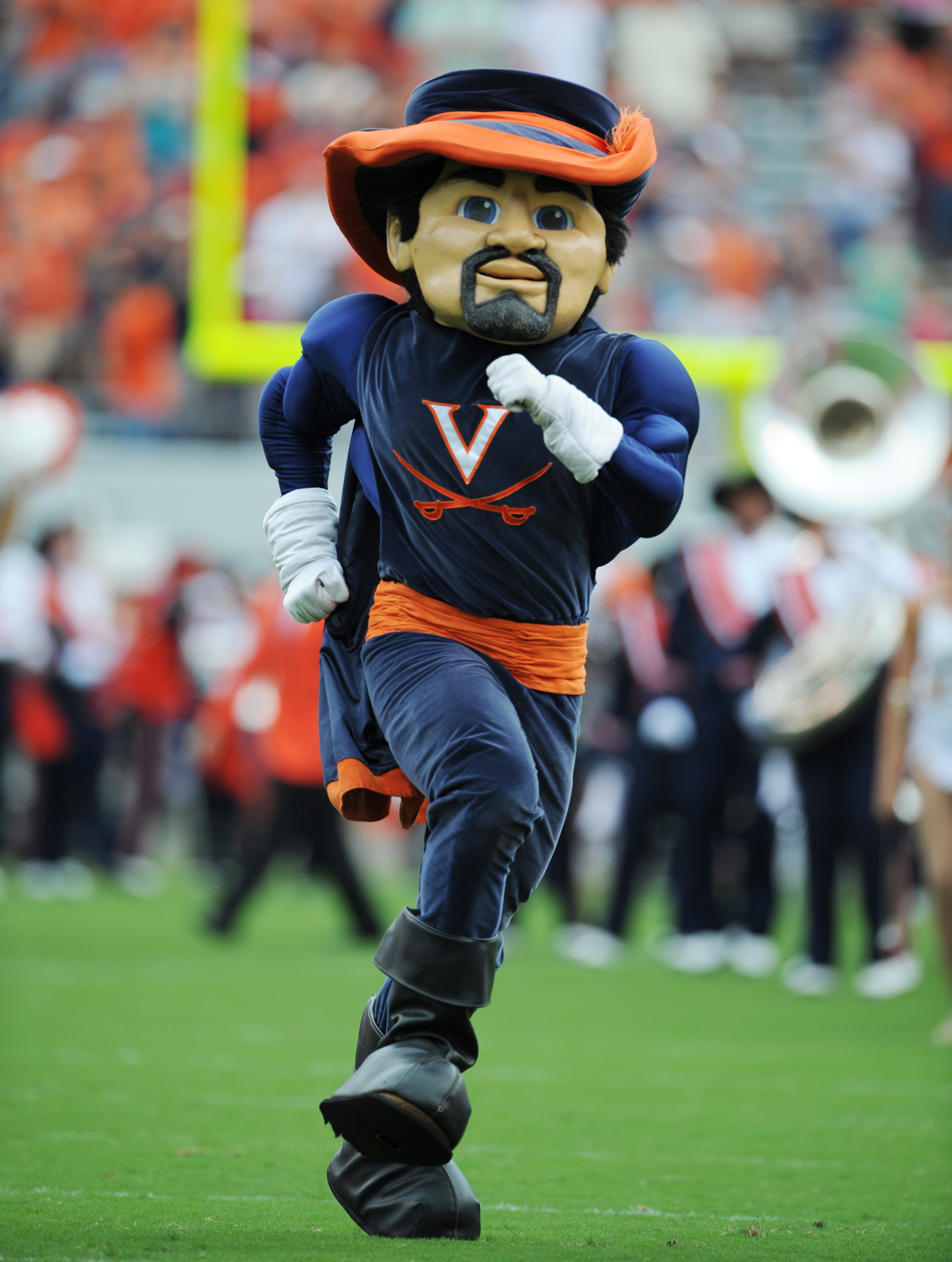 If you stand between 5-foot-11 and 6-foot-5, can wear a hot and heavy costume for hours in 90-degree heat, entertain thousands and occasionally sprint carrying a large flag on a pole, you might have what it takes to become U.Va.&amp;rsquo;s athletic mascot.

When University of Virginia football stars Greyson Lambert, Anthony Harris and Henry Coley take the field with their teammates Saturday afternoon to face the University of Richmond, their fans will be riled up by another Cavalier superstar: Cav Man.

The face of Virginia athletics and Wahoo spirit, Cav Man is the costumed mascot of U.Va. He gets the crowd on its collective feet as the team enters the field, encourages fan enthusiasm for key plays, and spends a lot of time being seized for photo opps.

Famous for his pregame “Adventures of Cav Man” skits on Scott Stadium’s giant video board, he invariably defeats the opponent’s mascot (through the magic of computer-generated imagery), Cav Man may be the true superstar of Cavalier victory.

But who is the man behind the mask?

More accurately, who are the men? Three students take the stadium each football game day – one working the pregame, another the first half and the final student finishing the game, explained Kelley Haney, spirit teams coordinator for Virginia Athletics, who manages the cheer teams and mascots.

The man inside the suit matters just as much as what he represents. The oversized mascot suit doesn’t stand a petite frame; Cav Man is required to be between 5-foot-11 and 6-foot-5 in order to manage the size of his character’s costume.

In addition to the requisite height, the students have to have personality to add to the character. Haney hosts open tryouts in the spring, typically drawing between six and 10 students who perform skits and dance to music.

The attendees are also asked to put on the suit and get clever with props. “The suit is hot and heavy, which most people don’t expect,” she said. “It’s funny. They find their movements are small [once] inside the suit.”

Crucial to tryouts is the ability to carry the U.Va. flag, which is waved when the team scores. The strength required to run with both the suit and the flag eliminates some contenders. “There’s a technique to managing it all,” Haney said.

To date, there’s never been a female Cav Man. However, Haney is not opposed to accepting one. “We’ve had girls who are interested, but because of the construction of the suit, it doesn’t work out,” Haney said.

Although the ability to represent U.Va. may be enough reward for some, the role of Cav Man is accompanied by a scholarship for books ranging from $500 to $1,000.

While the students inside the suit remain anonymous, Haney shared their accomplishments as academics and members of the community. “We have a Cav Man [who’s] living on the Lawn,” she said. The students have been in secret societies, master’s candidates in the Frank Batten School of Leadership and Public Policy and standouts in ROTC.

For many who’ve worn the Cav Man suit, their time as a mascot ends following graduation. The Cav Men’s future careers have included military officers, comedians in New York, engineers and architects.

“There’s a bunch of different things they go on to do when they graduate,” Haney said. One former Cav Man did, however, take on a role as a mascot for the Washington Nationals, in addition to his 9-to-5 job.

While Cav Man is most famous for his role at sporting events, he also can be found at community service events and has even received invitations to birthday parties and weddings.

“We want our entire crowd involved, not just our students,” Haney said. “Everybody wants a piece of Cav Man.”

Emma Hollowell, a fourth-year student in the College of Arts & Sciences, agreed. “Cav Man is an instrumental part of game day,” she said. “He encourages us to cheer for our team and is an energetic and fun symbol of Wahoo spirit.”

Meet the New Cavalier on Horseback: She’s Eager To ‘Carry On a Legacy’ END_OF_DOCUMENT_TOKEN_TO_BE_REPLACED

Housing Changes Are a Breath of Fresh, Cool Air – Especially for Lawnies END_OF_DOCUMENT_TOKEN_TO_BE_REPLACED

Virginia Football – For All Virginia END_OF_DOCUMENT_TOKEN_TO_BE_REPLACED