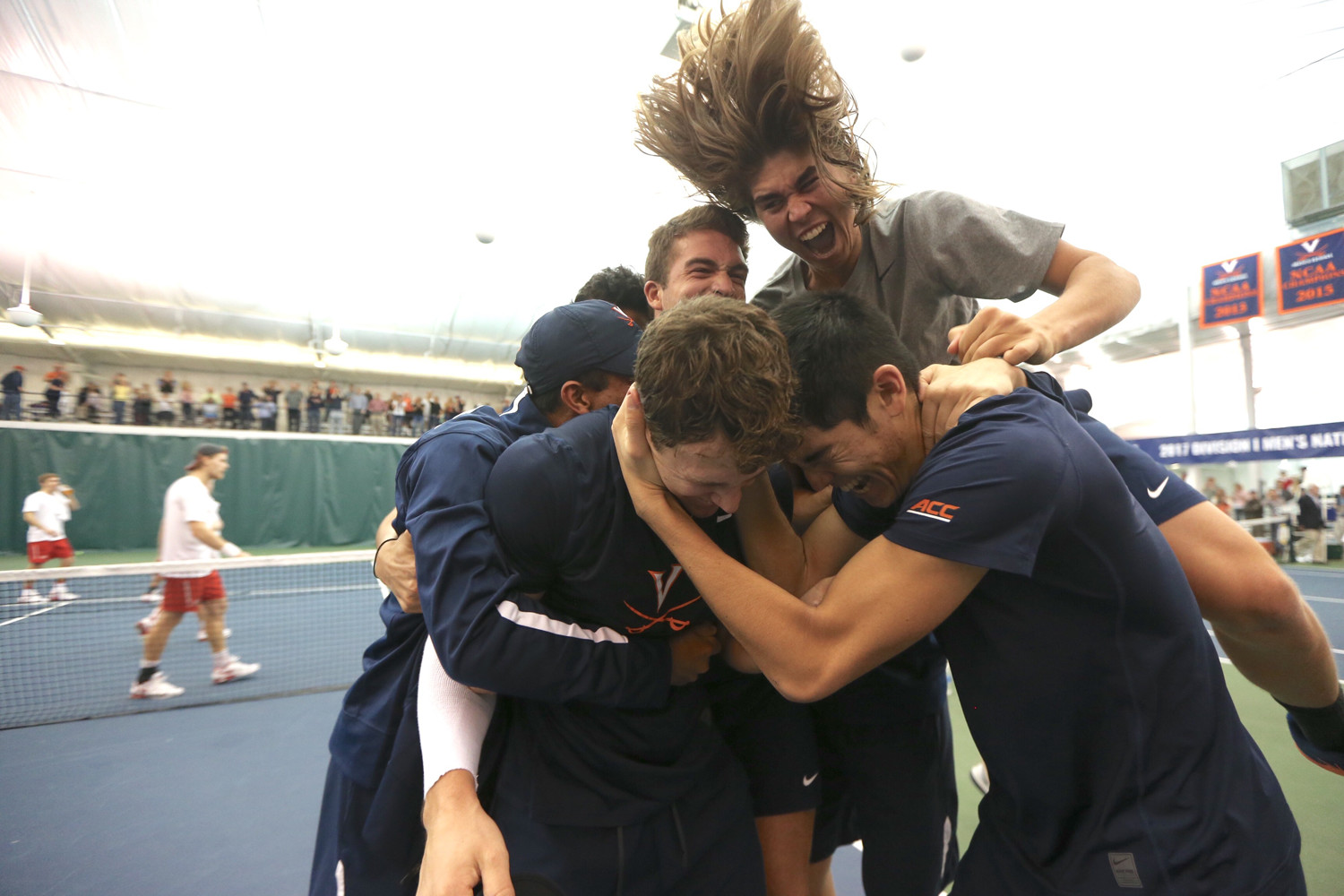 Whatever happened Monday at the Boar’s Head Sports Club, then, was not going to render a final judgment on head coach Brian Boland’s latest men’s tennis team at the University of Virginia. Still, as Boland surveyed the jubilant scene around him after top-seeded UVA’s 4-1 win over third-seeded Ohio State, he loved what he saw.

“Winning championships is fun,” Boland said. “Regardless of whether it’s ITA, ACC, NCAA, it’s just fun to have a bunch of guys work together and succeed.”

In 2016, the Cavaliers fell, 4-2, to ACC rival North Carolina in the final. They experienced no such disappointment in this year’s 16-team event.

After dropping the first set to Herkko Pollanen, Aragone won the second, 6-3. That forced a third set, which went to a tiebreaker that Aragone won, 7-4. 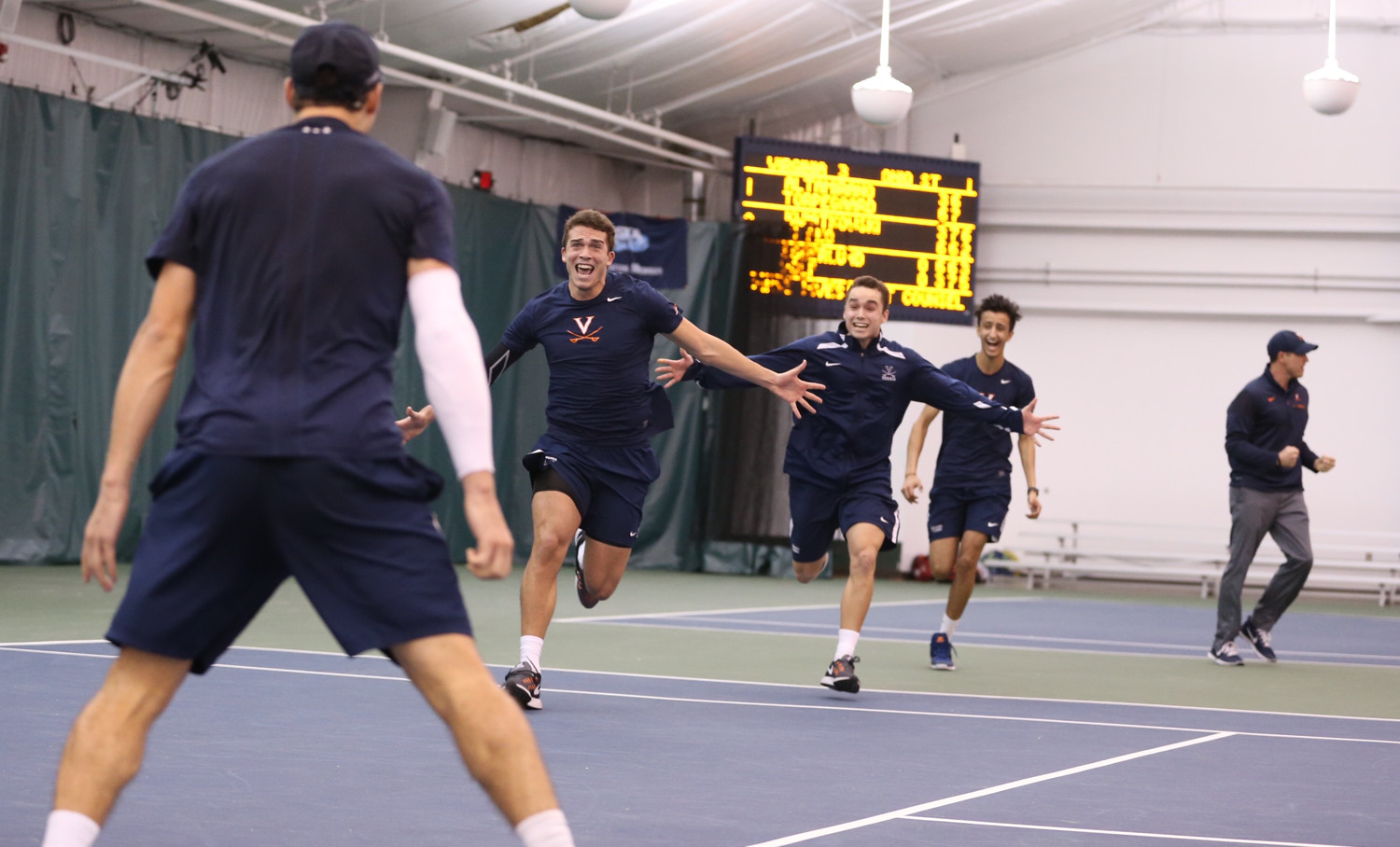 The No. 1-ranked Cavaliers gave up only one point in four team victories, over Utah State, UCLA, North Carolina and Ohio State. (Photo by Matt Riley, UVA Athletics)

The ITA Indoor title was the Cavaliers’ sixth overall, but first since 2013, when they went on to win the first of their three NCAA team crowns. That meant none of UVA’s current players had celebrated a championship in this event before Monday.

“I’m a huge fan of indoor tennis, so for me this has always been a goal,” Aragone said. “You don’t think about the previous years when you come in here. You can’t put that much pressure on yourself. We played our cards today and luckily that [last shot] went in. Who knows? Maybe tomorrow that wouldn’t have gone in.”

“There’s an extra-special satisfaction, of course, because [the current team] had never won it before,” senior Thai-Son Kwiatkowski said. “But for us, it’s big to win it at home in front of our home fans. They were unbelievable all four matches.”

After the final, Timothy Russell, chief executive officer of the ITA, called Charlottesville “one of the great tennis communities” in the United States, and Ohio State head coach Ty Tucker probably would agree with that assessment.

“Not too many times do we get to play in front of a packed house,” Tucker said in his post-match remarks.

On a day when it could have been played outdoors, so mild was the weather, the dual match started at 11 a.m.

The next match to finish was No. 2 singles, where Kwiatkowski rallied for a three-set victory. Had Kwiatkowski not won a tiebreaker in the second set, the Buckeyes might well have left Charlottesville victorious. He dominated the third set, winning 6-2.

“It’s a momentum-changer for us,” Boland said of Kwiatkowski’s victory, which pushed Virginia’s lead to 3-1.

Kwiatkowski said: “I’m in that second set just trying to win the tiebreaker to stay on the court as long as possible. I wasn’t even thinking about winning the match.”

Nos. 2, 4 and 6 singles were contested on the three top courts at the Boar’s Head. Virginia, the two-time defending NCAA champion, won each of those matches.

“I love playing next to J.C. and Henrik up top,” Kwiatkowski said. “I love the energy that’s coming through on 2, 4 and 6. It’s just so much fun to play next to these guys.”

As he headed into his third-set tiebreaker, Aragone was aware that junior Alexander Ritschard, at No. 5, and freshman Carl Soderlund, at No. 3, were locked in tight matches.

“It’s pretty tough not to, because when you hear the crowd, you look up,” Aragone said. “It’s really tough not to pay attention, but you have to do your best and kind of focus on your court.”

The third member of Virginia’s senior class, Luca Corinteli, teamed with Soderlund to win 6-0 at No. 1 singles.

“Huge days from our seniors,” Boland said. “They deserve it. These guys have done it the right way and they’ve worked hard, and they know the real work is ahead.”

The ITA title, Boland said, “gives us a lot of momentum for the rest of the season. These guys have worked very hard over the summer and fall, and it’s nice to see their hard work pay off initially. But the season’s ahead of us, and that’s what we’re after: to play our best tennis in May. But I think there are some really good indications as to some initial improvement already, so we’re really looking forward to the next half of the season.

“This team is resilient, they’re tough, and there’s a lot of work ahead of us.”