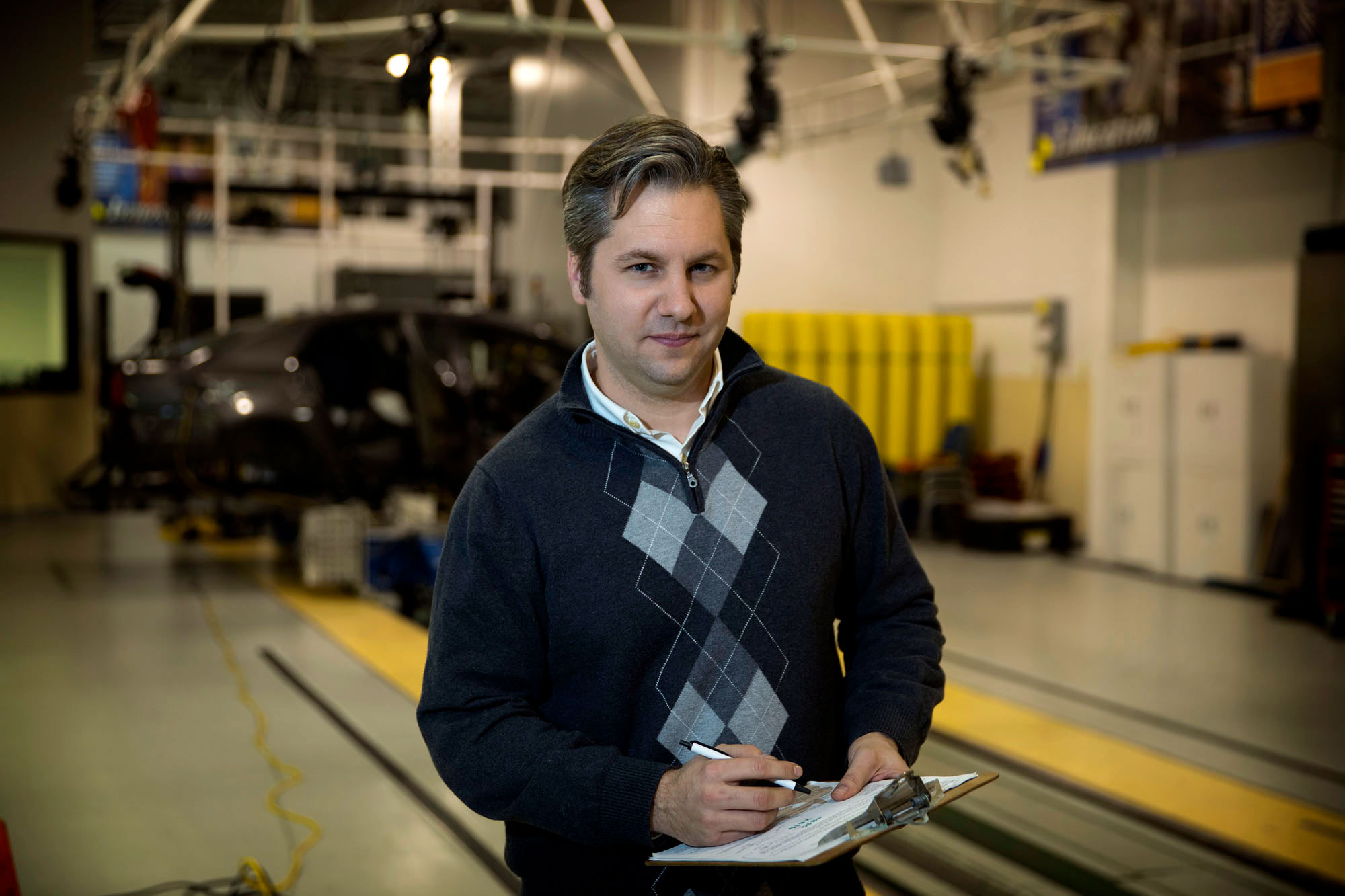 When heads collide, injury happens. Traumatic brain injuries, such as concussions and other forms of potentially permanent brain damage, happen daily in car crashes, sporting activities, fights, explosions, falls and other accidents. And while physicians and scientists understand the results of these injuries, less is known about the physiological changes that occur at the moment of impact.

Researchers in the University of Virginia’s Center for Applied Biomechanics – or “The CAB,” as its denizens call it – are looking closely at what happens to the brain under assorted impacts from different angles and intensities, using experimental and computational methods developed and refined over the years from extensive car crash tests and blast simulations.

“We are closely studying the deformation of the human brain under head motions that have been linked to concussion and more severe types of brain injury,” said Matthew Panzer, an assistant professor in the Department of Mechanical and Aerospace Engineering who specializes in developing dynamic computer models of how the brain physically responds to collisions. “We’re developing the tools to reproduce completely the physics of the brain as it’s undergoing deformation from impact.”

The models are developed from data collected from a range of physical studies at the center involving fabricated organs in sport impact simulations, automotive crashes and military blasts. Some of the work is geared toward developing new test dummies and computer simulations that accurately mimic reality.

One of the goals is to develop experimental, mathematical and computational tools to predict or assess the likelihood of head injury. These tools can be used to evaluate the effectiveness of helmets, automotive restraints or other measures designed to prevent concussion. Ultimately, researchers plan to bring brain biomechanics to the clinic, and use the predictive brain deformation models in conjunction with advanced neuroimaging for improved diagnosis for individual patients.

“We’ve developed truly unique methods for simulating and conducting impact and blast conditions and analyzing the results,” Panzer said. “We expect the work to have a significant impact on the field of traumatic brain injury and concussion.”

A young faculty member, Panzer came to UVA in 2012 as a research scientist from Duke University, where he earned his Ph.D. in biomedical engineering. He now heads the computational research group at the CAB. Some of his current work is funded by the U.S. Department of Transportation, automotive manufacturers and groups working with the Department of Defense and the National Football League.

The center is currently working with helmet-tracking technology, using camera shots from NFL games to track the motion of players’ helmets, and thereby their heads, during impacts. Using sensors built into helmets to gather impact location and intensity data with information gained by the cameras, which are positioned at different locations within the stadium, Panzer can recreate the 3-D motions of the head during a tackle to determine what is happening to the player’s brain and spine.

He has found that hits to the side of the head, causing axial rotation of the head (like making a “no” gesture), are most likely to deform the brain in ways that can cause severe injury. This kind of predictive information could help equipment engineers develop materials and designs that can better mitigate the particular forces that cause debilitating and long-term injuries on the playing field, or on the battlefield.

That knowledge also can be applied to automotive restraint systems that can best protect the head from the types of impacts that cause the most damage.

“Through this work, we are able to drive innovation for traumatic brain injury prevention through improved countermeasure designs for safety devices in sports and automobiles,” Panzer said.

Meet the New Cavalier on Horseback: She’s Eager To ‘Carry On a Legacy’ END_OF_DOCUMENT_TOKEN_TO_BE_REPLACED

Monkeypox Is Spreading, But University’s Risk Believed To Be Low END_OF_DOCUMENT_TOKEN_TO_BE_REPLACED

Virginia Football – For All Virginia END_OF_DOCUMENT_TOKEN_TO_BE_REPLACED