Churchill Scholar’s Path to the Universe Runs Through Cambridge 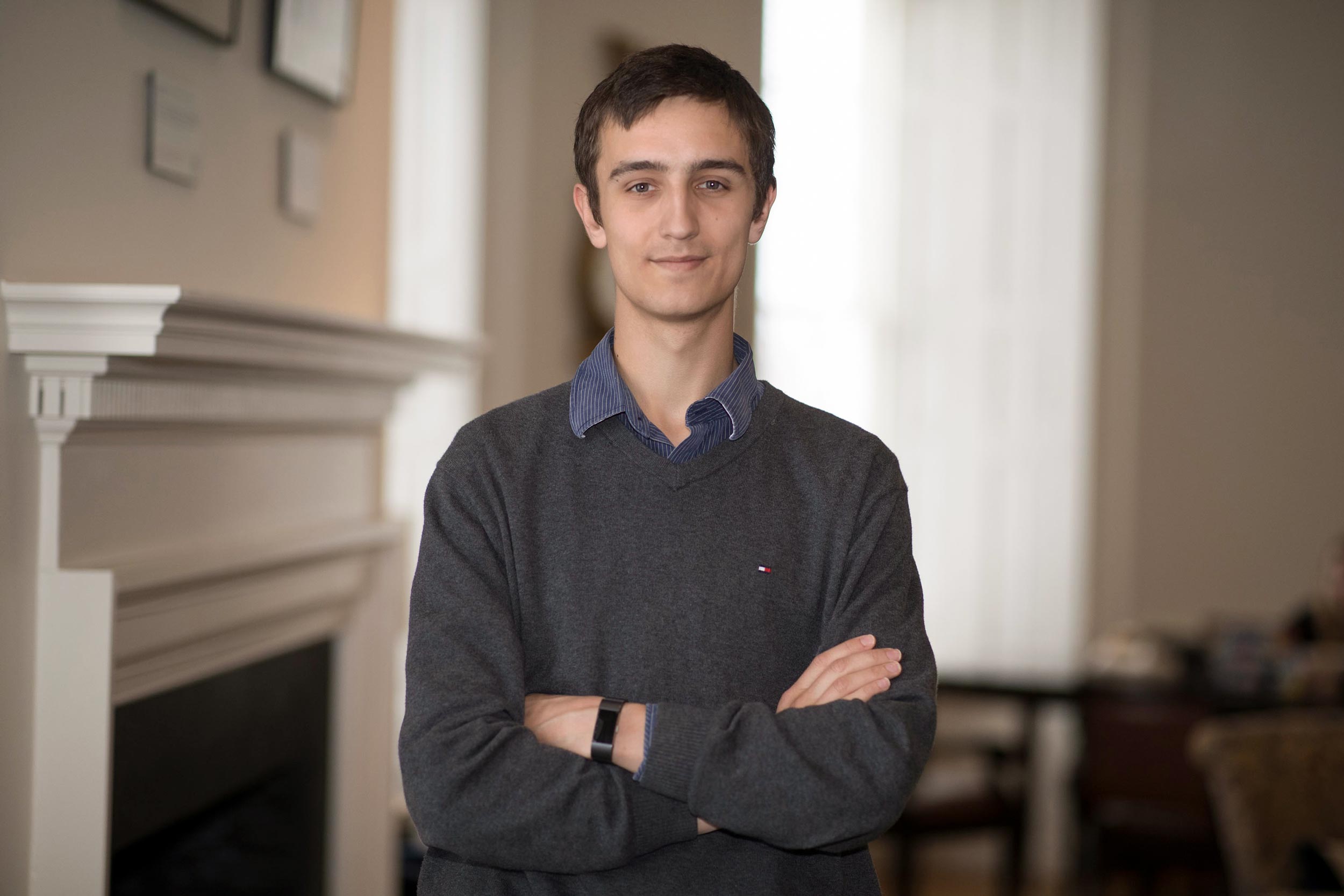 Brian Seymour will earn his degree in physics and mathematics in May and plans to continue studying gravitational physics at Cambridge in the fall. (Photo by Dan Addison, University Communications)

Brian Seymour explores the universe, its black holes and pulsars. Now he can go further with the help of a Churchill Scholarship.

Seymour is one of 15 recipients of Churchill Scholarships, valued at roughly $60,000 apiece, which fund American students’ pursuit of a master’s degree at the University of Cambridge. The program was set up at the request of Sir Winston Churchill, the British prime minister during World War II, in order to fulfill his vision of a U.S.-U.K. exchange advancing science and technology on both sides of the Atlantic and helping ensure future prosperity and security.

Seymour, a Greene County resident, focuses his research on gravity and cosmology.

“Gravitational physics focuses on studying the movement and properties of very heavy objects like black holes and neutron stars,” he said. “Cosmology focuses on the origin and evolution of the universe at a large scale – from the ‘Big Bang’ to today to the infinite future.”

Seymour said curiosity drew him to the physics of the universe.

“I became fascinated by physics when I learned that ordinary matter is only 5 percent of the universe,” he said. “We know the other 95 percent exists, but know little else.”

Seymour published a paper with Kent Yagi, an assistant professor in theoretical astrophysics, gravity and cosmology in UVA’s Department of Physics, testing the theories of gravity.

In particular, Seymour is probing Einstein’s Theory of General Relativity with astrophysical compact binaries, which consist of one black hole and one pulsar, that are expected to be discovered in the near future. Black holes and pulsars (or neutron stars) are both very compact astrophysical objects formed after the death of massive stars. According to Einstein’s Theory of General Relativity, any object curves the spacetime around it and this curvature of spacetime is felt as gravity.

“So far, general relativity has passed all the tests with flying colors,” Yagi said. “Having said this, we know that general relativity has to be modified to establish the ‘theory of everything,’ as it does not go along well with quantum mechanics. Brian and I revealed that if a black hole-pulsar binary is found in the future, we will be able to perform more accurate tests of gravity. If a deviation away from general relativity is found, this will give a huge impact to the physics community and may give insight into how to unify all the four known forces in physics to establish the ‘theory of everything.’”

“He is an exceptional and highly motivated student,” Yagi said. “He is diligent and is a crucial member of my research group. Brian is extremely enthusiastic in learning gravitational physics. He truly enjoys conducting research on gravity, and I feel very lucky that I have such a wonderful student who is tremendously fun to work with.”

“In addition to his excellence in research, to which his faculty readily attest, I would like to add that this is not the first fellowship that Brian has pursued,” said Andrus G. Ashoo, director of UVA’s Office of Citizen Scholar Development. “I appreciate that Brian is willing to take the risks and put himself out there time and again, and I am impressed by how he uses every experience as a learning opportunity.”

Seymour is a member of the Society of Physics Students, the Sigma Pi Sigma Physics Honor Society and the College Science Scholars.

A home-schooled student before coming to UVA, Seymour plans to pursue a Ph.D. in physics after completing the Master of Advanced Studies at Cambridge in the Department of Applied Mathematics and Theoretical Physics.

“My goal is to become a professor at a research university,” Seymour said. “At the end of my career, I wish to write a popular science book that serves as a scalable way of doing physics outreach.”

Ashoo thinks Seymour could inspire other students to pursue scholarships such as the Churchill.

“This is a fantastic opportunity for the student who simply loves science and has committed to research as an undergraduate, but we do not have enough University of Virginia students applying,” Ashoo said. “A fully funded research opportunity at one of the best STEM institutions in the world seems like a great way to spend a year before graduate school.”

When Less Is More: How Harnessing the Power of Subtraction Can Add to Life END_OF_DOCUMENT_TOKEN_TO_BE_REPLACED