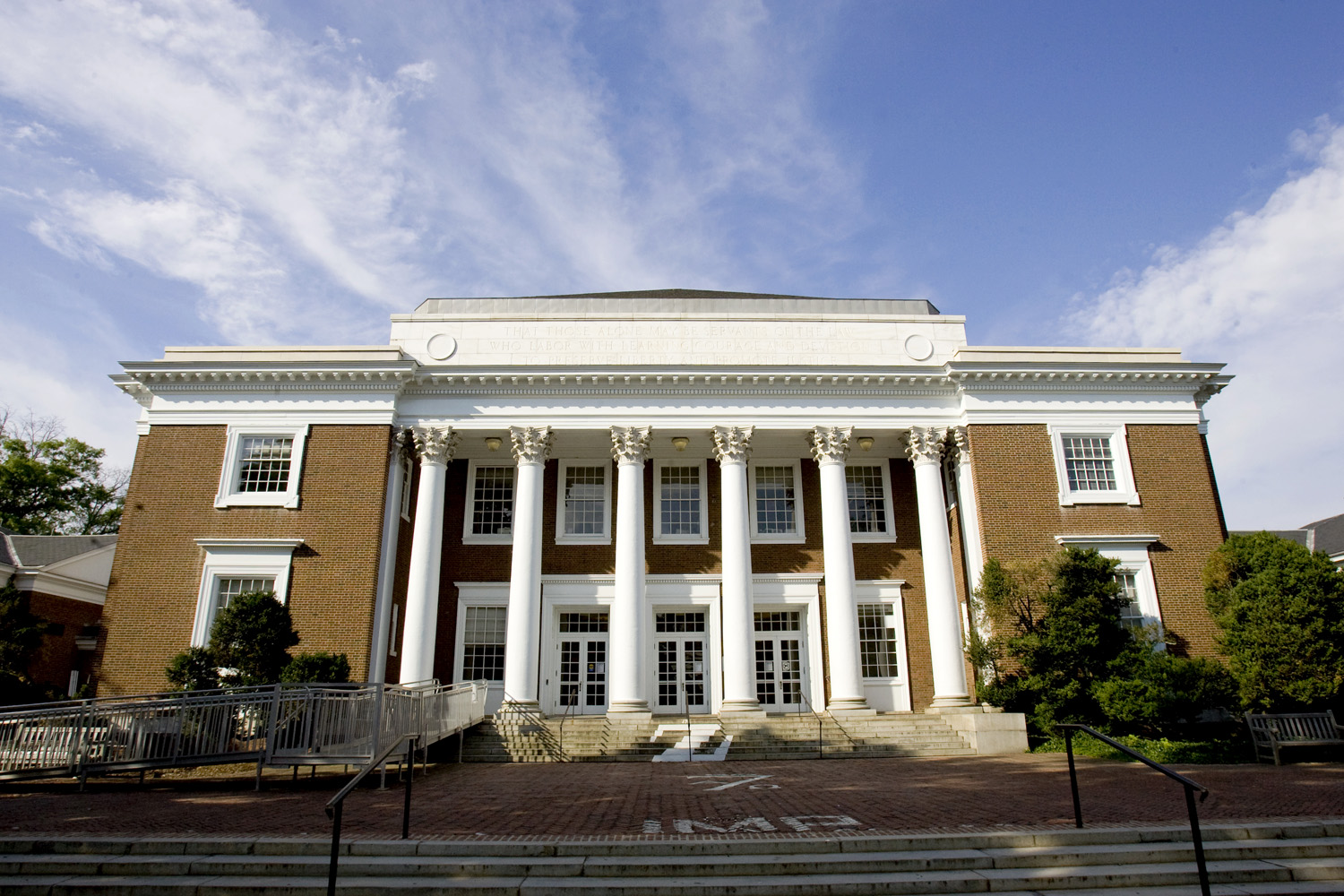 July 10, 2008 -- In the early part of the 20th century, of benefactor William A. Clark Jr. thought a new home for the would be a fitting memorial to his wife.

He was right, according to Garth Anderson, manager of the at Facilities Management. "Clark Hall has always been enjoyed as a wonderful building." And this June, 76 years after its dedication, Clark Hall, built in memory of 's first wife, Mabel Duffield Foster Clark, is getting another nod of approval. It has been added to 's Landmarks Registry.

Every year, buildings are nominated for the register, said Brian E. Hogg, senior preservation planner at the University Architect's office, which nominated Clark Hall. This is the first step toward greater recognition.

"You have to reach this level before you can be put on the National Register of Historic Places," noted.

The first law class was held in Pavilion III in 1826, the moved into the Rotunda Annex in 1853 and then moved into its own home in Minor Hall in 1911.

Clark Hall was built with a $350,000 donation from William A. Clark Jr., a member of the Law School's class of 1899 and friend of then-University President Edwin A. Alderman and Law School Dean William Minor Lile. Clark, who maintained family business interests in Montana and California, built Clark Hall in honor of his first wife, Mabel, who died in 1903 shortly after giving birth to their only child, William Andrews Clark III.

Clark Hall was designed by a committee: the Architectural Commission, four architects with close ties to the University.

"They did the actual design and oversaw the construction," said.

"Each had contributed to the Grounds," said of the commission. "This was the best way to get good architectural guidance."

But the design process was not smooth, in part because there were many visions of what Clark Hall would be. It had to contain academic space, a law library and a mural hall with a memorial dedication.

"And it had to have the atmosphere and the presence of a courthouse," said. "That is a tricky combination of things to come together."

"He wanted something more monumental," said. "It was a long process, with a lot of designs and schemes."

The designers had selected a small bluff on what was then

Observatory Road
(now ) as the best spot for the hall. To accommodate the building there, the house provided to music professor Arthur Fickenscher, the founding faculty member in the McIntire Department of Music, was demolished, as was at least one of the buildings of Dawson's Row, which was student housing at the time.

While the outside resembled a courthouse, the interior contained an extravagant luxury — a large open hall with art.  The mural room, which connected the front lobby to the law library, is considered an outstanding feature of the building. There are two three-panel murals on either side of the sky-lit hall. One painting depicts Moses presenting the Ten Commandments to the Israelites, representing the moral law. On the other side, representing the civil law, is a depiction of the trail featured in drawings on Achilles' shield in the Iliad. had commissioned Allyn Cox, son of prominent mural painter Kenyon Cox, to paint the panels. Clark had been Cox's patron in earlier ventures, including a mural at the American Veterans of Foreign Wars Hall in .

Apart from the mural panels, Cox painted the dedication on the wall over the library entrance. "This building was erected by Williams Andrews Clark Jr., LLB class of 1899, in loving memory of his wife, Mabel Foster Clark, 1880-1903, and is dedicated to the faculty, alumni and students of the , , 1932." The plaque appears to be held aloft by two females, Dike, representing law and order, and her sister Eunomia, representing the moral law, painted by Cox in grisaille, to appear to be three-dimensional sculpture.

"The mural room is really one of the finest interiors of any building in the commonwealth," said Hogg.

The murals took a long time and they were not ready at the time of the dedication. The designs had to be approved by the Art and Architecture Commission in , which reviewed art for public buildings. Cox presented cartoon figures of what he was designing.  The images were painted on panels that were hung in place in the hall, with the panels separated by pilasters.

"There was a process that it had to go through," said . "But was the dean of the and Architecture at U.Va. and a member of the state Art and Architecture Commission. He was commenting on it and shepherding it through."

The building was dedicated in 1932. Alderman died in 1931 before it was completed. Lile was ill and retired before the dedication. While was at the ceremony, he was still mourning his son, who had died in a plane crash a few months earlier. died in June 1934, before the murals were put in place later that year.

There were two additions to Clark Hall while it was still the , one in 1949 and the other in 1962. The moved to the North Grounds in 1975 at which time the building became home to the Department of Environmental Sciences. A large addition to the back of the building, which included the Charles L. Brown Science and Engineering Library, was completed in 2003.

Do You Know the History of Your Favorite Corner Spots? END_OF_DOCUMENT_TOKEN_TO_BE_REPLACED

Netflix to Add Ads. Why This Could Be a ‘Game-Changer’ for Your Viewing Experience END_OF_DOCUMENT_TOKEN_TO_BE_REPLACED

What’s Next for UVA’s Class of 2022? END_OF_DOCUMENT_TOKEN_TO_BE_REPLACED