Class of 2010 Gift Is the Second Largest Ever 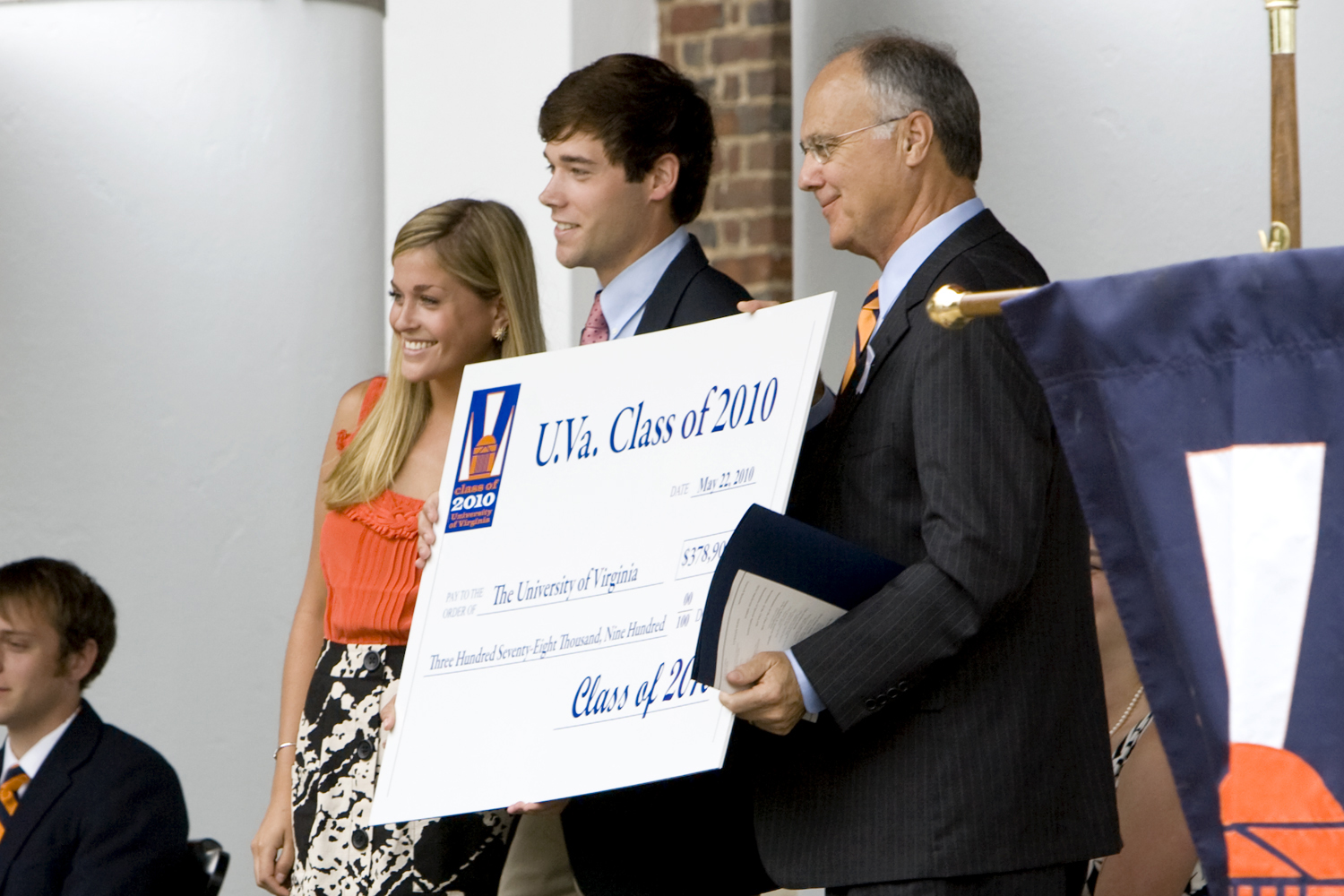 May 22, 2010 — The gift of $378,900 from the University of Virginia's class of 2010 represents the second largest gift ever and, at 57 percent, one of the highest rates of participation, Matt Schrimper, co-chair of the class giving committee.

He and co-chair Katie Peabody presented the gift to U.Va. President John T. Casteen today at Valedictory Exercises on the Lawn. Casteen said the gift was also the broadest-reaching he had seen since the tradition began in 1997, with students donating to 170 programs.

Among the beneficiaries are Madison House, the student-run volunteer organization; AccessUVa, the University's financial aid program; the Office of African-American Affairs; the Women's Center; the U.Va. Art Museum; and all six undergraduate schools.

"I hope it starts a habit for you," Casteen said. "I won't be here to write a thank you note, but someone will." He will step down as U.Va. president on Aug. 1, at the conclusion of his 20th year. Teresa A. Sullivan, who is attending Finals Week festivities, will become the University's eighth president.

Class of 2010 trustees also presented a series of awards:

Jerome Meyinesse, a forward on the men's basketball team, received the Louis A. Onesty Memorial Scholar-Athlete Award for excellence in academics and athletics. Meyinesse, one of three team captains, played in all 31 games of the 2009-2010 campaign, achieving career highs in points scored, rebounds and minutes played. An economics major in the College of Arts & Sciences, he received the 2010 Skip Prosser Award as the top men's basketball scholar-athlete in the ACC and was named for the third time to the ACC All-Academic Team. "He's strong in mind, body and heart," said presenter Poorna Phaltankar, a class trustee.

The Black Student Alliance received the James Earle Sargeant Award, given annually to a student organization that makes major contributions to the University community. The alliance not only established programs to welcome and support African-American students who come to U.Va., said presenter Brittany Moore. It also hosted more than 40 events to make sure that every African-American student knew of available resources and hosted an Emerging Leaders Retreat. It was named CIO of the year. Lauren Boswell, 2009-2010 president and architecture major, accepted the award.

The class award for community service went to religious studies and biology major Garrett Trent, student affairs director of the Hope Community Center in Charlottesville. He envisioned, organized and launched Meet Your Neighbor, which brings together members of the Charlottesville and University communities; Street Soccer UVA, which engages homeless individuals in a team sport, and Hope Cooks!, a catering business.

Kaity Yang (College) received the cultural fluency award, which has been given since 1996. She began volunteering at the Center for American English Language and Culture as a first-year student and became an undergraduate intern this past year. Three study-abroad courses took her to Shanghai, London and Delhi. She also initiated student efforts to restore the minor in Spanish.

The unsung hero award went to Nacem Ahmad, an aerospace and mechanical engineering major in the School of Engineering and Applied Science. The nomination letter described him as "intelligent and gracious, and he works overtime to make sure his peers understand the classwork." He tutored several students each week and was a teaching assistant in an advanced engineering class. On weekends, the letter said, he would travel home to Culpeper and a job at a video store to pay his rent in Charlottesville.

The Gordon F. Rainey Jr. Award for Vigilance to the Student Experience was given by the Society of the Purple Shadows to Robert P. Green, a 1969 alumnus, who led a $1.5 million capital campaign to expand and maintain the chapter house of his fraternity, Delta Kappa Epsilon. Green retired to Charlottesville in the late '80s after many years as a cotton grower in Georgia. He works as a real estate agent.

In Memoriam: Life of Drama Professor To Be Honored Sunday END_OF_DOCUMENT_TOKEN_TO_BE_REPLACED