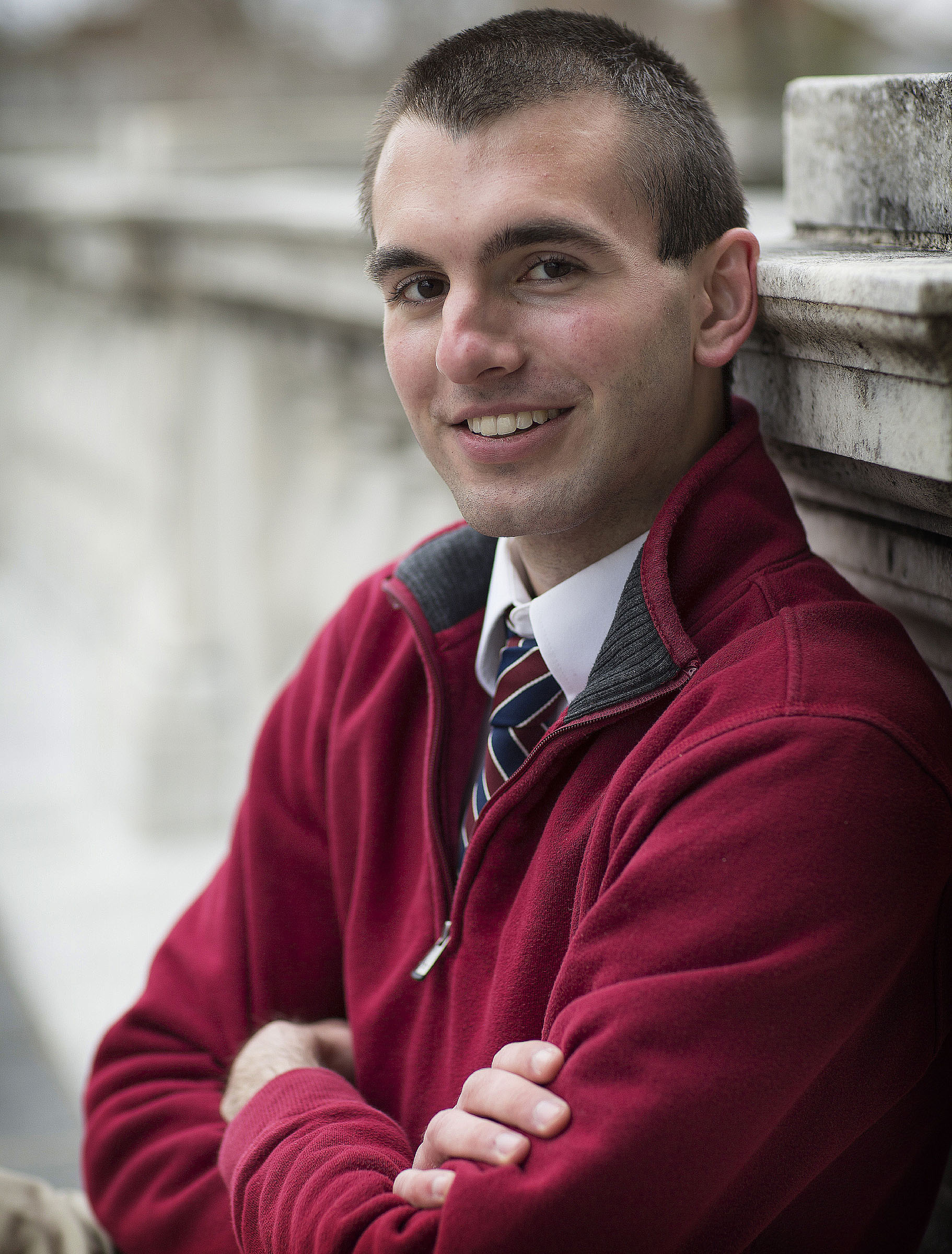 Each entering class at the University of Virginia seems to surpass the qualifications of the previous one, so it comes as little surprise that four years later, they graduate with a host of academic awards and honors.

Given to a select group of students nationwide who are pursuing careers in mathematics, science and engineering, the Barry M. Goldwater Scholarships both went to students graduating from the School of Engineering and Applied Science. Ellen D. Zhong, of Vienna, is a chemical engineering major; Davis Blalock, of Charlottesville, is an electrical and computer engineering major who also has completed the requirements for a cognitive science major in the College of Arts & Sciences.

The one- and two-year scholarships provide up to $7,500 a year to help cover the cost of tuition, fees, books, and room and board.

“I’ve worked primarily on creating an affordable, hand-held ultrasound device alongside researchers at PocketSonics Inc.,” Blalock said, referring to a U.Va. startup company founded by three U.Va. professors, including his father, Travis Blalock, an associate professor in the Department of Electrical and Computer Engineering. “We’re using a completely new way of producing ultrasound images that lets us create a visual window right into your skin.”

Zhong’s research involves using computer simulation to probe why proteins can become unstable and lose their characteristic shape and function during chromatography, a fundamental lab technique used in drug development.

“I am writing my own simulation program especially designed for rapid, efficient simulation of proteins on surfaces, which will hopefully become a useful tool for many researchers,” Zhong said. “Hopefully, my work will be able to improve chromatographic processes and the design of chromatographic surfaces, help elucidate some of the fundamental interactions not directly examinable through experiment and aid in the design of stable, pharmaceutically relevant proteins.”

Zhong was a Rodman Scholar, a member of the Raven Society and associate editor-in-chief of Spectra, the Undergraduate Research Journal. She received an Astronaut Scholarship, a Thomson Scholarship (awarded for academic excellence from the chemical engineering department), a MacAvoy Scholarship for private music lessons and a Harrison Undergraduate Research Award. She was an executive council member of the American Institute of Chemical Engineers and president of the local ChemE Car team. She was also active in the Kinnier Project, a high school outreach program centered around engineering.

She plans to pursue a Ph.D. in chemical engineering. “I hope to become a leading specialist in my field of expertise and pioneer cutting-edge research at a university or research institute after completing my Ph.D.,” she said. “I am particularly interested in molecular simulation of complex biomolecules, which can improve drug design and aid in curing protein-related diseases.”

The Beckman Scholarships are awarded to students pursuing chemistry, biochemistry and biological and medical sciences. Among this year’s graduates are Tristan Jones, of Reston, a biomedical engineering major specializing in cardiovascular system biology in the School of Engineering and Applied Science, and Anna Brosnahan, of Arlington, a chemistry major in the College of Arts & Sciences.

Each undergraduate researcher receives $19,300 in salary and travel for two summers and one academic year.

“I aim to optimize the conversion of scar tissue into functional muscle cells through the addition of transcription factors,” he said. “I chose this topic because it is a very new and exciting technique that has a good chance of becoming therapeutically useful someday.”

Jones was treasurer of the Rodman Council and The Spectra undergraduate engineering research journal, a medical services volunteer at Madison House and a Lawn resident. He received a Harrison Undergraduate Research Award in 2013 for his cardiac research. A graduate of the Thomas Jefferson High School for Science and Technology, he plans to pursue a medical degree.

Brosnahan, whose work focused on organometallic chemistry, researched new catalysts to produce alkyl or vinyl arenes, about which 60 billion pounds per annum are used as precursors to products including fuels, plastics and detergents. She is working on methods that may reduce the environmental impact, energy consumption and expenses of their manufacturing process, compared to current processes.

Brosnahan was a volunteer at Madison House and a member of the College Science Scholars. A graduate of Washington-Lee High School, she plans to pursue a Ph.D. in chemistry.

Evan Behrle and Charles Tyson are the University’s 49th and 50th Rhodes Scholars. The awards, valued at between $50,000 to $175,000, fully fund two or three years of study at the University of Oxford in England.

Behrle, an honors politics major in the College, plans to pursue a master’s of philosophy in comparative social policy at Oxford, with an eye on working on urban revitalization projects.

Tyson, majoring in political and social thought and English in the College, will pursue two one-year master’s programs – one in Victorian literature and another in history of science – after which he plans to return come back to the U.S. to pursue a Ph.D. in English literature.

The two students are planning divergent futures. While Tyson plans to pursue a more academic life, Behrle is seeking a synthesis of disciplines to pursue holistic solutions to what he views as fundamental failures of contemporary society.

“I don’t think pure public policy was enough, but I am nonetheless interested in working to formulate policy for a city government,” Behrle said. Specifically, he would like to help cities, including his native Baltimore, “continue their shift toward treatment and away from incarceration for issues of drug abuse and addiction.”

“You could maybe think of it like a public policy degree that is simply wider in scope,” Behrle said. “I would be particularly interested in examining how, and how successfully, different states have reckoned with poverty and social exclusion in post-industrial urban spaces.”

Tyson views the Rhodes as a “life-changing event” for him, with the opportunity to live abroad, meet new people and face new challenges.

“My dream is to be a writer and a professor,” he said. “As a product of public schools, I hope to work at a state institution. I’m inspired by the powerful impact a liberal arts education can have on a person.

“I’m a case in point: the time I’ve spent at U.Va. learning from books, professors and fellow students has changed my life indelibly, and for the better. I would love to have the chance to mentor and teach students, to cultivate their talents, and to write about serious ideas in a way that general readers can understand.”

Behrle was an Echols Scholar and a Jefferson Scholar, chaired the University’s Honor Committee and is president of One in Four, an all-male sexual assault peer education group. He was also vice president and recruitment chair of Phi Delta Theta fraternity and a member of the University Guide Service and the Raven Society. He was a summer orientation leader, a site leader for Alternative Spring Break and a recipient of the Gray-Carrington Memorial Scholarship Award.

Tyson, of Chapel Hill, North Carolina, was a Robert Kent Gooch Scholar and an Echols Scholar. He received Intermediate Honors and is a Lawn resident. He is a member of the Raven Society and was elected to Phi Beta Kappa as a junior. He also received the Wagenheim and Pruden scholarships, which are nominated and awarded by the faculty of the Department of English. Tyson was also executive editor of The Cavalier Daily, the independent student newspaper, where he wrote editorials and edited opinion and editorial content.

Tyson was on the undergraduate advisory board of the Institute of the Humanities & Global Cultures and has served as a senior resident and resident adviser in first-year dorms, and as a summer orientation leader.

As a third-year student, Tyson received a Beinecke Scholarship, intended to provide substantial support for the graduate education of highly motivated students in the arts, humanities and social sciences. He was one of 20 winners from across the country to receive the prestigious scholarship, which will provide $34,000 toward his graduate education.

Carolyn Pelnik, who received a degree last year in engineering science and public policy from the Engineering School, is graduating this year with a Master of Public Policy degree from the Frank Batten School of Leadership and Public Policy. The Richmond native is also a recipient of a Davis Prize for Peace, which funds student projects that advance peace and understanding around the world.

Pelnik’s project, executed in collaboration with fellow Engineering School graduate Lacey Williams, was a partnership with the Jifundishe Free Library in Ngongongare, Tanzania and Global Grassroots, a nongovernmental organization founded by U.Va. alumna Gretchen Steidle Wallace. Their plan was designed to increase women’s empowerment through agricultural and business education and microlending.

Pelnik was a Jefferson Scholar, a Rodman Scholar and a participant in the Jefferson Public Citizens program. She also received a 2011 Harrison Undergraduate Research Award.

A graduate of Henrico High School, Pelnik plans to pursue a career in natural resource management.

“I am excited to gain experience working abroad in a resource management capacity, particularly in a developing community where efficient resource allocation is essential to sustainable development,” she said.

A Year We Will Never Forget: 2019-20 in Review END_OF_DOCUMENT_TOKEN_TO_BE_REPLACED

‘What Will You Carry With You?’ Remarks From UVA President Jim Ryan END_OF_DOCUMENT_TOKEN_TO_BE_REPLACED