From U.Va. to Oxford: The Intertwining Paths of Two Rhodes Scholars 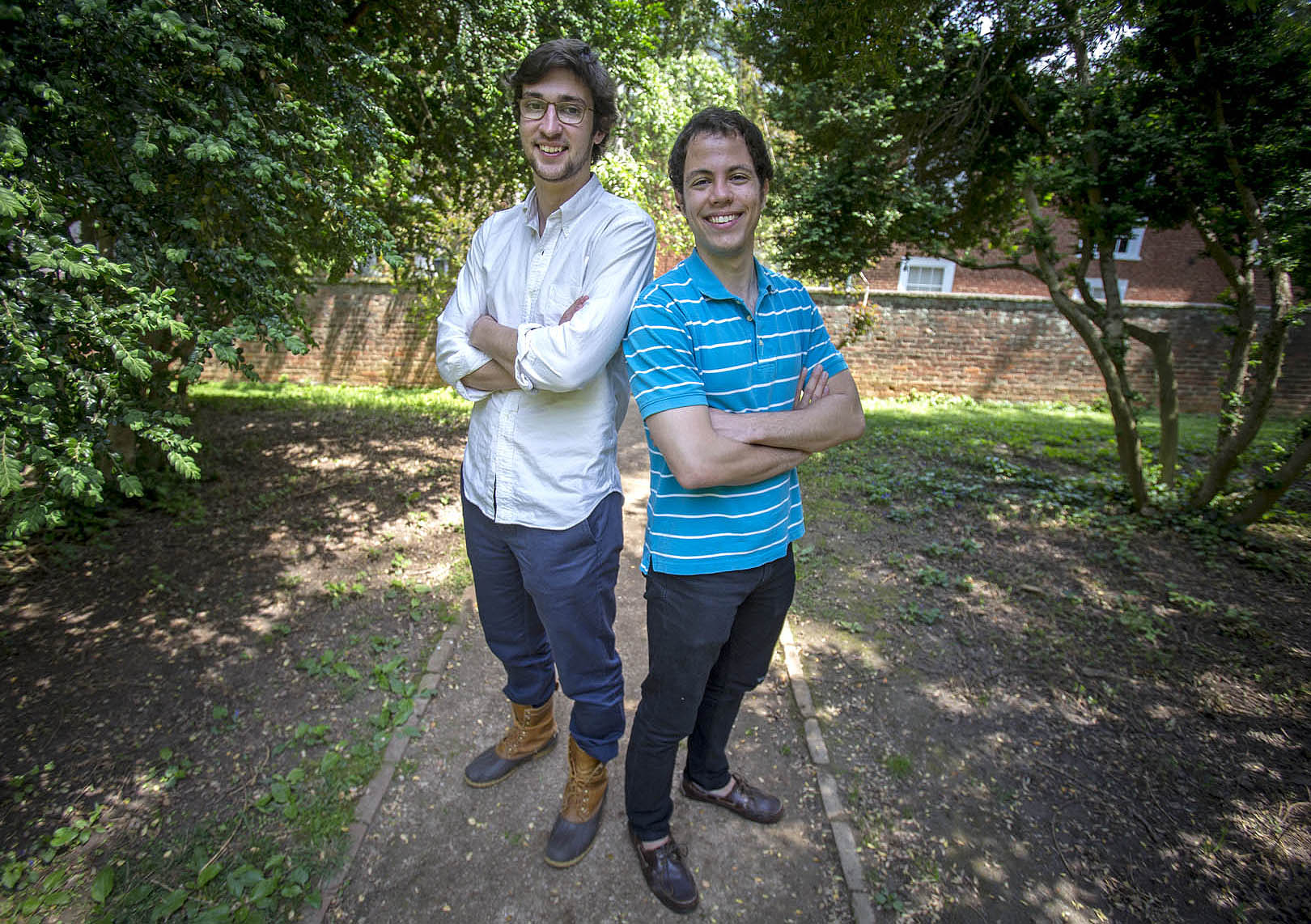 Final Exercises at the University of Virginia mark the end of many things for students: classes, exams and even friendships.

One friendship that will not end is that between fourth-years Evan Behrle and Charles Tyson, both of whom received 2014 Rhodes Scholarships.

Tyson and Behrle come from different backgrounds. Tyson, the youngest triplet from Chapel Hill, North Carolina, has found company in books since childhood. Behrle, from Baltimore, was first raised by his single mother, then moved in with his brother, who is in a glamrock band, to be closer to his school.

The two met as U.Va. first-year students in a Tibetan Buddhism course, then unaware that their budding friendship would remain intertwined for at least the next six years.

As the two advanced in their academic careers, they met again when Tyson joined Behrle as an Echols Scholar at the end of his first year.

Behrle and Tyson continued along their academic paths, as their experiences at U.Va. slowly shaped them into potential Rhodes Scholars.

Each found homes in intimate academic settings: Behrle, also a Jefferson Scholar, was accepted into honors politics, a program within the Woodrow Wilson Department of Politics that is capped at seven students annually, and Tyson landed in an 18-student major, political and social thought, with a second major in English on the side.

“We both benefitted from small honors programs within the College,” Tyson said. “I know I wouldn’t have received a Rhodes Scholarship if I hadn’t had faculty elevating me along the way. That’s not true at every school. Not every school prizes undergraduate education the way U.Va. does.”

Similarly, both out-of-state students found supportive communities in extracurricular experiences; Behrle with the Honor Committee, which he now chairs, and in his fraternity, and Tyson with the Cavalier Daily, U.Va.’s independent student paper.

The separate experiences shaped the two as students and individuals.

“[At the Cavalier Daily] we have great conversations both about our coverage of University and Charlottesville life, and also about media ethics, law and politics. Those discussions were a huge part of my education here,” Tyson said.

Behrle shared similar big-question experiences with the Honor Committee’s executive committee. As a student, he cherished being a part of the honor system that gives students responsibility and holds each student accountable.

As they began their final year at the University, they became neighbors on the Lawn, an honor bestowed upon leading fourth-year students for their achievements at U.Va.

As honor chair, Behrle was assigned Lawn room 37 West. Tyson selected 18 East, which he considered to be a lucky room. It was formerly home to Hilary Hurd, a 2013 graduate selected as a Marshall Scholar, and was also the room Nelson lived in when she won the Rhodes.

As October’s Rhodes Scholarship application deadline approached, still neither knew the intertwined fate that their friendship held as both humbly doubted their chance of being chosen.

“It’s hard to work up the courage to apply for a Rhodes Scholarship,” Tyson said. “One thing that was vital was that I had professors and friends who encouraged me to apply. It made me feel as if I had people behind me who believed in me.”

As Tyson considered applying, he recalled a quote from German poet, philosopher, historian and playwright Fredrick Schiller, “Stay true to the dreams of thy youth.” He believed his book-loving 10-year-old self would be happy with the path that could be made possible by the Rhodes Scholarship.

“When I was a kid, I wanted to be a writer so badly,” he said. “I never strayed from that dream. I think if I had compromised on that, then I don’t know if I would have gotten the scholarship.”

Likewise, Behrle was hesitant as he considered his chances.

“I wasn’t even going to apply until I was strong-armed by [2013] Rhodes Scholar Joe Riley and [former] honor chair Steven Nash,” he said. “I thought that there was a caliber of students that was competitive for a Rhodes Scholarship and then there was everyone else.” Behrle said he counted himself to be in the latter group.

In December, when Behrle and Tyson were announced as the University’s 49th and 50th Rhodes Scholars, each looked to the other with admiration. Tyson joked to Berhle, “You’re not the president, at least not yet.” Berhle admits that he gets good grades, but said he’s not “freaky brilliant” like Tyson.

Between the two, they have accumulated 10 leadership positions within the University, adopted the title of “scholar” five times over, are both members of the Raven Society, have received an award from the Virginia Press Association, been offered a Marshall Scholarship and recently completed their honors theses.

“Evan is an exemplary representative of U.Va., cares deeply about our community, and has worked tirelessly to implement meaningful initiatives,” said Katherine V. Walters, director of national scholarship and fellowship opportunities for the Center for Undergraduate Excellence. “He’s bound to create positive change at Oxford and beyond. It has been an absolute pleasure to work with him this past year.”

“Charlie Tyson is among the most impressive students I have encountered in my 22 years at the University of Virginia, and I have encountered quite a few, many of them connected with [political and social thought],” said Allan Megill, a professor in the Corcoran Department of History who taught Tyson in the Political and Social Thought program. “I am hard-pressed to think of any of my other students who exceed him, and there are few who equal him.”

As the two enter their final days at U.Va., it is clear they have each left a lasting legacy.

“I definitely don’t want to be remembered as the guy who won a Rhodes Scholarship,” Tyson said. “In fact, I question whether I want to have a legacy. It’s been said that the dead hand of the past constrains the future. I would be fine being forgotten.”

The two would rather be remembered as members of groups who made changes within U.Va.

As President Obama once said in The Atlantic, “We’re part of a long-running story. We just try to get our paragraph right.” Behrle said he hopes his paragraph was written during his term as Honor Committee chair, when the honor system underwent the largest structural change in decades.

“I hope the legacy can be that we wrote the paragraph coming from this huge change in the honor system, moving to a structural fix. I hope we wrote the intervening paragraph, acknowledging that things really weren’t working well,” he said.

For Tyson, the hope is that his time at the Cavalier Daily impacted the University. During the June 2012 resignation and subsequent reinstatement of President Teresa A. Sullivan, Tyson was the first journalist to request the public records that fueled much of the media coverage of the events.

As the two pass the torch to a new generation of students, they expressed their hope for the next paragraph in the University’s history.

“I think its important to protect those things which make us distinctive as a University and carry them forward, while sharing them with a wider array of students,” Behrle said.

Tyson added, “I want the University to one day be the unequivocally best public institution in the United States. Being the best means having the best faculty, having a strong commitment toward undergraduate teaching and producing excellent undergraduate research. I also think a greater degree of racial and socioeconomic diversity would tremendously enhance residential education at U.Va.”

As their paths prepare to converge again in England, they both expect adventure from their two- or three-year stays at Oxford, which are valued between $50,00 to $175,000.

“I’m really excited to engage in a lot of conversations,” Behrle said. “Each scholar is bringing in their incredible passions and I want to hear about them.”

Tyson, who admits to having only received a passport last year, says he is most excited about meeting non-Americans. “I think that studying in a foreign country is invaluable,” he said.

“The Rhodes is such a gift. It’s a gift that allows you to pursue your dreams and to follow your passions,” Tyson said.

A Year We Will Never Forget: 2019-20 in Review END_OF_DOCUMENT_TOKEN_TO_BE_REPLACED

‘What Will You Carry With You?’ Remarks From UVA President Jim Ryan END_OF_DOCUMENT_TOKEN_TO_BE_REPLACED