Class of 2015: Grad Relishes Grand Tour of Monticello, U.Va. and the Humanities 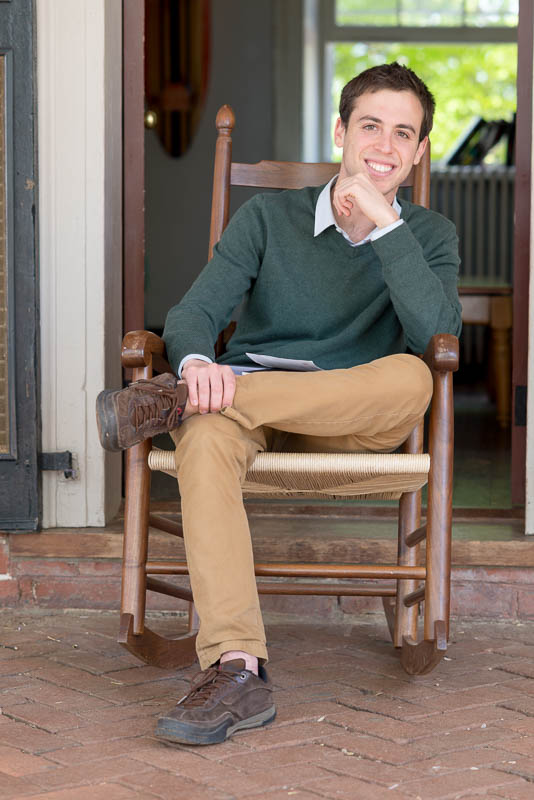 Aaron Ojalvo delved into all things Jefferson during his time at the University, and fittingly earned a room on the Lawn, part of Jefferson&amp;rsquo;s original Academical Village, for his fourth year.

As a high school senior touring the University of Virginia for the first time, Aaron Ojalvo had a revelation.

He was carrying a copy of Mary Shelley’s “Frankenstein,” which he was reading at the time. Five different people – perfect strangers – stopped him to talk about Shelley’s classic novel.

“That kind of academic environment just blew my mind,” Ojalvo said. “It was just this wonderful literary exchange between casual strangers.

Almost four years later, Ojalvo was sitting in a rocking chair in front of his room on the Lawn absorbing the autumnal beauty of the Academical Village. Changing seasons were something he wasn’t used to seeing while growing up in Florida.

“What got me was the beauty of the place, the power of the place,” he said. “This space has so much history, which you don’t find much in South Florida.”

Ojalvo was born in Caracas, Venezuela, and his parents emigrated to the United States when he was 3. While in high school in Coral Springs, his parents allowed him to apply to just one out-of-state university for financial reasons.

Fortunately, U.Va. offered a financial aid package that made it cheaper for him to attend U.Va. than to stay in Florida.

“If not for scholarship support and AccessUVA, I simply wouldn’t be here,” said Ojalvo, who will graduate May 16 with a double major in English and in political and social thought.

Ojalvo has helped cover his college costs by working part-time during the year, particularly in paid internships at Monticello – the first two summers as a tour guide, then last summer in the development office, where he plans to return this year.

“We talk about Jefferson like he’s still around here today,” he said. “That had a big impact on me when I was looking at schools, and I decided to really delve into it when I got here. I wanted to figure out what all the buzz was about.”

As a guide, Ojalvo enjoyed sharing his knowledge of early republic and Jeffersonian history and then forming relationships, however brief, in which he could pass on this enthusiasm.

Brandon Dillard, a tour supervisor at Monticello, said Ojalvo has a gift for telling stories with “an emotional eloquence that accentuates the human elements of the past.” Numerous times Dillard has witnessed Ojalvo’s guests laughing and crying on tours in response to his enthusiastic storytelling.

Beginning in his first year at U.Va., Ojalvo also honed his skills as a tour guide for the University Guide Service, leading both historical and admissions tours.

Ojalvo knew that at Monticello, staff historians and archaeologists had been researching slavery on the mountain, and that their work had reshaped the tour experience at Jefferson’s home. He invited his contacts at Monticello to teach U.Va. tour guides about the University’s history of slavery and to train them in presenting it to visitors.

His initiative gained momentum, and he eventually became student member on a working group of U.Va. President Teresa A. Sullivan’s Commission on Slavery and the University.

As the University Guides’ outreach chair, Ojalvo also helped to increase the organization’s diversity, connecting with the Black Student Alliance to encourage more African-American students to become guides. Thanks to his efforts, the number of University Guides who identify themselves as black tripled in one year.

Ojalvo said he has experienced his greatest growth as a student in the humanities, studying literature, politics, history, philosophy and art. “The disciplines centered in the humanities have given me a strong foundation that provides stable ground in any context,” he said.

“There’s something about talking to someone and having them assume you are a humanities major, based on your knowledge of various interlocking interests and fields, that is incredibly empowering. You can talk to anyone about just about anything and hold your ground.”

That kind of relationship-building is especially important in the area of fundraising and University advancement, a career Ojalvo plans to pursue in the near future. He felt drawn to development work while working at Monticello when he realized what he liked best about giving tours was connecting with people based on shared interests and passions.

“Giving tours was an opportunity to convey my excitement and my enthusiasm about a place, and working in the area of development gives me the opportunity to share that same excitement in a more sustained, long-term context,” Ojalvo said. “The relationships I’ve fostered in development work can really serve as the driving force to improve a place like U.Va. or Monticello.”

Ojalvo cites as a key course one that he took this semester: “Development and Board Management” in the Arts Administration program, taught by George Sampson, lecturer in the School of Architecture.

Students took in lectures and case studies presented by leaders of the University Advancement office. “We talked about what worked and what didn’t work,” Ojalvo said. “We learned about foundation grants. We heard from a different person each week. It’s been so much fun.”

“Aaron has been truly a delight to have in my class this semester,” Sampson said. “He possesses one of the sharpest minds I have yet encountered in my over 20 years at U.Va. Aaron’s intelligence and exceedingly quick wit are exceptional.”

Ojalvo’s political and social thought thesis examined both the poetry and public role of Allen Ginsberg as central to the emergence of the gay liberation movement in the 1950s and ’60s. He selected three areas of focus: obscenity in American art, progressive social activism and beat poetry, particularly in Ginsberg’s early career.

“Aaron brings a wonderful combination of irrepressible energy, intellectual curiosity and lively humor to all that he does,” said Ojalvo’s adviser, Michael Joseph Smith, Thomas L. Sorenson Professor of Political and Social Thought and associate professor of politics in the Woodrow Wilson Department of Politics. “Every class he is in gains from his presence.

“In his thesis, he combined literary analysis and social history with extraordinary insight and depth – perhaps an ideal example of the kind of interdisciplinary work made possible by our program.”

A central work of literature in Ojalvo’s life has been Ginsberg’s “Howl,” a book of poetry considered scandalous at the time of its 1956 publication by San Francisco’s City Lights Bookstore. “Howl” became the subject of a widely watched obscenity trial, as it depicted homosexual sex at a time when sodomy laws were still on the books in many U.S. states. “Howl” is so much a part of Ojalvo’s life that, in the summer of 2014, he visited San Francisco and City Lights Bookstore to pay homage to Ginsberg’s revolutionary poem.

Beginning this fall, Ojalvo will teach English at an American school in Casablanca, Morocco until June 2016. After that, he hopes to return to Charlottesville to work in fundraising for either U.Va. or Monticello. After all, he knows these two World Heritage sites by heart.

“I have no doubt we will all be hearing much more from Aaron in the years to come,” Smith said.

What Is Biotechnology? Where Is It Headed at UVA? END_OF_DOCUMENT_TOKEN_TO_BE_REPLACED