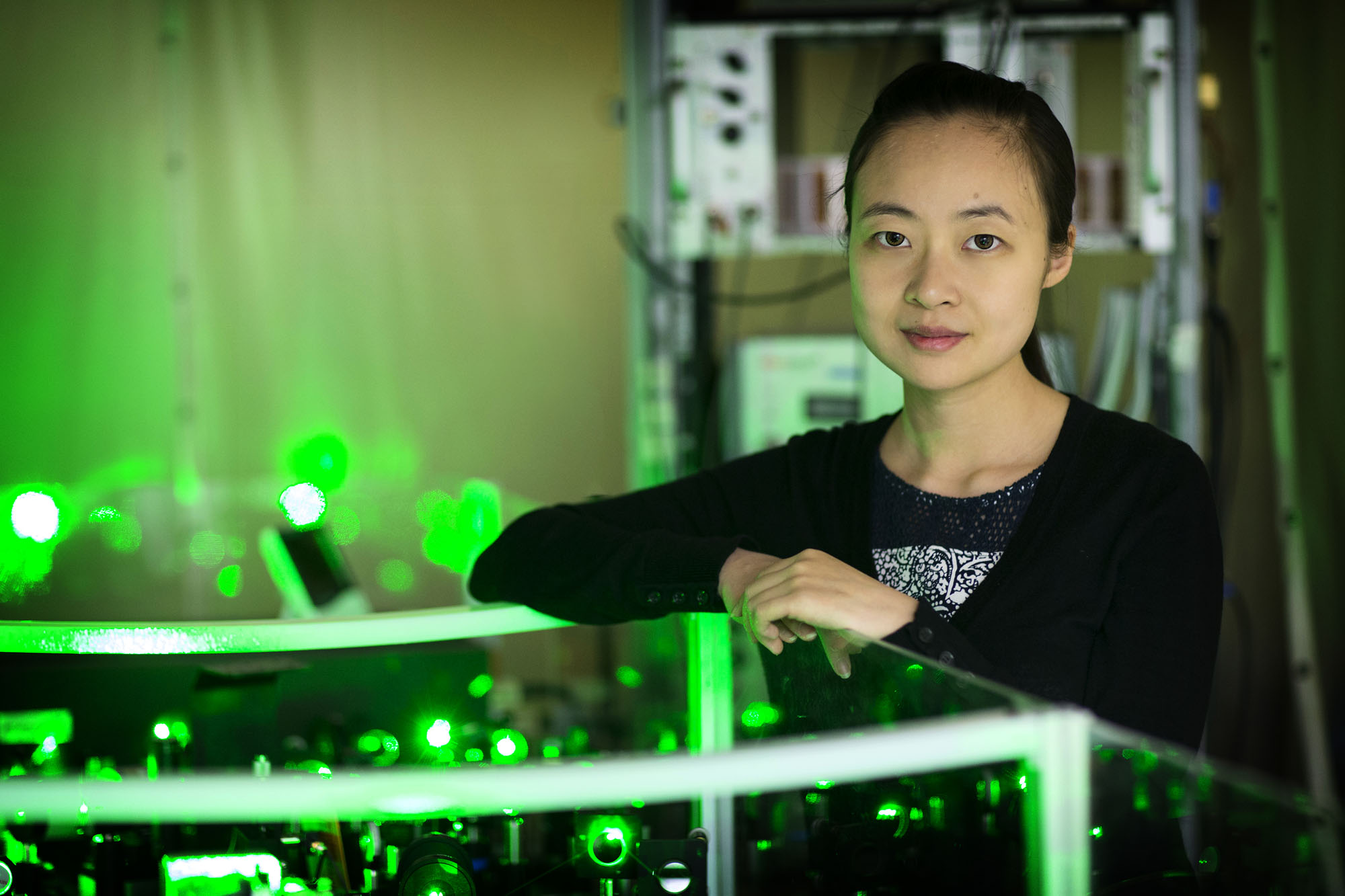 Moran Chen uses lasers to conduct research in an area of physics essential to the possible eventual development of quantum computers.

During Moran Chen’s time as a University of Virginia  physics doctoral student, she helped set a world record in an area of physics that could play a crucial role in giving rise to a prototype quantum computer.

Her paper detailing the achievement won her the 2014 Allan T. Gwathmey Memorial Award, an honor reserved for the most accomplished graduate students in the sciences at U.Va., recognizing a distinguished scholarly publication.

The award-winning project demonstrated a breakthrough in the creation of massive numbers of entangled qubits, measuring 60 of the entanglements – more than ever created whose subsystems are simultaneously available. Hence, a record.  There are probably many thousands of others, but it’s difficult to measure them due to equipment limitations.

What is a qubit? It’s a “bit” of memory, such as used in current digital computers, but one that can have two values at the same time due to a property called “superposition.” A group of qubits can interact and connect in certain ways that make them into “entangled states,” where each qubit is not separable from the rest. All of this could, over time, lead to the development of a quantum computer, a device once considered only a dream, and still likely well off in the future.

A quantum computer would be used to perform highly complex and specific calculations that would greatly exceed the limits of even the most advanced modern supercomputers. Such a computer would be used for everything from modeling biological systems to unraveling the mysteries of quantum mechanics – the very details of the makings of the universe.

“Physics has always been my easiest subject,” said Chen, who will earn her Ph.D. this month. “From a young age I understood the concepts and found them easy to grasp.”

A native of China’s Szechuan province, she said she has found a great deal of support and encouragement among the faculty at U.Va.

“I’ve had a happy experience here, and have enjoyed the constant communication and collaboration with the professors and students,” she said.

Along with setting a new record in a highly challenging and pioneering area of physics, Chen also has served as a volunteer though Madison House’s “Adopt a Grandparent” program. For more than two years, Chen has visited with a woman, now 89, at Golden Living, an elder care center in Charlottesville.

“She is 60 years older than I am, and we’ve become friends,” Chen said. “I have grandparents in China, I miss them, and I thought how lonely and boring it might be to be older and not living at home. I would want companionship and someone to visit and make me happy. So I have done this and I believe it has been helpful to her.”

“Moran has a big brain and an equally large heart,” said her adviser, physics professor Olivier Pfister, who said he regards Chen as possibly the best graduate student with whom he’s ever worked.

Chen also co-founded a student chapter of the Optical Society of America, a professional group in optics and photonics. In her role with the society, she organized activities such as inviting leading scientists to lecture at U.Va., visits to labs at other universities, opportunities to teach physics to young students, and helping to promote optics research and study at the University and in the community.

She says U.Va. was her ideal school, having read, when she was a young girl, of Thomas Jefferson’s founding of the University.

“I realized this university was a very special place, and it became my dream school,” she said. “I feel very lucky to have come here and to work on the projects I’ve had and to associate with the people I’ve known.”

Her next step is to find a job conducting research in lasers or photonics at a company in the U.S. or with a federal agency.

She earned her U.S. citizenship in April, and received the final documentation of that status the day after she defended her Ph.D. dissertation.

“That was a very special two days,” she said.

And she is the mother of Lily, her 3-month-old daughter, who is keeping her as busy as physics ever has. She gets help, though, from her parents and her husband, Jason Buczyna, a physics and astronomy teacher at Albemarle High School who previously earned master’s degrees in astronomy and physics from U.Va.

“This is a very special university. It’s a beautiful campus, it is professionally supportive, and I was able to succeed on a big and very difficult-to-accomplish project,” Chen said. “And my adviser Olivier has been very encouraging and helpful throughout. I’m very grateful.”