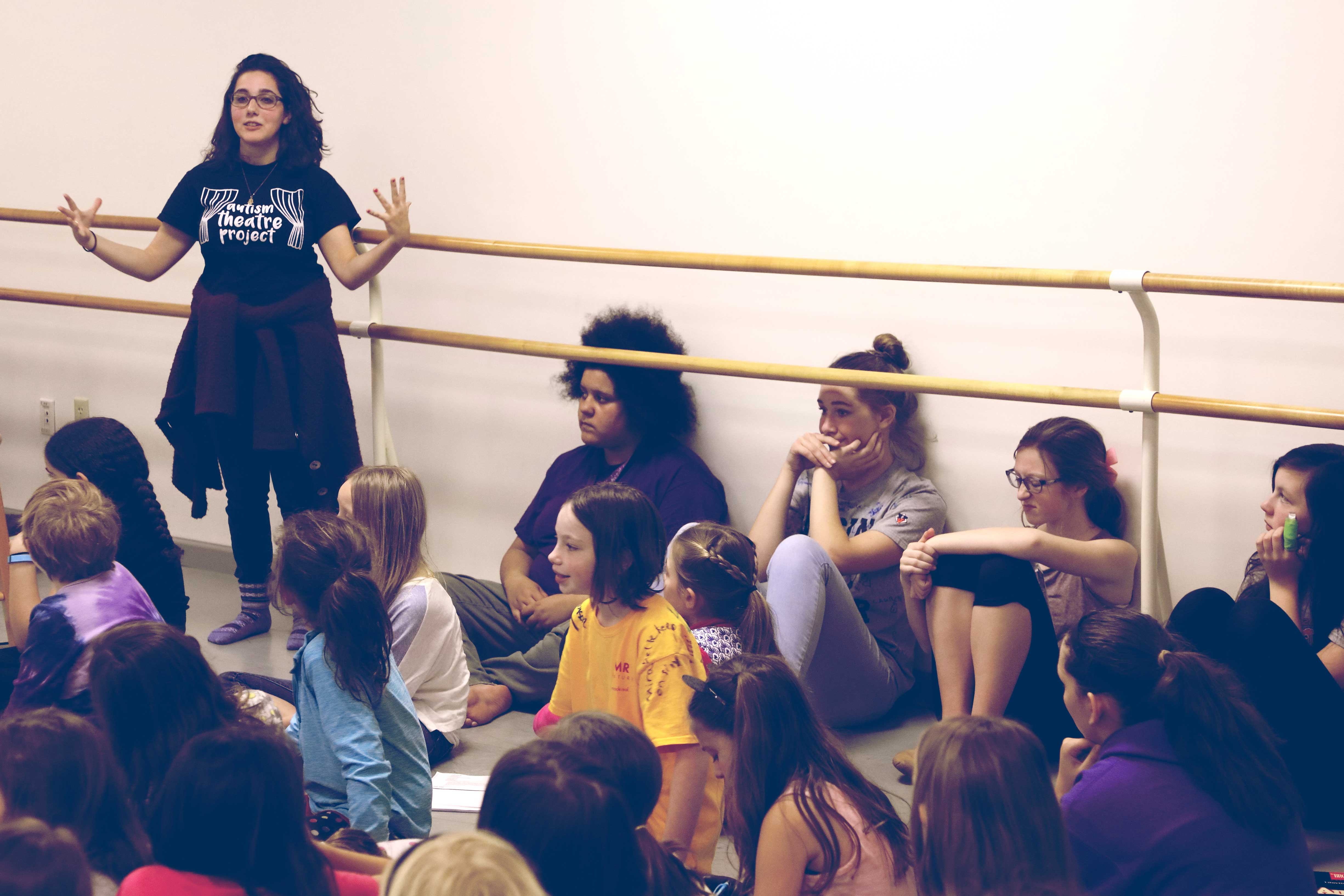 Ana Mendelson leads a training class before a “sensory-friendly” performance for children on the autism spectrum and their families. (Photo by Dan Addison)

In the summer of 2013, Ana Mendelson was working with a young girl in the Charlottesville area who had a developmental disability. One day they tried going to a local movie theater.

“She had a completely overwhelming experience,” Mendelson said.

They tried sitting in different areas.

“In the front row she kept turning around to see what all the other people were doing,” she said. “In the back row, she enjoyed the feeling of pushing on the seat in front of her with her feet. The aisle seemed like the most flexible option.”

The ushers would not allow them to sit in the aisle, however. By this time, audience members were casting disapproving glances their way, so they decided to leave.

This distressing incident provided inspiration for Mendelson, who graduates from the University of Virginia on May 22 with a Bachelor of Science in Education degree in communication disorders from the Curry School of Education and a Bachelor of Arts in psychology from the College of Arts & Sciences.

“Having many fond memories of attending theater with my family, the idea of creating a stigma-free space where all families could enjoy this experience was extremely appealing,” Mendelson said.

Autism-friendly, or sensory-friendly, performances that make live theater more accessible have been expanding on and off-Broadway and at community theaters around the country over the past decade, but had not yet found their way to Charlottesville. After some online research, Mendelson contacted the Theatre Development Fund in New York for guidance on accessibility.

In the spring of 2015, she wrote a successful grant proposal for a UVA Coffelt Public Service Award and founded the Autism Theatre Project. College undergrads Jaclyn Lund, Ashley Houze, Olivia Cosby, Annie Frazier and Madi Lahey worked alongside Mendelson on the project team.

“Ana is amazing,” said Jane Hilton, an assistant professor of speech language pathology in the Curry School and director of clinical services in its Speech-Language-Hearing Center. “She is an exceptional young woman who truly cares about providing sensory-friendly performances to this population.”

Mendelson approached Hilton about the idea, then spearheaded every aspect of the performances, Hilton said.

Last fall, Mendelson’s Autism Theatre Project partnered with DMR Adventures, a local production company, to produce its first autism-friendly performance. It was a musical called “Captain Louie, Jr.,” about a young boy finding the courage to make new friends in his new town.

The production was performed as written, with special accommodations for potential sensory challenges such as jarring sounds or lights. For example, when a sensory surprise was coming up, volunteers held out glow sticks to warn the audience.

Most of the 10 volunteers who assisted at the evening’s performance were either fellow undergraduate and graduate students in the Curry School’s communications disorders program or members of UVA’s chapter of Autism Speaks.

Both the volunteers and actors participated in workshops that Hilton led.

“We train the actors in what the audience members with autism may do during the performance,” she said.

In reaction to their sensitivity to noise or bright lights, some people may yell, cover their ears, or rock back and forth, maybe even run out, she said.

“Not all people with autism will have these reactions, but the actors need to know it may happen during the performance so that they can understand that nothing is wrong and to keep the play going,” Mendelson said.

A quiet room was also available during the show for anyone who needed to take a break. Mendelson even produced a “Coming to the Theater” video to help families prepare for their outing.

The funds she received from the Coffelt Award and other sources went toward royalties and rental costs, enabling DMR Adventures to provide a free performance for the children and their families. It also covered advertising, quiet room supplies and T-shirts for the volunteers.

The event was a success, based on surveys of the 13 families who attended “Captain Louie, Jr.”

“We really enjoyed the performance,” said Charlottesville mother Janice Mills, who brought along her 12-year-old daughter. “Trin cheered at the end of scenes. She loved the group singing the best.”

Trin’s primary diagnosis is Angelman syndrome, with a secondary diagnosis of autism spectrum disorder. They have tried mainstream theater performances in the past, Mills said, and are always challenged by the need for wiggle room.

“We usually sit near an exit where we can go out and come back,” she said.

They found the most helpful features of the “Captain Louis, Jr.” performance to be the floor seating and the quiet room.

“It quickly turned unquiet when Trin found all the UVA girls in there to hang out with,” Mills said. “It was definitely a great sensory break area for her.”

A new crop of students have joined the project and will keep it going.

“In the future, I see Autism Theatre Project as a community-based consulting group that helps theaters put on accessible performances,” Mendelson said. “I hope all Charlottesville-area theaters would be interested in increasing their accessibility.”

After graduation, Mendelson – who also was involved in First Year Players, Challah for Hunger, Phi Sigma Pi honor fraternity and the University Singers, and was a resident adviser and a summer orientation leader – will relocate to New York City to work at the Medicare Rights Center through the Avodah volunteer program.

The Bigger Picture: Starry Night in the Rotunda END_OF_DOCUMENT_TOKEN_TO_BE_REPLACED