Class of 2016: Wu’s Accomplishments Are Launching Pad to Success 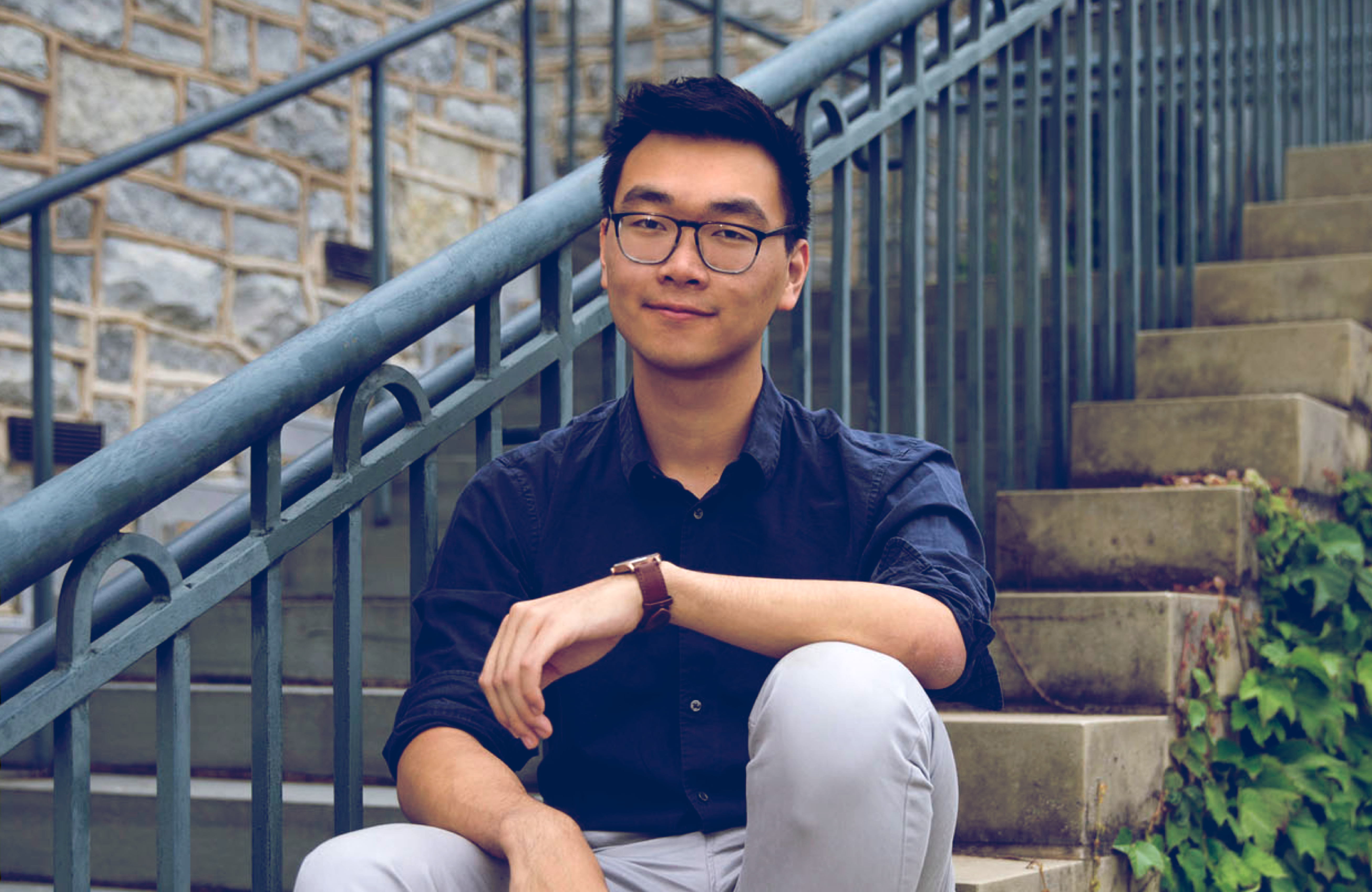 We are young, fearless and just as passionate as you.”

Those words overlay an image of two astronauts blazing through space with jet packs. The image appears on the website for rADical, a student-run advertising agency co-founded by Arthur Wu and his friend, Kelsey Miller.

“Our icon is an astronaut,” Wu said on a recent spring afternoon outside an Elliewood Avenue coffee bar. “We all liked the idea of the space race. You’ve got so many types of people working together toward this one thing that cannot go wrong. Of course, the stakes are not as high as that, but we do like what it symbolizes: a multidisciplinary team working together to do something that has not been achieved before.”

rADical, which employs 25 students from across Grounds, is just one of the big achievements Wu has realized during his four years at UVA. He also runs a long-form blog where he dissects data to analyze social, technological and demographic trends, and he won a competition to be the sole student speaker at this year’s TedxUVA event. He has a passion for design and has been working 20 to 30 hours a week at WillowTree apps.

As he prepares to walk the Lawn later this month to receive a B.S. in commerce and a B.A. in statistics, Wu reflected on his time at UVA with UVA Today.

Q. You co-founded rADical in the spring of your first year. What kind of work do you do?

A. Kelsey and I decided to start it because we had both gotten involved in the start-up communities here and we saw what an integral role good design, marketing and branding had from the get-go. It’s really crucial to start-ups.

One of our projects was for a non-profit leadership camp called Lewis and Clark Leadership. Their marketing director had just left and they entrusted all of their marketing efforts to two 19-year-olds. We had to produce good design across several platforms. We knew what was going to be engaging to both teens and their parents. Knowing how to balance them both was very important. We were able to produce lots of really engaging multi-media, from videos to brochures. It was an integrated campaign to get people to sign up for the camps. We were happy to say that we got enough traction to at least make the camps happen, to the point that they maybe had five campers one year to getting over 100 the next year. To us, it was a great achievement because we loved the clients we were working with; we saw how much passion was going into it. It’s pretty hard to break into the camp market. The best part was the parent testimonials. We had several who were parents of children with learning disabilities and they had a great time. They would not have known about the camp if it weren’t for the marketing.

Q. Alongside running an advertising agency, you’ve managed to participate in several top-level competitions and done quite well. You finished in the top 4 percent globally in a Google Online Marketing Challenge. Tell us about these competitions.

A. My first and second year I did A LOT of case competitions. Google is actually just one of them I did as part of my class with professor and adviser Ahmed Abbasi.

I did a sustainable product development competition put on by Unilever, which is like the European Proctor and Gamble. My team was one of three national finalists.

I also did the Accenture Innovation Challenge. They invited teams of undergraduates to join a consulting case competition for one of their non-profit clients started by Usher, called Usher’s New Look, which made educational and career development programs for high school youth in urban areas. The challenge was, “How do you scale that program to meet the needs in multiple cites without exhausting the resources of the non-profit?” That was second year. A lot of teams from UVA participated and you get randomly assigned to a project and I was randomly assigned with three other women in the [McIntire School of Commerce]. We somehow made it to the national finals, the top three. There were a few hundred teams competing. That was just nuts and because the women on my team were phenomenal, very intelligent people.

Going into these competitions, I like the feeling of actively doing something, even if it’s just for a few weeks.

Q. Speaking of competitions, you won another one this year to become the single undergraduate student speaker at TEDxUVA. Here again, you were surprised to learn that others would be interested in what you had to say. What was that experience like?

A. The biggest thing I learned from that whole experience was being able to step back and reflect on what I’ve learned. I think I and my peers at UVA can get very wrapped up in what we are doing in the moment and don’t have the time to reflect on how much we have personally learned and grown from being here. I credit TED for helping me learn how to do that in a structured way.

The title of my talk was called “How Design Defeats Overload.” I literally spent three hours in front of the bathroom mirror the night before practicing for it. I’m really glad I did it.

Q. With everything else you were doing, you launched a data blog called Phenomenon, which features lengthy thought pieces on things like how to optimize Airbnb. Why did you decide to launch the blog?

A. I started the blog this past fall semester. I got the inspiration from the company I interned for last summer, Palantir. They build software products that allow companies to better integrate and analyze their data. They work with military intelligence and expanded to companies in energy, health care and finance. I saw the amount of different disciplines that data science could touch.

What I was further interested in was thinking about how this approach didn’t necessarily need to stay in a company. I think people can understand data and stats to better inform their own opinions about everyday things.

Phenomenon was also inspired by different data blogs like the New York Times’ The Upshot, that does a lot of cool pieces on things like public policy and education. What Phenomenon aims to do that is different from things like The Upshot is that it would really only focus on things like deep-dive, long-form pieces on specific topics. The idea is to publish just a few pieces a semester – partially because I don’t have as much time as I would like to focus on it.

Topics I’ve focused on in the past were things like public transportation in terms of bike sharing and how did the media mess up the public response to Ebola. Different topics, but pieces that examine tech and consumer behavior.

The blog is an independent study and I got academic credit and guidance from Professor Abbasi, who was a wonderful mentor.

Q. How did you find time to do all of these things and be a student at the same time?

A. I think that when you surround yourself with people who are as passionate about their things as you are about yours, and those two things can coincide, then you make time. It doesn’t feel like work.

I found these sorts of groups at HackCville [a student-run entrepreneurial incubator]. I made some of my closest friends in that organization. Having a communal space like that was really awesome.

I made wonderful friends in McIntire, too, and learned to be humbled by my peers. I learned as much from them as I did my professors. The bonds that you make in that kind of a program, they cannot be overstated.

Q. What is your fondest UVA memory?

A. Definitely singing “The Good Ol’ Song” at Lighting of the Lawn. It’s such a treasured moment. To have all of your friends together in the same place and be together in an atmosphere like that is amazing.

I also want to thank Professor Ryan Nelson. He is the associate dean for the undergraduate program in McIntire and the director of the Center for the Management of Information Technology. I never had him in a classroom atmosphere, but he was a good mentor. He took me and a group of students to San Francisco spring break of my third year to explore start-ups and larger tech companies in the Silicon Valley area. I got to know him really well because that trip was really immersive. He has always been someone I can turn to to talk things through. He was just a really solid role model.

What Is the ‘4th Side’? END_OF_DOCUMENT_TOKEN_TO_BE_REPLACED