Class of 2017: Parents’ Sacrifice Pays Off for Boundary-Breaking Business Student 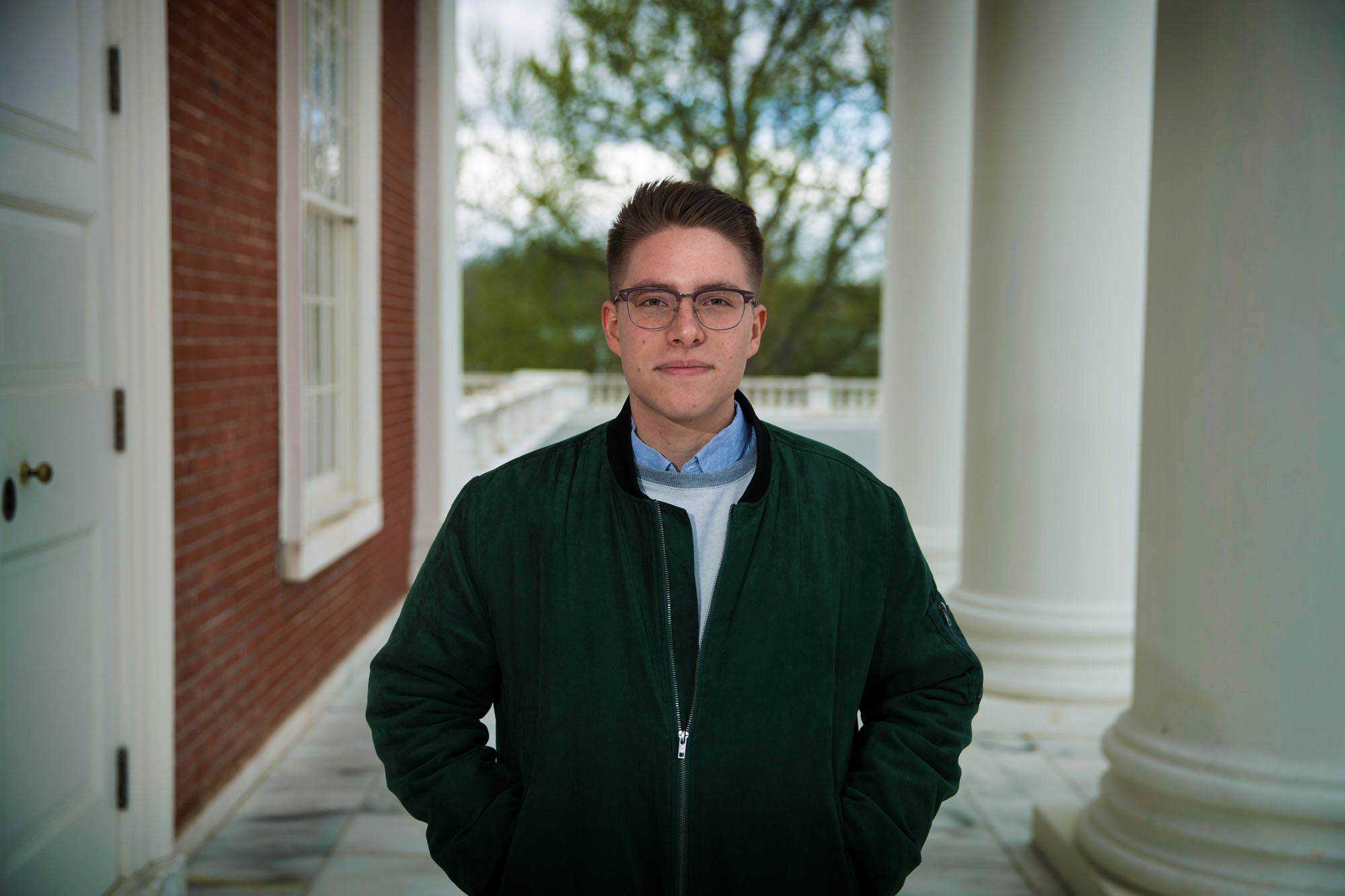 Santiago Naranjo will use his B.S. from the McIntire School of Commerce working at Capital One in McLean. (Photo by Dan Addison, University Communications)

Santiago Naranjo’s early memories of his parents in Florida are searing. He sees his mother’s hands, badly burned from long hours of work hot-gluing plastic flowers to flip-flops. He sees his father’s deeply bruised chest, injured in a fall from a ladder he was using at a painting job.

His mind goes to the time his mother, Luz, worked at a CVS factory. To when his father, Oscar, was a janitor at a Chili’s restaurant, and another time when he worked at a Valpak factory, producing the packs of coupons that find their way to mailboxes around the country.

Naranjo’s parents, now naturalized citizens, moved to Clearwater, Florida, when he was 5. Once owners of a successful chain of bakeries in Medellin, Colombia, the country’s second-largest city, Oscar and Luz came to the United States and entered a seemingly endless series of low-wage jobs to give Naranjo and his older sister a better shot at a good education.

Now, Naranjo is preparing to walk the Lawn as a member of the University of Virginia’s Class of 2017 and take a degree from the elite McIntire School of Commerce. He will use his B.S. working at Capital One in McLean. His time on Grounds has been as eventful and unconventional as his parents’ journey.

Naranjo is a first-generation, low-income student. Those challenges actually made getting to UVA rather uncomplicated; because of his income status, the College Board footed the bill for five college applications. Knowing he wanted to study business, Naranjo then turned to the website of U.S. News and World Report to study business school rankings. There he found McIntire, ranked No. 2 nationally.

“At the bottom of the page, it said UVA met 100 percent of need-based financial aid, so I applied and it ended up being the best value for my education,” he said recently, sitting near the study carrels in the lobby of Alderman Library. “I got a full ride due to my financial status through [the] AccessUVA [financial aid program], so the decision was essentially made for me. I never stepped foot on Grounds before enrolling.”

Since arriving on Grounds, Naranjo has helped forge a path of inclusion on Grounds for low-income students and for fellow members of the LGBTQ community. He came out when he was in high school.

During his second year, the fair-haired Colombian got an email from an upper-class student he knew from the Rainey Academic Program, which helps low-income students transition to UVA. (The program is named for former Rector Gordon Rainey, who helped shape AccessUVA.)

“Ashley Blackwell emailed a bunch of Raineys to be a part of UFUSED, which stands for United for Undergraduate Socioeconomic Diversity,” he said. She had founded the program two years prior and was looking for people to help reinvigorate the group. Naranjo jumped right in, joining the executive board and later ascending to co-president.

“We worked with [UVA] President [Teresa A.] Sullivan’s office to launch the First Generation Initiative, a program where we bring together first-gen college students and faculty members who also were first-generation college students,” he said. The idea is to create connections and give new students role models to help guide them through college.

Naranjo was also co-president and a moderator of PULSE at UVA, a dialogue group that received a Jefferson Trust Grant to support conversations about race, gender, socioeconomic status, sexual orientation and mental health.

These experiences led him to be tapped as an intern for McIntire’s Office for Diversity, Equity and Inclusion. He founded Pride at McIntire as one initiative of that office. The group offers professional and academic opportunities and hosted its first-ever Pride Week at McIntire under Naranjo’s direction this spring.

“I know there has been a sense that being openly gay is in some ways unprofessional and shouldn’t be at the forefront. I wanted to create a group that challenged that,” he said. “Professionalism and one’s sexual orientation don’t have to be opposing forces. They can work in tandem.”

Rebecca Locke Leonard, McIntire’s associate dean for diversity, equity and inclusion, said she was thrilled to be able to secure Naranjo as an intern for the office. “He has been instrumental in helping the office reach and exceed many of the goals we set out to accomplish in our first year,” she said.

Naranjo’s family will be in Charlottesville for Finals Weekend. They will hear the leader of their native country, President Juan Manuel Santos, deliver an address at Valedictory Exercises May 19. Naranjo said hearing the Nobel Peace Prize winner is a fitting end to his time at UVA. “We left Colombia in pursuit of the American Dream and now, having nearly realized it, we are reminded of our home country on such a significant day,” he said. “It’s a full circle, of sorts, for sure.”

Perhaps one of Naranjo’s most affecting moments at UVA came in the form of a Facebook post. Titled “I Cried,” the 13-line poem, posted to the United for Undergraduate Socioeconomic Diversity page in February, has been shared more than 160 times and “liked” nearly 2,000 times. It serves as a countdown to his graduation day.

“Seventeen years ago, I cried because my family moved from Colombia to the United States.

Fifteen years ago, I cried because my dad was a janitor at Chili’s and my mom a factory worker.

Twelve years ago, I cried because my dad cried. He thought he was a failure.

Eight years ago, I cried because my family had to sell our home.

Four years ago, I cried because UVA offered me full need-based financial aid.

Three years ago, I cried because I felt so different from my peers.

Two years ago, I cried because I got my golden ticket out of financial instability. I got into the commerce school.

One year ago, I cried because I had no connections to fall back on when I applied to over a hundred internships and received no offers.

Nine months ago, I cried because I thought my parents’ sacrifices had gone to waste.

Four months ago, I cried because I applied to three companies and got job offers from two of them.

Two months ago, I cried because my parents were able to buy me a new suit from Macy’s without batting an eyelash.

One week ago, I cried because I got my signing bonus for the job I’ll start in the summer. I’ll finally be financially independent.

In two months, my family will cry when I walk down the Lawn and wear the honors of Honor."

How a Single Email Changed a Life END_OF_DOCUMENT_TOKEN_TO_BE_REPLACED

Fall Is in the Air on Grounds END_OF_DOCUMENT_TOKEN_TO_BE_REPLACED

At UVA, There Is a Club for Everyone END_OF_DOCUMENT_TOKEN_TO_BE_REPLACED