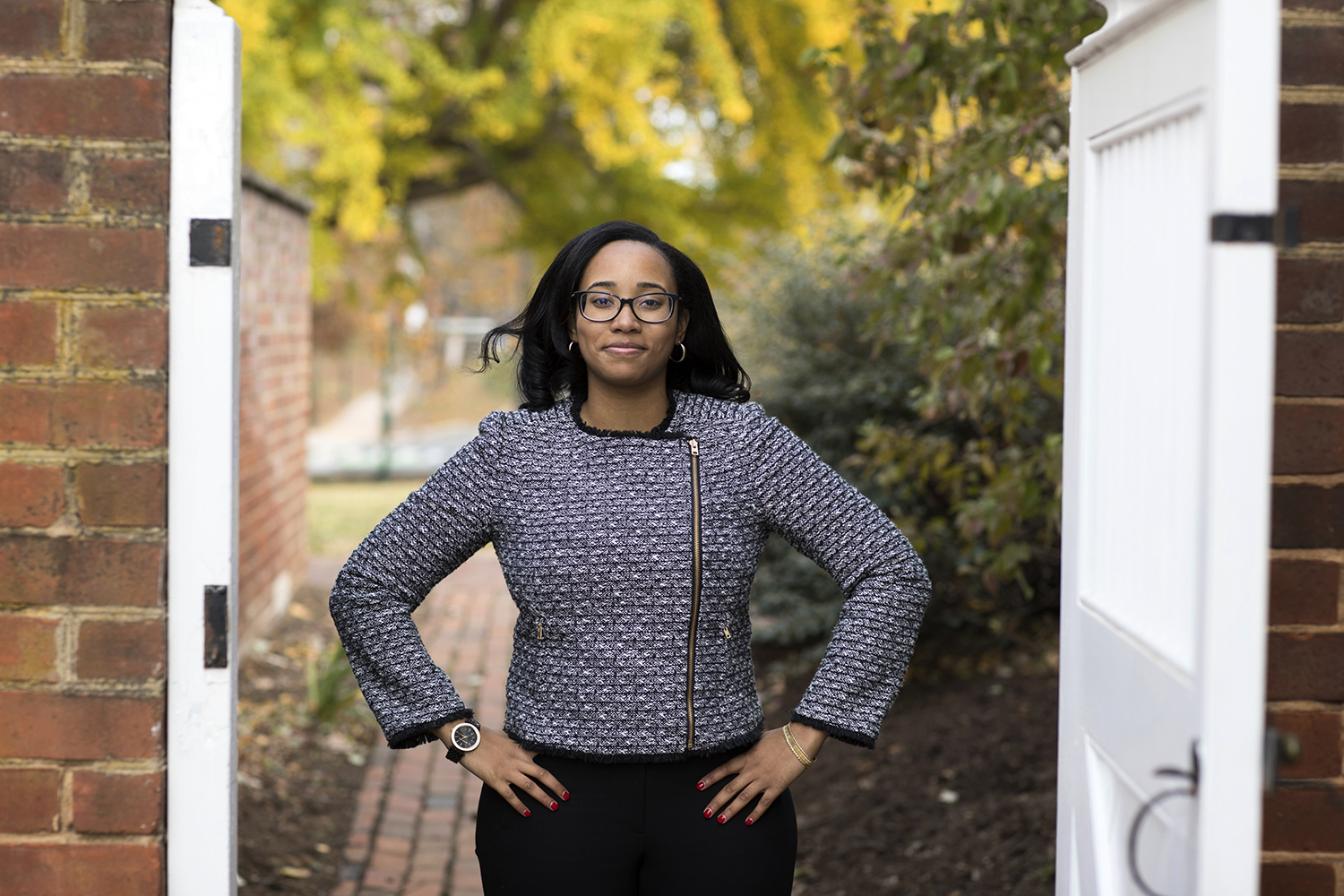 University of Virginia fourth-year student Aryn Frazier has a track record of throwing herself full force into the causes she’s passionate about. It’s a trait that’s helped propel her forward, first as a Jefferson Scholar and student leader at UVA, and now as a new Rhodes Scholar.

It’s also how Frazier found herself living in a self-imposed exile from her Lawn room for a few days in November.

While working as a volunteer for Hillary Clinton’s 2016 presidential campaign, she volunteered her room as a staging area for student volunteers in the final days before the election.

“So for the weekend before the election and that Monday, I ended up sort of homeless for awhile,” she joked.

Rather than idly couch surfing while she waited, Frazier used her accidental self-eviction as a motivation to find quiet spaces on Grounds where she could hunker down and finish her law school applications.

Her hard work paid off; she’s now choosing between several prominent law schools. After selecting one, Frazier will defer for two years while carrying out her Rhodes Scholarship at the University of Oxford.

She’s long been interested in the intricacies of the American legal and political landscape and said she looks forward to gaining new perspectives when she begins her studies in the United Kingdom. She hopes that the view from across the pond might open her eyes to outside understandings of her home country and its politicals.

Frazier will pursue a master’s in philosophy in comparative government while abroad, further building on topics that fascinated her as an undergraduate.

“My thesis at UVA is on jury nullification; more specifically, it argues that we should encourage jury independence as a way to create better, more civically engaged citizens,” Frazier said.

Jury nullification refers to a jury’s refusal to apply the law as written. It usually occurs either because the result dictated by statute is contrary to the jurors’ sense of justice or because the jurors want to send a message on a social issue that has ramifications beyond the case itself.

It’s a topic that caught Frazier’s interest while she was researching how Americans of different races view national issues differently.

As part of her research, Frazier came across anecdotal stories from prosecutors in the Bronx and other areas where juries are usually made up primarily of members of minority groups.

“The prosecutors in those offices tend to say that their jurors hold them to a very high standard, which forces them to do their job more rigorously to prove guilt beyond a reasonable doubt,” Frazier said. “That got me thinking about the power of juries and eventually brought my thesis around to Aristotle’s idea of the good citizen: a deliberative, reasonable person who is enthusiastically engaged with their civic duties.”

Many of Frazier’s mentors at UVA point out that the Aristotelian ideal of good citizenship resonates far beyond her thesis.

“Since her arrival at UVA, Aryn has been an exemplary model of academic excellence and student leadership. She is confident, tough under pressure, ethical and willing to engage in critical reflection,” said Claudrena Harold, an associate professor of African-American and African studies and history who has worked closely with Frazier during her time at UVA.

Frazier spent her second and third years guiding new students through their first year of college as a resident adviser and later a senior resident. She’s also been an active member of the Black Student Alliance throughout her time at UVA, serving first as the organization’s political action chair and then as its president during her third year.

“As her professor and as the faculty adviser of the Black Student Alliance during her time as president, I was impressed with Aryn’s fortitude, her willingness to take difficult stands, her sound decision-making skills and her ability to create consensus among different groups,” Harold said.

Frazier’s work helping others and learning how to tackle the causes she cares about most at UVA has given her an idea of what kind of career she’d eventually like to pursue.

“I’m interested broadly in criminal justice reform and constitutional law,” she said. “I think I would enjoy working as either a public defender or prosecutor somewhere down the road.”

Until then, Frazier is looking forward to her final days on Grounds before graduation and has a few words of wisdom to offer those who will follow in her footsteps.

“I would say to them that people sometimes get caught up on what a UVA student is supposed to be, or what UVA is supposed to be for everyone,” she said. “It’s important for younger students to know that you don’t need, and you’re not going to have, 16,000 undergraduate friends. But there are a lot of smaller communities in the UVA community. You should find yours, as opposed to trying to find them all.”

Monkeypox Is Spreading, But University’s Risk Believed To Be Low END_OF_DOCUMENT_TOKEN_TO_BE_REPLACED

Q&A: Assessing the Risks and Rewards of Pelosi’s Plan to Visit Taiwan END_OF_DOCUMENT_TOKEN_TO_BE_REPLACED

These Giant Wind Turbines, Inspired by Palm Trees, May Be the Future of Renewable Energy END_OF_DOCUMENT_TOKEN_TO_BE_REPLACED