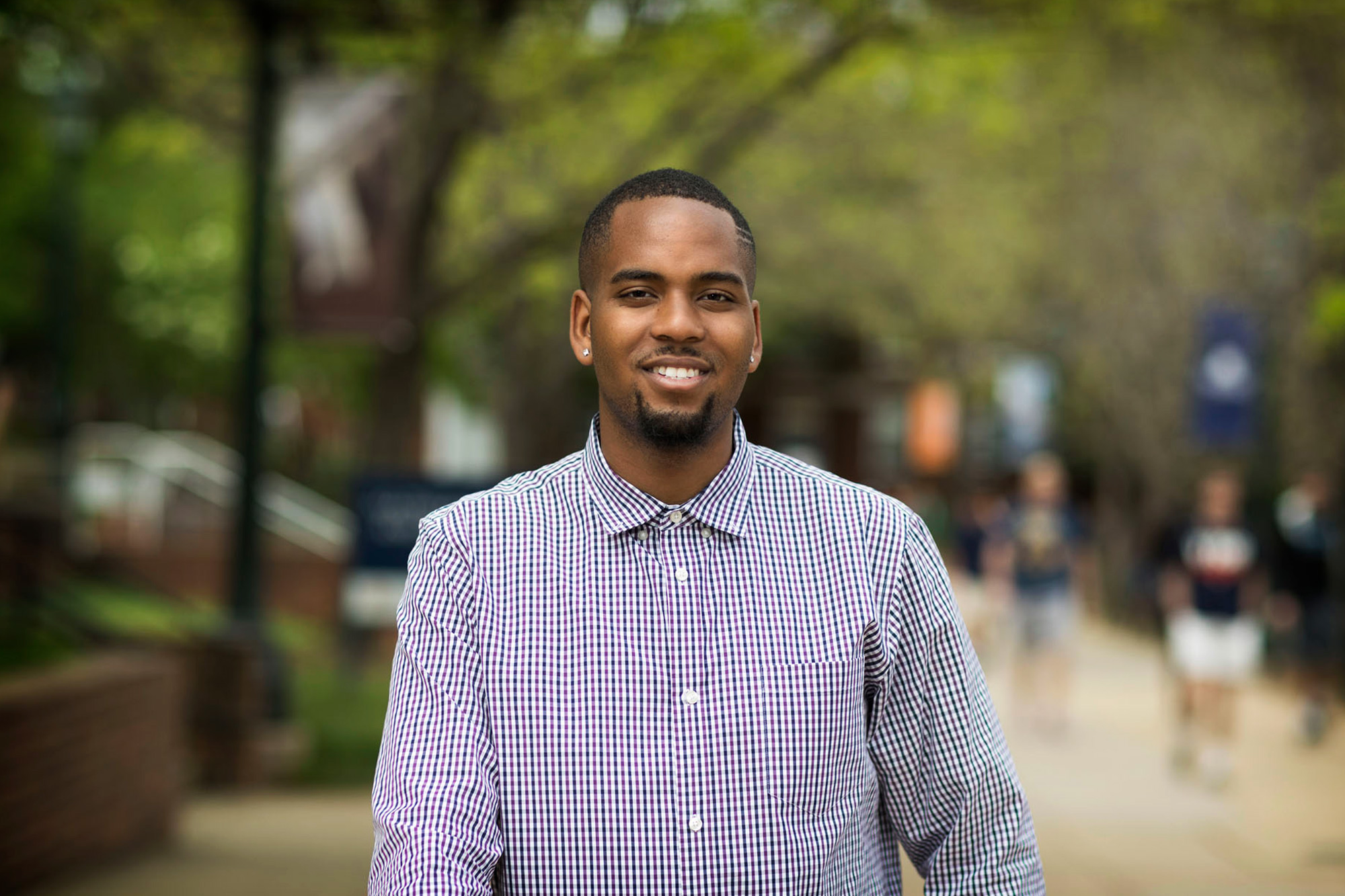 An early affinity for math and science evolved into a focus on engineering for Darius Carter, who is working to inspire more African-Americans to follow in his footsteps. (Photo by Dan Addison, University Communications)

Darius Carter was in middle school when he discovered something that would allow him to focus on his best-loved school subjects, math and science. An engineering summer camp taught him how he could apply those skills to projects like building robots and model airplanes.

He did not know what specific field he would choose, but he knew right then that he would pursue engineering.

“I’m a very social person, so it was fun, and I liked the competitiveness of it,” he said. “You have to push yourself to be better than everyone else.”

From there, Carter followed a path that’s crucial for nurturing young students to choose science, technology, engineering and mathematics for higher education and careers, a path featuring multiple opportunities to engage in STEM learning activities and interact with others who have been successful.

He was accepted into the engineering program at Highland Springs High School in Henrico County, where one of his favorite teachers was a retired engineer who taught calculus.

“He was a really great guy,” Carter said. “He saw that I liked to be creative, and that motivated me.”

Carter also got involved right away in organizations such as the Technology Students Association, which organizes regional, state and national engineering competitions. The National Society of Black Engineers’ Richmond chapter provided mentorship and leadership opportunities for Carter and other high school students and opened their eyes to future possibilities. The group met every other week to do SAT preparation and group projects.

“The biggest part of that was when we went to the national convention, we got a chance to go to the career fairs,” he said. “As a high school student, visiting the companies and seeing the job opportunities, then talking to the colleges about what it was like on college campuses, and seeing all the black engineers, that really made it seem possible.

“A lot of people, when I said I wanted to be an engineer, they would say, ‘Are you sure you want to do that? It might be really hard.’ Seeing people making it and enjoying what they were doing and all the cool things they got to do in their careers made it all worth it to me.”

When it came time to decide on a university, he received an offer of admission to UVA’s School of Engineering and Applied Science, among other schools. As he was trying to choose, Carter found himself swayed by attending UVA’s Spring Fling event (for prospective African-American students) and Days on the Lawn, an open house for all students offered admission.

“My biggest curiosity was what the black community was like here, but I really felt at home, and the people I met here were really great,” he said. “I liked the attitude of the current students: ‘You’re going to go here and excel.’”

Before starting his first semester, Carter attended the Engineering School’s Bridge program, an orientation for students traditionally underrepresented in engineering. The program helped him get familiar with Grounds, with first-year routines and with the life he was about to experience in UVA’s Engineering School.

“It’s a really important program,” he said. “I made my first friend group, got an opportunity to do some preparatory work, and got some wisdom, like don’t wear your lanyard on your neck or people will know you’re a first-year, and don’t come here thinking it’s high school.”

In other words, students have to start taking responsibility immediately for their own performance, although faculty members are keeping an eye out for them.

“If I miss two classes, my teachers will say, ‘Darius, are you OK?” he said. “They don’t hold your hand, but they care. They notice if you’re not around or not doing alright. UVA has faculty who are both passionate about their research and passionate about teaching. I think it’s just that UVA built an environment in which this is expected.

“And the professors are not just researchers or teachers, they’re leading these students. They’re giving the students this knowledge and also learning from the students.”

Mentorship and modeling success have remained important to Carter throughout his four years at UVA. He played tuba in the Cavalier Marching Band during his second and third years and joined the Iota Beta chapter of Alpha Phi Alpha fraternity, whose members visit Charlottesville’s Clark Elementary School every Friday to mentor younger students. He has remained active in the National Society of Black Engineers, serving in chapter and state leadership roles.

“Increasing the number of black engineers and increasing the retention rates are big goals,” he said. “Diversity is very important for engineering, especially because having diverse mindsets helps teamwork and problem-solving.”

He has helped tutor other engineering students over the past two years, and has served as a peer adviser for the UVA Office of African-American Affairs. This year, he has served as a fourth-year trustee.

During his first year, when it was time to choose a major, mechanical engineering rose to the top for a student who has always loved hands-on projects.

He quickly discovered UVA Engineering’s heavy emphasis on providing undergraduates with research opportunities; all of the school’s students must complete a fourth-year capstone project that requires them to demonstrate analysis and judgment through research.

He participated in a Research Experience for Undergraduates program with engineering professor Hilary Bart-Smith, studying how dolphins propel themselves through the water in a quest to develop new, high-performance propulsion methods for underwater vehicles.

After that, Carter reached out to professor Eric Loth, chair of the Mechanical and Aerospace Engineering Department, to find out whether Loth had a space for another undergraduate researcher. Loth did, and Carter has been working in his lab to study a spray polymer applied to the leading edges of metal airplane wings to repel insects and other contaminants that stick to wings in flight and cause excess drag. The goal is to increase airplane fuel efficiency.

They’ve designed a testing apparatus that uses compressed air to shoot fruit flies onto a test wing surface, which also can be heated to simulate summer flight conditions. The research is highlighted in UVA Engineering’s 2017 undergraduate research journal, The Spectra. They plan to write a journal article and present their findings at a national conference next fall.

“Our test data will show how our coating compares to others, and look in depth at all the factors that make this coating really good,” Carter said.

He’s decided to pursue a doctoral degree in the lab of another UVA Engineering graduate, Mechanical and Aerospace Engineering professor Daniel Quinn. Quinn earned his aerospace engineering degree at UVA in 2006, then earned his Ph.D. at Princeton before coming back to UVA as a faculty member last fall.

“UVA is really good at making sure that whatever you want to do, you have the opportunity to do here,” Carter said. “They’ll find the money, the experience or opportunity for you to do it here.”