Class of 2018: Couple Navigates From Theater to Med School. Now for Act 3 … 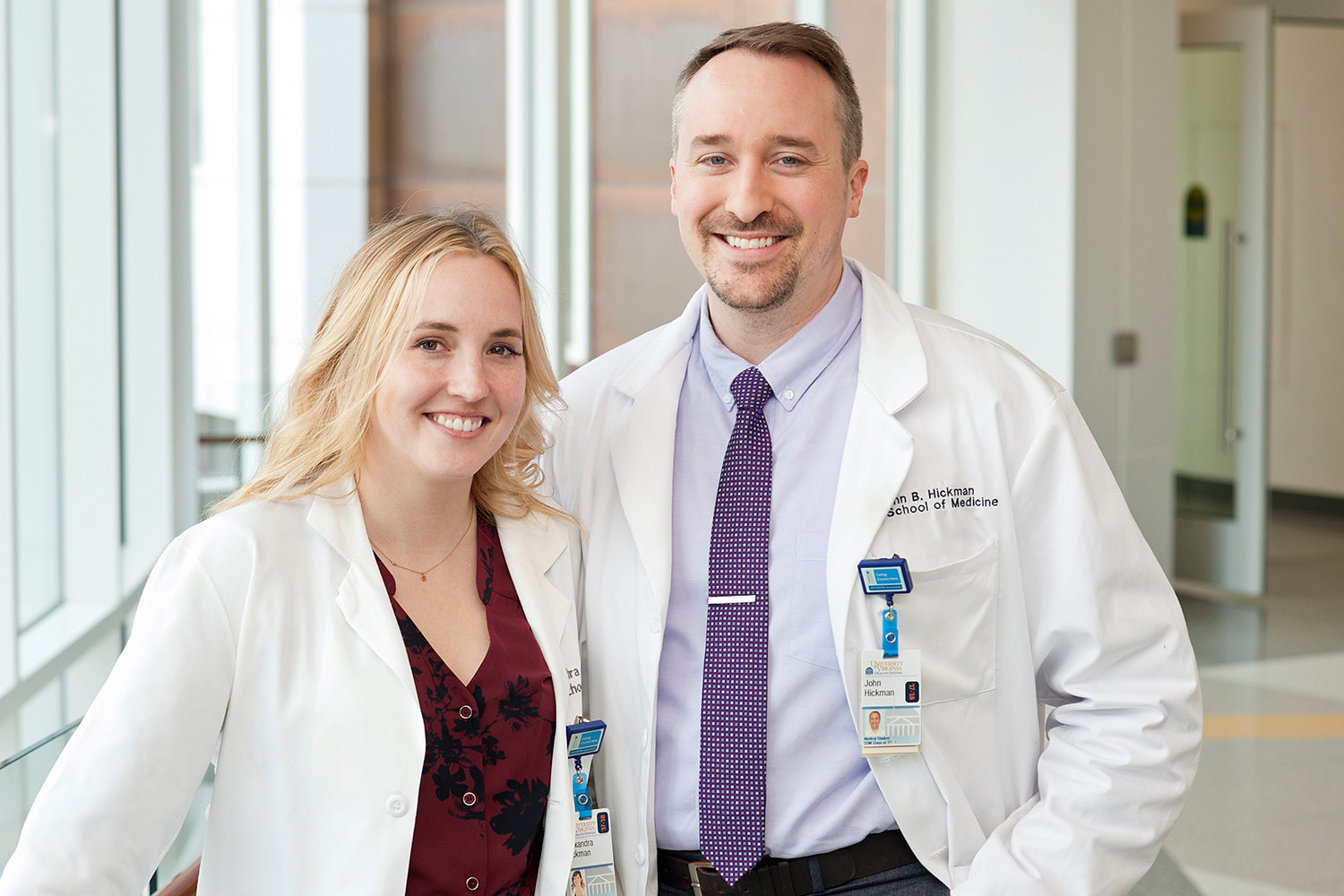 Alex Hickman, left, was the first to shift focus from theater to medicine. But John soon followed, and they agree that the skills used onstage translate well into their new careers. (UVA Health System photo)

Students in the University of Virginia School of Medicine come from a variety of life experiences, but it’s pretty safe to say that not many are married veterans of the theater who juggle their studies with parenting.

Alex and John Hickman will earn their Doctor of Medicine degrees in May. They met as undergraduate theater majors at Northwestern University and married seven years ago.

They recently took some time to talk about their path to med school, how theater makes them better doctors and where they’re headed next.

Q. Before coming to medical school, you were both professional actors?

Alex: I worked [with the comedy group at] Second City, John did Broadway. At Second City, I did a lot of training and was part of a small team learning how to do improv comedy. It’s a big scene in Chicago.

When I was working as an actor there, that’s how I spent a lot of my time. Aside from Second City, I performed in a lot of small theaters and, honestly, some really awful jobs. I also did some musical performances. When we moved to New York, that’s when I started doing some off-Broadway shows, Shakespeare mostly.

John: I started performing in Chicago, doing local stuff, like at the Chicago Shakespeare Theater and the Marriot Theater. Eventually, I was cast in the second national tour of “Jersey Boys.” It’s the story of Frankie Valli and The Four Seasons.

I was a “swing” in the show. [According to Wikipedia, “in musical theater, the term swing is often used for a member of the company who understudies several chorus and/or dancing roles. If an understudy fills in for a lead role, a swing acts the parts normally performed by the understudy.”] I did that in San Francisco and Chicago, and then moved on to the New York company. I got to cover the roles of Bob Gaudio, Nick Massey the bass player – I even played the mob boss and wore a terrible wig. I played a lot of roles in the show.

Q. Did you like performing? What was your favorite aspect of being on stage?

John: Absolutely. I always look fondly back on my time doing it. We got to do things you would never get to do otherwise. Perform national anthems for all the sports teams you could possibly imagine.

Alex: John was on the Emmys.

John: The Emmys. The Tonys. On stage, performing.

Alex: He was with “Jersey Boys” when it was really taking off. At the time, it was a sensation in New York City, so there were opportunities that went along with that. Meeting celebrities and such. It was a cool time to be a part of that.

John: It was a lot of fun. It’s got its ups and downs, like anything else. You are people’s holiday. You are their weekends, their celebrations. We did eight shows a week. As such, you have a very different schedule than the rest of the world. I was on Broadway for 3 1/2 years and with the show for 4 1/2 years. It’s a different schedule and can be difficult in its own way. But not quite like medical school!

Alex: I performed mostly on the weekend. I played more of the out-of-work actor, compared to John, who worked quite a bit ever since we graduated. My projects would start and end within a certain time frame. Thursday through Sunday performances for a month or so, and then it would close.

One of the funny things John did, and I’ll bring it up because he doesn’t want to: John was in the TV version of “Gifted Hands,” a movie about [physician, politician and current Secretary of Housing and Urban Development] Ben Carson.

Ever since the election, it has gotten a lot of air time. John plays the part of Ben Carson’s teacher – John gave “Ben” his first look through a microscope when he’s a little kid. It was a small part, but it’s funny because we get these residual checks for, like, $3.98.

John: I’ve definitely gotten a check for $1. Not quite enough to pay for medical school.

Q. How did you meet?

Alex: We met at Northwestern my first year. John is a year ahead of me, and we lived in the same dorm, down the hall from each other. We started dating a month after we met, 13ish years ago, and got married seven years ago. And we have a baby, Elliot, who is now 2 years old.

Q. What’s it like, juggling marriage, a baby, and medical school?

John: Med school is not designed for marriage and babies.

Alex: It is insanity. I always say: If we make it out the front door of our house wearing pants every day, it’s a win.

Q. Are you performing now anywhere?

John: No, not really. We did a couple of stints in the med school talent show, but after the baby arrived, that faded.

Alex: Until Ellie can shake a tambourine, we’re going to hold off on performing.

John: Yeah, she can sit on stage with a rattle or something. She can’t keep time very well, but that’s OK!

Q. Match Day is coming up, and I imagine this is a nerve-wracking week. Where are you hoping to match?

John: Which means I am not the rate-limiting factor in this equation.

Alex: What are you saying, John?

John: Dermatology is very competitive. It is one of the most competitive specialties.

Alex: As a couple, Match Day is complicated. Especially since, for dermatology, I have to match for my intern year, plus the dermatology residency. We’re essentially managing three different residency applications, trying to make sure we end up in the same spot. It’s a lot to handle. We’re definitely in need of a vacation.

John: I’m a little biased, but Alex is an excellent candidate for dermatology.

Alex: So is John [for internal medicine].

John: Alex started a year ahead of me here at the School of Medicine. But when we had the baby, she took a year off for research, which bolsters her already-strong application.

[Post-interview update: Alex and John matched to the dermatology and internal medicine programs, respectively, at Barnes-Jewish Hospital, the teaching hospital for Washington University School of Medicine in St. Louis.]

Q. Do you have plans on incorporating skills from your previous life into your practice?

Alex: I’ve been really pleasantly surprised at how improv translates to medicine. So much of being a doctor is about being comfortable in uncomfortable situations – and being able to listen to the person in front of you. That sort of training has really prepared me for whatever is in front of us.

As Alex said, the “hearing people” aspect has been beneficial.

I’ve started to get involved a little bit in using improv for how scientists communicate their science. Using the tenets of improv, the sort of, “yes, and …” philosophy, to get out of the script we have in our own head. This works well, especially during difficult conversations, like when addressing end-of-life care. This helps you try and meet people where they are at, so you can reach a common goal together.

I don’t know if it’ll be Patch Adams song-and-dance numbers, but it’ll be interwoven into our practice.

Q. What made you want to become a doctor?

Alex: John copied me! I wanted to be a doctor first.

My defining moment was when we were living in Manhattan. I was taking the train into the city. The girl sitting next to me had a huge seizure, a grand mal seizure. We were under the East River when it happened and there was very little we could do. A resident rushed up from the back of the train and got the woman stabilized. It was one of those moments when I thought, “What can I do for this person?” I mean, I could do a great Shakespeare monologue, but that’s not going to help her.

We had taken arts classes, so in order to apply to medical school, I had to do more work through a post-baccalaureate program at Columbia. While there, I started doing volunteer work at Memorial Sloan Kettering. John had just finished “Jersey Boys” and had some time off, so he also started volunteering at the hospital for special surgery.

Alex: Our poor kids! It’ll be nothing but doctor talk around the dining room table.

John: I had been heading toward medicine for a long time, but then veered off toward the performing arts. Medical school was really about coming back on track. Even though it hadn’t been my original plan.

I’d been missing something while doing theater. I loved the connection with people. There is nothing like the connection between a physician and a patient. I missed the science of it and using my brain. Plus, post-baccalaureate programs are so much fun! [Laughs.]

While volunteering, I was able to see amazing surgeries and was around patients. I worked in the family atrium, guiding families through the recovery and post-op processes. It was then that I felt, “This is what I need to do.”

Q. What made you choose UVA?

John: I grew up in Lynchburg, just down the road. So, I was familiar with UVA from being in the area. We certainly knew of its stellar reputation as an institution. That had a lot of appeal. And: We’re not in our 20s anymore.

Alex: We were thinking about raising a family. And because it really does take a village, when you’re trying to balance so many things – having John’s family close by meant planning a family could be possible. Or at least easier.

John: It was a combination of the great training we could get here, plus it’s a beautiful place. My brother is a professional musician and travels all over the world playing. Charlottesville is one of his all-time favorite spots. He spoke highly of it.

Alex: I think it would be my first night on call, in my third-year clerkship. I was on the neurosurgery rotation and I got to put a burr hole in someone’s skull, to relieve intracranial pressure. I remember thinking, “I guess I’m going to be a doctor now.”

John: At the risk of sounding hackneyed, I guess it was the first time a patient considered me their doctor. During my internal med rotation, I connected with some of our patients and their families. I was always mindful to say, “I’m just a medical student. I am not a physician.” They knew I wasn’t their doctor, I kept reminding them and telling them, but they said, “As far as we were concerned, you’re our doctor.” That was a pretty special moment.

How a Single Email Changed a Life END_OF_DOCUMENT_TOKEN_TO_BE_REPLACED

Fall Is in the Air on Grounds END_OF_DOCUMENT_TOKEN_TO_BE_REPLACED

At UVA, There Is a Club for Everyone END_OF_DOCUMENT_TOKEN_TO_BE_REPLACED