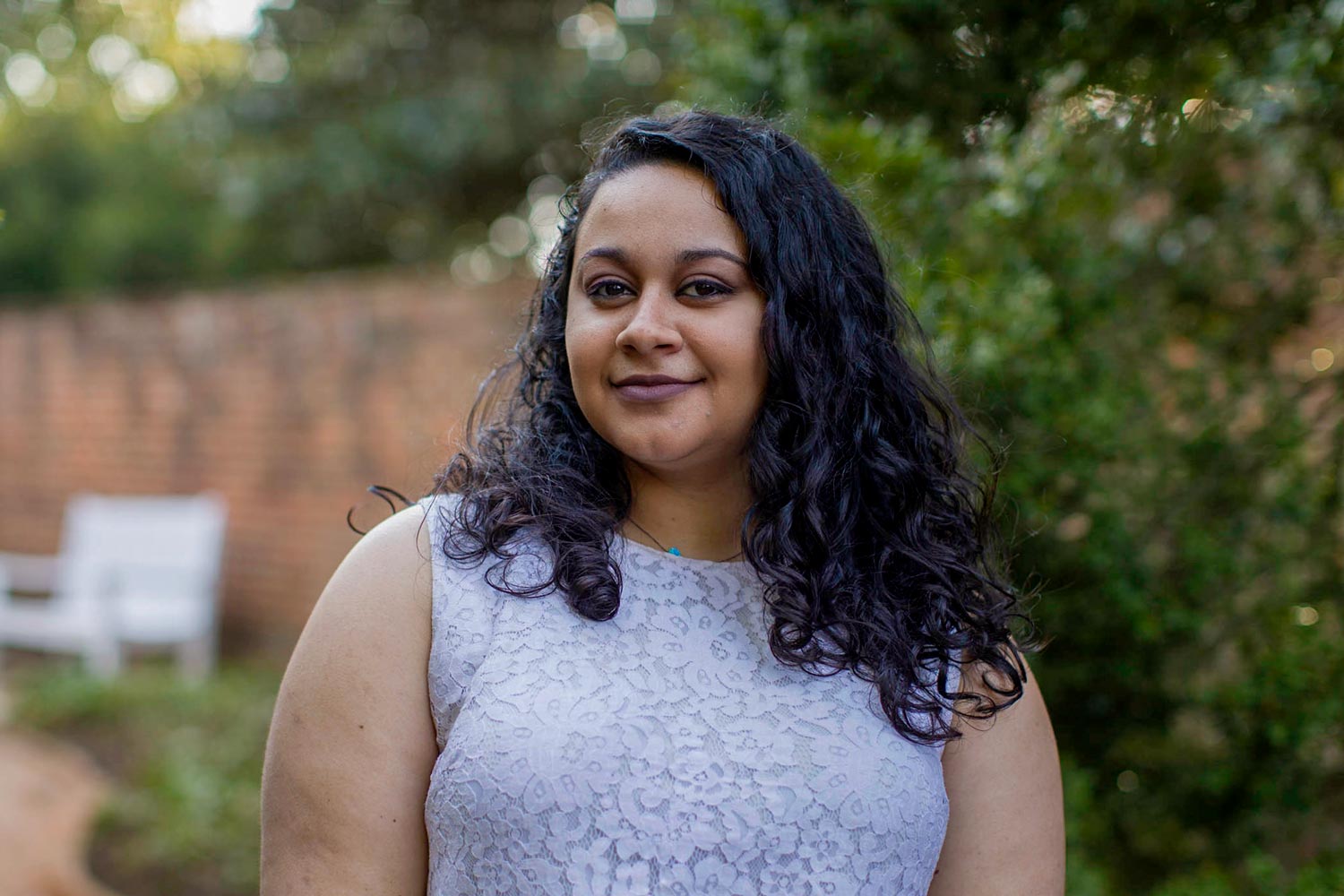 Diane D’Costa’s resume is single-spaced to fit in all she has done at UVA. Highlights include membership in class council and the University Guide Service. (Photo by Richard Dizon, University Communications)

Fourth-year student Diane D’Costa was settling into her new room on the University of Virginia’s historic Lawn in August when torches suddenly illuminated the night sky.

Peering through her locked door’s peephole, D’Costa – a Jewish woman of color – watched in wide-eyed disbelief as the now-infamous scene unfolded in front of her: hate-filled white supremacists streaming up the Lawn, then demonstrating on the plaza of the Rotunda.

“It has fundamentally changed everything,” she said of that night.

“I didn’t want my fourth year to be derailed or defined by people who wanted to inject hate in our community. But that being said, I found a visceral need to be an advocate for communities that are under that kind of hate,” she said.

D’Costa took to the stage on the muggy evening of Aug. 22 at UVA’s McIntire Amphitheatre to share her experience with rallygoers assembled to condemn the white supremacists.

Speaking recently, D’Costa said, “It is a point of education” and nothing will change if people do not talk about it.

That determination will serve this member of the Class of 2018 well in June, when she leaves for Tulsa, Oklahoma, and a two-year stint with Teach for America.

For D’Costa, who is double majoring in public policy and youth and social innovation, policy and education form a perfect marriage. “The more that I studied policy and how we get things done for our society, the more I realized that all begins with education,” she said.

That realization led her to take an introductory course in youth and social innovation, which Robert Pianta, the dean of the Curry School of Education, taught that semester.

“Dean Pianta is my role model,” she said brightly. “He’s made such an impact with his research. He was a large reason why I pursued the youth and social innovation major.”

She said she earned her policy chops from Paul Martin in the Frank Batten School of Leadership and Public Policy. “Paul Martin is such a dude. I think I’ve learned the most from his class, in terms of how to think about policymaking and how to navigate the institutions and context of policy.”

D’Costa will teach high school social studies in Tulsa. She was deliberate in choosing to go there, “because it’s one of the priority regions.”

“I am really interested in using those two years or more in the classroom to really understand the issues facing low-income communities in regard to public education,” she said. “I have the theoretical side of things. I have the practical policy skills. But I don’t know as much about the issues facing the communities directly and what it’s like to be in the communities with that state of education. So I’m really excited to go and really learn as much as possible.”

How a Single Email Changed a Life END_OF_DOCUMENT_TOKEN_TO_BE_REPLACED

Fall Is in the Air on Grounds END_OF_DOCUMENT_TOKEN_TO_BE_REPLACED

At UVA, There Is a Club for Everyone END_OF_DOCUMENT_TOKEN_TO_BE_REPLACED